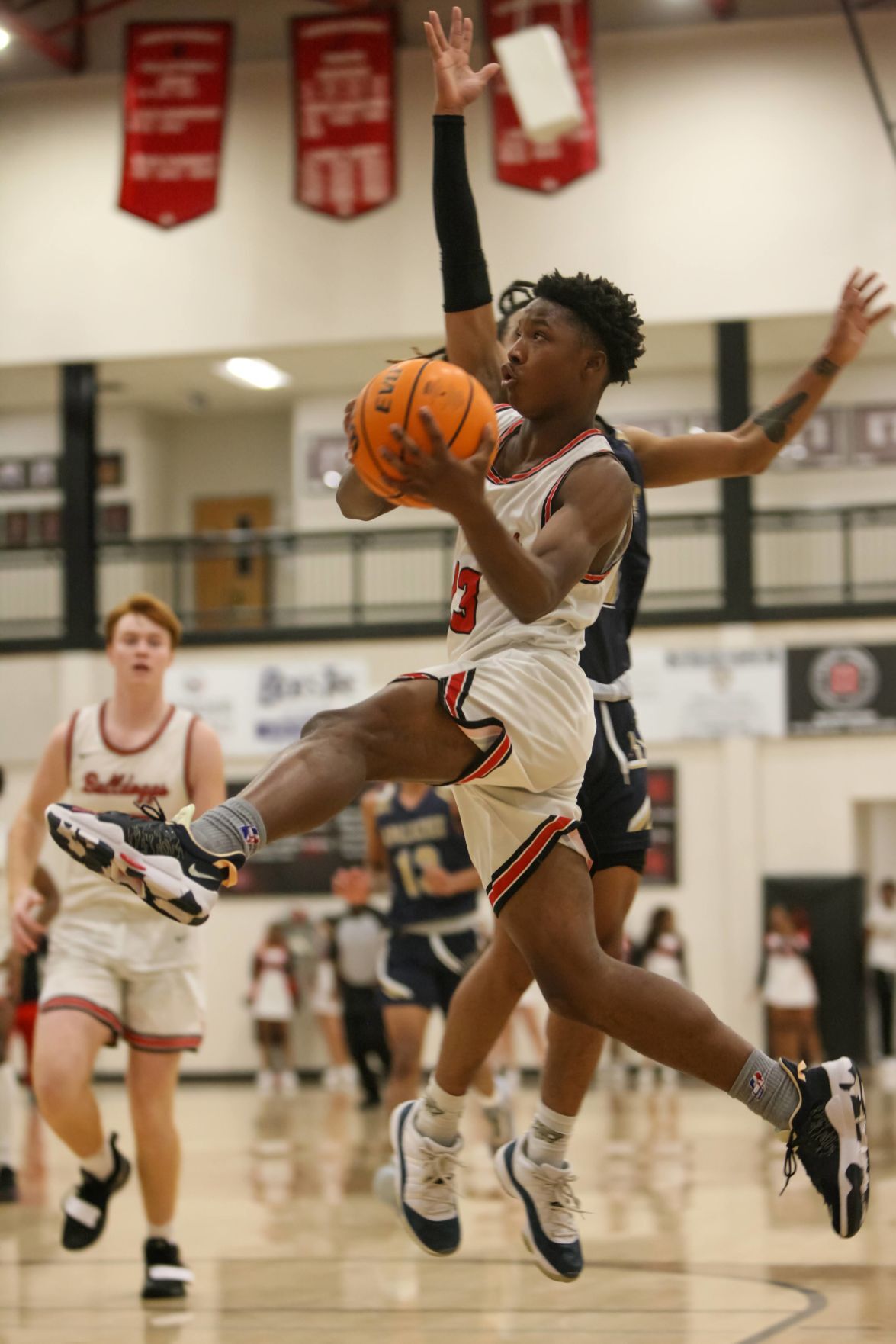 Brian Arnold soars for a layup Saturday (Dec. 18) against Apalachee. 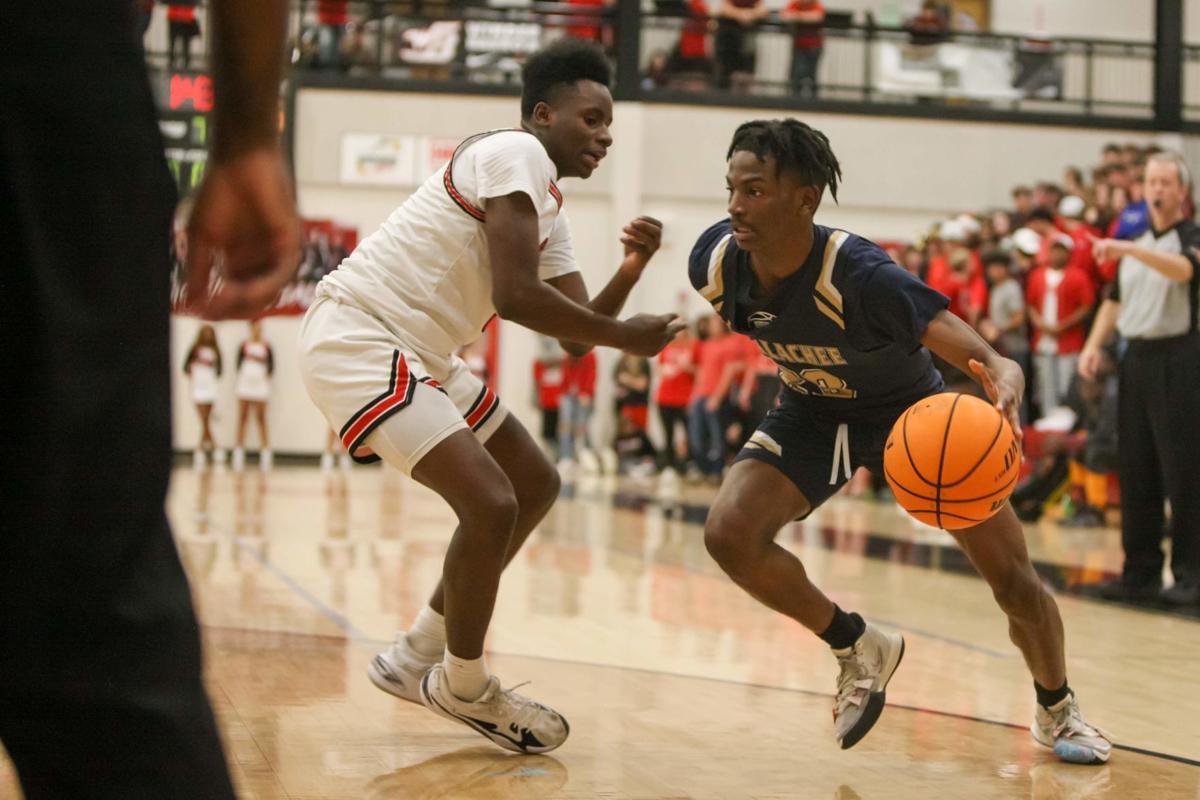 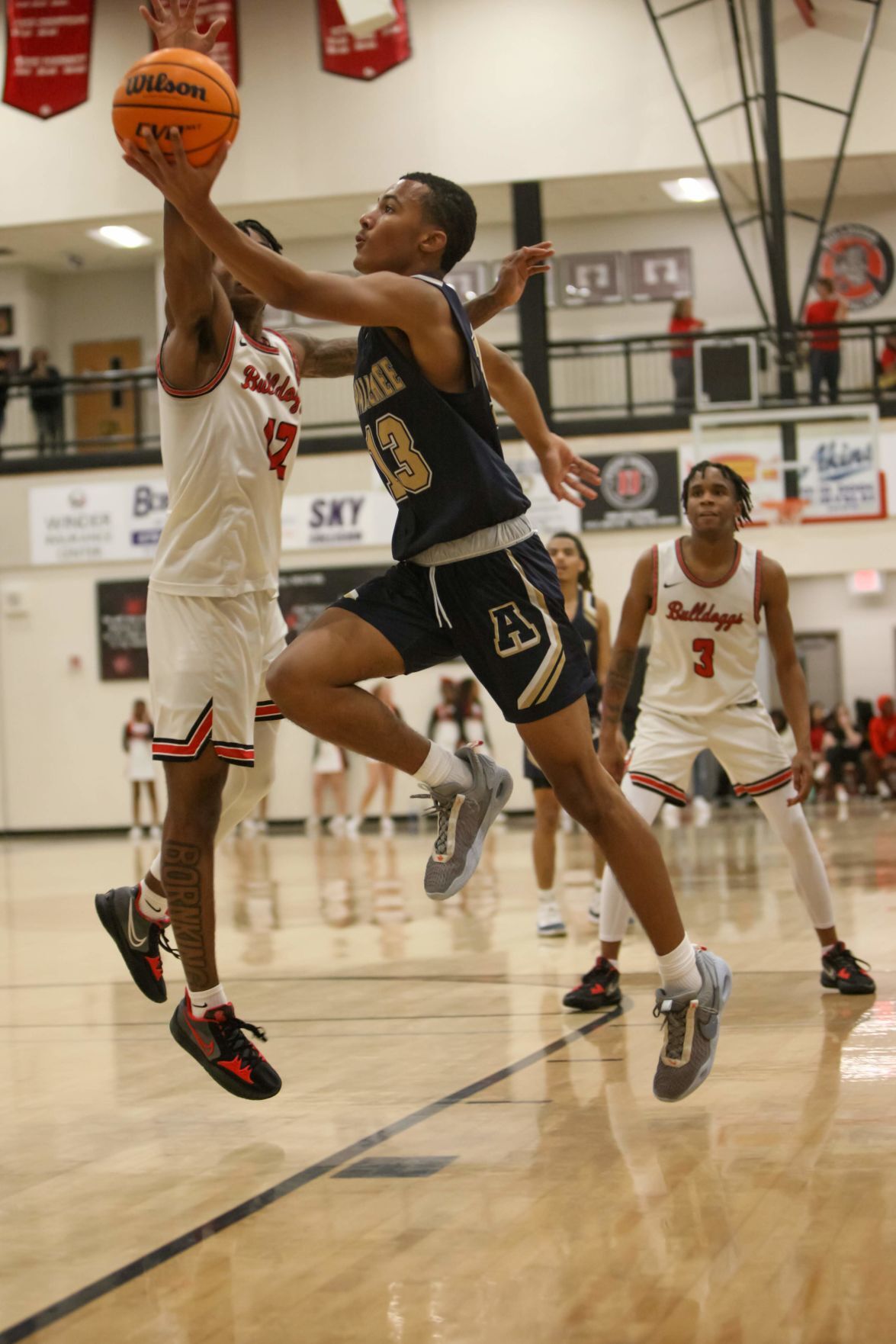 Brian Arnold soars for a layup Saturday (Dec. 18) against Apalachee.

WINDER – Winder-Barrow had a commanding lead of cross-county rival Apalachee at halftime Saturday (Dec. 18). But no lead is safe in a rivalry game.

Apalachee mounted an admirable comeback in the third quarter that saw it erase a 14-point deficit to claim a 38-37 lead late in the quarter. However, the lead wouldn’t last and Winder-Barrow held off Apalachee in the fourth quarter to win 58-53.

“One of our game goals was to start fast, get off to a great start,” said Winder-Barrow head coach Travis McDaniel. “And we did that. The intensity was good, we made some plays, made some shots early, got some stops.

“We couldn’t withstand for 32 minutes. Credit to their guys. We knew they were going to play hard no matter what the score is for 32 minutes. They’ve proven that in previous games. We’ve seen the film and they are very relentless and very much have a ‘never give up’ attitude.”

“We executed our game plan extremely well,” Rowland said. “Even [down 14 points] we felt we had the plan ready. Part of that plan was taking away their two best players. I think anybody that watches them knows that Tim and Jeremiah are clearly the best two players. They have the ball in their hands the majority of the games.

“Our goal was to take them away and make somebody else step up in a role they’re not usually in. Unfortunately, a bunch of their other players stepped up in big moments and made shots. That was the difference.”

Apalachee (4-5, 0-2 Region 8-AAAAA) didn’t do itself any favors with an unusually bad night shooting. The Wildcats drained just 3-of-27 long-range attempts, and they didn’t sink a single three-pointer in the first half. Winder-Barrow, meanwhile, was 7-of-17 from beyond the arch. Apalachee’s poor night shooting negated their success with turnovers and rebounds.

“It’s one of those games where you know it’s going to be a battle,” Rowland said. “And this one came down to who made shots and who didn’t…. I was proud of our guys, we battled to the end, we just fell short.”

Apalachee landed the first blow with an early layup, but after Smith responded with a three-pointer, Winder-Barrow (9-3, 0-1 Region 8-AAAAAA) overwhelmed the Wildcats in the first half with a series of short runs. Those were enough to take a 19-11 lead into the second quarter and a 32-18 lead into halftime.

“We changed our defensive scheme to zone in the second half,” Rowland said. “That was a big reason why we got some stops. We caused them to miss some shots in the zone and that led to us being able to play better offensively.”

Apalachee’s lead was temporary, however. Winder-Barrow scored twice before the end of the third quarter to take a 42-38 lead. A three-pointer by Jones extended the Bulldoggs lead to 47-40 early in the fourth quarter. After Apalachee cut the score to 47-42, the Bulldoggs went on an 8-0 run to further stretch their lead to 55-42.

That margin allowed Winder-Barrow to withstand one more rally by the Wildcats; an 11-1 run including a three-pointer by Tushyne Johnson and a layup by Shermarion Clark. Both led the Wildcats in scoring, Clark had 22 points and Johnson added 12 points.

Their shots at the end of the run cut Winder’s lead to 56-53. That’s as close as Apalachee would come to a victory in the fourth quarter. The Bulldogs drained a pair of free throws in the closing moments to bring their lead to 58-53. That was ultimately the final score of the game.

“When they took the lead, I called a timeout and challenged the guys,” McDaniel said. “I said ‘look, we have to play harder. They’re playing harder than us right now.’ I thought we did that for a good four-to-five minute spurt which allowed us to get it up to 55-42 going into the last three or four minutes when they made that last rally.

“Any time you play a rivalry game, it doesn’t matter our record is, what their record is, you can always expect it to be close,” he said. “Credit to them, they played really hard, they’re extremely well-coached. It’s better to win ugly than lose pretty.”

Winder-Barrow travels to Clarke Central on Tuesday (Dec. 21) before Christmas break. Its first game after the break is next Thursday (Dec. 30) at Discovery.

Apalachee’s last game before the break is Tuesday (Dec. 21) at East Hall. The Wildcats’ break ends on Jan. 7 at home against region rival Greenbrier.