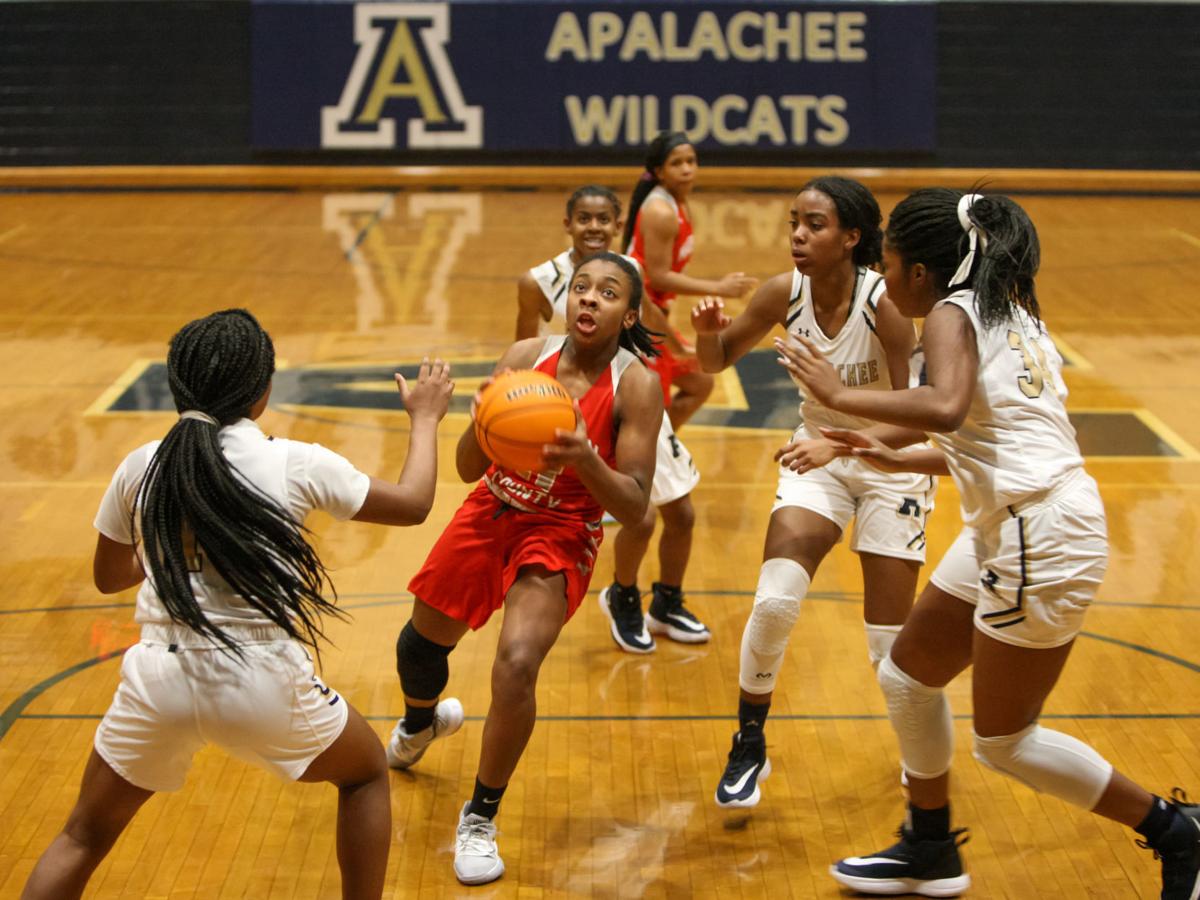 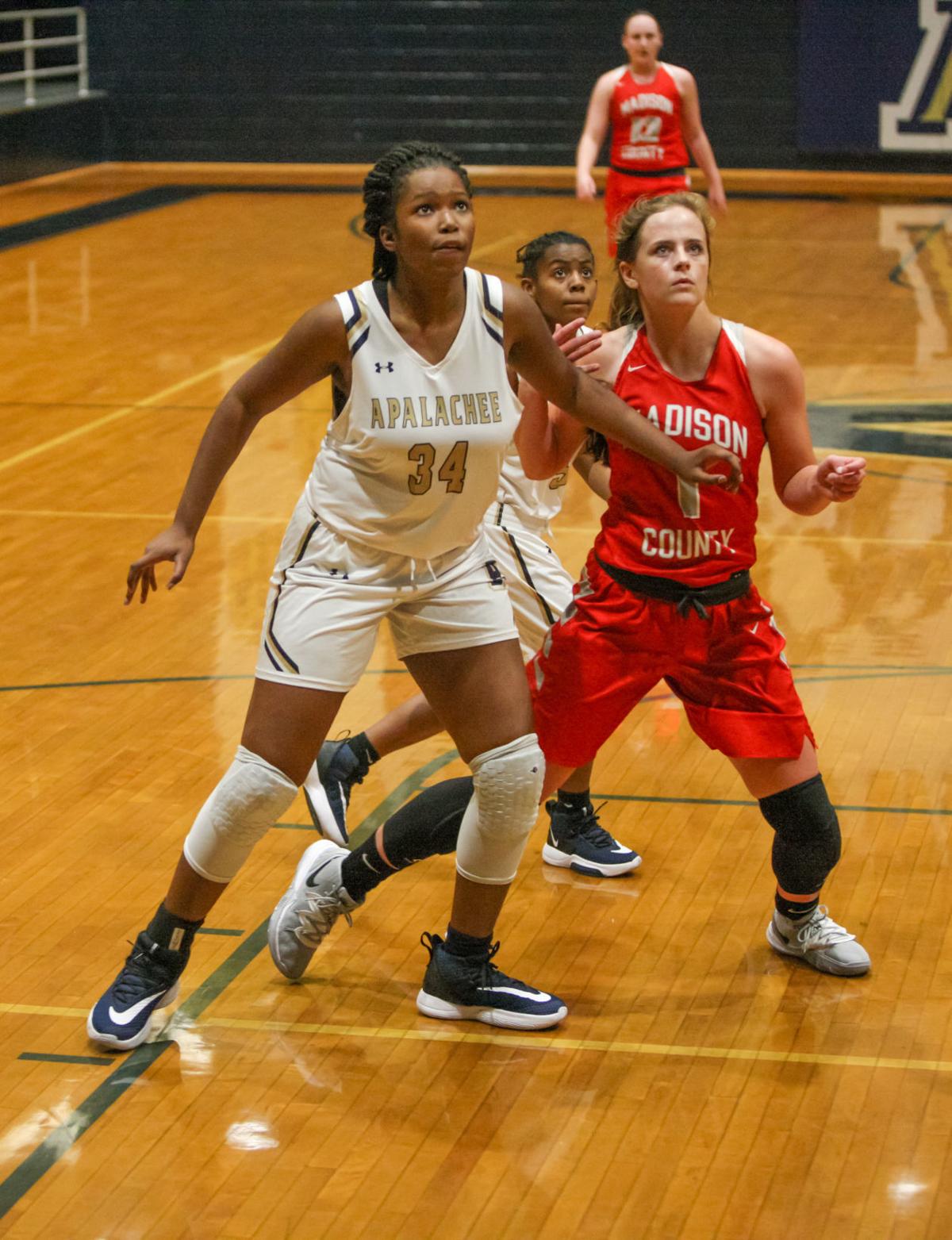 Janessa Ducelus attempts to box out opposing players for a rebound Tuesday night against Madison County. 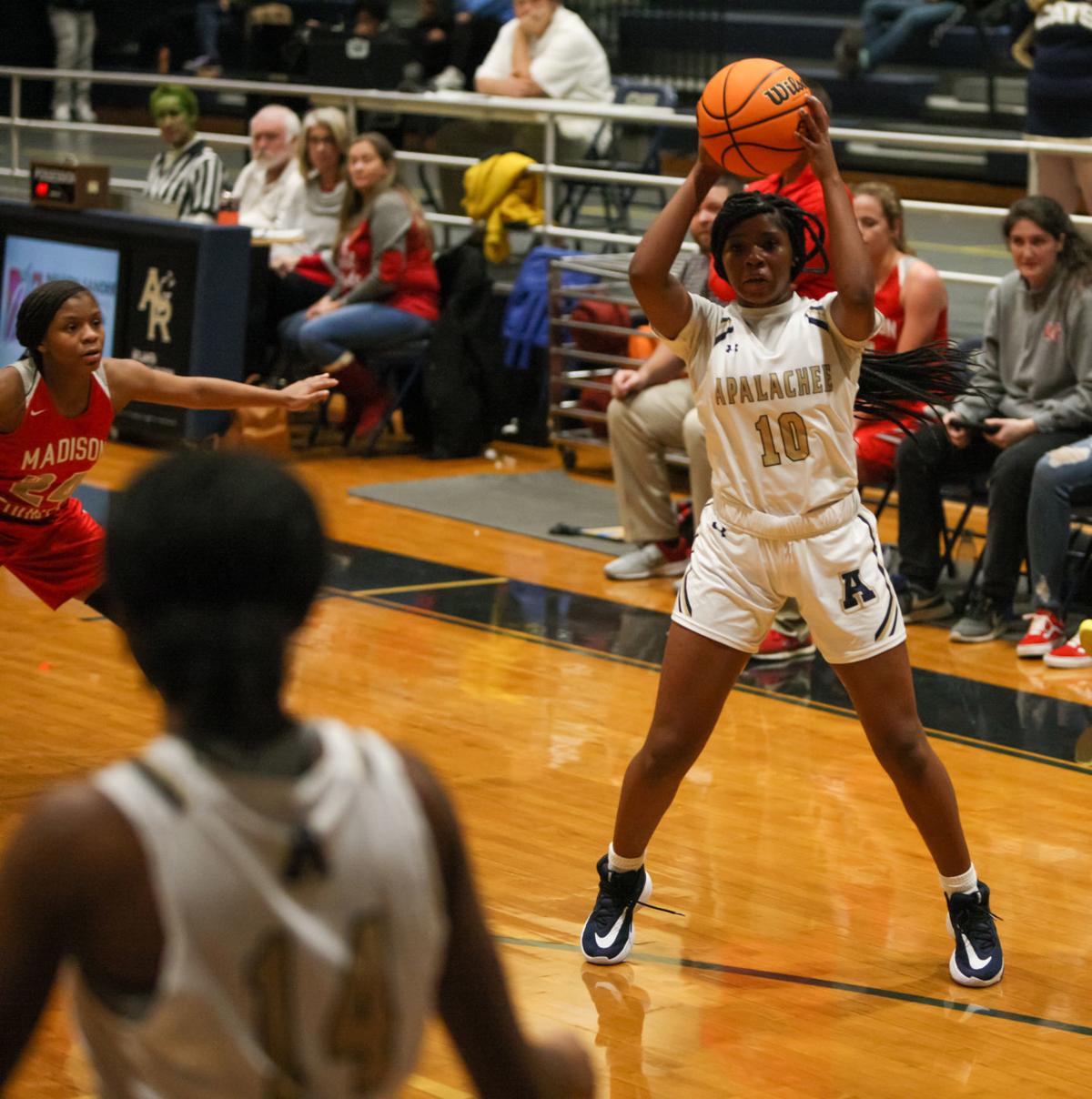 Kelsey Knox passes the ball back to a teammate while Apalachee tried to beat Madison County's press.

Janessa Ducelus attempts to box out opposing players for a rebound Tuesday night against Madison County.

Kelsey Knox passes the ball back to a teammate while Apalachee tried to beat Madison County's press.

Madison County did its best to keep Apalachee in the game Tuesday night, Dec. 10, but a near quadruple-double by Kayla McPherson prevented the Red Raiders from succumbing to their mistakes.

McPherson scored 29 points and added 11 assists to secure a double-double. She also grabbed eight rebounds and made seven steals to lead the Red Raiders to a 66-58 victory over the Lady Wildcats.

“McPherson was a beast tonight,” said Apalachee head coach Derrick Allen. “She ran the show for them and just gave us some matchup problems in terms of when she broke down the defense. She pretty much got anything she wanted, so that was good for them and bad for us.”

Despite McPherson's effort, Madison County (4-5) still couldn’t win comfortably because of what Madison County head coach Dan Lampe believed were lazy fouls. McPherson committed three fouls in a small window of time in the third quarter, forcing her to play with four fouls through the final quarter. Ella Chancey, Tiffany Wilson and Caitlyn Arwood also missed court time because of fouls in the second half. Lampe was critical of McPherson and the rest of the team.

“Kayla decided to just start following people indiscriminately and she picked up three fouls in like 30 seconds,” Lampe said. “We told them we have to be smarter because she picked up her fourth foul and Tiffany fouled throughout the game. We had to play that slow down style and we don’t get aggressive in it.

“We’re got to be a smarter team. We were running them up and down and they were right there to be knocked over and we let them right back in. We can’t get out of our own way sometimes. We get up by 20 points and do every single, possible thing we can to let them back in the game.”

Apalachee (2-8) capitalized on the fouls with stellar free throw shooting. Before having to bench most of its lineup because of foul trouble, Madison County built a 53-34 lead in the third quarter, outscoring the Wildcats 12-0 since halftime. Apalachee ended the quarter on a 7-2 run, with all seven points coming from the foul line.

The Wildcats further capitalized by outscoring the Red Raiders 17-11 in the fourth quarter. Karrah Haller started the quarter with a 3-pointer in front of her bench and Joanna Gross followed with a short-range jumper. Haller sunk another three moments later to cut the score to 57-49.

Wilson helped keep Madison County afloat late in the game. At one point, she scored eight straight points and had extended the lead to 63-49. Shots by Kesley Knox and Gross cut the lead back to 63-53. A shot by Chancey pushed the lead past 10 points again, but Haller responded with another three-pointer and Gross followed with a layup to bring Apalachee within seven points (65-58).

The clock became Apalachee’s biggest opponent, however. They were forced to try to foul but Madison County was elusive on offense and burnt the clock. A free throw by McPherson with 20 seconds left was the last point of the game.

“We have a lot of lulls where scoring is an issue,” Allen said. “We’re working through it, but definitely, at times, we get away from what we’re good at. We usually are a pretty good defensive team and that can usually lead to, when you get the initial rebound, getting out and running and trying to get some easy opportunities. We’re not the greatest shooting team, but tonight, we were able to make some outside shots and that definitely kept us in the game and allowed us to get into our little half-court trap.

“They were aggressive defensively. They were reaching in going for steals, they’re in the passing lanes. The rest were touch fouls which worked out in our favor to be able to stop the clock and knock down some free throws and definitely creep back into it. If we could have protected the ball a little bit … we were about three or four turnovers too much tonight. We had too many empty possessions.”

The Lady Wildcats will be back in action Tuesday, Dec. 17, when they host North Oconee at 6 p.m.