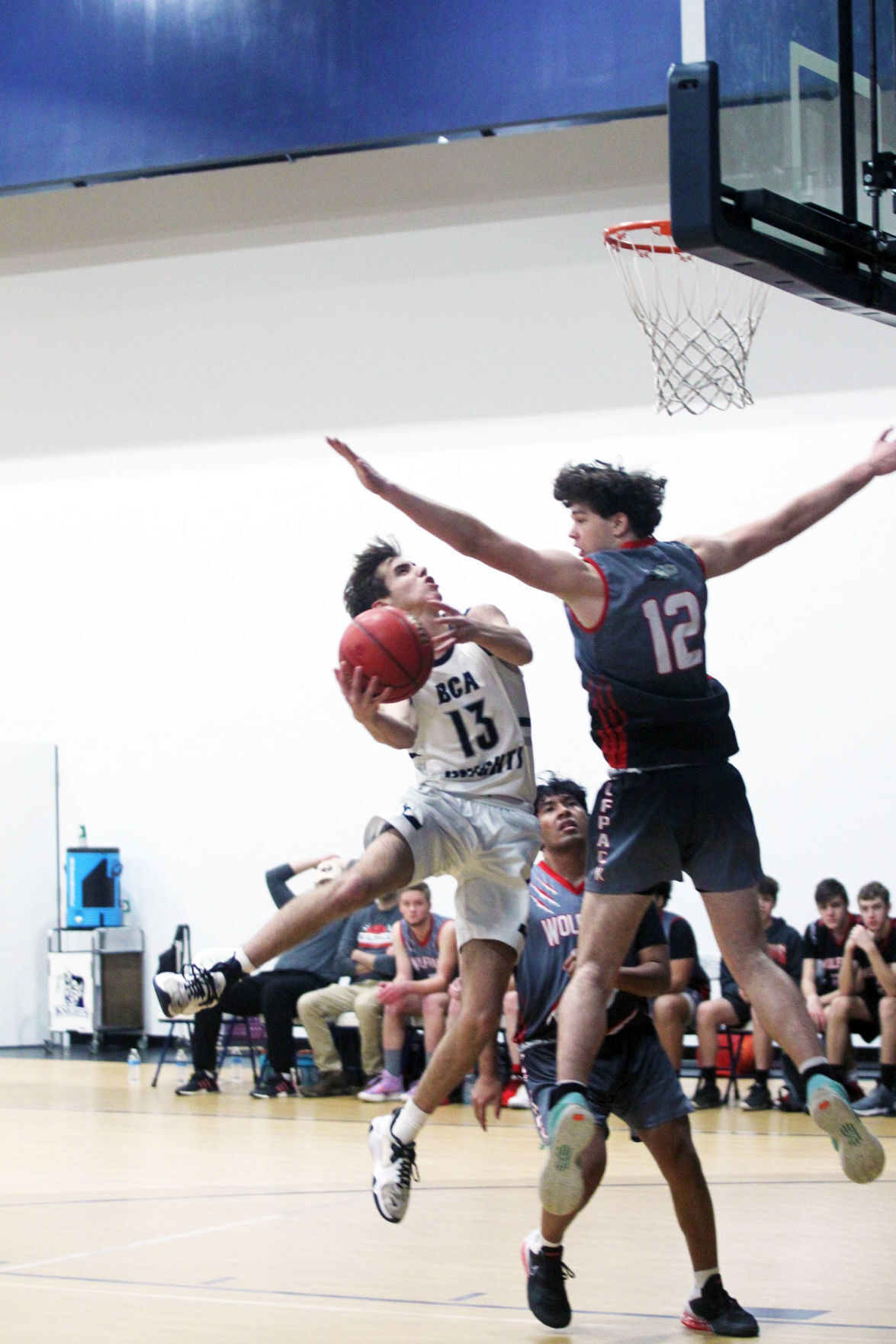 Johnny Dickinson goes up for a contested layup Tuesday (Jan. 4) against HALo. Dickinson ended the game with 26 points. 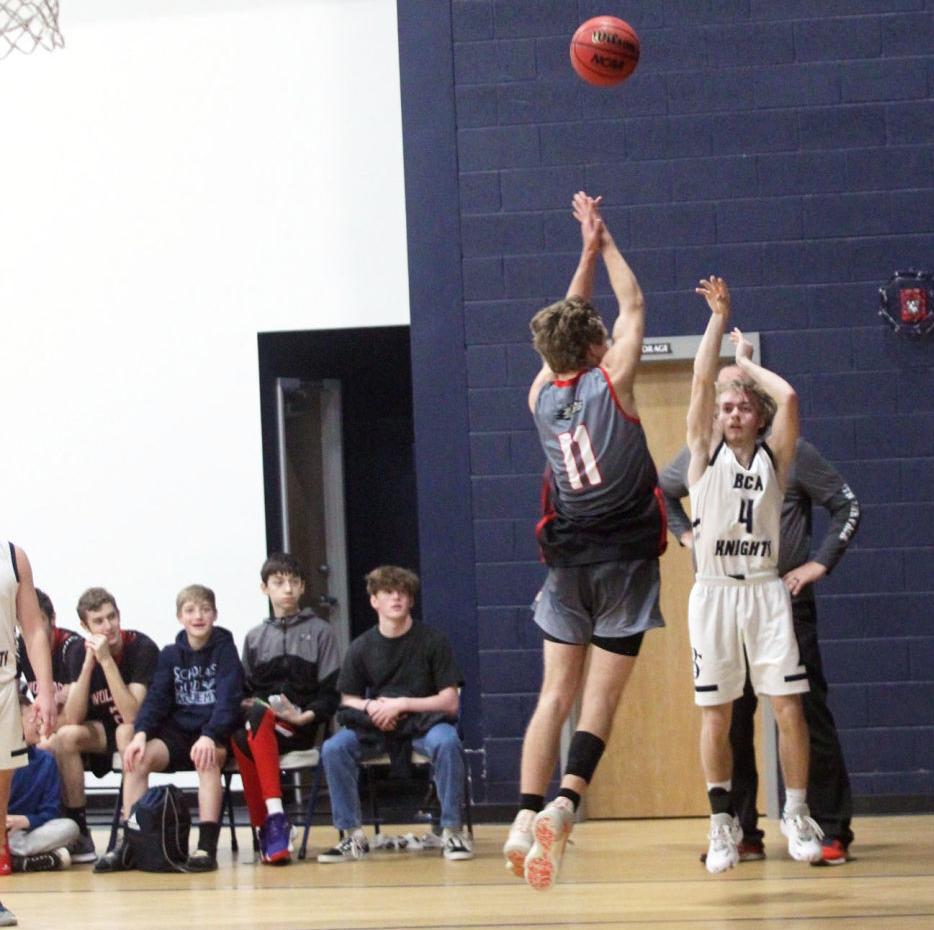 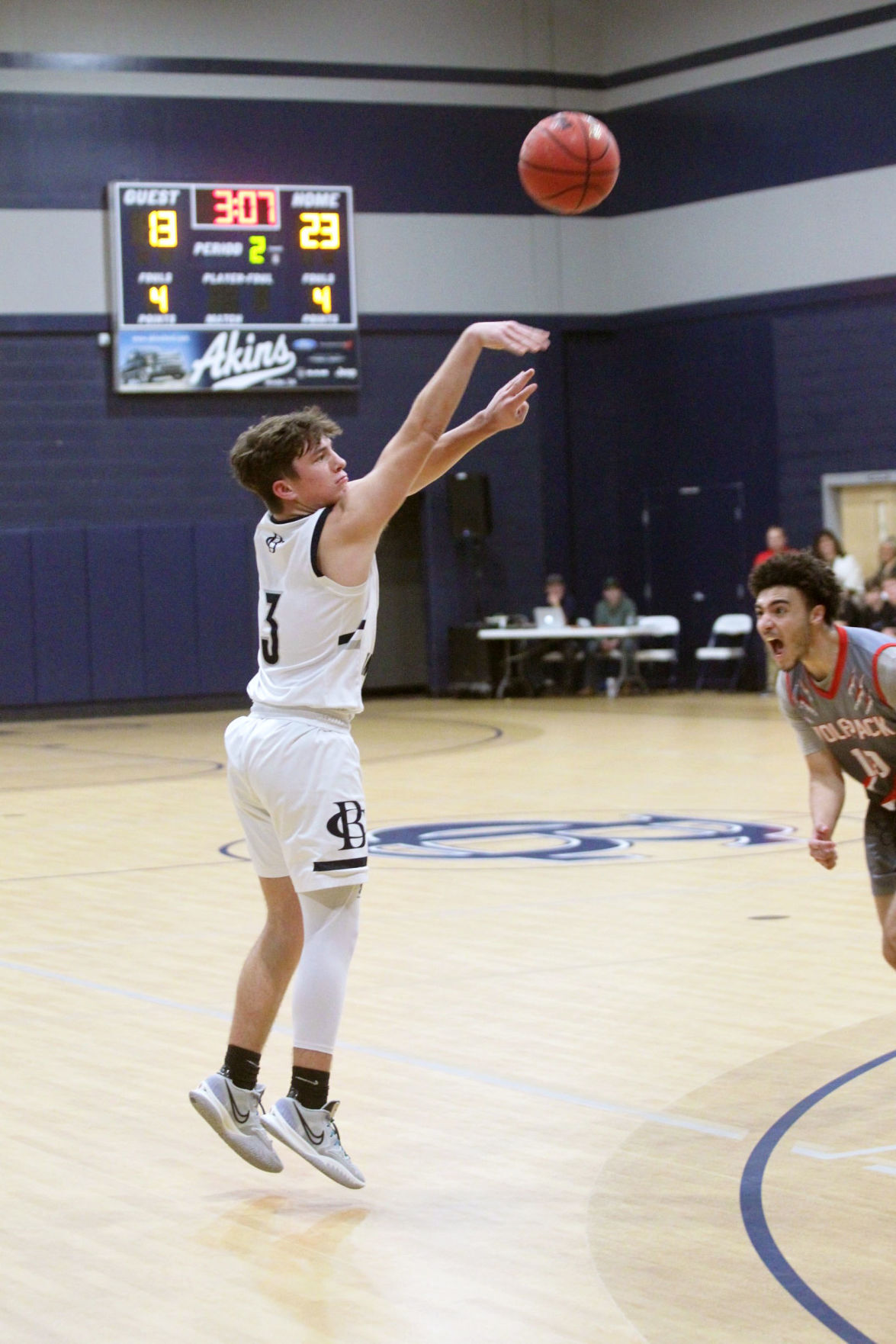 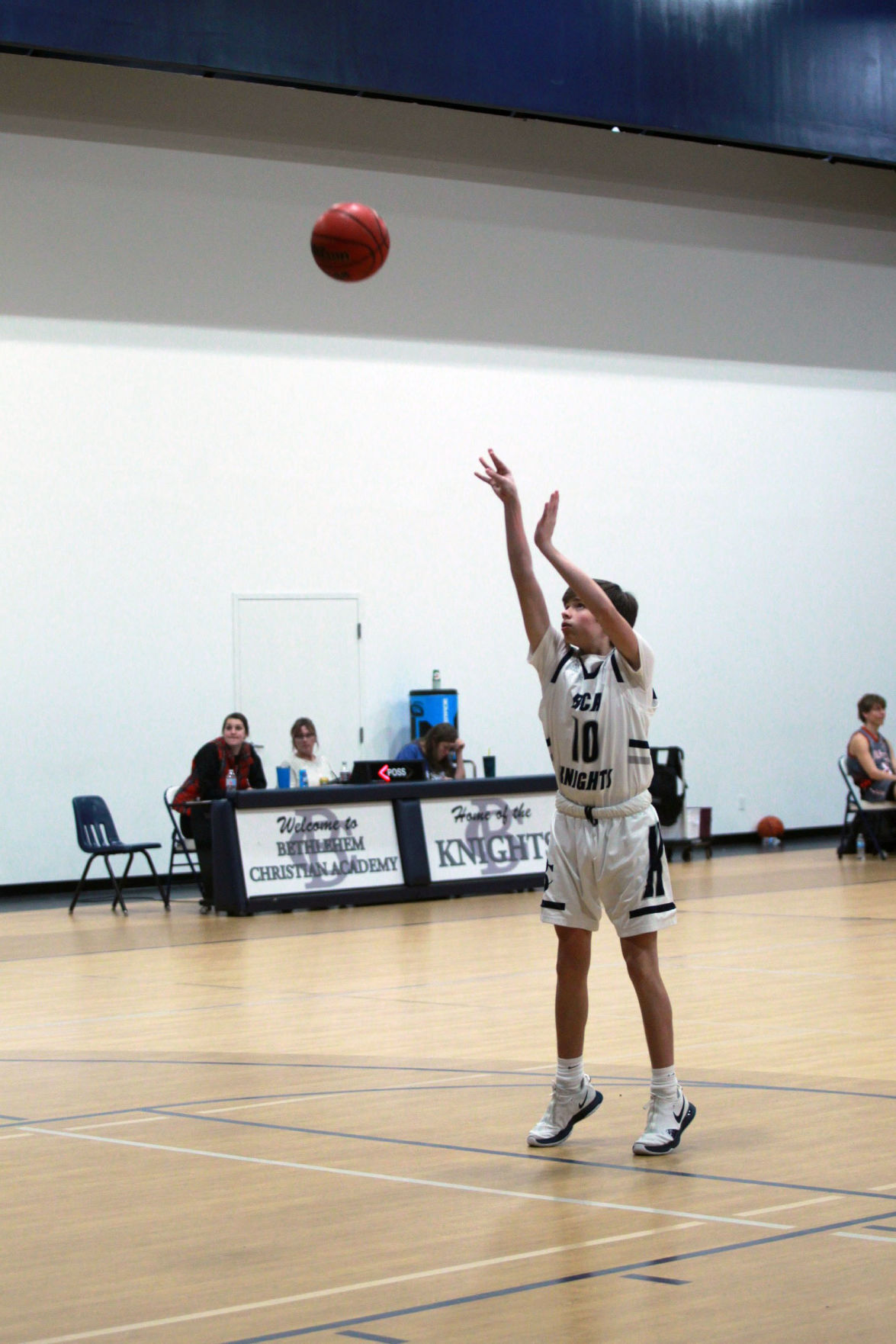 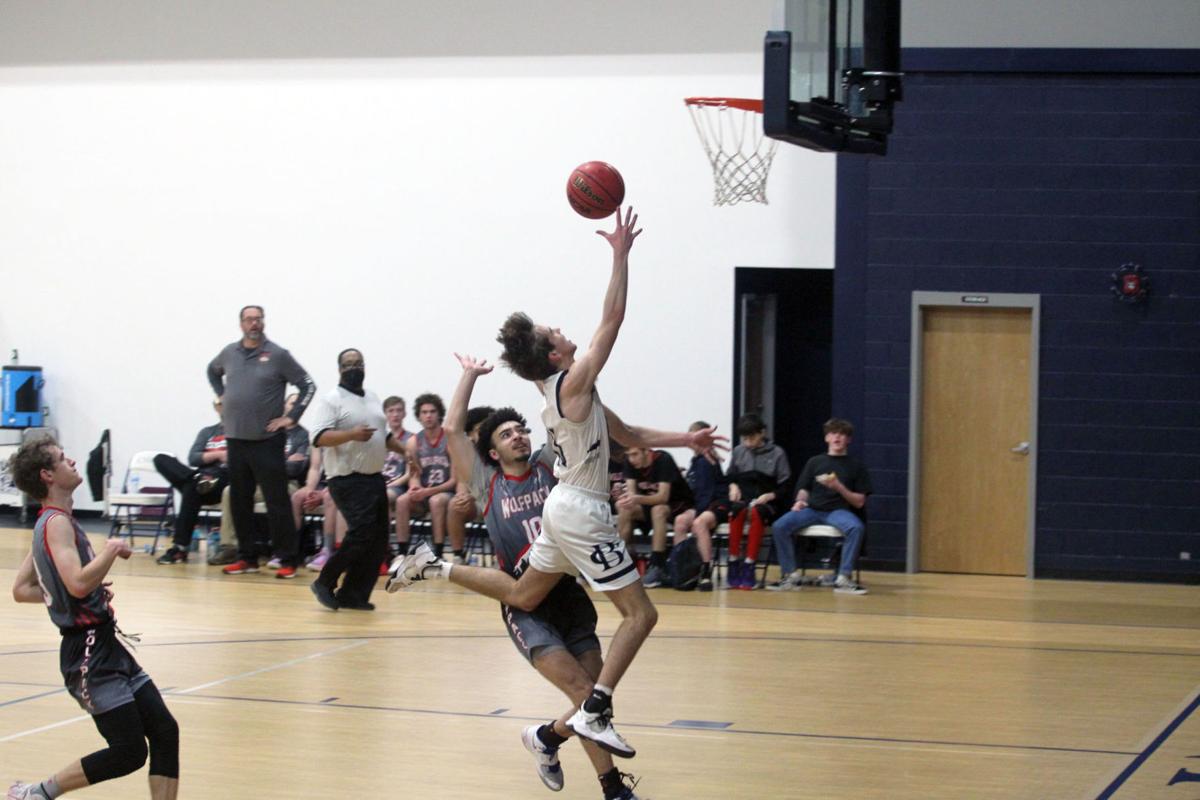 Johnny Dickinson glides past a HALO defender for a layup Tuesday (Jan. 4) in Bethlehem Christian's win over the Wolfpack. 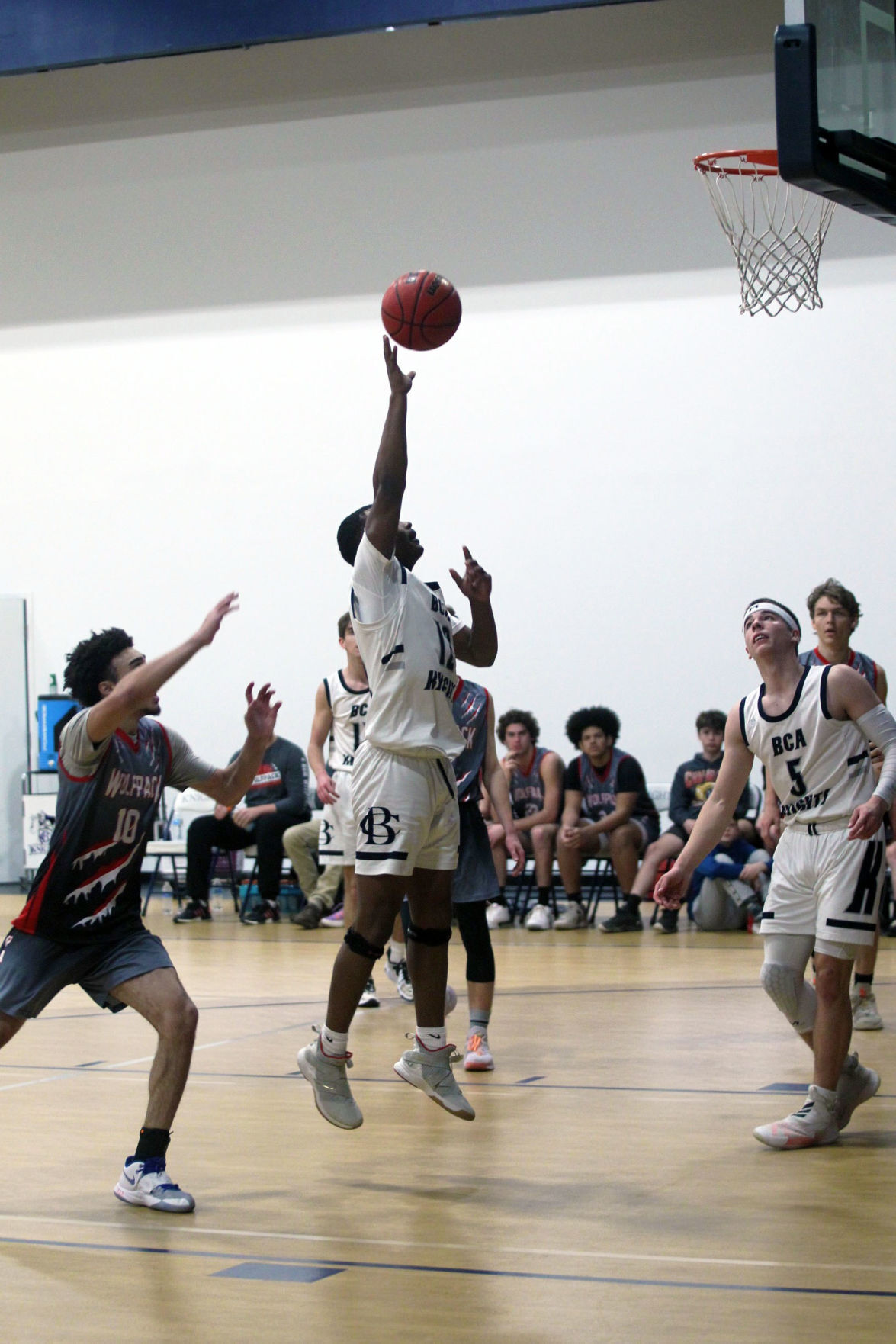 Miles Jernigan attempts a jump shot in the paint Tuesday (Jan. 4) against HALO.

Johnny Dickinson goes up for a contested layup Tuesday (Jan. 4) against HALo. Dickinson ended the game with 26 points.

Johnny Dickinson glides past a HALO defender for a layup Tuesday (Jan. 4) in Bethlehem Christian's win over the Wolfpack.

Miles Jernigan attempts a jump shot in the paint Tuesday (Jan. 4) against HALO.

The Bethlehem Christian Academy Knights dominated the HALO Wolfpack in an unusual game on Tuesday (Jan. 4).

The score was tied several times in the first quarter but it didn’t take long for the Knights to grab a lead 15-9 by the first buzzer. Coach Rusty Watson said the Knights had one big guard who was scoring too many points so they had to make some plays off of that.

In the beginning of the third quarter it looked like the Wolfpack was going to make a comeback down 25-37, but they quickly got shut down. At the end of the third quarter the Knights were ahead 47-37 until Presley Wade's three-pointer before the buzzer extended the lead to 50-37.

“Percentage wise, we made a lot of three and two point shots. That helped us a lot," Watson said.

The fourth quarter of the game took an interesting turn after Doolittle was taken out by a member of the Wolfpack during a layup. Doolittle was down for a moment, but he finally returned to his feet and assured the crowd.

Doolittle says he’s still feeling out his roll on the team.

“I’m here to get assists, spread out the offense- set it up, lock someone down on defense, doing whatever coach asks me.”

That wasn't the last physical incident Doolittle would be a part of.

Later in the game, during a scuffle for a loose ball, two HALO players lifted Doolittle in the air. The incident animated the BCA crowd but referees didn't call a foul.

“I’ve never seen that before in my life," Watson said. “They just picked him up off the ground. I guess we’re allowed to do that now.”

That threw the Knights (and the crowd) into a rage, leading to a technical for the Knights.

Watson admitted, “We just gotta handle ourselves better in those situations… It is what it is.”

After both squads took technical foul shots, the Knights led 61-44 with 1:06 on the clock. The Wolfpack was able to score a couple more points before the end of the game, landing the final score at 61-46.

“Taking care of the ball and not tuning it over.” Watson said was the winning factor of this game.

Bethlehem’s Christian's next game is on Friday (Jan. 7) at John Milledge Academy.

“[John Milledge] won the state championship last year but I want our guys to come out and compete," he said. "We’re looking forward to the privilege playing a good basketball team."

Bethlehem Christian Academy Knights had a close game on Wednesday (Dec. 29) but fell short of the tournament championship against Quitman County’s Hornets 57-51.

“It was the most physical game I’ve ever coached.” said Rusty Watson. “They were a very tall, very athletic basketball team.”

The Knights fought, but trailed the Hornets 33-17 at halftime. The second half was a completely different ball game. Bethlehem Christian kept Quitman County from puuling away in the third quarter and entered the fourth quarter trailing 45-29.

“I told our guys it was going to be a battle. We were going to have to fight back in the second half.” Watson said.

In the fourth quarter, the Knights closed the lead to four points with three minutes left. However, Bethlehem Christian had two starters foul out late in the game and it had to play down a man. Quitman County held on to win 57-51.

“To lose by six to that team, as a public school that had guys 6’3”, 6’4”, 6’6”, we were outmatched in every category," he said. "But for us to go and compete against them and end the game down by six, I was so proud of the way they fought. How they battled.

“Obviously we were upset we didn’t win, but I told our guys we didn’t loose that game, we just ran out of time.