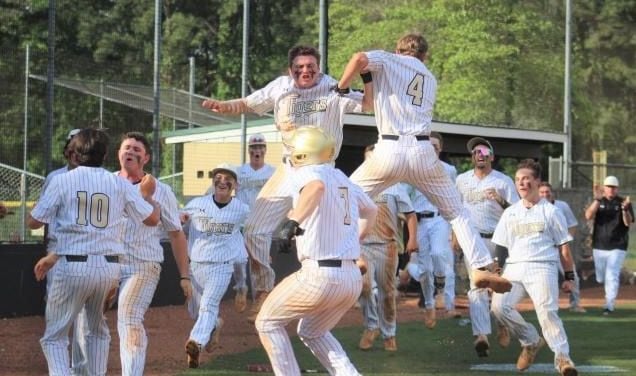 The Commerce baseball team enjoys a celebration at home plate during its doubleheader sweep of Bowdon Wednesday (May 5) in the Sweet 16. 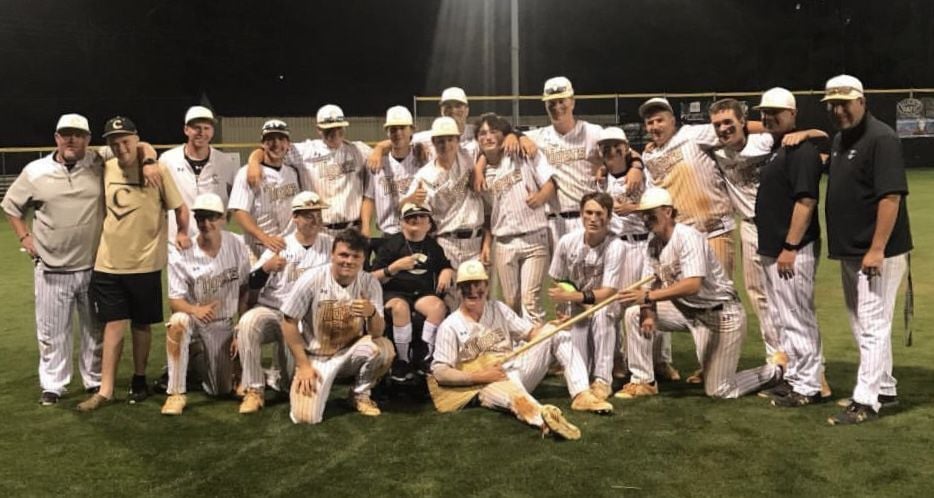 The Commerce baseball team poses for a photo after having earned a spot in the Elite Eight for the second-straight year.

The Commerce baseball team enjoys a celebration at home plate during its doubleheader sweep of Bowdon Wednesday (May 5) in the Sweet 16.

The Commerce baseball team poses for a photo after having earned a spot in the Elite Eight for the second-straight year.

The Commerce baseball team enjoyed a stellar regular season with its first region title in 25 years. Now, it’s fast at work on a memorable postseason.

The Tigers beat Bowdon twice Wednesday (May 5) at home in a back-and-forth set of games to secure a second-straight appearance in the Class A-Public Elite Eight. The team has swept both the first two rounds of the playoffs.

"One thing that we've been talking about is that the region championship was awesome, but that season is gone," said Commerce coach Steve Cotrell, who has the Tigers in the Elite Eight for the third time in his tenure. "This is a new season. So, now every game is different."

Facing a Bowdon team it beat 6-2 during the regular season, Commerce won 8-7 in eight innings in Game 1 and then beat Red Devils in Game 2, 11-7, to earn its second appearance in the quarterfinals since 2019. No state tournament was played in 2020 due to COVID.

The Tigers (24-10) will now host a Monday (time TBD) doubleheader with No. 4-ranked Charlton County (28-6). A third game, if needed, is slated for Tuesday (time TBD). The winner will face either Metter or Schley County May 15 and 17 in the semifinals. If Commerce advances, it will host.

Colin Welch went a combined 3-for-5 in Wednesday’s victories, belting two home runs for the Tigers, who have won five of their last six games.

Commerce won Game 1 Wednesday when Will Slater scored from third base on an error in the bottom of the eighth to break a 7-7 tie.

The Tigers held a 7-3 lead entering the seventh inning, but Bowdon (14-16) put up a four-run rally in the top half of the inning to force extras.

Commerce had led 5-0 after two innings and held a 7-2 edge after five frames.

"Don't get me wrong, (coach Brian) Vance does a great job with Bowdon — Bowdon was very, very good," Cotrell said. "They were tough kids. They competed, and they weren't going to go away. They made that obvious in the first game. I felt like in Game 1 we had a chance to kind of put them away, and we didn't."

Welch went 2-for-3 with an RBI in Game 1, homering in the bottom of the fifth inning. Hampton Hutto was 1-for-3 with two RBIs.

In Game 2, the teams swapped leads three times with Commerce (playing as the visiting team) taking over for good with three runs in the top of the fifth to push ahead 7-5. The Tigers tacked on three more insurance scores in the top of the sixth, padding the lead at 10-5.

Bowdon got back two runs in the bottom of the sixth inning. Commerce scored its final run in the top of the seventh inning as an error allowed Gray Holbrook to score from third.

The Tigers began the game facing a 1-0 deficit after an inning before getting on the board in the third inning.

Cayden Lord drilled a two-run home run during the third, and Welch (1-for-2) followed with his second home run of the twin bill — a two run shot — later in the inning. His blast gave the Tigers a 4-1 lead, but Bowdon rallied for four runs over the course of the third and fourth innings to take a 5-4 lead.

Hutto, who went 2-for-4, drove in the go-ahead run in the top of the fifth inning, giving the Tigers a 6-5 lead. Sully Burke had tied the game 5-5 two batters earlier with a sac fly RBI.

Tyler Herring and Gray Holbrook both went 2-for-4 in the nightcap.

Cotrell said his team continues to improve upon its approaches at the plate.

"When we saw the pitcher the second time around, they listened and they kind of picked up on some things and made adjustments," he said, noting that the two two-run home runs in Game 2 were hit during the second time through the lineup.

As Commerce now moves on in the playoffs, it continues to dedicate its season to the memory of Evan Davis, a Tiger baseball standout who passed away in July.

"The comment was made (Wednesday) when it got a little emotional in Game 1, 'What would Evan do? How would Evan handle this?'" Cotrell said. "To me, that's a group that's matured, and it's definitely been a special season. There's not any words to say how proud I am of these guys of what they've done."

Commerce now has a chance to advance to the Final Four for the first time since 1996 when it hosts Charlton County. The Indians beat Johnson County 10-4 and 4-3 in the second round. Charlton County, which has won 12 straight games, is the No. 1 seed out of Region 2-A Public.

"It's a great opportunity for our kids," Cotrell said. "It's going to be a great challenge ... This is playoff baseball. It's going to be intense. How you handle adversity and emotions is how things will play out. You can only control what you can control."

Cotrell said Charlton County, which won back-to-back state titles in the last decade, is going to have "a little swagger about them and confidence."

"We just have to have the same confidence and swagger and keep doing what we're doing," he said.

The coach said he expects Charlton County to be aggressive on the base paths, have a couple of good arms on its pitching staff and swing the bat well.

"It's not going to be something that I don't think we haven't seen, but at the same time, are we going to show up and be ready for the challenge?" Cotrell said.

Commerce, again, has the advantage of hosting this series.

"It's huge," Cotrell said. "I can't tell you how huge it is. Not only do you get to keep the kids on somewhat of a routine, just playing at your own place, the kids are comfortable. We know how the field plays, it plays into our hands a little bit with the way we swing the bat ... It's huge that we're at home."