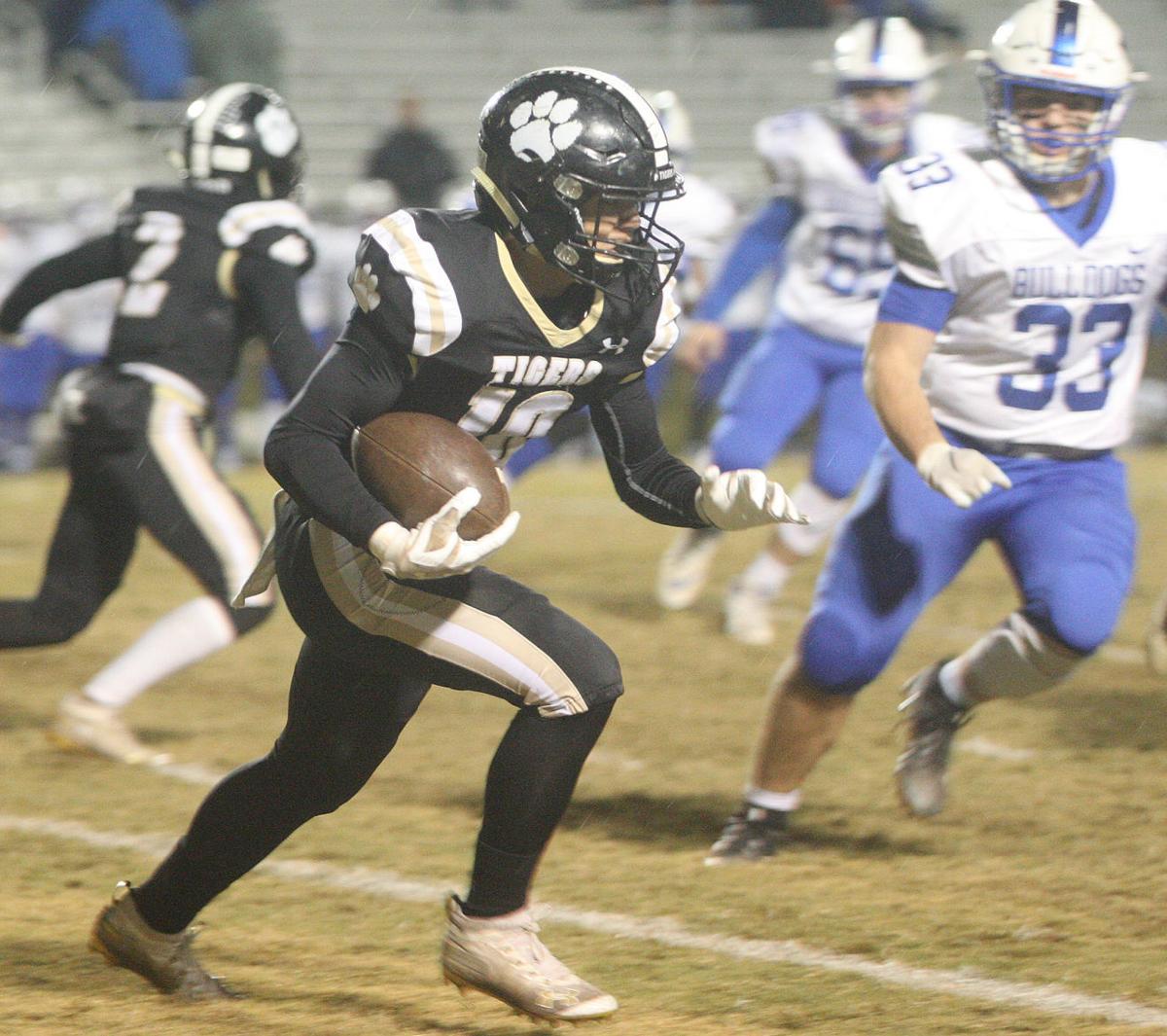 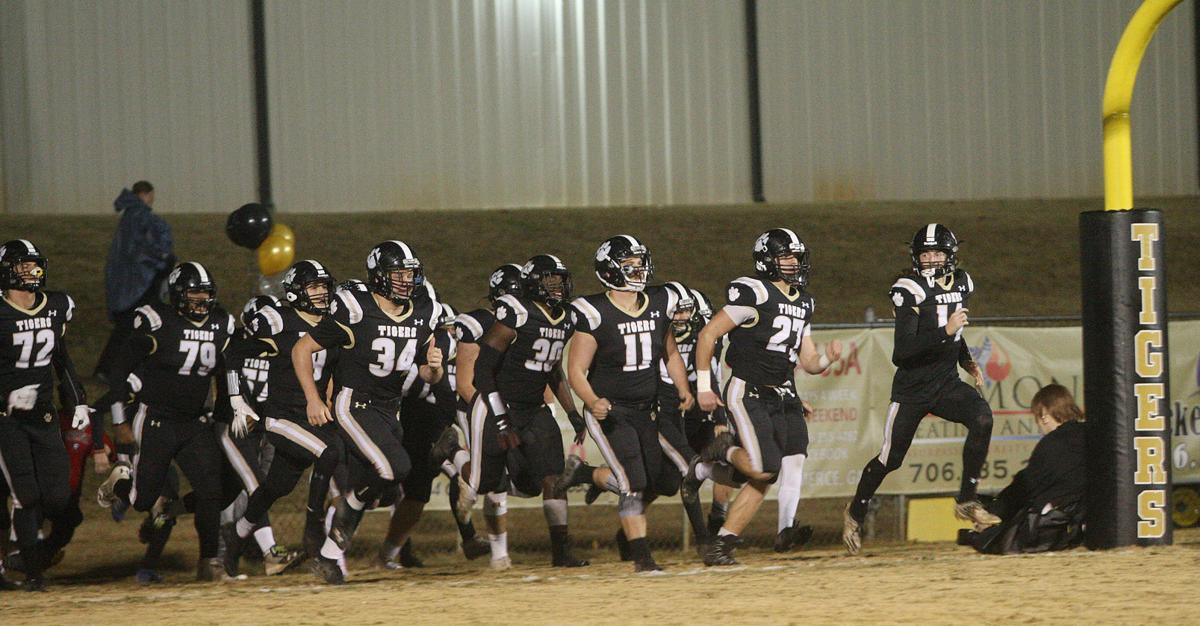 The Commerce football team takes the field Friday (Nov. 15) before its first-round playoff game with Trion. The Tigers won the game 23-6. 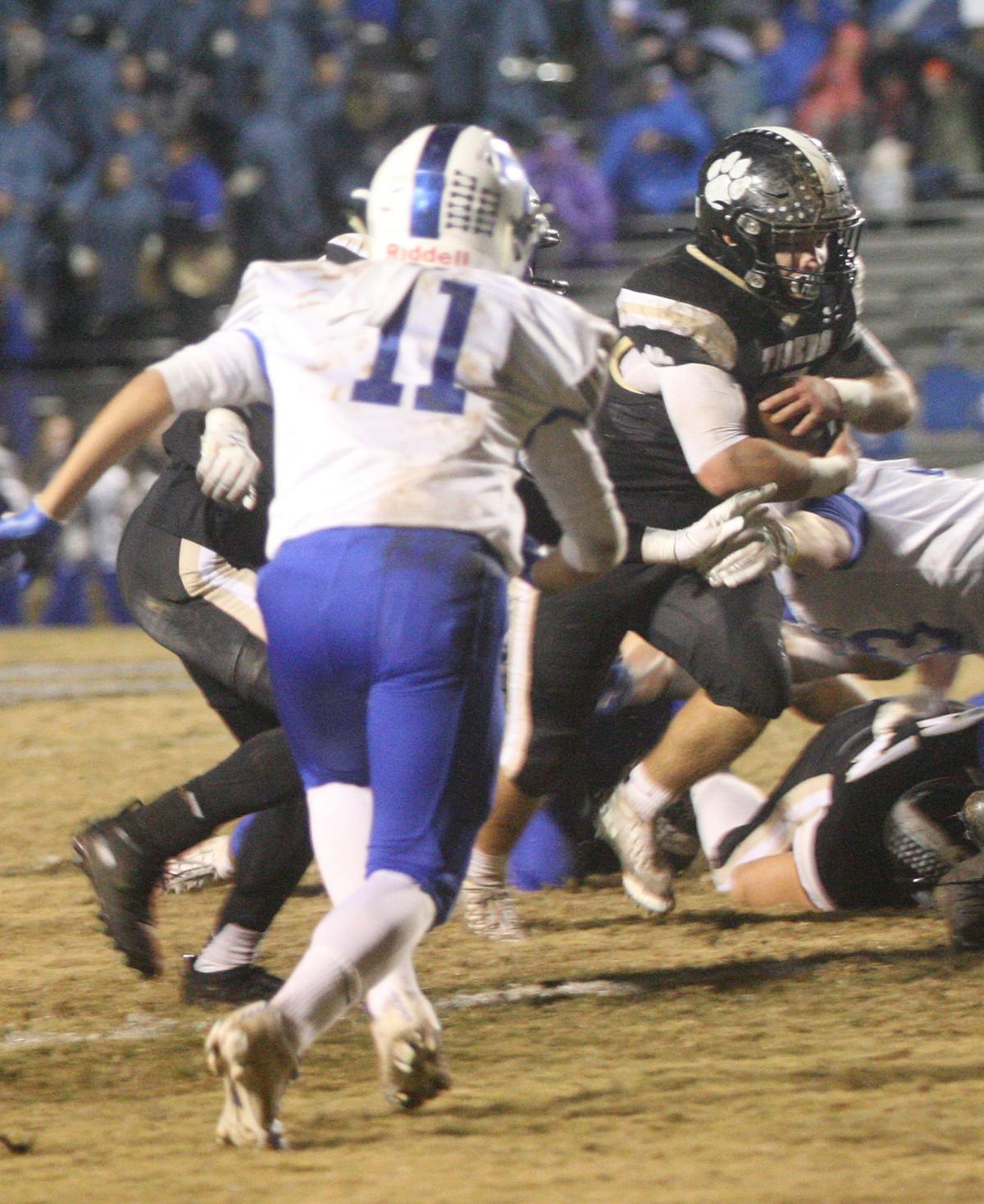 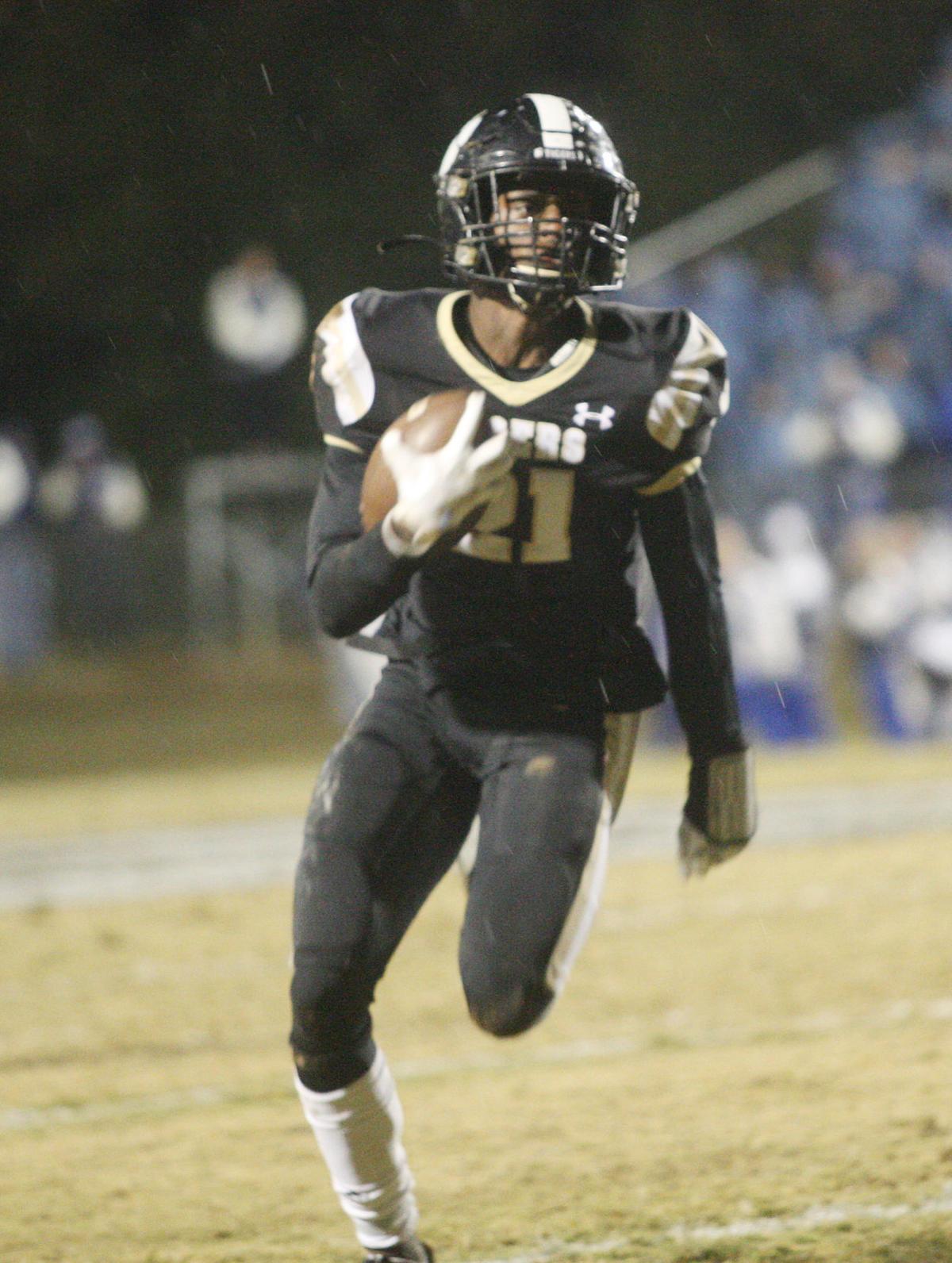 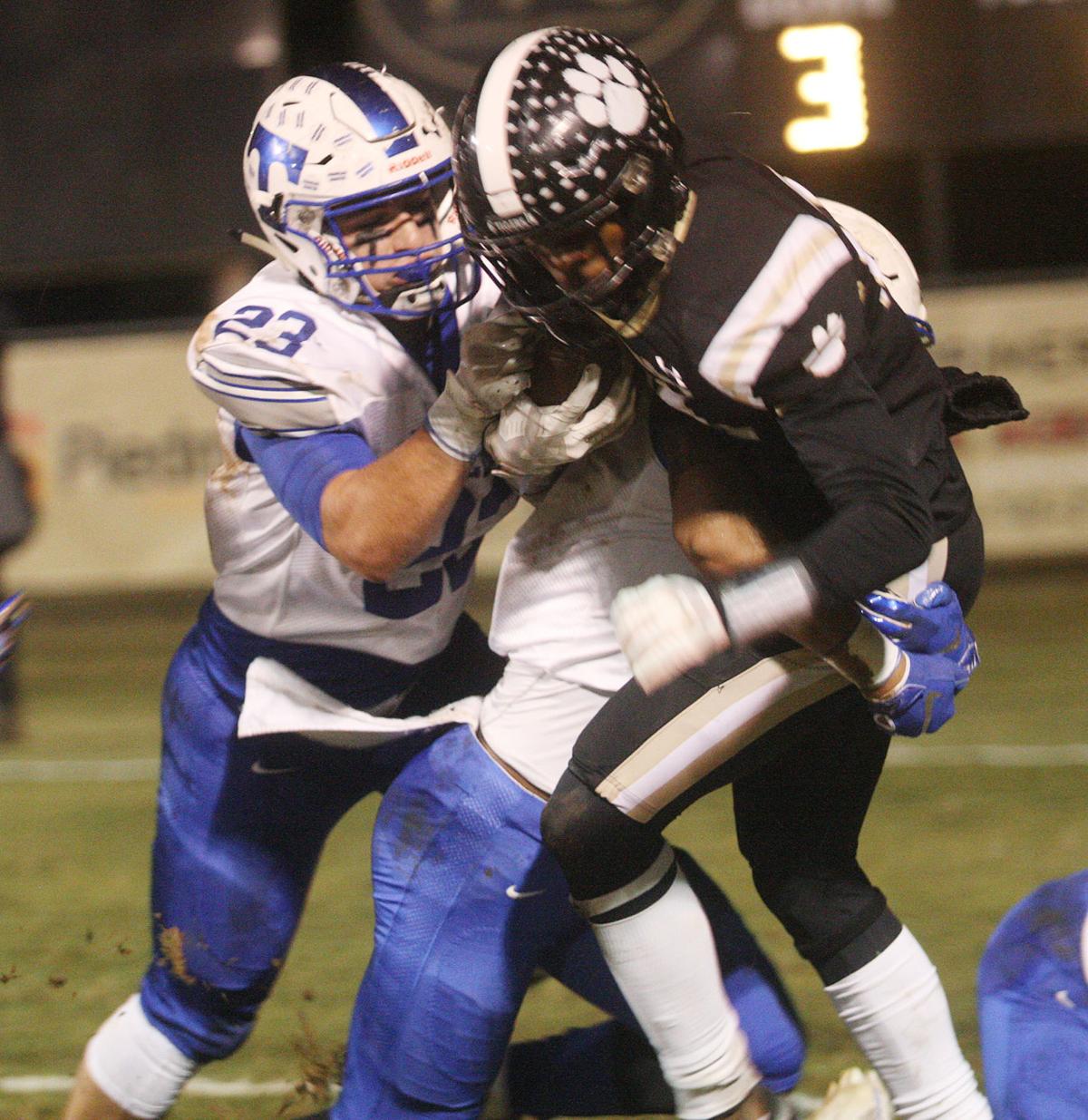 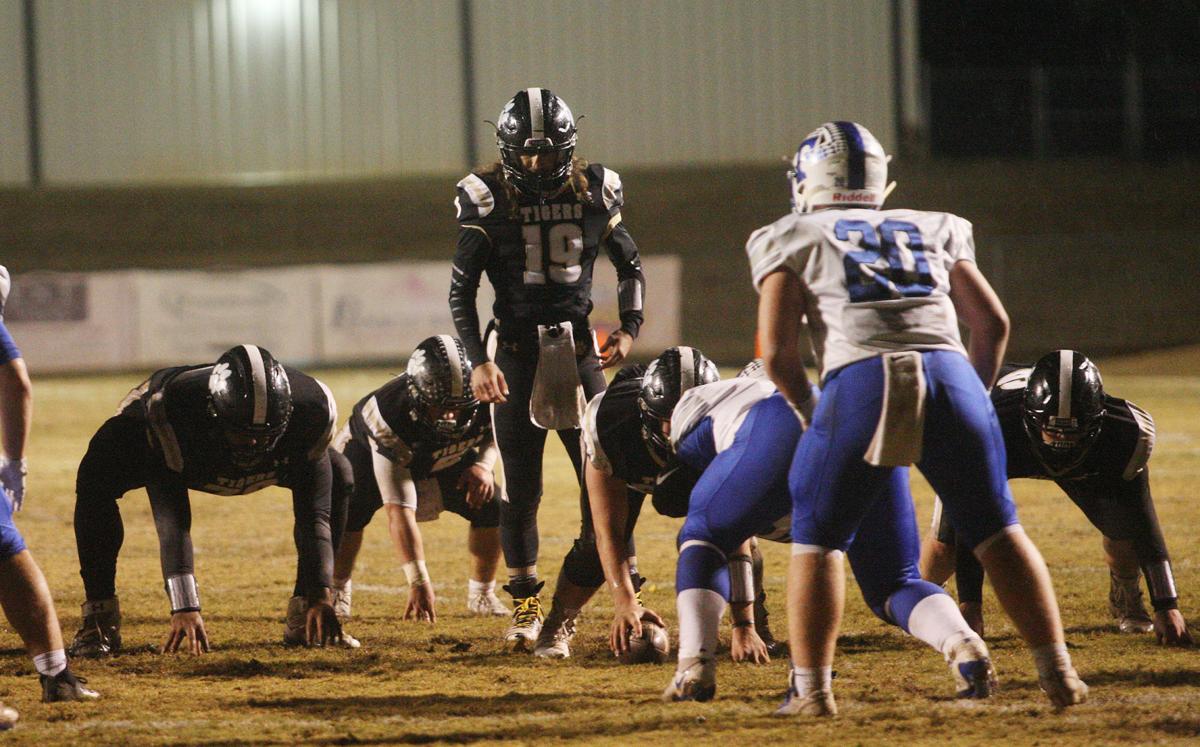 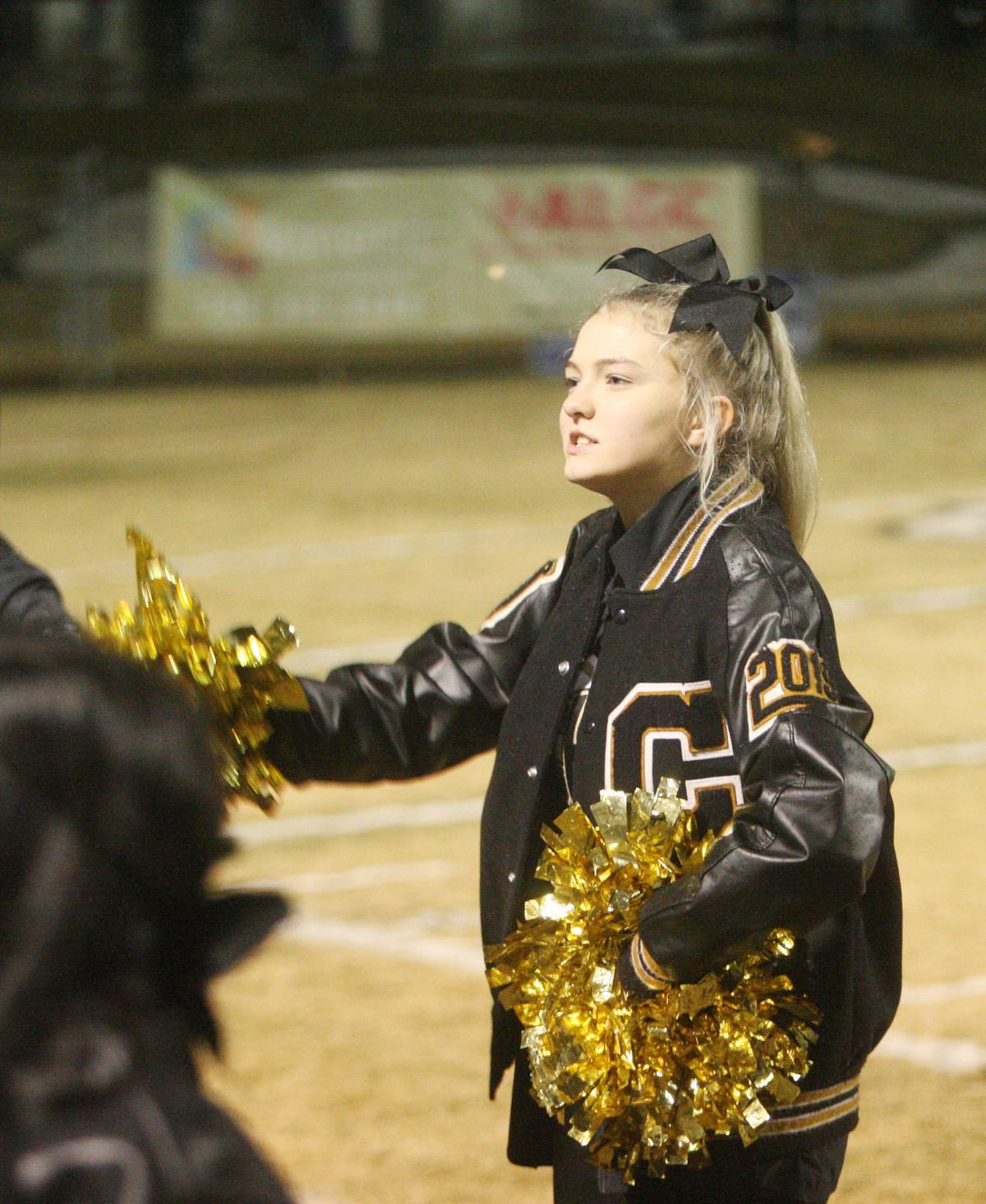 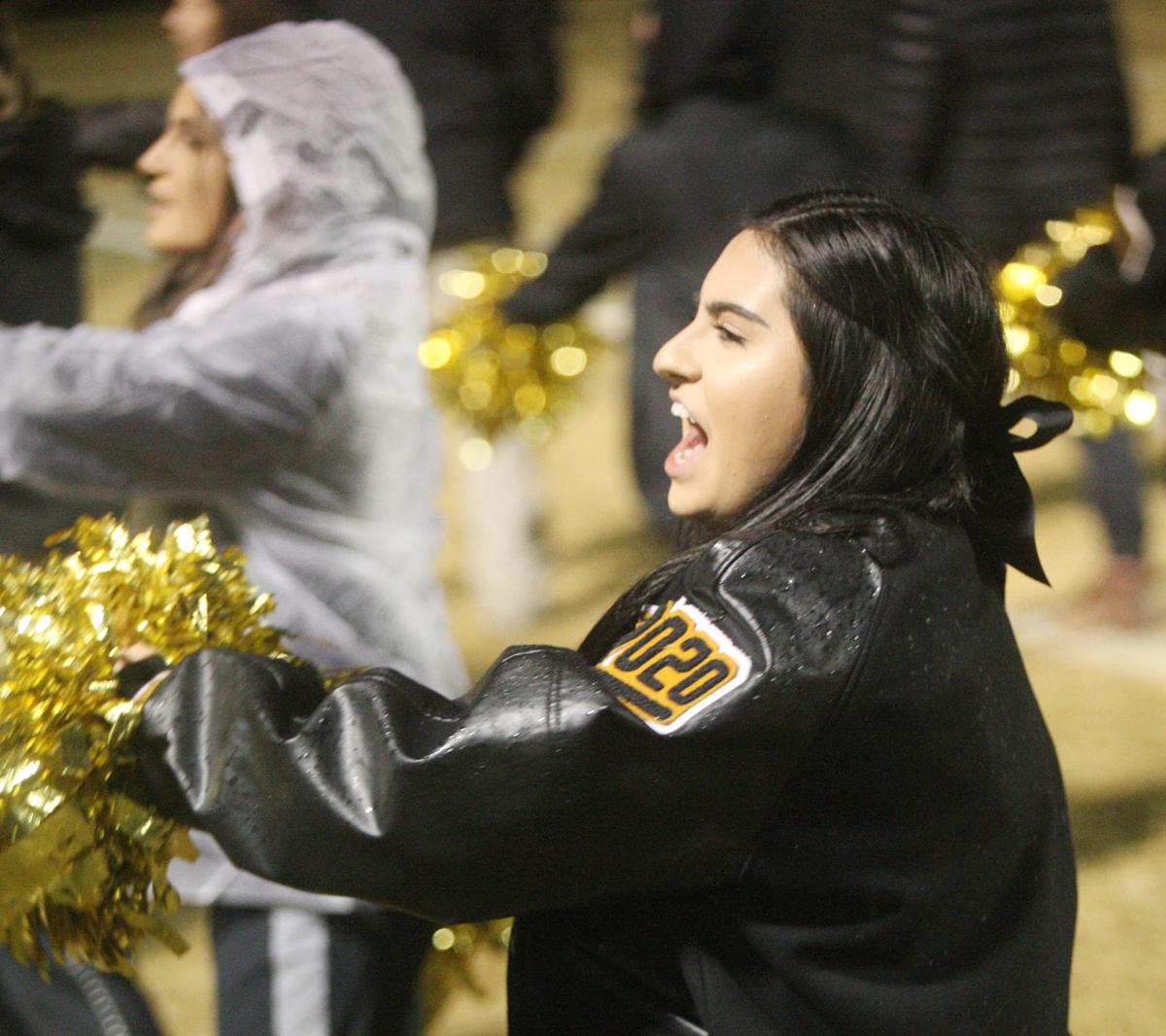 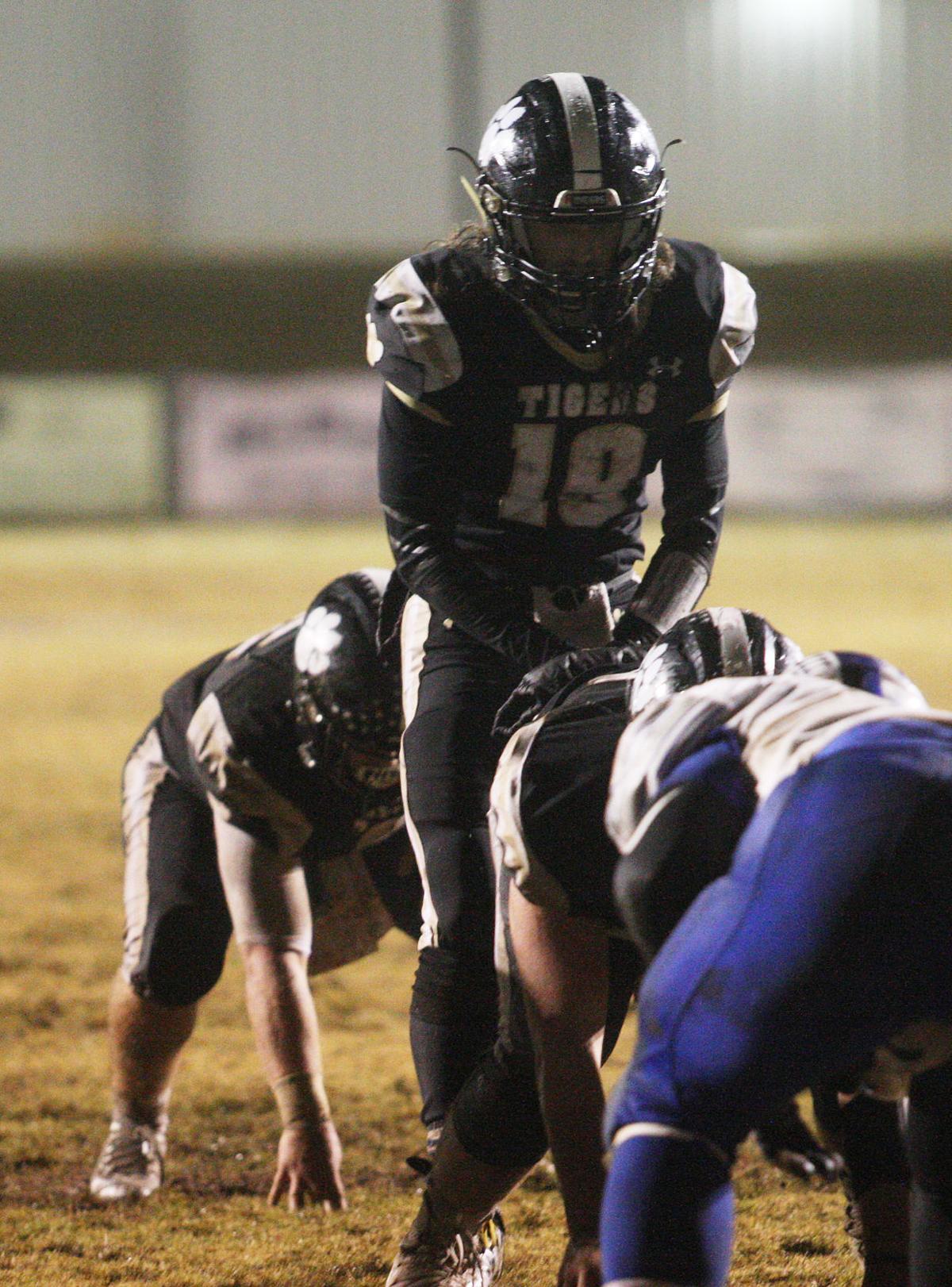 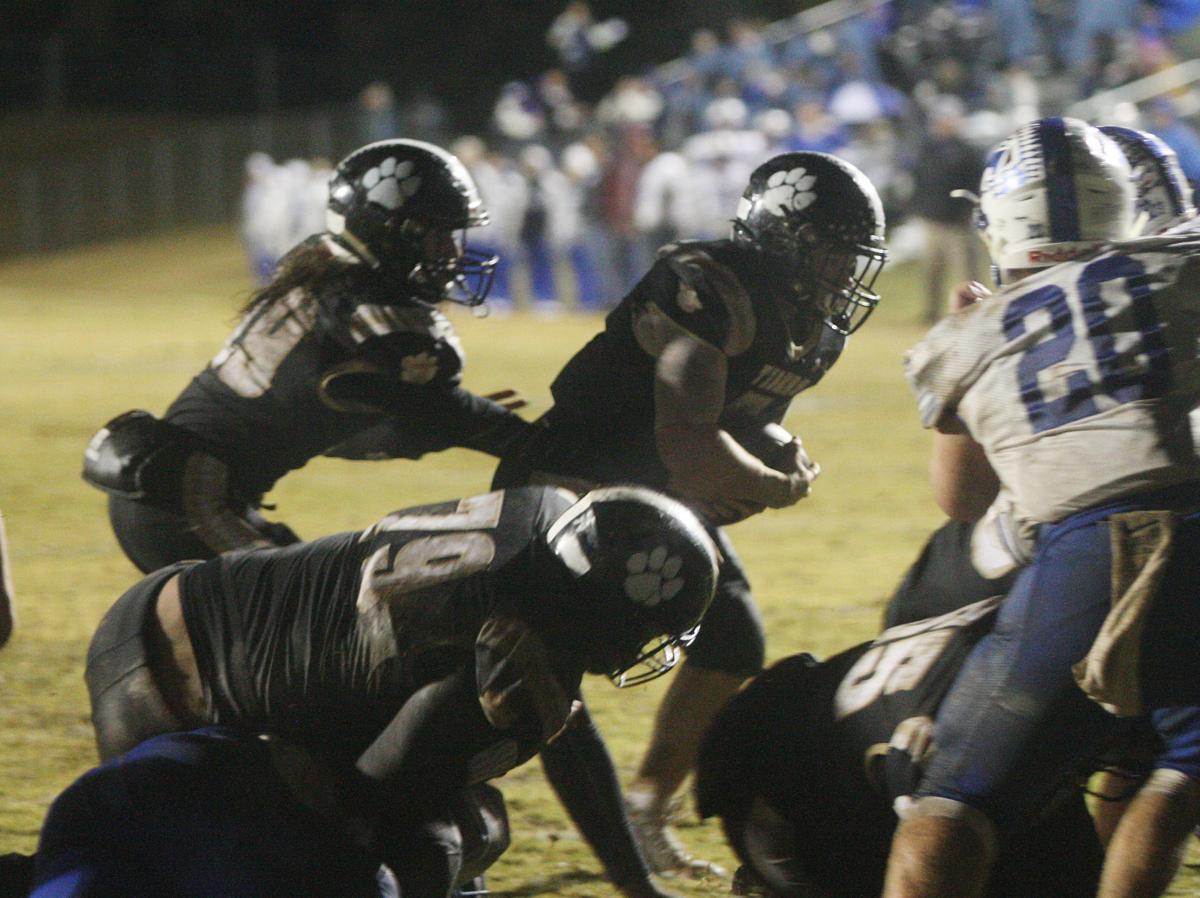 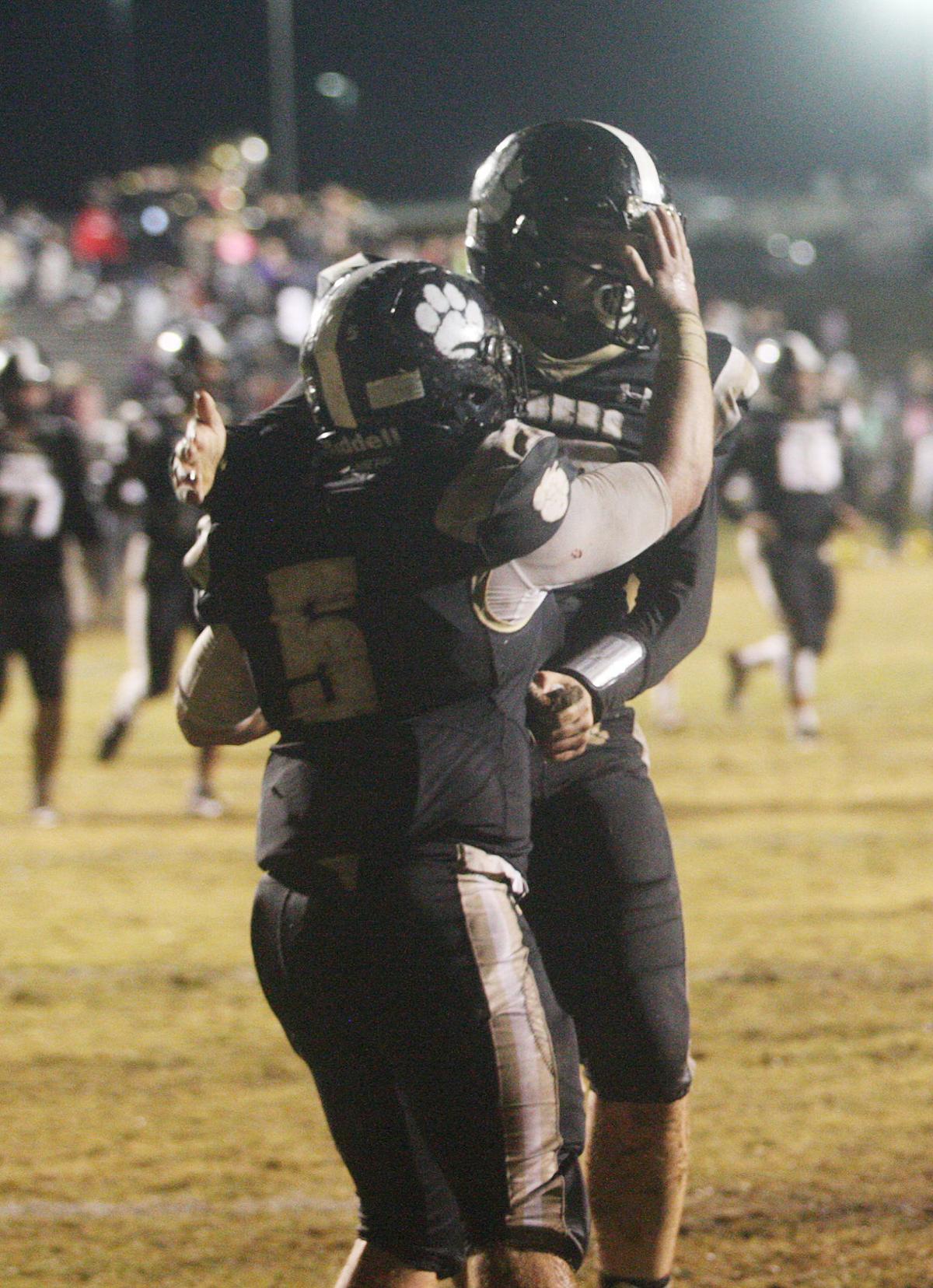 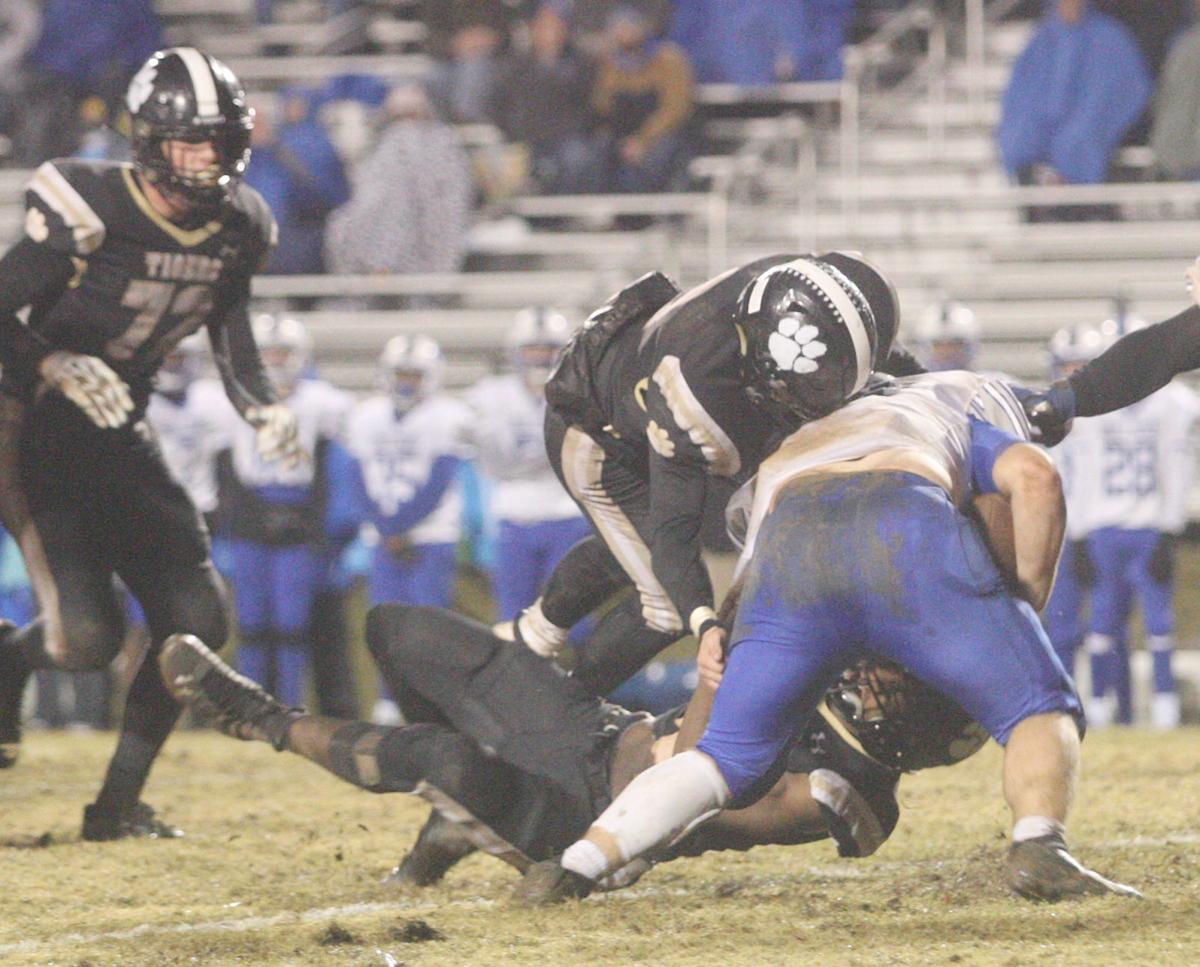 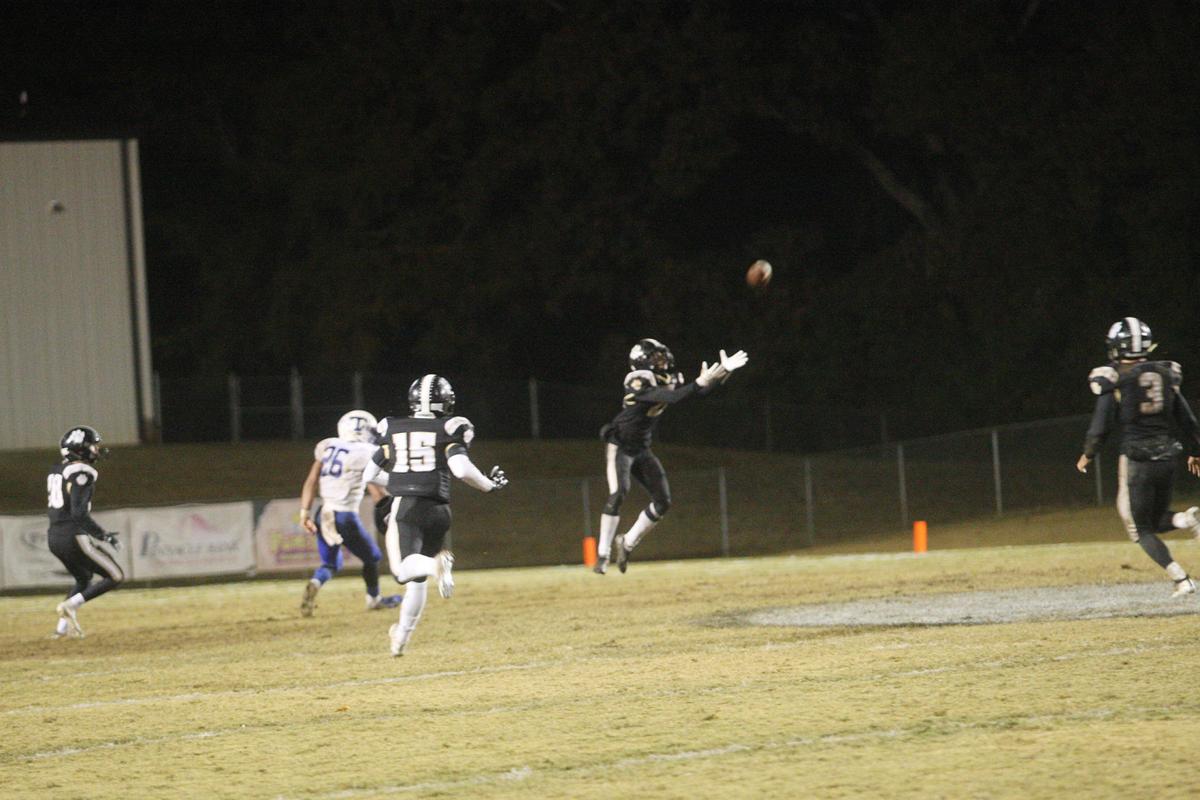 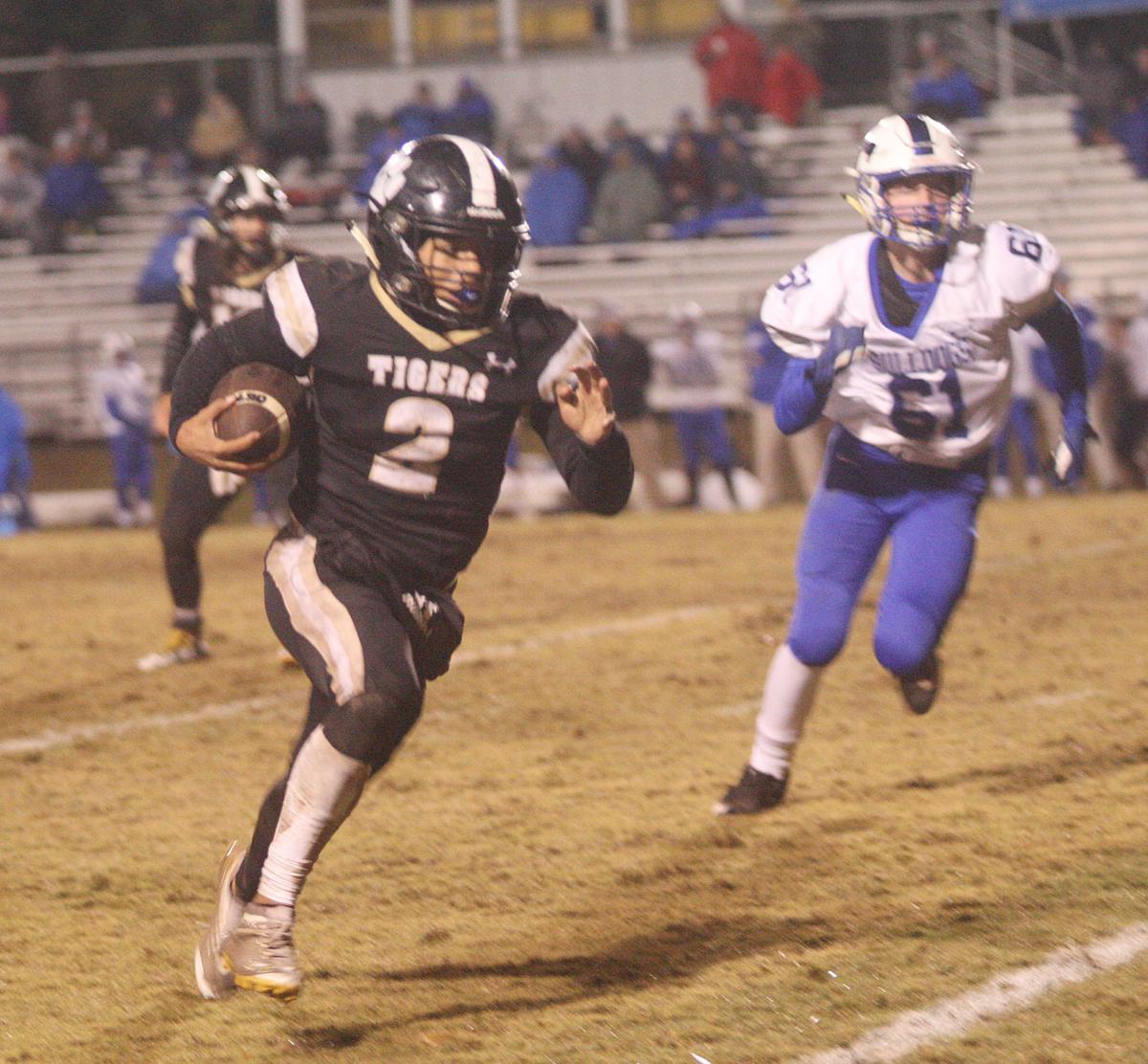 Commerce's Dreylan Martin breaks into the open field in the Tigers' 23-6 win over Trion Friday (Nov. 15).

The Commerce football team takes the field Friday (Nov. 15) before its first-round playoff game with Trion. The Tigers won the game 23-6.

Commerce's Dreylan Martin breaks into the open field in the Tigers' 23-6 win over Trion Friday (Nov. 15).

It was a night of ponchos, blankets and umbrellas in Tiger town — and mud, lots of mud.

It was also a night of victory.

The Commerce Tiger dream of another state title took a step toward reality Friday as the home squad pounded out a 23-6 win over Trion on a muddy field in a cold drizzle.

Commerce head coach Michael Brown said the playoff showdown in dismal weather was not a time to get fancy with the play calling. Just keep it simple, he said.

“The playing field was not in good condition tonight,” said Brown. “We stuck with a very conservative game plan to kind of put it on the shoulders of our offensive line. It was raining off and on all night and the field is as wet as it can be. I just felt like if we came out here and took too many chances, that ball was going to be on the ground.”

The plan worked. Commerce (9-2) won the field position battle Friday, kept miscues to a minimum and pushed on to the round of 16 in the Class A state playoffs. They’ll travel to Lincoln County at 7:30 p.m., Nov. 22 to face the traditional powerhouse. The Red Devils (8-2) are enjoying another good season and had a first-round bye.

Commerce senior fullback Samuel Roach is fired up for the opportunity to go to Lincolnton.

“A lot of our coaches played against them in a couple of state championship games and stuff like that,” he said after the win over Trion. “So we’re ready to go down there and give them a run for our money and give them everything we got.”

Brown said the matchup with Lincoln County will be a challenge.

“It’s been awhile since we played them,” said the coach. “It’s always been a good game with them and I know that they’re having a heck of a year. They have a big running back that’s really good and we’re going to have our work cut out for us.”

The coach said he’s proud of his guys for advancing in the playoffs. He said the Trion Bulldogs (5-6) have their share of bruisers.

Trion hung close in the first half. Commerce got on top early with a 33-yard field goal by Eryck Diaz with 3:01 to go in the first quarter. The Tigers pulled ahead by two scores with 8:08 to go in the second quarter on a one-year touchdown run by Roach. The point-after attempt failed and Commerce led 9-0.

Trion fumbled the ball on the ensuing kickoff. Commerce appeared to recover the loose ball, but officials ruled the Bulldogs had possession. Trion appeared to be in trouble in the drive, but on third-and-11, the Bulldog quarterback lofted a ball about 30 yards down the center of the field for a completion at midfield. The Bulldogs found their only offensive spark of the night, driving in for a score moments later from five yards out with 3:18 to go before intermission.

It was all Commerce from there.

Senior Tiger running back Daniel Wilson took an option pitch 10 yards for a score with 3:26 to go in the third quarter to put the home team up 16-6. Roach added the final score of the night with a one-yard touchdown run with 9:11 to go in the game. Wilson picked off a Trion pass with 7:18 to go. And the Tigers managed to run out the clock for the victory.

“We came out in the second half and played really good defensive football,” said Brown. “I’m just proud of our kids for getting this first win.”

The coach was pleased with his team’s ground game.

“We about ran them fullbacks to death,” he said. “Sam Roach and Josh Frates, they took the workload tonight. And we kind of put it on their shoulders. And I thought the halfbacks did a good job being unselfish tonight and blocking for those guys.”

Roach said he felt like the team knew how to handle the conditions.

“It’s starts with practice,” he said. “The practice field wasn’t in the greatest shape. Like Coach Brown said before the game, we play on a swamp every day. We came out here, had a little bit of slump in the first quarter, the first half. The defense played well, then we came back out and in the second half and we busted them. I’m proud to be a part of this team.”

“It was a big win last week,” he said. “I feel like that fueled us going through this week at practice. I’m proud of these guys and we’re ready to go down to Lincoln County.”