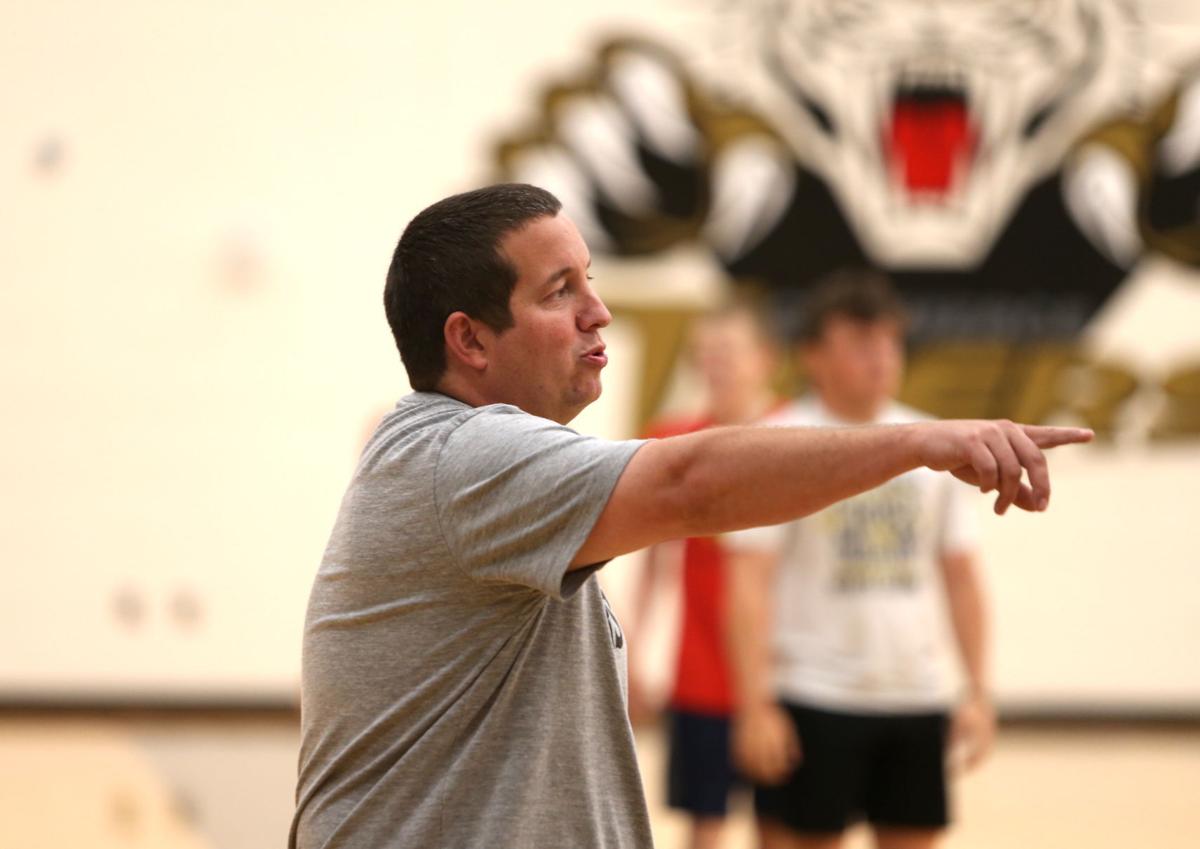 Commerce boys' basketball coach Russ Gregg guides his team through a recent offseason practice. Gregg has coached the Tigers since 2017, following in the footsteps of his father, Rex, who coached the program for 27 years (1980-2007). 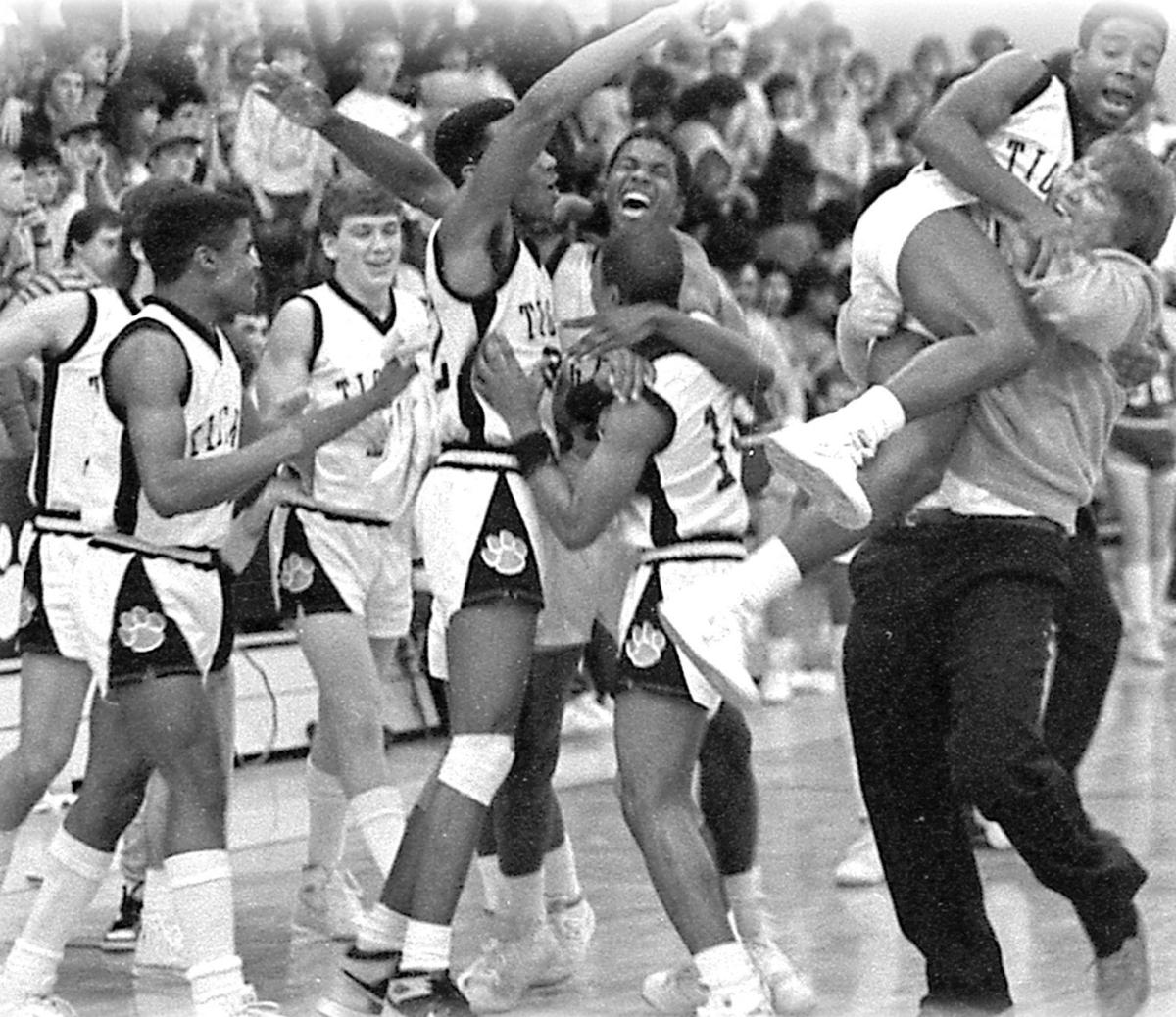 Commerce's Rex Gregg celebrates after a Tiger win in 1986. Gregg coached the Commerce boys' basketball program for 27 seasons (1980-2007). His son, Russ, has followed in his footsteps, as he'll enter his fifth season as the Tigers' coach this winter. 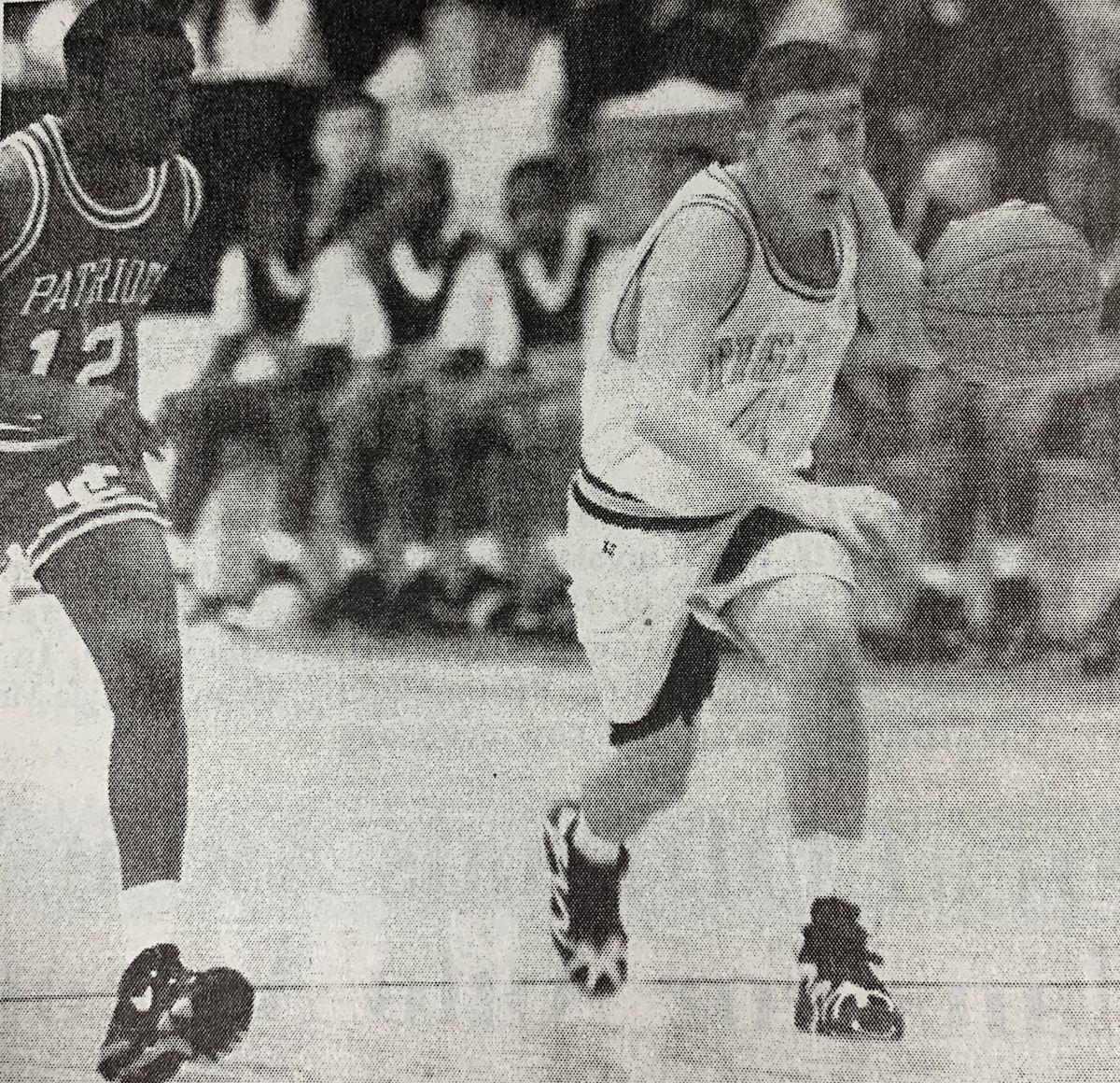 Russ Gregg, shown here in 1996 during a 37-point effort against Oglethorpe County, was a star player for his father, Rex, in mid-1990s. Russ has been the Tigers' head basketball coach since 2017. 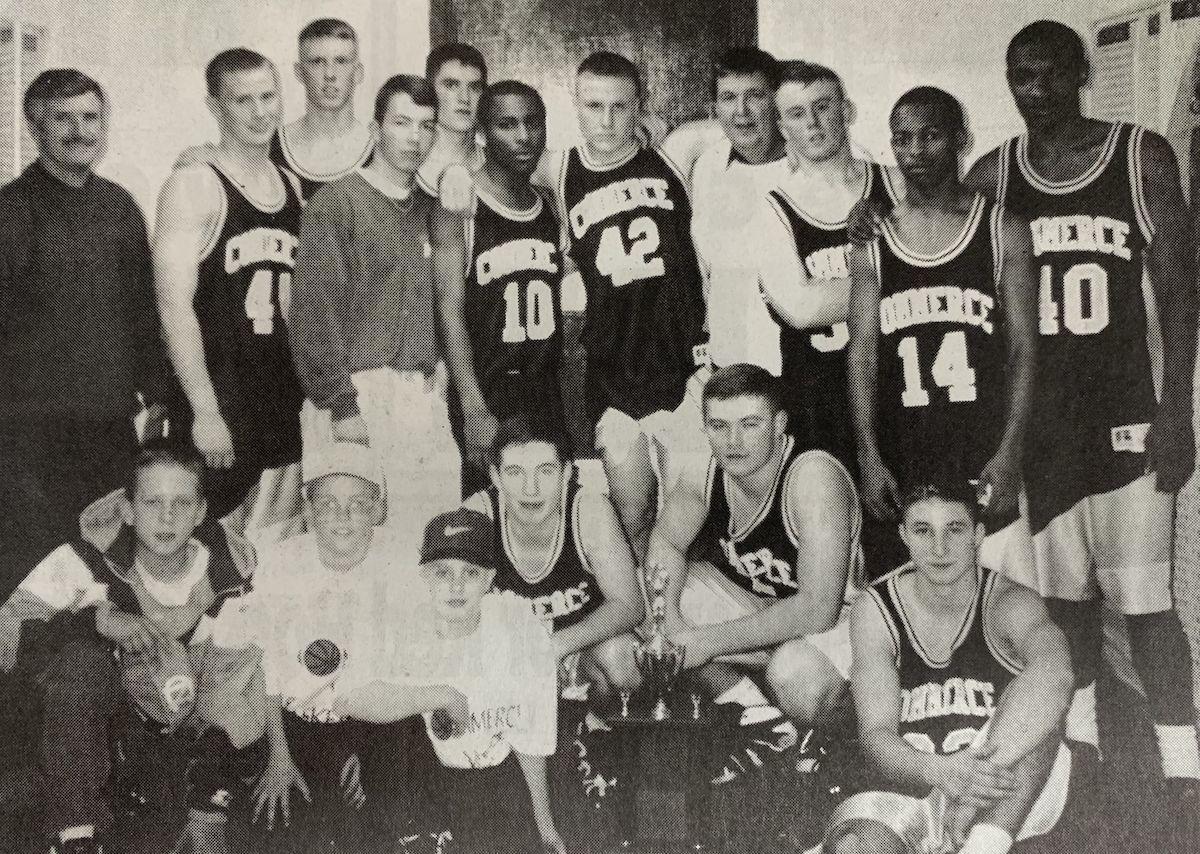 Rex Gregg's 1995-96 team poses with the subregion championship trophy, one of six Gregg earned during his Commerce coaching tenure. His son, Russ, was a star player on that team. Russ has served as the Tigers' head coach since 2017.

Commerce boys' basketball coach Russ Gregg guides his team through a recent offseason practice. Gregg has coached the Tigers since 2017, following in the footsteps of his father, Rex, who coached the program for 27 years (1980-2007).

Commerce's Rex Gregg celebrates after a Tiger win in 1986. Gregg coached the Commerce boys' basketball program for 27 seasons (1980-2007). His son, Russ, has followed in his footsteps, as he'll enter his fifth season as the Tigers' coach this winter.

Russ Gregg, shown here in 1996 during a 37-point effort against Oglethorpe County, was a star player for his father, Rex, in mid-1990s. Russ has been the Tigers' head basketball coach since 2017.

Rex Gregg's 1995-96 team poses with the subregion championship trophy, one of six Gregg earned during his Commerce coaching tenure. His son, Russ, was a star player on that team. Russ has served as the Tigers' head coach since 2017.

His father, Rex, one of the best-known coaches in the area for decades, spent 27 years court side (1980-2007) as Commerce’s head boys’ basketball coach. Russ, the Tigers’ head coach since 2017, will enter his fifth season on the job this winter, marking the 32nd season in the last 42 that a Gregg has coached the Tigers.

“Some people want to be a doctor or a lawyer,” Russ said. “I wanted to be a basketball coach.”

In many ways, that’s not surprising.

“So, we come from a family background,” said Rex, who amassed over 300 coaching wins and six subregion championships at Commerce.

Commerce High School certainly constitutes a large chunk of the Gregg family coaching tree, and Russ has been a part of Commerce basketball as long as he can remember — even before.

He said he recently uncovered a 1981 yearbook in which he’s pictured as a toddler. The back of his shirt read “team mascot.”

“When he was born, he was pretty much in the gym,” Rex said. “I remember when he was a baby, I’d take him with me, put him down in the corner and hope nobody hit him.”

One of Russ’s earliest Tiger-basketball memories is of Hal Lamb setting the school single-game scoring record with 52 points in 1983 at Towns County. Lamb wore No. 4, and from that point on, so did Russ.

As a coach’s son, Russ was a self-described “gym rat” with full access to the venerable old Commerce gym, which was razed over a decade ago.

When it came his time to play in the old building, Russ proved to be an outstanding outside shooter and player for his father’s mid-1990s teams. He sank a school-record 262 3-pointers and racked up over 1,206 career points. He remains one of the program’s all-time leading scorers.

All the while, he knew he wanted to do what his dad did and had his career arc all mapped out. He’d start in Commerce and work his way out to the college ranks. As it turns out, the plan unfolded, just in reverse.

Russ coached one year of men’s college basketball as a graduate assistant at Southern Wesleyan and spent the next 15 years coaching women’s college basketball, including six as a head coach at Erskine, before returning to Commerce in 2017 to a rebuilding project. But coming home had to do with much more than just basketball after his mother, Cynthia, was diagnosed with ALS.

He initially hadn’t considered the Commerce boys’ job when it came open about two weeks after his mother’s diagnosis. But a stopover to his parents’ house en route to a Braves’ game changed that.

“On our way leaving, my mom still had a little bit of speech left, and she walked around to the side of the car and she said, ‘I want you home,’” Russ said. “And I pretty much knew then that I needed to come home. And I wouldn’t trade it for anything.”

Cynthia passed away in 2019 at 65. Taking the Commerce job allowed Russ and his son, Ross, to spend the final two years of her life with her. It’s time he’ll forever cherish.

Rex said Russ returning home to be by his mother’s side is “a testimony to him as a kid.”

In discussing the job opening with his Russ, Rex said his son told him that he also wanted to come home to help restore the program. Rebuilding hasn’t been easy, but Russ guided Commerce to 12 wins in 2019-20 and then back to the state tournament for the first time in nine years this past winter when his team reached the Round of 32 in the Class A-Public bracket.

And the Tigers proved to be a tough out all year long in 2020-21 despite a sub-.500 record. Commerce lost by a single basket to eventual state champion Towns County during the regular season. It also gave eventual state runner-up Chattahoochee County all it could handle in their first-round state-tournament matchup. Fifteen of the team’s 19 losses came to state-tournament teams.

“When you’re building a program, you want to be playing your best basketball at the end of the season, and I felt like we were doing that last year,” Russ said.

He hopes to build on that heightened competitiveness as Year 5 begins this winter. Russ is working with an offseason practice roster of 25 players compared to the six or seven he had leading into his first season.

Russ, as he makes his own way as the Tigers' coach, has naturally gleaned a wealth of hoops knowledge from his father over the years. The main lesson, however, has had nothing to do with basketball.

“I learned how to treat people,” he said.

Russ noted the extensive list of sports, in addition to basketball, he watched his father coach while growing up. That list included football, track, baseball, tennis and golf.

Despite their father-son bond, their basketball ideology is somewhat different. Rex — who served as Russ’ assistant for three years at Erskine and one season with the Commerce boys — would get the ball inside and work inside-out. Russ, like his playing days, is a little more partial to perimeter-shooting.

The delivery of the coaching is a bit different, too. Rex pointed to the changing times since he coached.

“I’m not going to say the game has changed as much as people have changed,” he said. “Where I rode players pretty hard, he’s a lot more milder than I am, but I understand why he is.”

But some things are very much the same.

Russ, like his father before him, is watching his son grow up around Commerce basketball. Ross, age 6 — who could shoot on a regulation-size goal with a regulation-size ball at age 5 — is becoming very much the gym rat that Russ was over three decades ago.

“It’s almost full-circle,” Russ said. “Because I see some of the things that he’s doing that I did back when I was 6 years old like he is. He really looks up to the players. They’re his big brothers.”

In fact, Russ said that his son’s favorite babysitters are the players, noting that Jackson Morris and Cayden Lord, a pair of rising junior guards, recently watched him.

“That tells you a lot right there, and I want my players to feel like a family,” Russ said.

As he approaches his fifth season, few coaches are as strongly tied to their jobs as Russ is tied to his. It’s a job tied to family and community and a bond between fathers and sons.