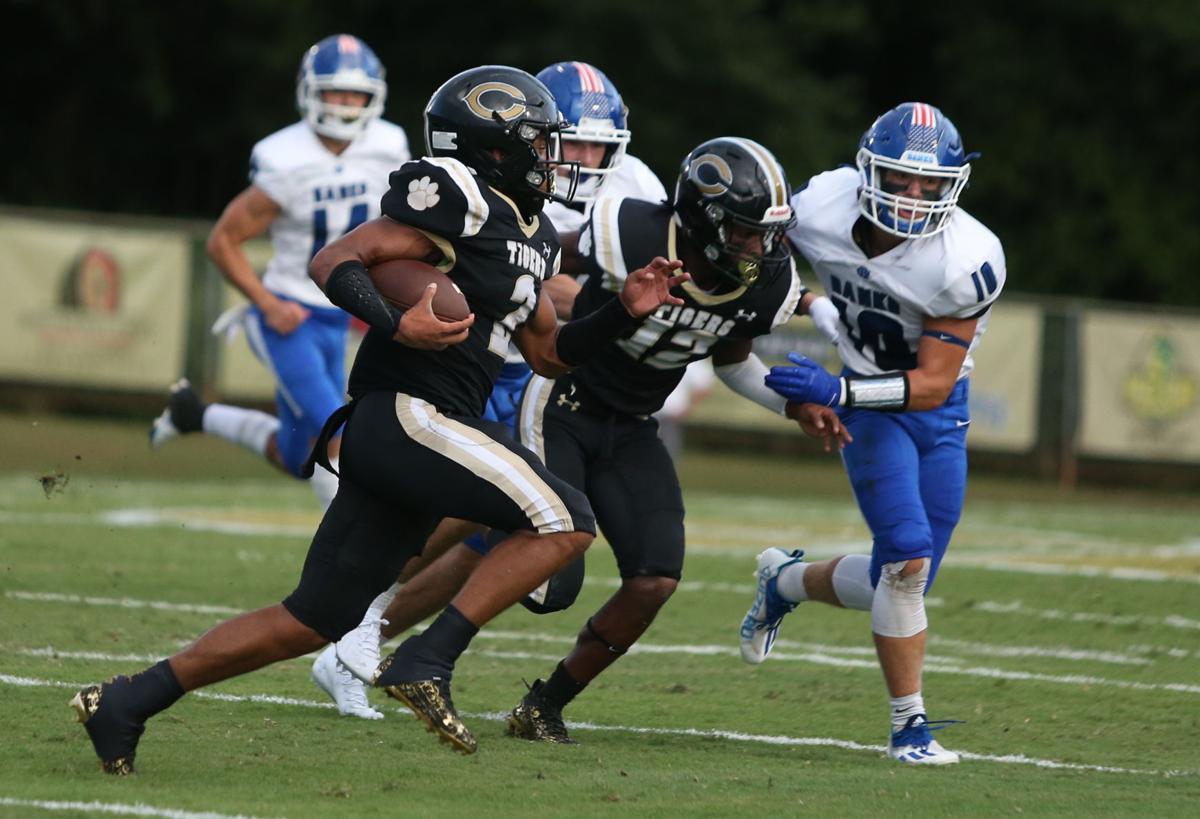 Commerce's Dreylan Martin gets to the corner during a 71-yard touchdown run in the Tigers' Friday (Aug. 20) win over Banks County. 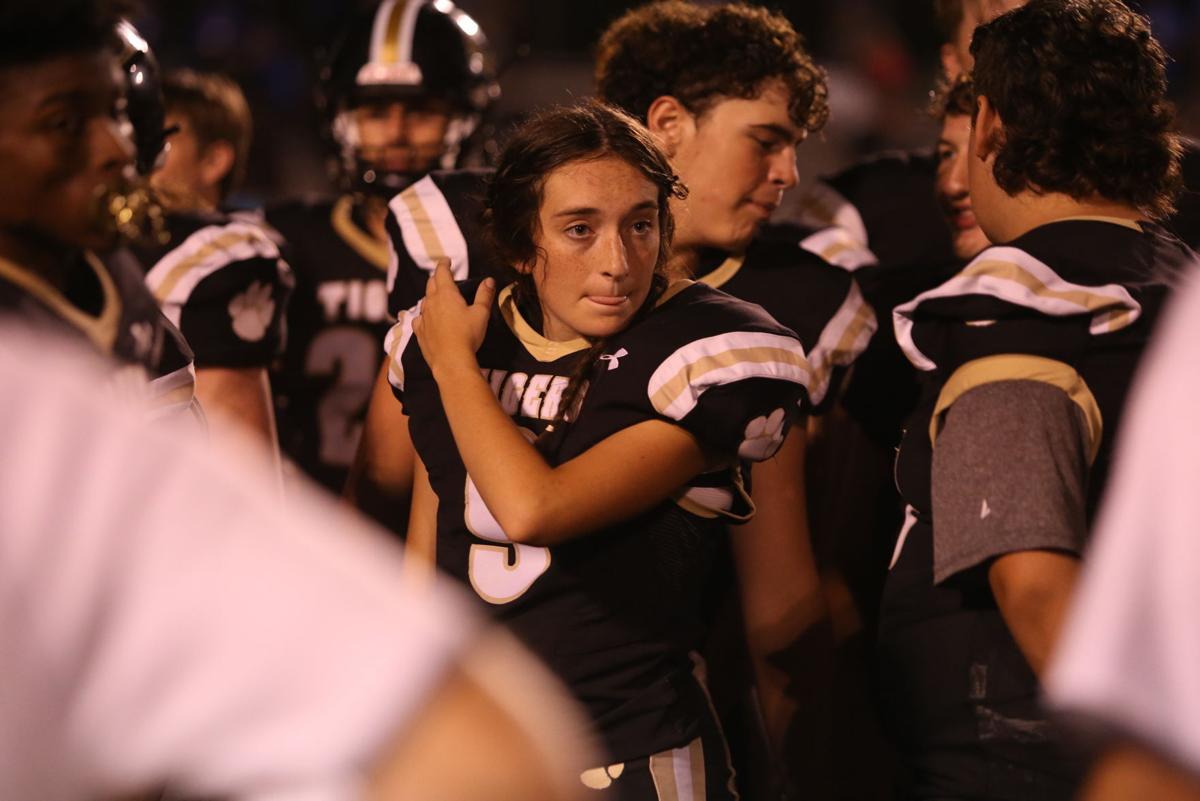 Ivy Tolbert made history Friday (Aug. 20) by becoming the first-ever female to score a point in a Commerce football game. Tolbert converted a first-quarter extra point and then provided a clutch 26-yard, third-quarter field goal in the Tigers' 10-0 win over Banks County.

Commerce's Dreylan Martin gets to the corner during a 71-yard touchdown run in the Tigers' Friday (Aug. 20) win over Banks County.

Ivy Tolbert made history Friday (Aug. 20) by becoming the first-ever female to score a point in a Commerce football game. Tolbert converted a first-quarter extra point and then provided a clutch 26-yard, third-quarter field goal in the Tigers' 10-0 win over Banks County.

Though Commerce had to weather an hour lightning delay and withstand a litany of penalties to do it, the Tigers made sure their new coach had a happy debut.

The win marked Commerce’s 17th-straight victory over the Leopards.

“It’s a great Friday night experience,” Hollars said of his first game as Tigers’ head coach. “There’s nothing like it. I think the Atlanta Journal-Constitution said it’s the best job in the state, and I feel very honored to have the opportunity to coach here. It’s great to be at a place where football matters, and the community really rallies around our team … I’m happy for everyone involved. It ain’t about me. The Tigers are 1-0. That’s all that matters.”

Dreylan Martin rushed for 115 yards and scored the Tigers’ only touchdown, a 71-yard romp on the second play of the game, as Commerce improved to 32-2 all-time against Banks County.

Sophomore place kicker Ivy Tolbert made history in the win, adding the extra point after Martin’s touchdown to become the first female to ever score a point in a Commerce football game.

She later provided a clutch field goal in the third quarter, a 26-yarder, to put the Tigers up 10-0 for what would end up being the final margin of victory.

Commerce’s defense secured the shutout, turning the Leopards away on fourth-and-5 from the Tigers’ 15 in the final minutes of the game.

“Give credit to Banks County,” Hollars said. “They’re a well-coached team and came in here with a lot of spirit and a lot of fight. We know it’s a great rivalry. We know we’re going to get their best punch.”

The Tigers led almost immediately when Martin took a toss sweep and broke free down the right side line for his 71-yard score at the 10:47 mark of the opening quarter. Martin is coming off an 859-yard season a year ago.

“Dreylan has been a leader for us all summer and all throughout camp … he gives everything he has for this program,” Hollars said. “That’s what I think our team has come to expect out of him.”

After Martin’s quick touchdown, the Tigers began to get behind the chains, however. A marathon 22-play drive ultimately yielded no points as the time-consuming possession was undone in part by three penalties.

“I think our second drive of the game, it started to get ugly,” Hollars said. “What I mean by ugly is we’d move the ball and then it seemed like about one of every four or five plays, we’d set ourselves back with a penalty.”

Lightning also came during that possession, sending the teams to the locker rooms for approximately an hour.

Banks County only possessed the ball twice in the first half, though the second included a 48-yard touchdown pass negated by a blind-slide block.

The Tigers’ only other points of the night came on a 71-yard third-quarter drive that set up Tolbert’s 26-yard field goal attempt which she sailed through the uprights to give Commerce a 10-point cushion with 1:26 left in the third quarter.

“That young lady, she’s tough,” Hollars said. “She’s a tough young lady to come in and make your first two kicks of your high school career. The field goal was such a critical play in the game. And we believe in her. The kids believe in her. She’s a young lady who’s just humble and has confidence in herself and believes in herself.”

Banks County came up empty in three fourth-quarter drives as Commerce posted a shutout in a season opener for the first time since 2016 when it beat Banks County 43-0.

“Our defense bent, but, boy, did it come up with big plays every time we needed it,” Hollars said. “Great job by the defense.”

Commerce travels to Union County next Friday (Aug. 27). Hollars said his team has “a lot to clean up.”

“But I’m very happy for the kids, and I’m proud of them,” he said. “They know we’ve got to get better. Everybody knows that. But at the end of the day, we reached our goal, and that was to come out of here with a ‘W’ in a rivalry game.”