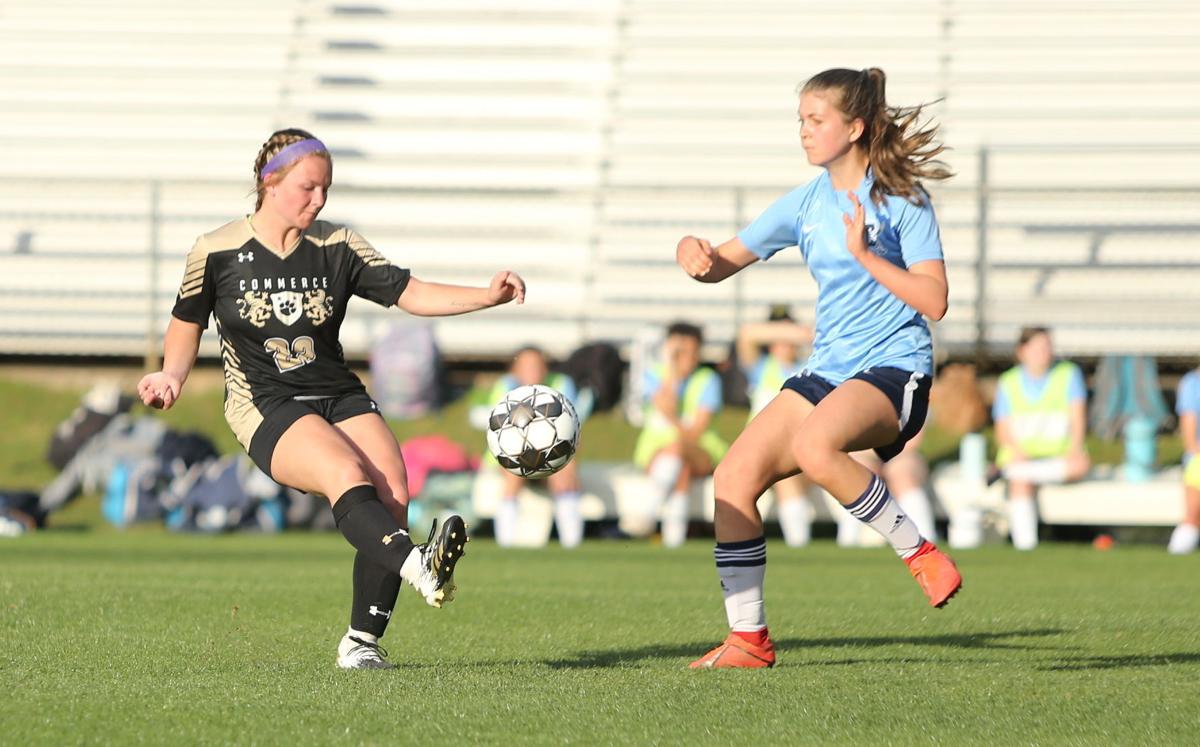 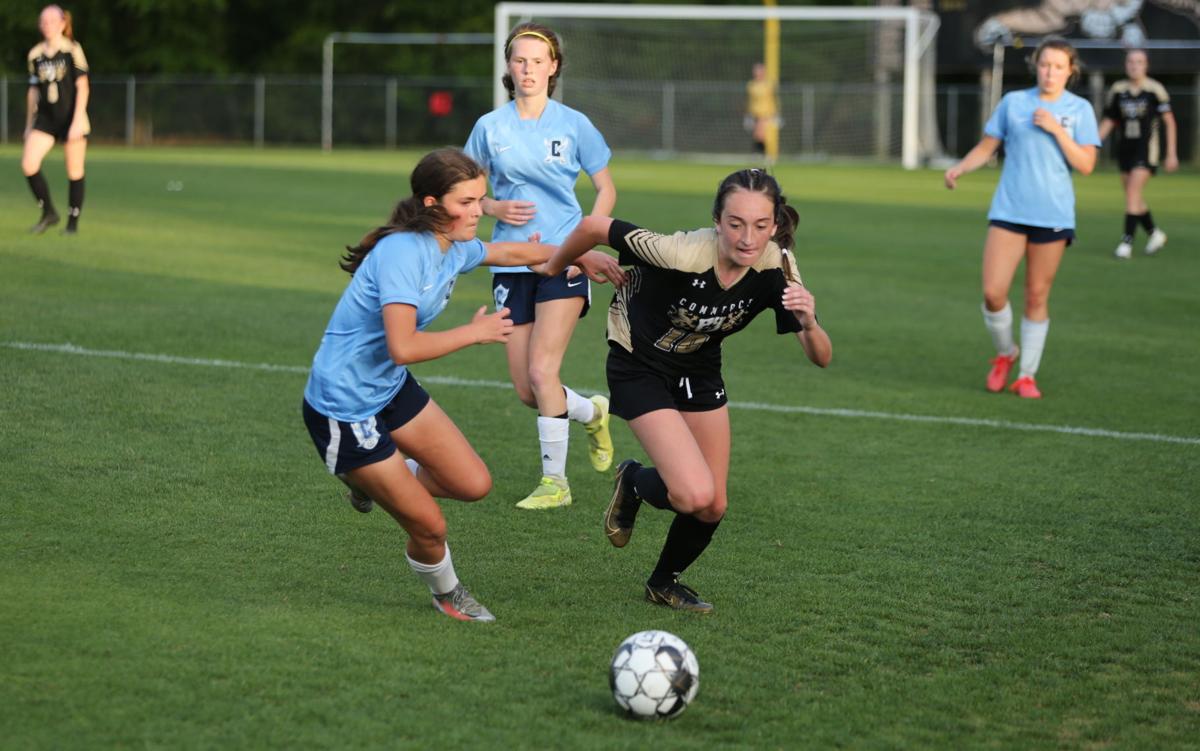 Commerce Ivy Tolbert and an Atlanta Classical Academy (ACA) player race toward the ball in the Tigers' upset loss to ACA in the second round of the Class A-Public girls' soccer state tournament.

Commerce Ivy Tolbert and an Atlanta Classical Academy (ACA) player race toward the ball in the Tigers' upset loss to ACA in the second round of the Class A-Public girls' soccer state tournament.

What very well might have been the state championship game for girls’ Class A-Public was played Monday night in the second round.

Unfortunately for Commerce, it ended in shocking and heartbreaking fashion for the No. 1-ranked Tigers, who had designs on winning a state title.

After 100 minutes of play and four rounds of penalty kicks, Atlanta Classical Academy’s Avery Braswell sent the game-deciding PK into the bottom left corner of the frame as the second-seeded Cavaliers won a penalty-kick shootout 4-3 in a 2-1 upset victory over top-seeded Commerce in the Sweet 16.

“The girls wanted it, but I think this team wanted it a little bit more,” Tiger coach Deanna Shaw said. “Our girls have worked really, really hard. We’re out here a lot of days during the week. We played 19 games trying to get us to the point that we could compete in that state championship. We just came up a little short.”

The loss, after 18-straight wins this year, ended the season of a Tiger team who’d scarcely been challenged this year despite playing seven games during the regular season against teams currently ranked in the top 10.

“I think we ended up drawing one of the better teams in the league, for sure,” Shaw said of ACA. “I don’t think we could have asked for a better, stronger match … This is the first game all season we’ve really been challenged. So we needed that challenge. It just stinks that ended the way it did.”

Atlanta Classical Academy (ACA) pulled off the win by utilizing its big, physical backline and as an answer to Commerce’s high-scoring forwards, cutting off space and opportunities in the box. A Tiger team averaging 10.2 goals per game was limited to a single score.

“They closed the gaps on us,” Shaw said. “We didn’t really have any room to work in.”

Shaw said her team didn’t expect that level of physicality from ACA despite considerable film study.

“We went and watched their game against Crawford County, and they didn’t look like they did tonight. They looked fabulous tonight.”

Commerce (18-1) had attempted to play ACA (9-3-1) during the regular season, but the Cavaliers canceled “two or three times,” according to Shaw.

In Monday’s game, Ivy Tolbert broke a scoreless tie in the 19th minute, lacing a shot from well outside the box over the ACA keeper’s head and off her finger tips for a goal. The lead held until the 47th minute, when ACA equalized with what would be the final goal of the game.

The Tigers dodged some near-misses in regulation, however, including a high-arcing deep ball struck by ACA’s Sofia Wurm that glanced off the crossbar in the 62nd minute and a Cavalier shot from inside the box in the 65th minute went just wide of the right post. Commerce keeper Kendall Peters also produced a save on-frame in the 67th minute following an ACA free kick into the box.

The Tigers had some near-misses on scoring opportunities themselves. Tolbert struck a free kick in the 79th minute that banged off the crossbar. Tolbert then went on a run in the 80th minute but was tackled in the box in the closing seconds of regulation.

In overtime, Chloe Diaz launched a shot from the left of the box during the 89th minute that smacked the crossbar.

Following two scoreless overtime periods, the contest moved to PKs, where Abby Tolbert gave Commerce a quick 1-0 lead, converting a kick into the top right corner of the frame.

Diaz later gave the Tigers a 2-1 edge in the shootout by placing a kick inside the left post. But ACA converted its next two kicks, giving the Cavaliers a 3-2 lead after four rounds of PKs. Commerce’s Ermay Vasquez opened the fifth round of PKs with a shot inside the right post, tying the shootout 3-3, before Braswell ended it with her successful kick.

In the loss, Shaw praised senior defender Gabbie Deaton with her play at left back.

“She played the best game she’s ever played,” she said.

“They left it all out there on the field,” she said, “and that’s all we could ask.”

Commerce’s goal starting the season was to settle “unfinished business” from last year's COVID-shortened season, and that’s a goal the Tigers will have to carry with them again into next year now.

The Tigers, however, will certainly not lack for talent as the prolific duo of Ivy Tolbert and Diaz, who combined for 130 goals (each scored 65) and 100 assists returns next season, along with a host of young talent. That group includes Kate Hill, a sophomore, who tallied 23 goals and 24 assists.

“We’re loaded with some underclassmen,” Shaw said. “We’re only losing five seniors. Those five seniors contributed a whole lot to this program, but we still have some potential, absolutely. We expect to compete again next year and for years to come.”