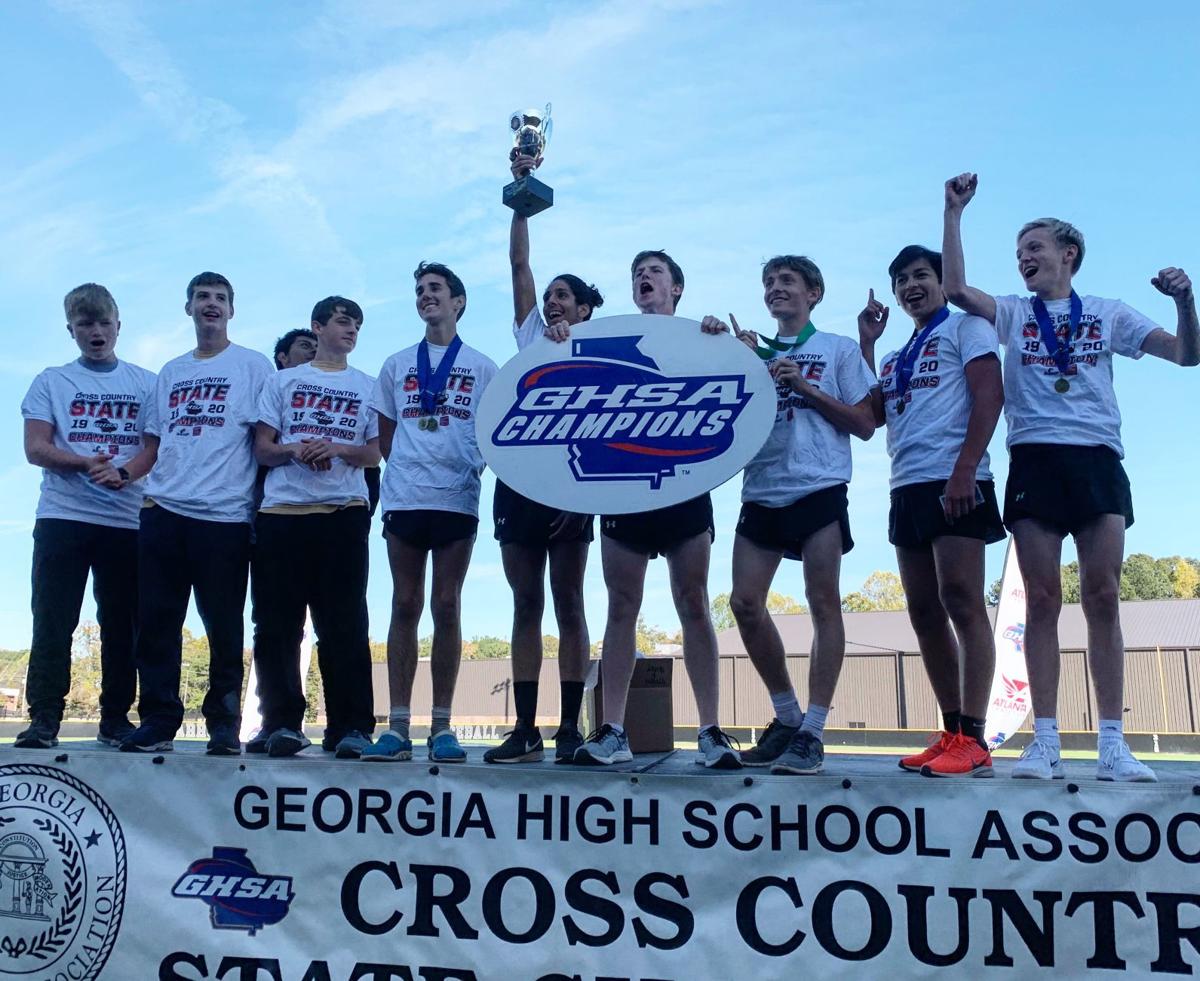 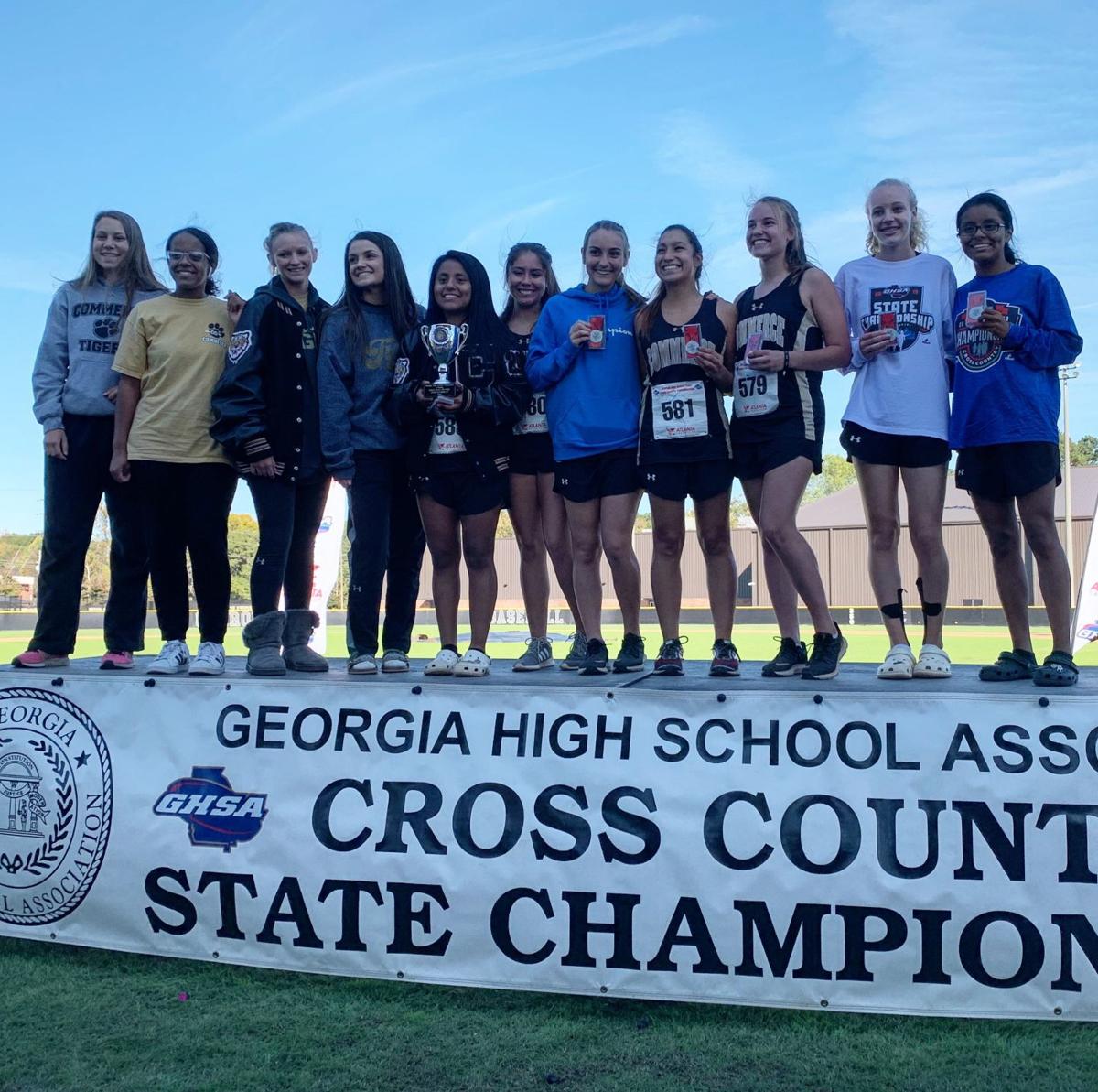 After a third-place finish at area, the Commerce girls' cross country team saved its best for last and placed second in Class A Public at Saturday's (Nov. 2) state meet in Carrollton.

After a third-place finish at area, the Commerce girls' cross country team saved its best for last and placed second in Class A Public at Saturday's (Nov. 2) state meet in Carrollton.

CARROLLTON — Commerce’s cross country team has been on the placers’ podium many times in Carrollton. But the view might have seemed a little bit different Saturday.

The Commerce boys climbed the podium as champions for the first time in program history, dominating Class A Public with a 53-point win over second-place Schley County.

“I know that we did everything that we needed to do to push ourselves to the top,” said Demarco Hernandez, the team’s lone senior. “Schley County was close, but I just knew that we had the ability to beat them, and that’s exactly what we did.”

Martin hammered the hilly Carrollton course in 17:02.85, winning the race by 29.97 seconds over Hernandez. Hernandez finished the race with a 17:32.82

Morris gave the Tigers their third finisher in the top five, running a time of 18:21.47.

“We were confident that Brandon and Demarco would go 1-2,” said Commerce coach Mark Hale, who is in his 22nd year with the program. “I told J.J. his goal needs to be top five — he got fifth.”

Kade Morgan turned in a strong No. 5 showing with an 18th-place finish and time of 19:36.27. Morgan’s performance didn’t go unnoticed.

“Our fifth runner, Kade Morgan, did phenomenal compared to how he has been,” Martin said. “That was about a minute faster than average from his normal runs, so that’s really good.”

Said Hale, “I want to call out Kade Morgan because we had aimed for him to be 30th or better, and he came in 18th. He finished ahead of all but two of Schley’s runners … that sealed it.”

“They have a lot of potential, if they put in the time in the summer like our front runners do,” Hale said.

Hale said he could not have scripted a better performance for his team.

“No, it went absolutely as good as it could have gone,” he said.

Commerce’s win came after a second-place finish in Carrollton last year. The Tigers hadn’t forgotten about that.

“We had a taste of what a victory could have been,” Hernandez said. “And I think that mainly took us to train over the summer, and we did it all, and I’m really happy.”

Martin, too, pointed to summer work, saying he logged lots of miles with Hernandez and Morris.

“I ran with them a lot this summer,” Martin said. “I feel all three of us helped each other improve over the summer.”

“We benefitted from the track win,” Hale said. “A lot of those guys helped the track team win it, and the track program helped win this for us. We kind of help each other out.”

With most all of his teammates returning, Martin said the goal next year is to win the state cross country title in even more convincing fashion.

Meanwhile, Hernandez, though he’ll be graduated, hopes the Tigers are just getting started in the state championship business.

MARTIN A CHAMP AFTER SECOND-PLACE FINISHES

As impressive as a runner-up showing might be, Martin was done with second-place finishes. The Tiger junior’s state title came after placing as runner-up at last year’s state cross country meet and then again in May at the state track and field meet, when he lost out narrowly in the 3,200 meters.

“I lost by six milli-seconds,” Martin said of that defeat. “I was on the fence right there. I was going to go out in the summer and just run mileage — so much mileage to where I knew I was going to win next year.”

Martin made good on that, sprinting out to an early lead Saturday and building on it as he winded his way around the two-loop course.

“My strategy was to race how I’ve been throughout the whole entire season,” Martin said. “I didn’t change it at all. I always start off running a pretty fast first mile.”

Cool temperatures Saturday aided his effort on a hilly terrain in Carrollton.

“The course actually felt really good,” Martin said. “I ran a little bit faster than my season average because of it, I think. The only problem with the weather was it was a little bit windy, but that’s something you can run around.”

Hale said he was proud to see his top runner breakthrough with a title.

“He had come in second a few times,” he said. “He had been a two-time area champion, but at the state level, he was waiting to crack it, and he finally did today. So, that was big for him. He’s got a lot of potential. He carries himself like a champion. He expects to win every time he goes out there, and he finally came through and did it.”

Hernandez closed his career with a state runner-up showing, and Hale said that finish was well-deserved.

“About the middle of the year, in one of our little team meetings, I told him I think he’s the hardest-working guy I’ve ever had run cross country,” Hale said.

The coach added that Hernandez “pours his heart and soul into it.”

“It was so gratifying to see him come in and finish like he did today,” Hale said.

LONG-TIME COACH HAS HIS CHAMPIONSHIP

Few cross country coaches in the state have been at their post longer than Mark Hale, and the Tigers rewarded their long-standing coach with his first state title.

Hale, who started with the program in 1998, pointed to Commerce’s overall improvement over the years. Though the results may have ebbed and flowed from year-to-year, the program has continued on an overarching upward trend.

Hale pointed in particular to the year-round dedication of the runners to build the program to this point.

“The big thing that the boys did this year was really devoting time in the summer to putting in miles,” he said, “and it made a difference.”

Hale said the state championship was not only for this year’s team, but for the program past and present.

“We had some of our ex-runners come down and see us today,” Hale said. “I was telling them, ‘You’re part of this, too.’ Because leadership passes down.”

Commerce coaches had hoped the girls’ team would just reach the podium Saturday, but the squad had a surprise in store for them and Class A Public as well.

Behind a second-place finish from Paden Bell, Commerce’s girls finished as state runners-up to ACE Charter, despite placing third at the area meet last week.

“We thought the best we could do today is maybe get fourth and get (to) the podium, and that’s what we were hoping for,” Hale said. “And what stunning news it was to look on there and see we finished second — huge for the girls.”

Bell, who had been battling shin splits, ran a time of 21:46.15 to take runner-up honors behind three-time state champion Gracie O’Neal of Gordon Lee.

“She’s been running through pain, so this was a gutsy performance for her,” Hale said. “Gracie O’Neal is just in another class right now. But there were some people that worried me about Paden. I thought she could go two to anywhere in the top 10, and she ran away with second.”

“They were the only two returning runners on the cross country team,” Hale said. “Everybody else was new that ran, and so just their leadership was so important in developing the team culture that we had that got us to where we were today.”