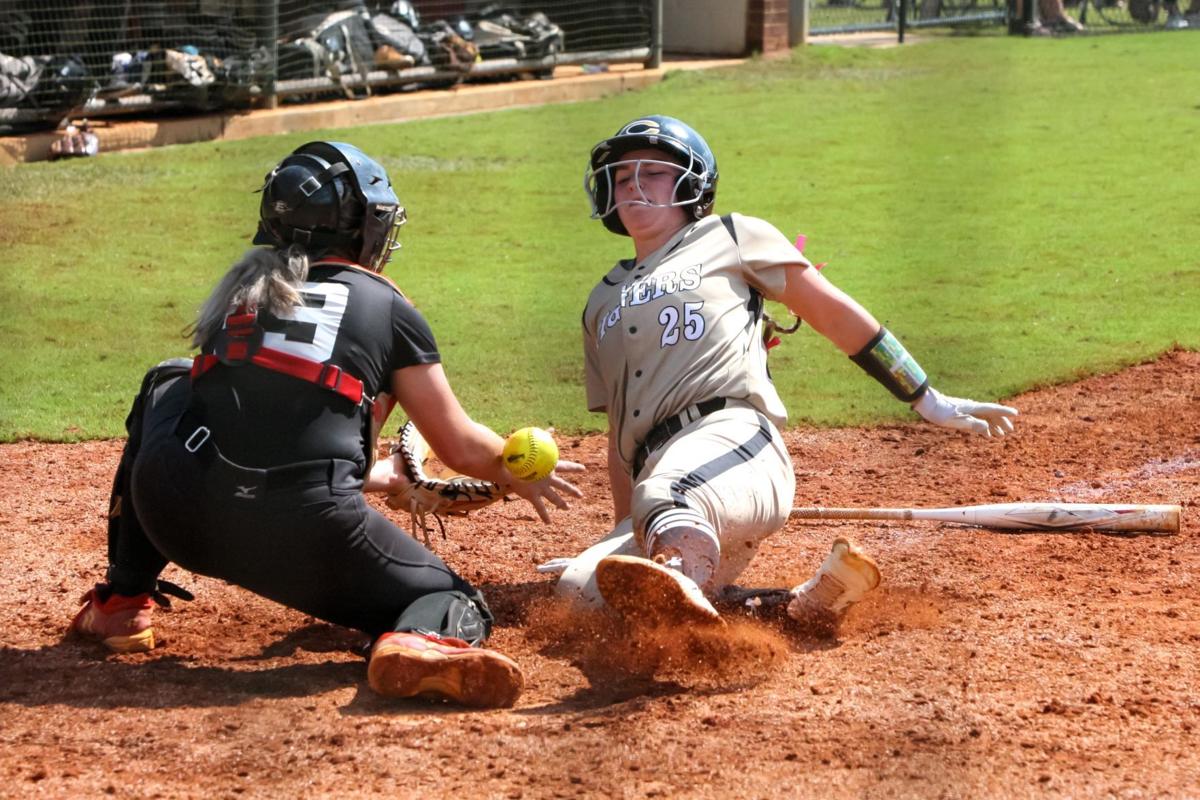 Paige Vickery slides safely into home plate during Commerce's 8-4 victory over Social Circle to force a Region 8-A Championship Game between the two squads. 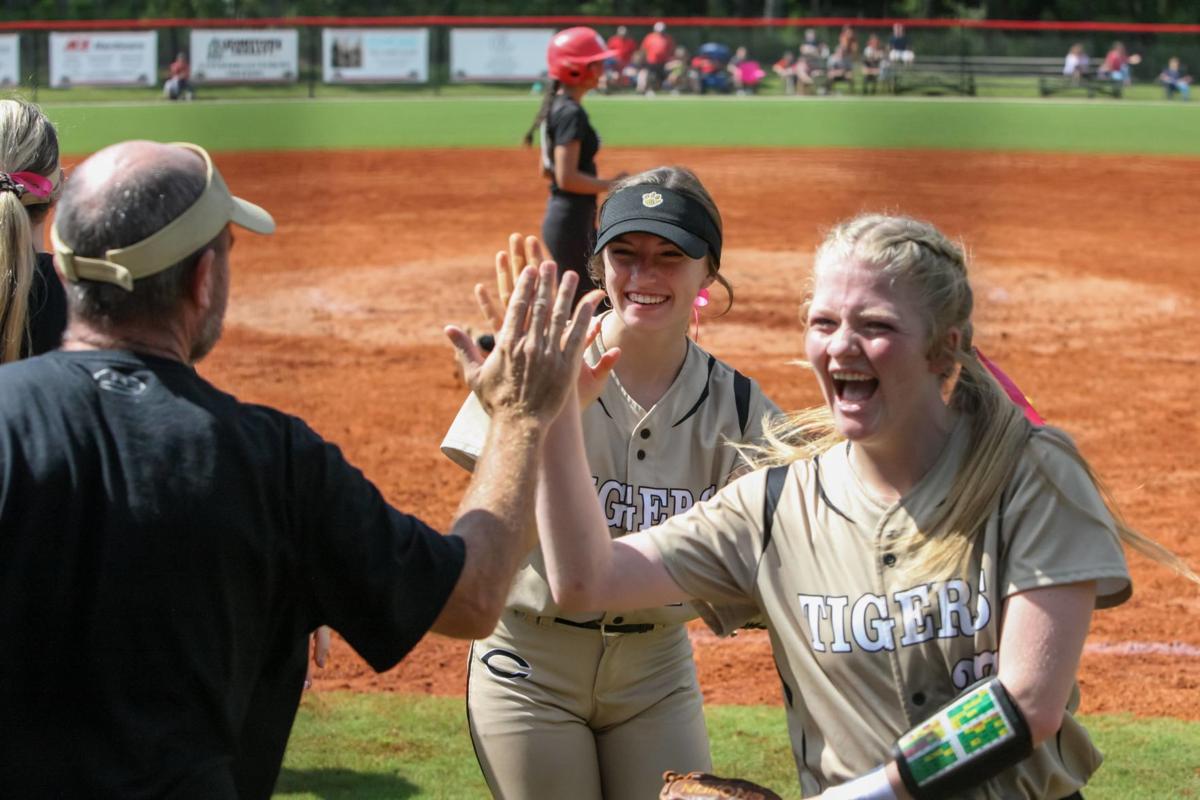 Kylee Taylor is all smiles as she returns to the dugout after a big inning Saturday (Oct. 9) in Commerce's 8-4 win over Social Circle.

Paige Vickery slides safely into home plate during Commerce's 8-4 victory over Social Circle to force a Region 8-A Championship Game between the two squads.

Kylee Taylor is all smiles as she returns to the dugout after a big inning Saturday (Oct. 9) in Commerce's 8-4 win over Social Circle.

SOCIAL CIRCLE – The Commerce softball team entered Saturday (Oct. 9) one game behind Social Circle in the region standings, needing a victory to force a tiebreaker Region 8-A Public Championship Game.

The Tigers defeated the Redskins 8-4 thanks to an enormous eighth-inning rally, and earned the right to play for the region title later in the afternoon. However, Commerce fell victim to a seventh-inning rally in the championship game and lost 11-8.

‘We just have some areas we’ve got to work on,” said head coach Mellisa Mullis. “We know what those are and we’ve just got to get better and handle pressure. This was a good test and we still have time.

“The month of October is about the playoffs. You get a lot of practice time and you’ve got a few days of games. I think we’ll end up meeting them down the road. I hope so for them and I hope so for us, it’s good for our region.”

After leading 4-3 for four-and-a-half innings, Commerce gave up a tying run in the bottom of the sixth inning. The Tigers responded with a four-run rally in the top of the eighth inning to defeat Social Circle 8-4.

The big inning allowed Commerce to win the regular-season region championship, earning it the distinction of being the “home team” in the championship game.

Kylee Taylor started the rally with a leadoff single on a line drive to left field and she sprinted all the way to third base on Carson Hobbs’s sacrifice bunt. Grace Hobbs walked to place runners at the corners before Kendall Peters brought Taylor home with an infield single. Commerce led 5-4 and was far from finished.

Paige Vickery brought home a pair of runs with a line drive to centerfield and she scored on an error at home plate. Commerce led 8-4 when its half of the inning ended. Carson Hobbs shut down the Redskins in the bottom half of the inning to earn the victory.

“Some of the girls really stepped up and got some crucial hits and executed bunts at the right time,” Mullis said.

The Tigers started the game with a four-run first inning. Three of those runs can off the bats of Carson Hobbs and Grace Hobbs. The sisters brought home Anna Taylor and Kylee Taylor with line drives to center field. Carson also scored on Grace’s hit, and Grace scored on Vickery’s line drive to right field.

Social Circle threatened the Tigers’ lead in the bottom of the first inning, but it was unable to take the lead, settling for just three runs. The Redskins finally tied the game in the sixth inning thanks to an error on a throw from the outfield.

Commerce had five fantastic innings on defense, but two bad innings costs it the Region 8-A Public Championship against Social Circle. The last bad inning was a five-run rally in the seventh inning to fall 11-8.

Paige Vickery broke a 0-0 tie with a two-out, three-RBI double in the bottom of the fourth inning. Commerce led 3-0 but surrendered six runs in the top of the fifth innings. The Tigers committed two errors in the inning and allowed six runs after getting the second out. Social Circle led 6-3.

However, the Tigers didn’t stay down. Hailey Harpis hit a solo, leadoff home run in the bottom of the fourth inning to cut the score to 6-4. Later in the inning with two outs, Kylee Taylor doubled to center field, ran to third on a wild pitch and scored on Carson Hobbs’s double. The Tigers trailed 6-5 after five innings.

Vickery tied the game in the bottom of the sixth inning when she scored on Graci West’s double to deep center field. After a pair of strikeouts, courtesy runner Mazie Fields put the Tigers ahead by scoring on Anna Taylor’s double to left field. Anna extended the Tigers’ lead to 8-6 on Kylee’s line drive to center field.

Commerce just needed three outs to win the Region 8-A Public Championship, but a disastrous start to the inning would lead to a five-run rally by the Redskins. Social Circle loaded the bases with no outs because of two walks and an error. A third walk brought one run home, cutting the score to 8-7. Three bases-loaded singles gave the Redskins an 11-8 lead.

The Tigers were unable to respond in the bottom of the inning and settled for the No. 2 seed coming out of Region 8-A Public.

“I told them, ‘I know you fought all the way through, I know you want it,” Mullis said. “It didn’t end the way we wanted it, but at any point, we could have won. It’s not always the best team that wins, it’s who handles adversity the right way.

“We didn’t execute every bunt, we didn’t execute our pitches, we had a hard time hitting our spots. Those are things we can improve on. Just because we go in as a No. 2 seed, it doesn’t mean we can’t win state. It was a good series, it makes us better.”