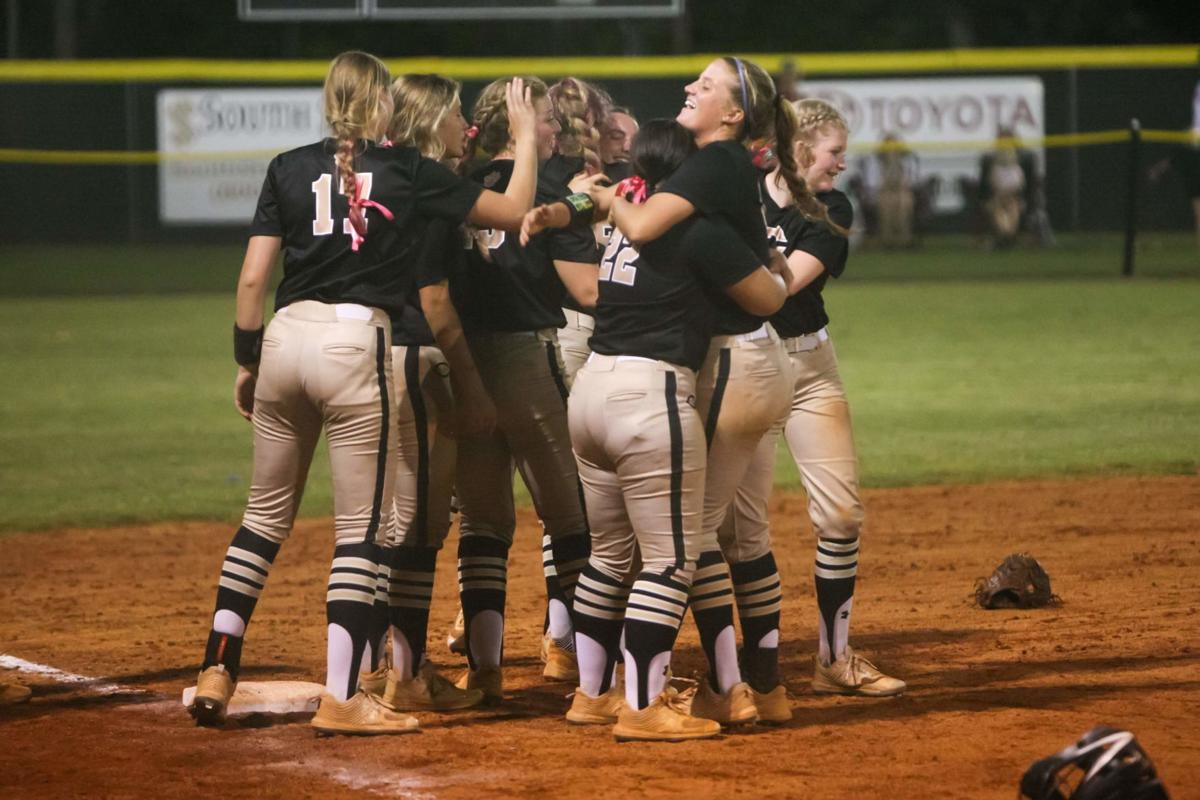 The Commerce softball team celebrate its victories over Armuchee on Wednesday (Oct. 13). 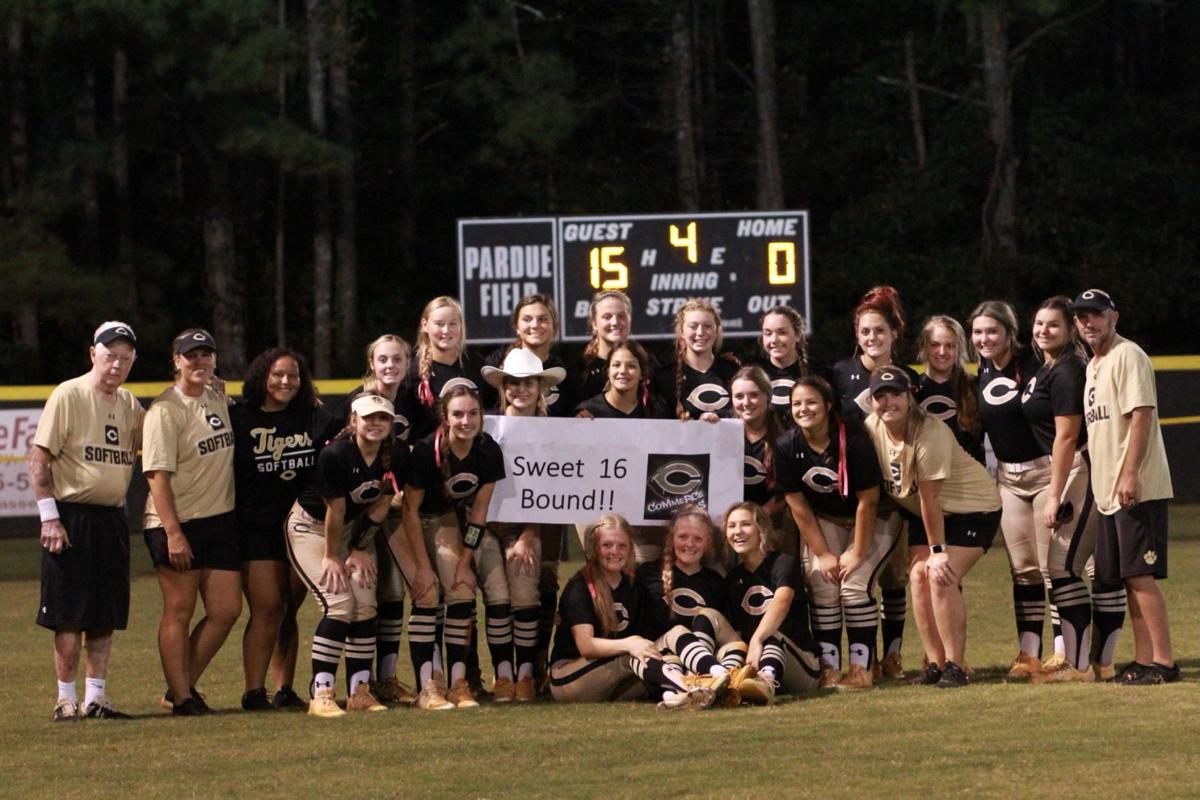 The Commerce softball team poses with the 2021 Sweet 16 banner.

The Commerce softball team celebrate its victories over Armuchee on Wednesday (Oct. 13).

The Commerce softball team poses with the 2021 Sweet 16 banner.

COMMERCE – The Commerce softball team is back in the Sweet 16 for the fifth-straight year following a first-round sweep of Armuchee from Region 6-A Public.

The Tigers took care of business against the Indians not allowing a run across both games. Carson Hobbs pitched a five-inning shutout to lead Commerce to an 8-0 win in game one. Lexi Darnell and Graci West combined for a four-inning no-hit shutout in game two. The Tigers won that game 16-0.

“I was super proud of them,” said head coach Melissa Mullis. “I think they came out and stayed enthusiastic. They hit the ball well and they understand that it’s not going to be like this again. They hit well, but this is our field, the girls are used to it.

“We told them to celebrate tonight and then tomorrow they better step it up… It was definitely a fun day.”

Commerce (19-6, 9-2 Region 8-A Public) travels to Lanier County (21-5, 13-1 Region 2-A Public) next week for the second round of the A Public State Playoffs. Commerce traveled to Lanier County in the Elite Eight last season. Commerce won that series in three games after losing the first game. Mullis hopes for a better start this year

“We did everything we could,” Mullis said. “We stopped, we feed them well, we took our time. We got there, got off the bus, and were flat, just really flat. We had not traveled that far at all in a season.

“We’re definitely considering that right now as we’re making some decisions on whether we’re going to leave the night before or if we’re going to do the same things. It is a danger to travel that far and it’s hard to recover your body to be enthusiastic for two games. But we’re excited because it’s not the first time that we’ve been down there.”

Mullis went on to say it’s reassuring that Commerce is playing a team it is familiar with.

Carson Hobbs allowed just three hits and struck out seven batters to totally shut down Armuchee’s offense in game one. Commerce provided plenty of run support throughout the game and was able to win after five-and-a-half innings of play.

The Tigers’ didn’t start incredibly fast on offense. Kylee Taylor hit a one-out double in the bottom of the first inning, but she didn’t move to third until Hobbs hit a two-out single to third base. Paige Vickery followed with a line drive to left field. Taylor scored on the hit to give Commerce a 1-0 lead.

Commerce took full control of the game with a three-run second inning. Hailey Harpis drove in Kendall Peters with a one-out single into left field. Taylor gave the Tigers a 4-0 lead by hitting a home run to right field.

Graci West hit the Tigers’ second homer of the day to lead off the bottom of the third inning. Commerce led 5-0 after the bomb.

Armuchee (9-17-1, 5-5 Region 6-A Public) had moments where it threatened to score a bevy of runs against the Tigers. In the top of the fourth inning, two errors and a single loaded the bases with no outs. The Tiger defense banded together to prevent a rally. Grace Hobbs picked off a runner at third base for the first out. Carson Hobbs struck out the next batter and West fielded a ground ball at third base for the last two outs.

The Indians had two base runners in the top of the fifth inning with only one out, but Carson Hobbs struck out the next two batters to squash another rally attempt.

The Tiger offense was much more explosive in game two. Grace Hobbs and Paige Vickery hit a single and double respectively with two outs to drive home Kylee Taylor and Amelia Holloway. Commerce led 2-0. Graci West hit a ground ball which turned into two errors. Vickery was able to score from second base, extending the Tigers’ lead to 3-0 in the top of the first inning.

Anna Taylor scored Commerce’s only run of the second inning when she ran home on Carson Hobbs’s double into centerfield. The Tigers were in full control with a 4-0 lead.

Vickery and West opened the third inning with solo home runs to centerfield, further extending Commerce’s lead to 6-0. Later in the inning, with Hailey Harpis on first base and Mazie Fields on second base, Anna Taylor hit a line drive to left field which brought in one run. Kylee Taylor followed with an RBI infield single and Carson Hobbs cleared the bases with a hard ground ball to left field. Commerce ended the third inning leading 10-0.

Peters’s leadoff single in the top of the fourth inning set up a two-run homer for Hailey Harpis, putting the Tigers in mercy-rule territory up 12-0. Anna Taylor and Kylee Taylor reached scoring positions by hitting a single and double respectively. Both scored when Grace Hobbs hit a double to deep right field. Vickery put an exclamation point on the night with a two-run homer to right field. Commerce led 16-0.