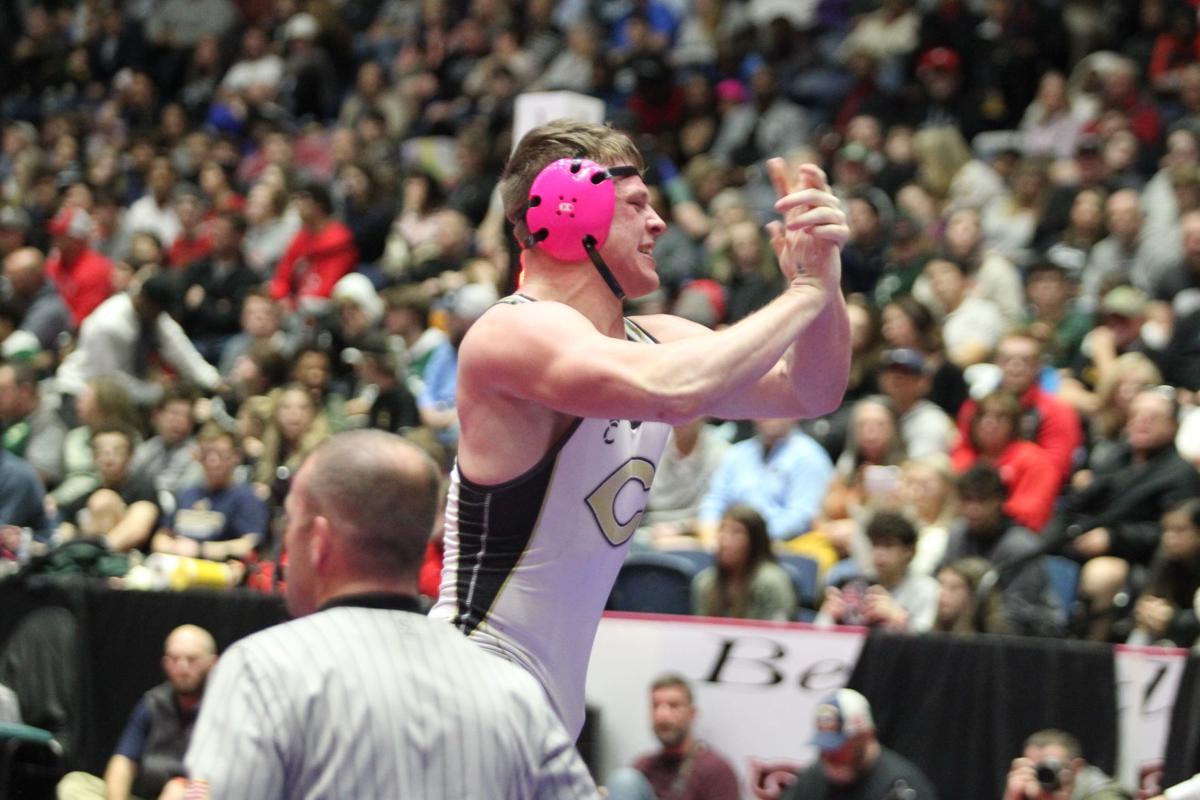 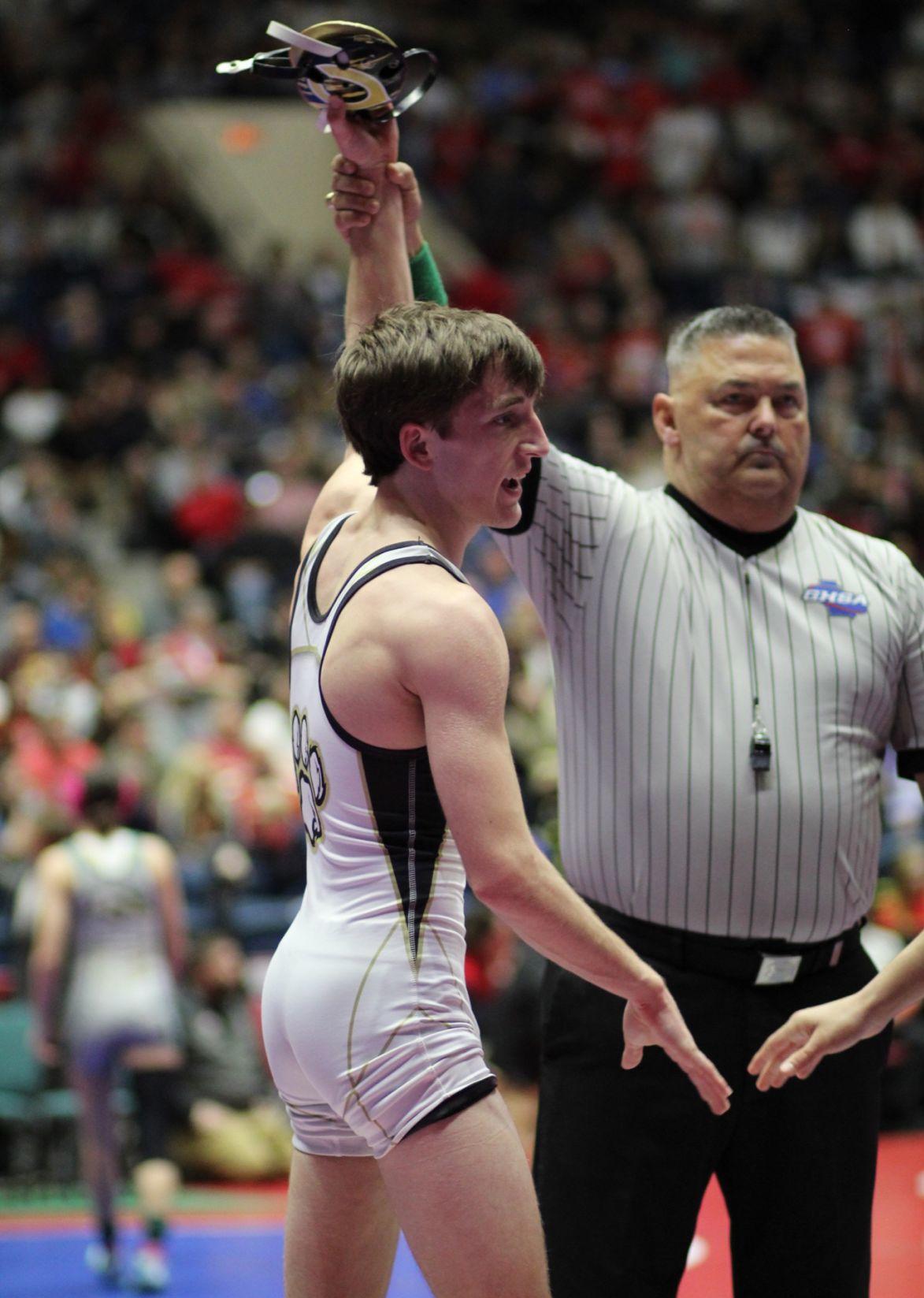 Commerce's Dawson Legg's arm is raised in victory after his state-title win in the Class A 113-pound division Saturday (Feb. 15) in Macon. Commerce rallied during the finals round of the state tournament to win its seventh-consecutive traditional state championship, edging Trion 159-157.5 for the Class A title.

Commerce's Dawson Legg's arm is raised in victory after his state-title win in the Class A 113-pound division Saturday (Feb. 15) in Macon. Commerce rallied during the finals round of the state tournament to win its seventh-consecutive traditional state championship, edging Trion 159-157.5 for the Class A title.

On Saturday in the Macon Coliseum, Commerce entered the day trailing Trion for the traditional state title. The Tigers needed things to go perfect to claim their seventh straight traditional team title. Well, seven turned out to be a lucky number for Commerce.

The Tigers – behind individual state titles from Dawson Legg (113), Jake Frates (182) and Elijah Burns (195) – put together the comeback to catch and pass Trion to win their seventh straight state title. Commerce scored 159 points, edging Trion by 1.5 points (157.5). All three champions went 4-0 in the tournament.

Commerce clinched the championship when Burns got a pin over Telfair County’s Cameo Blankenship in the second round of the 195-pound finals. The win was Burns’ second straight individual state title, too.

“I was pretty excited at the end of my match,” Burns said. After winning, Burns jumped into the arms of one of the Commerce assistant coaches, roaring with jubilation.

“It helped not only me, but it helped with team points, too,” he said. “It helped (get us) higher in the team rankings. I got excited about that, too … Knowing that I helped both of us, knowing that my coach was there to help celebrate, it was a good feeling.”

Jake Frates called it a “big” moment for him to help contribute to winning the overall title, as well as getting an individual title. He finished runner-up in Macon last year. But he wanted to put the spotlight on his teammates who grinded out wins from the consolation to the championship rounds.

“The bigger thing was we had some guys pull through in the final rounds and the wrestlebacks to put us up by one and a half points in the team race, which is really something we wanted to achieve after losing the duals title,” he said.

“We talk about it all the time, we have great leadership. Power is made perfect in weakness. I was just reading that in (2) Corinthians and it holds true. We had to fall and it united us. So, now we’re back.”

After winning his state title over Erik Dodder of Mount Vernon via a major decision (18-5), Jake got a big hug from his brother, Josh Frates – who finished third in the 220-pound division earlier in the day.

“It was my brother’s last go round. This is my last time competing with my brother,” Jake said. “That’s my best friend. It was definitely a big thing for us.”

Legg got his pin with five seconds left in the first round. He defeated Art Martinez of Holy Innocents. Legg got early control in the match and didn’t let up until he got the pin.

“It felt great. I didn’t expect that, honestly,” Legg said. “Once I got the first takedown, I knew I was going to end the match pretty quick.”

“Everybody on the team contributed, not just the people in the finals,” he said. “Everybody. People in the consos, everybody … After duals state, everybody’s heads were down. But coach (Kendall Love) got us back up and told us we were going to win traditionals, and sure enough we did.”

Head coach Kendall Love said the team “wrestled really well” Friday to put itself in position to possibly win, if it wrestled the same way Saturday. In the end, the team wrestled even better.

“We came in with nine kids, Trion had 12, so we were behind the eight ball as far as numbers go,” Love said. “But I’m going to tell you, our guys wrestled on fire all day today. I think we beat four kids throughout the day that had already beaten us.

“It came down to the finals. We had to win all three of them and have two pins in the finals. We got two pins and a major. I’m more proud of this group of young men than any other group I’ve coached. They showed heart. They came out ready to wrestle. They did everything we asked them to do. They were just flat-out Warriors today, and I couldn’t be more prouder.”

What made No. 7 so special was overcoming the “major obstacles” this season through the Tigers’ way, Love added.

“Our kids just stuck together,” he said. “It makes it sweet because of that. I mean, nobody gave us a chance coming in here, because we only had nine guys. Our kids just had the mindset that, ‘We’re Commerce. We’re going to come to compete. We’re going to go out swinging.’ It worked out for us.”

The team was docked a point after Burns’ celebration and the embrace with his coaches. Love said “sometimes, it’s worth it.”

“We had to have that pin,” he said. “Elijah came through for us and got the pin. It was just a special day, a special moment that I know these kids will never forget.”

Nash got a forfeit win for third. Flint defeated Trion’s Bryce James via pinfall in the second round. Phillips got an overtime win over Jon Grier from North Cobb Christian. Josh Frates got a 5-2 decision over Michael Cox from Holy Innocents.

Ethan Epps (285) also placed for Commerce. He finished sixth in his weight class. Epps went 3-3 for the tournament.

Mkaila McCormick (142) was the lone Commerce girl to make it to Macon. She went 0-3 in the tournament.

Commerce's Dawson Legg's arm is raised in victory after his state-title win in the Class A 113-pound division Saturday (Feb. 15) in Macon. Com…