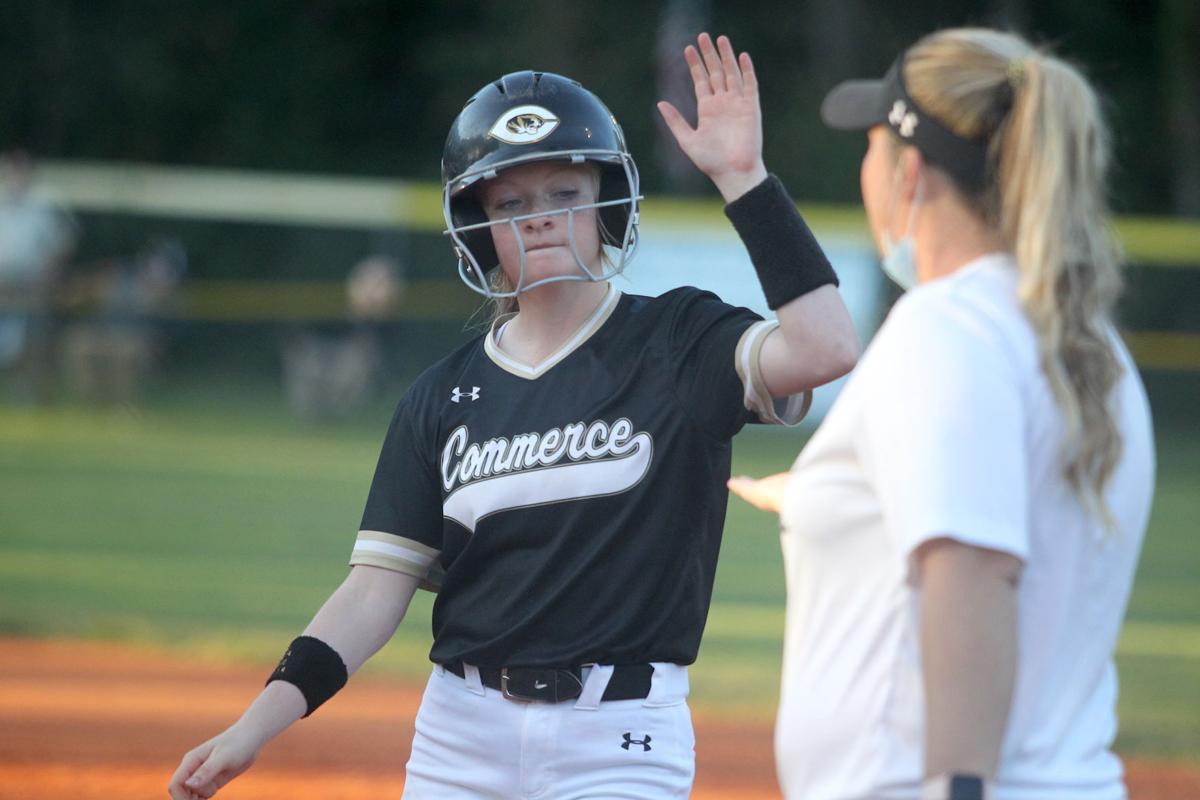 Commerce's Kylee Taylor is congratulated after a base hit during the Tigers' 6-5 win over Social Circle Friday (Oct. 2). The win secured Commerce's fourth-straight region title. 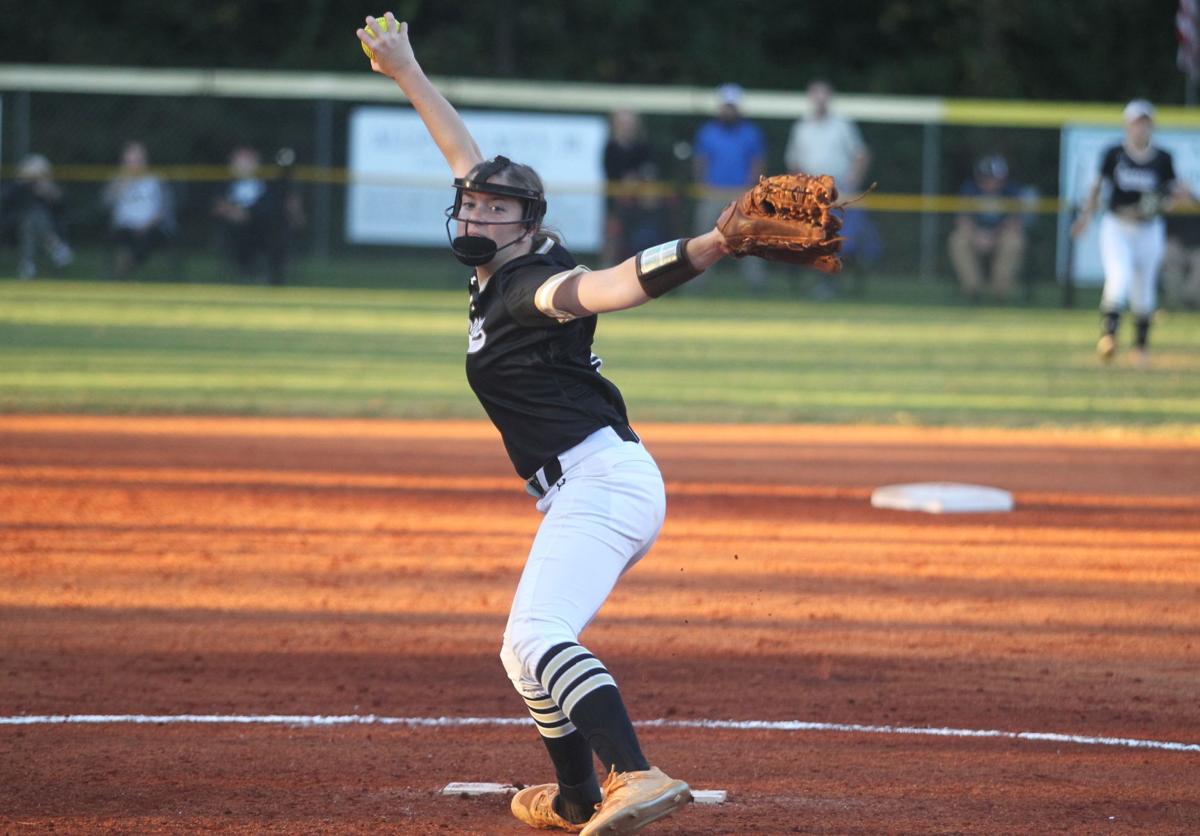 Commerce's Kylee Taylor is congratulated after a base hit during the Tigers' 6-5 win over Social Circle Friday (Oct. 2). The win secured Commerce's fourth-straight region title.

New region, same result — though it took a little extra.

The Tiger seniors have now won a region title in each year of their high school careers.

“That’s something that I never thought Commerce could do,” senior pitcher Rachel Morgan said. “Whenever I was in middle school, I used to come and watch the games, and I wanted to be out there with them, and now that we’re out here, and we’re winning region every year, it’s really fun.”

"They want to win badly, and they will humble themselves and do whatever it takes to help the team win,” she said. “I am so happy for this group because they really aren't taking it for granted. They are treasuring each minute."

It made for a long, but rewarding week of softball for the fourth-ranked Tigers.

“To me, I was very tired after both of those games,” senior short stop Gabbie Deaton said. “They were long. It was hard. They were tiring but the team, we kept our intensity up, and we knew that we had it.”

Winning both those games in similar fashion also provided a confidence boost, according to Morgan. Commerce trailed in both contests.

“I think in those extra innings, we had to pull together,” Morgan said. “We really had to show that we were a team, and we let all things aside and played as one.”

The Tigers’ fourth-consecutive region title comes as members of Region 8-A Public after three straight titles in the old Region 8-A, which combined both public schools and private schools. The GHSA has now divided Class A into public and private regions exclusively.

Morgan thought that the Tigers’ new surroundings this year perhaps eased the pressure on winning another title.

“I felt like since we switched regions, I felt like it was different,” Morgan said. “Because we’ve never seen these teams play before. So I feel like we weren’t expected to be like, ‘Oh, we’re going to win region this year.’ We had to work for it, and I’m glad we did.”

Deaton said four straight region banners “shows who we are.”

Anna Taylor provided the game-winner against Social Circle with a two-out bunt single in the bottom of the eighth inning that scored Morgan. The Tigers trailed 5-0 in the third inning.

"I had no doubt that Anna could beat out an infield bunt or hit," Mullis said. "I felt that a bunt, well executed, would not be expected because we had two outs, and they would struggle to handle the pressure it would bring.

"The third base man was playing back. Anna read the defense perfectly and put down the most beautiful bunt she could have ever bunted. She did a wonderful job of helping the team offensively throughout the whole game."

In the victory, Morgan overcame a tough third inning in the circle — during which Social Circle scored all five of its runs — to record shutout innings over the final five frames. She allowed five hits and three earned runs over eight innings with five walks. Morgan struck out three batters.

"Rachel has done a great job of being a competitor this season," Mullis said. "As we face good hitting teams, we understand that we may give up hits, but we can't afford to give up walks. She did a great job of responding to adversity with mental toughness. She gave us a chance to win because she kept battling and believing in herself and her team. I couldn't ask for more."

At the plate, Carson Hobbs went 2-for-4 and tied the game 5-5 with an RBI single to centerfield in the bottom of the seventh to force extra innings. Deaton also went 2-for-4.

Paige Vickery went 1-for-3, hitting a home run in the bottom of the fourth inning to start the Tigers’ rally.

Commerce returned to action this Tuesday (Oct. 6) with a 9-1 home win against region opponent Towns County.

Commerce scored three runs in the first inning and two in each inning after to end the game in five innings. The Tigers finished with nine hits, including two-run home runs from both Morgan and Graci West. West finished with three RBIs. Emma Davis went 2-for-2 with two RBIs, while Carson Hobbs was 2-for-2 with a double.

Lexi Darnell and West split the pitching duties with Darnell throwing the first two innings allowing a hit and a run and striking out five batters, while West pitched the last three innings, allowing one hit and strikeout out six batters.

"It has been an ever-changing but fun season. We are so grateful to be able to play our season, and I hope we will continue to fight all of the way to the finals," Mullis said.

Commerce will enter the state tournament, which begins Oct. 19, as a No. 1 seed by virtue of its region title.

“I know that we’re going to play very good teams, like Gordon-Lee,” Deaton said. “We know what’s coming for us, and we know that we have to keep fighting.”

The Tigers finished third last year in Class A-Public. Becoming a championship team is largely a matter of trusting one another, on and off the field, Morgan said.

“We just have to trust each other a little bit more, and I think we’ve got it,” she said.