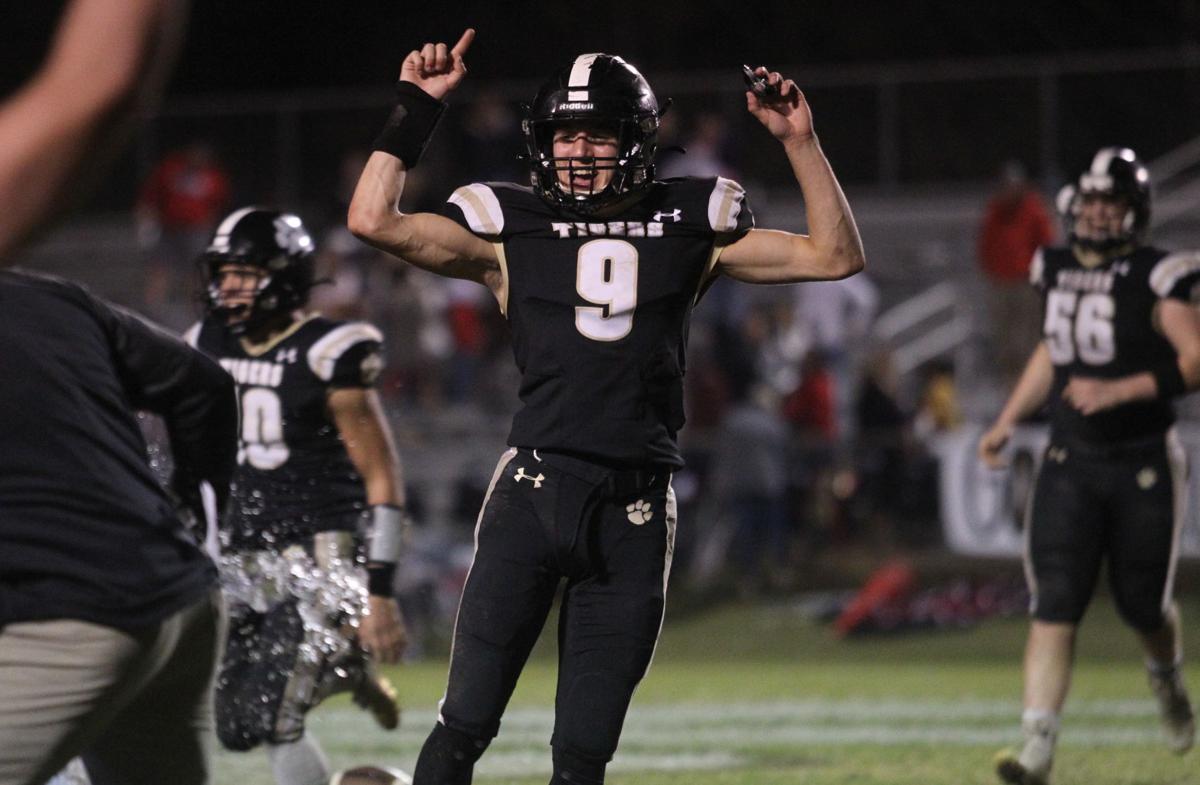 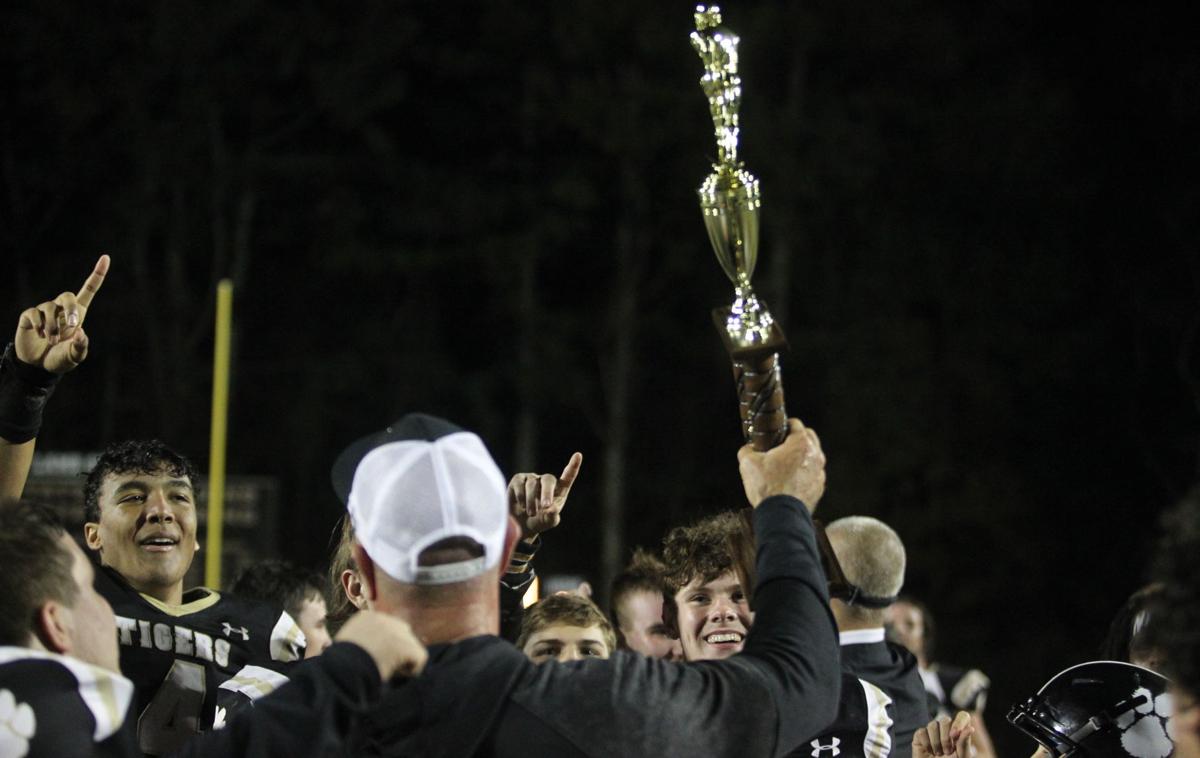 Commerce coach Michael Brown hoists up the Region 8-A Public trophy to present to his team Friday (Nov. 20) after its 17-7 win over Lincoln County.

Commerce coach Michael Brown hoists up the Region 8-A Public trophy to present to his team Friday (Nov. 20) after its 17-7 win over Lincoln County.

Commerce coach Michael Brown said a grinding, four-quarter game "was kind of what I expected."

“Lincoln County is always good on defense," he said. "I think we had just enough offense tonight to win. Ultimately, I think we made one or two less mistakes than they did. That was the difference in the game. It was just a tight ballgame and an even ballgame for all purposes.”

The Tiger defense has allowed just one touchdown over the last six quarters.

“I thought defensively, we played hard,” Brown said. “We got kids to the ball. We tackled well, and we didn’t give up the big play. All-in-all a pretty good night defensively.”

With the scored tied 7-7 in the fourth quarter and Commerce facing a fourth-and-two, Martin — in one of the biggest runs of the year — took a handoff and plowed forward for a first down and then wrestled free from the scrum and raced 42 yards for a touchdown.

The Tigers later picked up a fumble on the Lincoln County 16, which led to a 28-yard field goal from Eryck Diaz and a 10-point lead with 3:07 left.

The game ended with the Red Devils (6-3, 3-2 Region 8-A Public) failing to convert a fourth-and-five with 1:49 left. Commerce went into victory formation and drained out the final seconds to cap off its first region title since a 5-0 run through the old Region 8-A in 2003.

“There’s nothing like it,” Tiger senior defensive back Creed Dunbar said of the title. “Everybody on the team is really excited and really ready to move on to the playoffs.”

Gaven Dawley then intercepted a deep pass on Lincoln County’s next possession and returned the ball to midfield. Four plays later, Martin broke off his long run to put the Tigers out front for good.

Commerce scored the last 17 points of the game, a run that began with a penalty-aided second-quarter touchdown drive.

Down 7-0 and facing a fourth-and-five inside the Lincoln County 30, the Tigers dialed up a pass. Though quarterback Trey Huff was unable to connect with Shawn Cunningham in the end zone, the Red Devils were flagged for pass interference. Sammy Brown scored four plays later on a toss sweep, tying the game 7-7 with 1:42 left in the second quarter.

“That was a big play,” Brown said of getting the pass interference call. “We were just able to capitalize on a few mistakes that those guys made, but hats off to Lincoln. They played their tails off. And they came here to win a region championship. They came after us in the first quarter. Once we kind of settled down, it was a tough, hard-fought game.”

The victory over Lincoln County came after a draining 28-17 win over Washington-Wilkes on the road last week.

“Playing both of those teams is going to help us go further in the playoffs,” Dunbar said.

The win also came amid a tough week for the Tigers.

“We’ve had a lot of adversity this week,” Brown said. “We’ve had some issues with COVID. It’s been an emotional rollercoaster for our kids and for our coaches. And for us to handle the adversity the way we did, and come out here tonight and find a way to win, it just says a lot about the character of these kids.”

With the win, Commerce’s senior class improves to 35-10 with a region title to boot.

“They deserved it,” Brown said. “They’ve worked hard. This is a good group of seniors, and they’ve just shown tremendous leadership the last couple of weeks. We’re going to enjoy this for 48 hours, and then we move on to the playoffs.”

The No. 1-seeded Tigers are set to host an opponent from Region 5-A Public next week at home in the first round of the state playoffs. Marion County is the No. 4 seed from that region but has opted out of the playoffs due to COVID issues. Manchester, the fifth-place team in that region, will be the Tigers' first-round opponent instead.

With a region trophy now in their hands, the Commerce players hope this is just the beginning.

“We’re going to make a far run, hopefully all the way,” Dunbar said.

For the second straight week, Commerce shut out its opponent in the second half. Gray Holbrook led the Tigers with nine tackles. Commerce's defense played without starting senior defensive lineman Chauncey Jackson. "I thought that Ethan Epps came in there and played well for us," Brown said. "It was just a good night, a good win." ... This is Commerce's 18th region title overall ... This win marked the Tigers' first victory over Lincoln County since 2002, breaking a streak of nine-straight losses ... The Tigers will be making their 24th straight state playoff appearance, one of the longest streaks in the state ... This is the sixth time in the last seven seasons Commerce has won nine or more games.