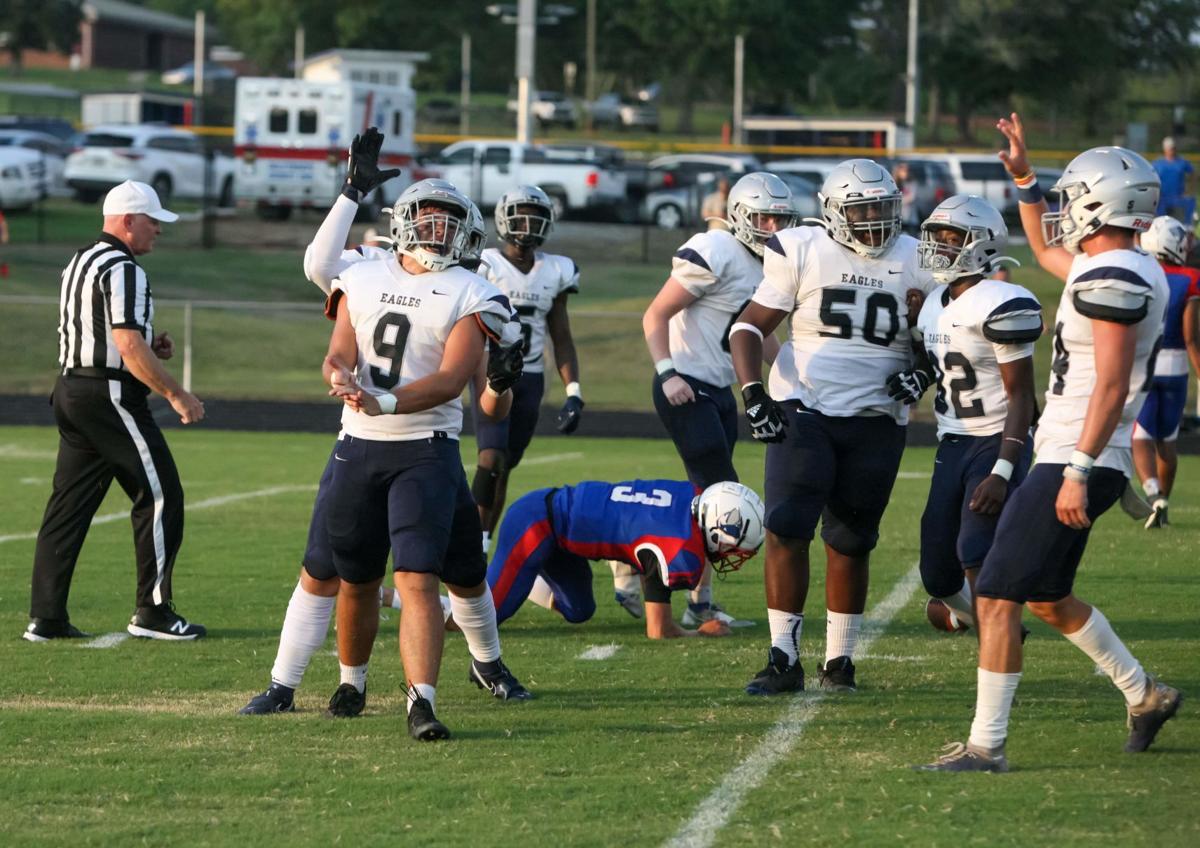 Jeremiah Stansell is met by teammates after making a tackle for a loss in East Jackson's scrimmage game. 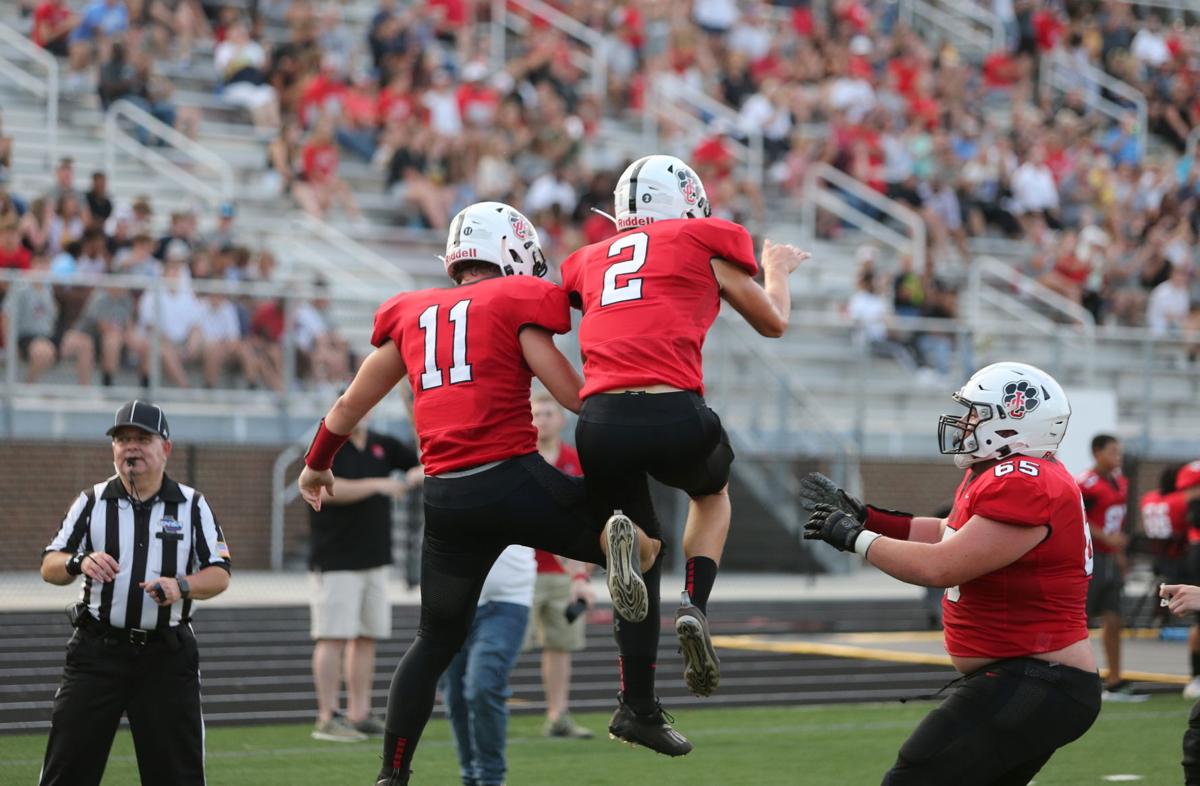 Jeremiah Stansell is met by teammates after making a tackle for a loss in East Jackson's scrimmage game.

Jackson County is holding the grand opening of its new football stadium this Friday, but cross-county rival East Jackson has a chance to spoil the Panthers' big night.

Jackson County, who moved into its new campus in Hoschton over the summer, is playing its first regular season game at its new stadium. The Panthers hosted Cherokee Bluff in a scrimmage on August 13, but Jackson County head coach Rich McWhorter referred to the rivalry matchup as the "grand opening" because of the crowd East Jackson will surely bring.

"I think it's a great way to start the year. They know us really well, we know them really well, we share the same central office. It's been a good rivalry in all sports"

East Jackson coach Cameron Pettus said the Eagles are just focused on the game itself and preparing despite Friday being a big deal for their rivals.

"We're just focusing on ourselves, that's the most important thing," Pettus said. "You can't worry about your opponent, you can't get caught up in all of that stuff. All you can worry about is yourself; who we are every day to get better... Little things add to big things. If you have a good week of preparation, you'll usually have a good showing on game day.

East Jackson lost to West Hall 14-7 in its season opener, but if you ask him, he believes the Eagles could have won by a two touchdowns had a a few things happened differently. He's not underestimating East Jackson, in fact, he expressed concerns over how to defend East Jackson's ball-control, time-consuming offense.

"Coach Pettus has done a great job bringing that program along over the last three years," he said. "They're a very physical football team. Big up front and they can knock you off the ball. That's what they do. I think their first possession Friday, they burned nearly half the first quarter up.

"That's always concerning, whenever you play anyone like that, that they're going to get the ball you just won't see it for a while. They're able to control it, be physical and wear you down. That's a big concern of ours."

McWhorter also praised the Eagles defense which he described at being sound at all three levels. East Jackson is led by a pair of linebackers Ethan Ardis and Jeremiah Stansell who play the field very well. Both were instrumental in the Eagles holding the Spartans offense to just 14 points. In conjuncture with the Tyler Crow and Gary Maddox led offense eating the clock, East Jackson can put opposing offenses in desperate situations that the Eagle defense is capable of capitalizing on.

East jackson also has continuity on its side. The Eagles didn't have a bye week to start the year so they've played the last two weeks. Jackson County hasn't played in a football game since its scrimmage on August 13.

Here's what Pettus said about his team after two outings:

"Our defense played well the last two games obviously," Pettus said. "I've been very excited about what our defense has been able to do.

"Offensively we've gotten better, we've got to take care of some mistakes, don't shoot ourselves in the foot and execute better. I think we made strides on offense the past week as well. I feel like there's a lot of room for improvement from last week to this week, and I think that benefits us. This is our third game going in and playing Jackson County."

That's not to say Jackson County will lack confidence going into the game. On the contrary, the Panthers are coming off a very impressive showing in its scrimmage against defending Region 7-AAA Champions Cherokee Bluff. Though the score wasn't being kept on the board, the Jackson County varsity did have more scoring plays than the Bears.

"We were pleased to see some carry over from the things we did over the summer in our 7-on-7s and padded camps," McWhorter said. "We were really excited to see some good things happen in that game. I think it helped our confidence some, I think there's no reason for us not to be confident in that we can do some good things on both sides of the football.

"We were able to come up with some big plays and that's something we lacked over the last couple of years. We were able to make plays in all three phases of the game."

The Panthers center the offensive game plan around running back Tre Ransom, who rushed for 1,131 yards in 2020 despite not playing a full season because of injuries. He shares the rushing load with M.J. Spurlin and Hyson Porter. Jackson County will likely look to put pressure on East Jackson's defense through the arms of quarterbacks Isaiah Maxey and Connor Bejin. Both had touchdown passes against Cherokee Bluff.

On defense, Jackson County needs a big game from its front seven to prevent East Jackson from picking up first downs to prolong possessions. Peyton Scott is the leader of the defensive line while the linebacker corps features the trifecta of JT Sosbee, Bailey Hamm and Daniel Stites.

•What else: East Jackson and Jackson County didn't play last year because of COVID-19. That was the first time the cross-county rivals hadn't met since the rivalry became an annual affair in 2010... The Eagles are looking for their first win in the rivalry since 2016. The Panthers defeated the Eagles 17-0 in McWhorter and Pettus's first year at their respective programs. Jackson County has won seven of the last eight games against East Jackson. That streak came after the Eagles won the first two meetings in 2010 and 2011.