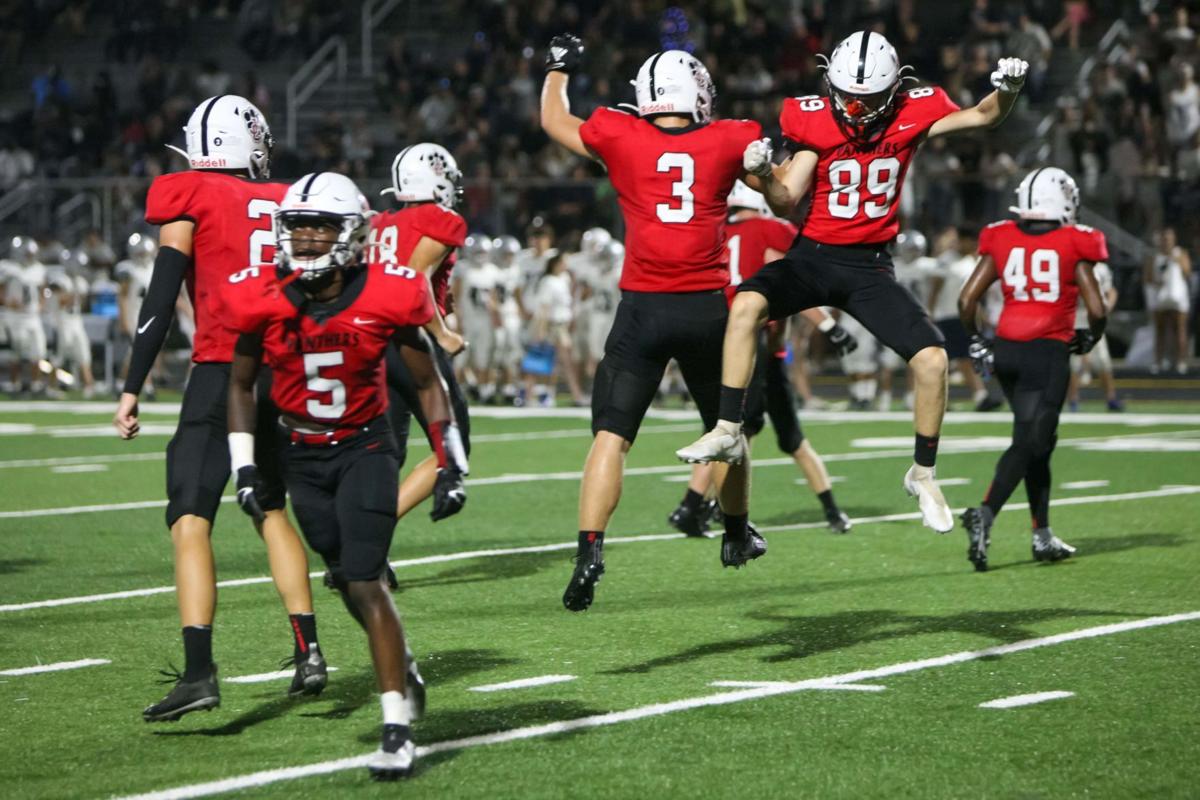 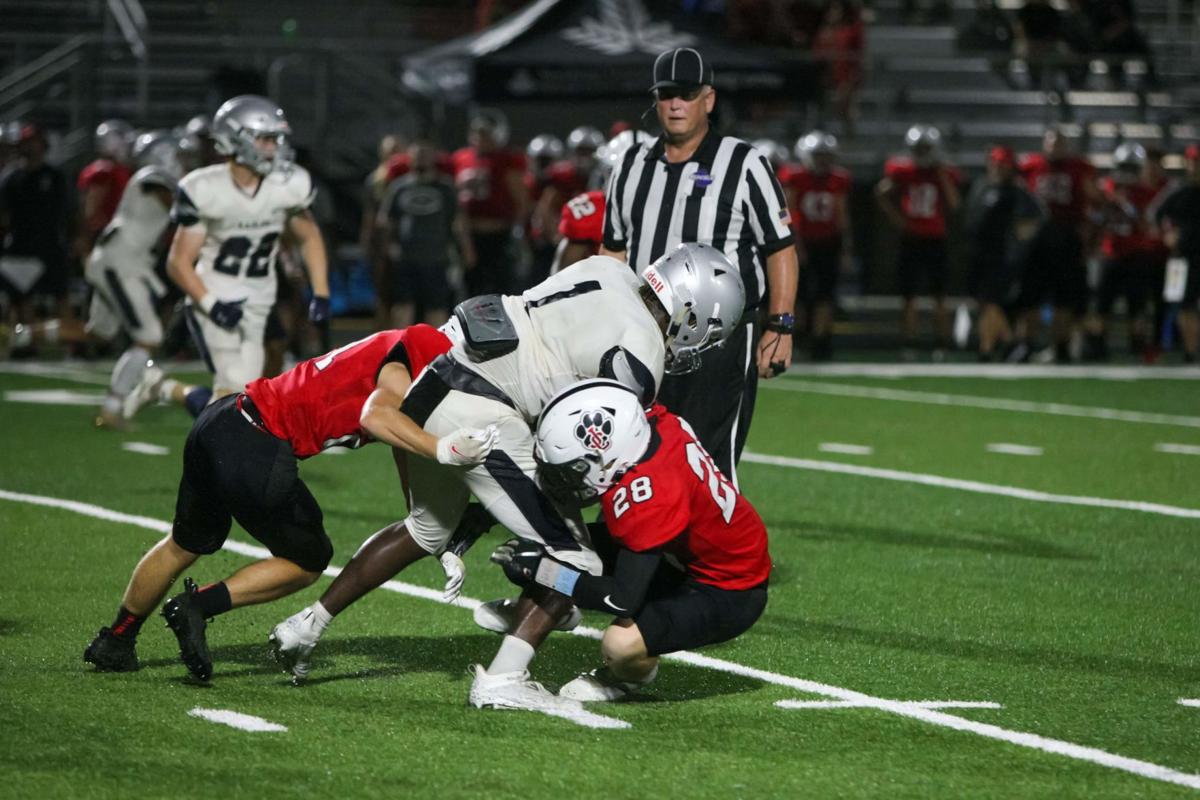 Quay Hill lowers his shoulders to pick up extra yardage against Jackson County.

Quay Hill lowers his shoulders to pick up extra yardage against Jackson County.

HOSCHTON – Jackson County’s first game in its new stadium got off to a bit of a rocky start with drive-stopping penalties and a lightning delay. But once the Panthers got rolling, East Jackson didn’t have an answer.

Jackson County defeated the Eagles 26-0 with 240 offensive yards from one-two-punch Tre Ransom and MJ Spurlin. The duo accounted for three of the Panthers’ four touchdowns. The quarterback duo was efficient as well, throwing for 127 yards on 12-of-17 passing.

However, the Panther offense didn’t hit its stride until the middle of the second half. They scored just one touchdown in the first 31 minutes, a powerful seven-yard run by Ransom. Jackson County’s offense racked up 159 yards in the first half, but 45 penalty yards, a missed field goal and timely stops on late downs by the Eagle defense held it to just seven points.

“East Jackson is a tough football team,” said Panther head coach Rich McWhorter. “An extremely well-coached football team. It was a tough game, but we’re going to have a lot of those throughout the year. We have a lot of improvement to do, a lot of work to do in a lot of different phases of the game.

“Coach Pettus is as good of a coach as there is. His kids were prepared to play hard, play physically. They got after us. They’ve got a lot to be proud of and a lot to look forward to this season. We do too.”

East Jackson (0-2, 0-0 Region 8-AAA) had its own penalty issues which kept it from keeping up with the Panthers. The Eagles were penalized 13 times for 119 yards. Both of their longest plays of the first half, a 70-yard touchdown by Quay Hill and a deep pass by Tyler Crow, were negated by holding calls.

One of East Jackson’s most promising possessions of the first half was interrupted by a 30-minute lightning delay. Following a stop on fourth down at its own 34-yard-line, East Jackson marched across midfield and reached the Panthers’ 48-yard-line when lightning struck. The drive fizzled out once play resumed.

Jackson County (1-0, 0-0 Region 8-AAAAA) finally hit its stride midway through the second half. Following an East Jackson punt, the Panthers took over at their own 23-yard-line. Ransom ran for 28 yards on the first play and that ended up being the last carry of the game for him.

Spurlin took over, busting out runs of 20 and 15 yards before powering his way into the end zone for a three-yard touchdown. Jackson County led 13-0 following a missed point-after-attempt with 4:41 left in the third quarter.

The night turned firmly in the Panthers’ favor on the ensuing kickoff. Great coverage put the Eagles at their own 12-yard-line. East Jackson committed a penalty on its first snap and ground its way back to the 15-yard-line where it lined up for a punt. However, the Eagles wouldn’t get a punt off and Jackson County took over at the 10-yard-line.

The Panthers scored a few plays later with another powerful run by Spurlin. Jackson County went for two points, but failed, keeping the score at 19-0 with 2:08 left in the third quarter.

East Jackson responded with its best possession of the game driving from its own 16-yard-line to the Panthers’ nine-yard-line on the legs of Hill, Crow and Gary Maddox. However, a fumble on a toss killed the drive. Jackson County recovered at its own 15-yard-line.

After both squads traded failed fourth-down conversion, Maxey came out throwing from the Eagles’ 43-yard-line. He hit Markel Oliver on the first play for 35 yards and snuck into the end zone a few plays later to extend Jackson County’s lead to 26-0 with 3:55 left in the game.

The Panther missed one more field goal before the end of the game to keep the final score at 26-0.

PANTHERS HAVE DEPTH AT RUNNING BACK

Depth is a necessity in Class AAAAA with schools with enrollment well over 1,500 students. MJ Spurlin’s breakout performance shows that Jackson County has solid depth at running back. The Panthers don’t have to rely on just Tre Ransom anymore.

“Tre is a three-way guy,” McWhorter said. “He starts on defense, big in the return game for us. And we knew a big key to our offense was going to be MJ having to step up. MJ can and MJ showed he can. We’re excited about both of those guys sharing the load at running back.”

Tre Ranson had 115 yards on 16 carries Friday night, he added four catches for 33 yards. Spurlin had nine carries for a whopping 92 yards with a pair of scores.

“Before I talk about myself, I want to talk about my teammates,” Spurlin said. “We’re noting without the offensive line. They really played well today, they made their blocks which allowed me to do my job. It was an overall good game for all of us.

“I came out there and did what I had to do. Last year, I was a freshman so I didn’t get a lot of snaps. I don’t like sitting on the sidelines, so I know when I get on the field I have to show what I can do.”

East Jackson left Hoschton with a zero in the scoring column, but it also left with reasons to be optimistic. The defense forced a pair of fourth down and numerous third-down stops. The offensive triple threat of Tyler Crow, Gary Maddox and Quay Hill combined for 192 total yards. Ultimately, self-inflicted mistakes kept East Jackson from keeping the game close.

“I am so proud of our football team and how we competed tonight and the direction of the program,” said head coach Cameron Pettus. “We will correct our mistakes and continue to get better.”

East Jackson plays another local rival next week when it hosts Banks County from Region 8-AA.

Jackson County goes on the road for the first time in 2021 to play Stephens County.