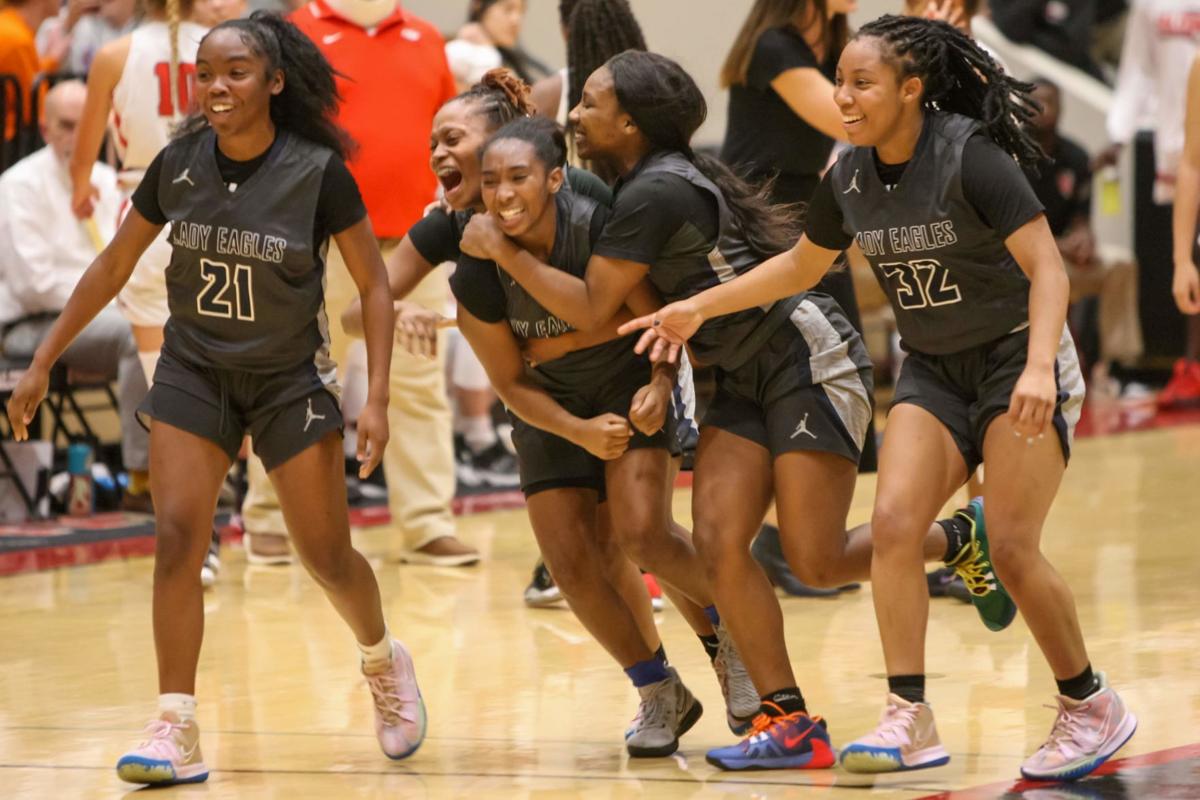 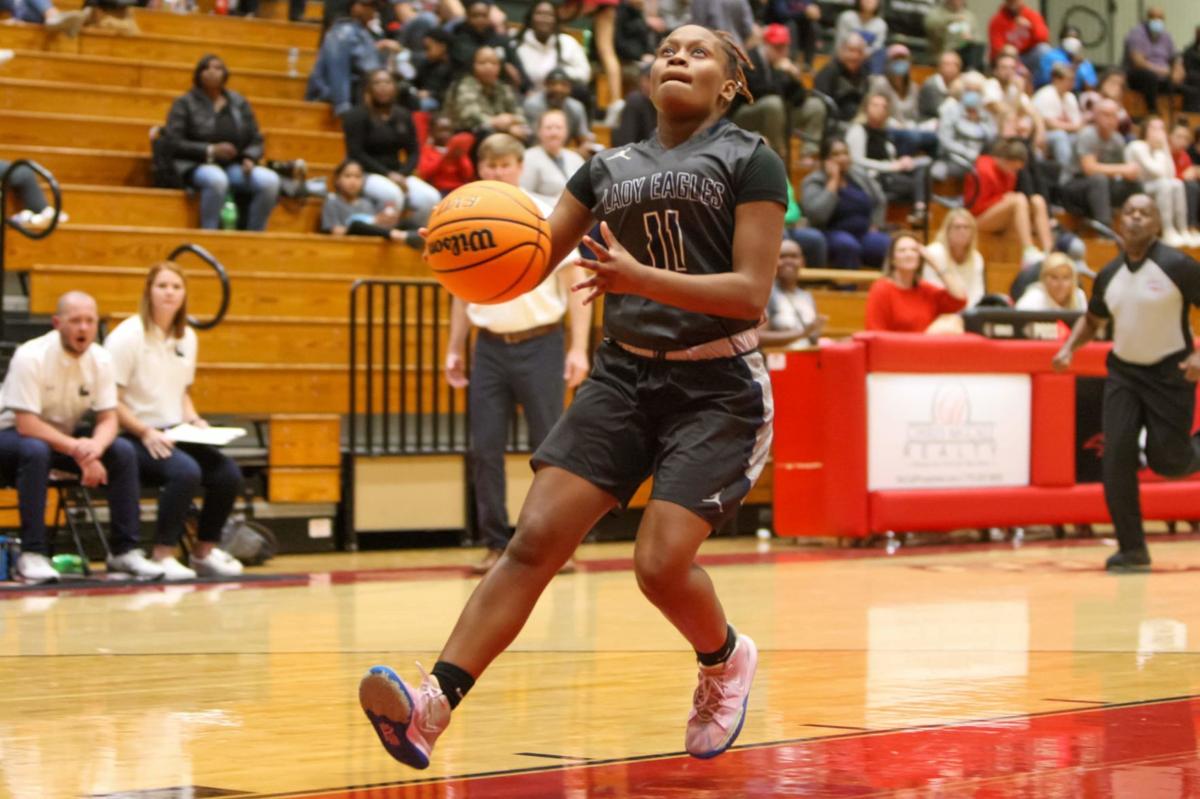 Yasmine Clark shoots what proved to be the game-winning layup Tuesday (Nov. 30) at Flowery Branch. 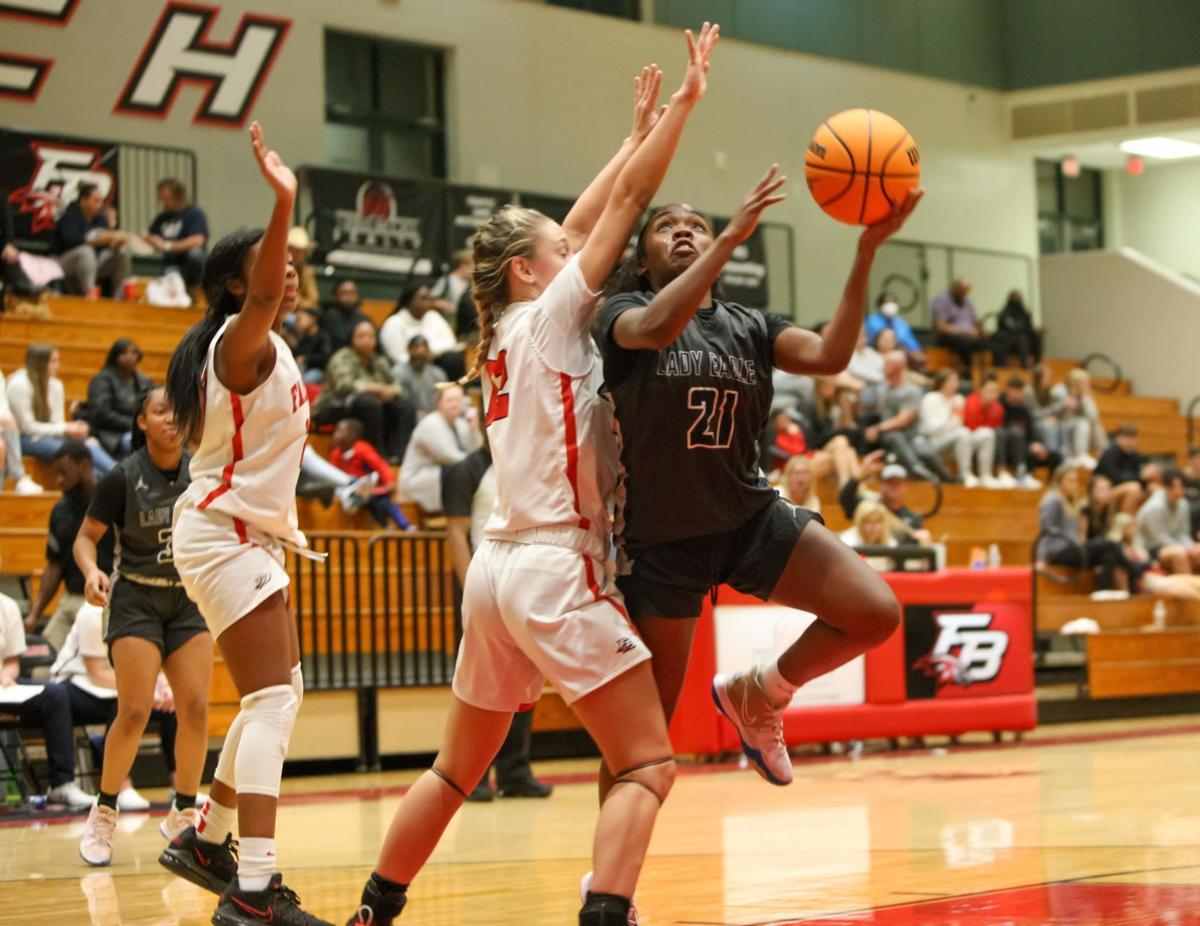 Yasmine Clark shoots what proved to be the game-winning layup Tuesday (Nov. 30) at Flowery Branch.

Yasmine Clark delivered the big play with a clean strip of the Falcons’ point guard. She rushed down court with no defenders around her and dropped in an easy layup to give the Eagles a 45-43 lead. A subsequent free throw by Antonia Pittman and a few stops on defense produced a 46-45 lead.

Flowery Branch had possession at the end of the game, but it was unable to get a shot off. Destiny Rakestraw, who spent minutes on the bench with an injury, stole the ball from a Flowery Branch ball handler as time expired to preserve the victory, the Eagles’ fifth in a row.

“That’s created off elite defense,” said head coach Matt Allen. “Yasmine is going to create a lot of offense for herself by continuing to work hard on the defensive end; staying in front of the ball and making plays on that end. I’m glad to see her get rewarded with a layup.”

Clark finished the game with just five points, but her last proved to be the biggest points of the night as East Jackson (5-1, 0-0 Region 8-AAA) wouldn’t relinquish the lead. Pittman led the team with 20 points, while usual sharpshooter Haven Rollins added nine points, including six in the fourth quarter.

“Antonia is a very talented scorer,” Allen said. “She can score in bunches, she can score at all three levels. She hit some big shots in the paint.”

East Jackson had to find new ways to achieve victory against Flowery Branch (3-3, 0-0 Region 8-AAAA). The Eagles, particularly Rollins, were scoring at will in their last two outings. Rollins had 48 points across both games, but the Falcons’ zone limited her to nine points. East Jackson only attempted 16 free throws, which is much less than what it had grown accustomed to.

“The pace of that play was certainly not what we wanted it to be,” Allen said. “It was a plotting style, they zoned us for the majority of the game. They had a good game plan, they played a very physical game. I thought our girls matched the intensity and matched the physicality of a much bigger Flowery Branch team.

“We did a good job taking care of the ball at the end of the game. What can you say about the stops we got over and over and over with a score of one possession either way in the fourth quarter. We got about 10 or 12 stops which were key against some girls who are good offensive players. I’m really proud of the team as a whole.”

The entire game was a back-and-forth, defensive affair. The Eagles trailed 8-7 after the first quarter, and entered halftime tied with the Falcons 20-20. Flowery Branch led 35-33 at the end of the third quarter, but East Jackson started the fourth quarter on a 10-0 run to claim a 43-35 lead, it’s largest of the game.

The Eagles were unable to put the game away with an eight-point and instead conceded a comeback which saw Flowery Branch tie the game 43-43 with less than two minutes on the clock. That’s when Clark made her heroic steal and fast break to put the Eagles ahead for good, ultimately winning 46-45.

East Jackson returns to action Friday (Dec. 3) at home against Madison County, another team from Region 8-AAAA. The Eagles have eight more non-region games before opening Region 8-AAA play against Oconee County on Jan. 7 at home.