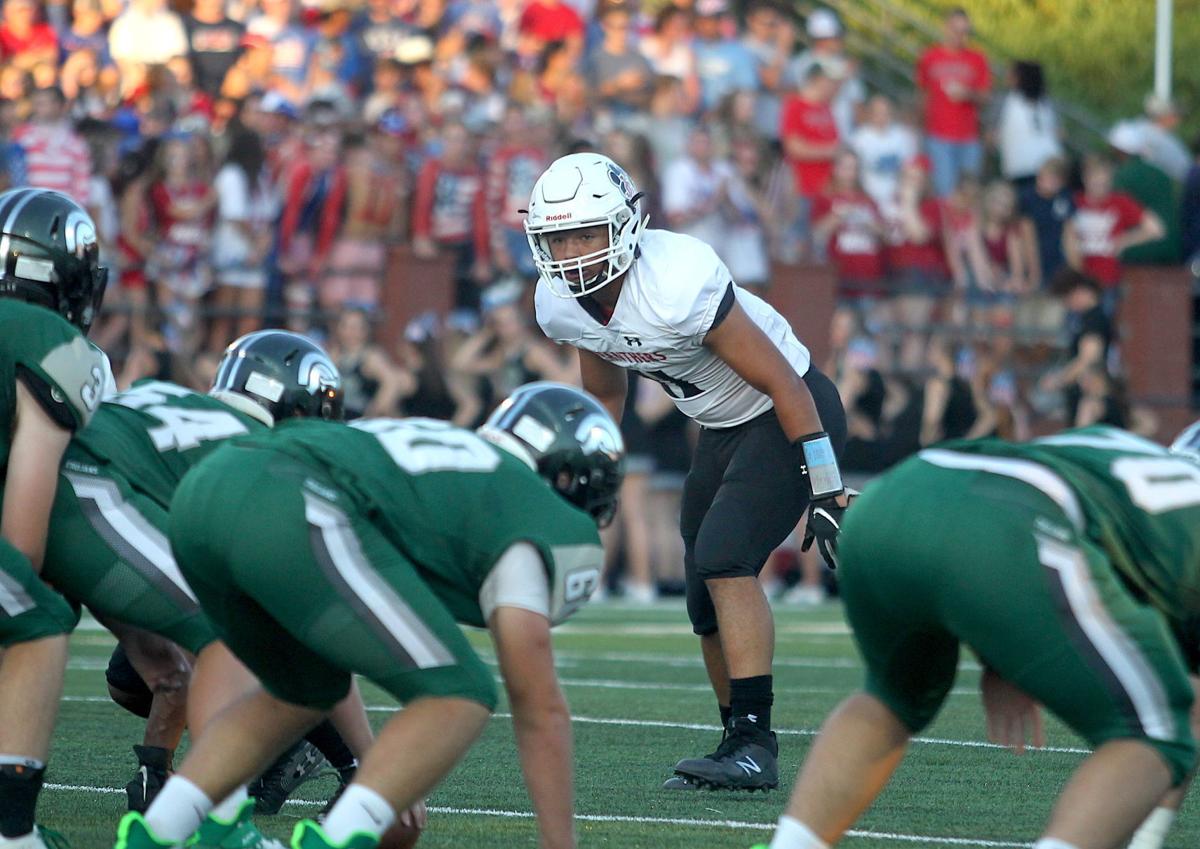 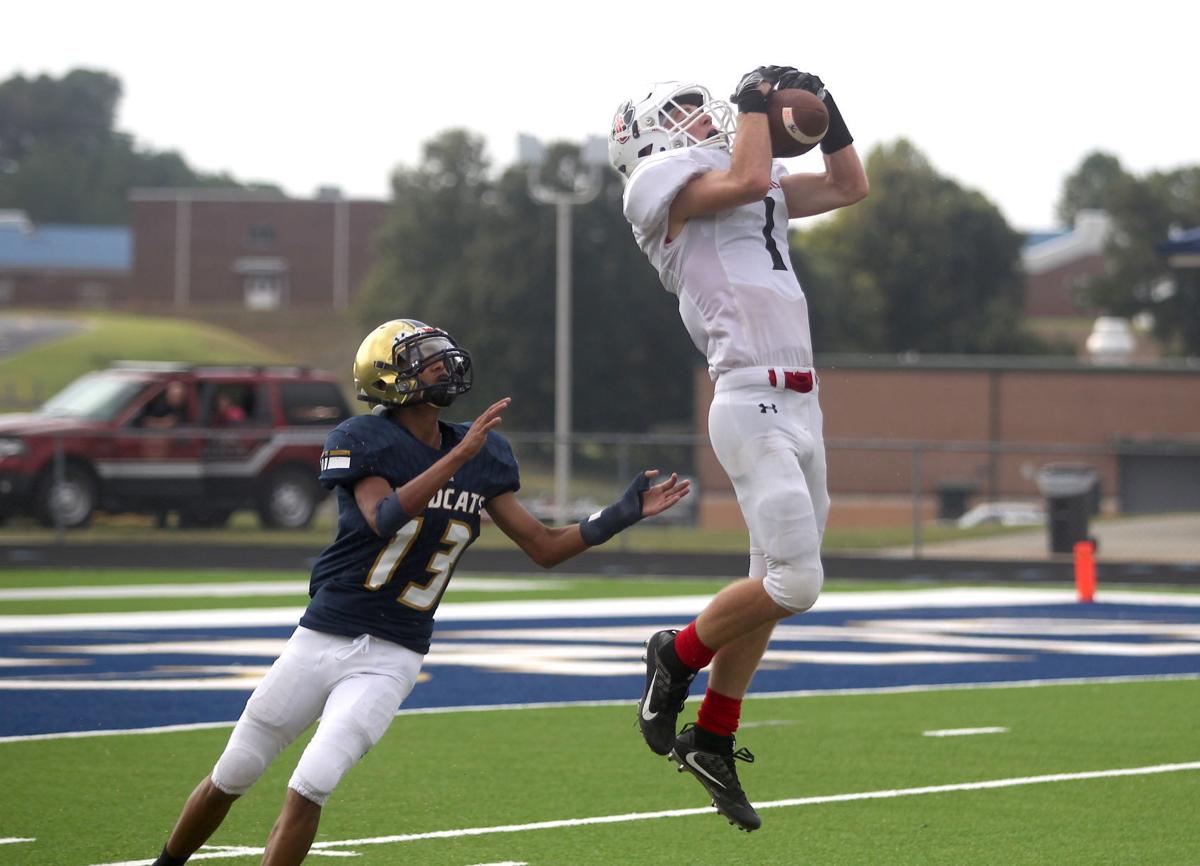 Jackson County's Gabe Lockridge will play at Maryville College after emerging as one of the Panthers' top receivers in the team's spread offense last year. 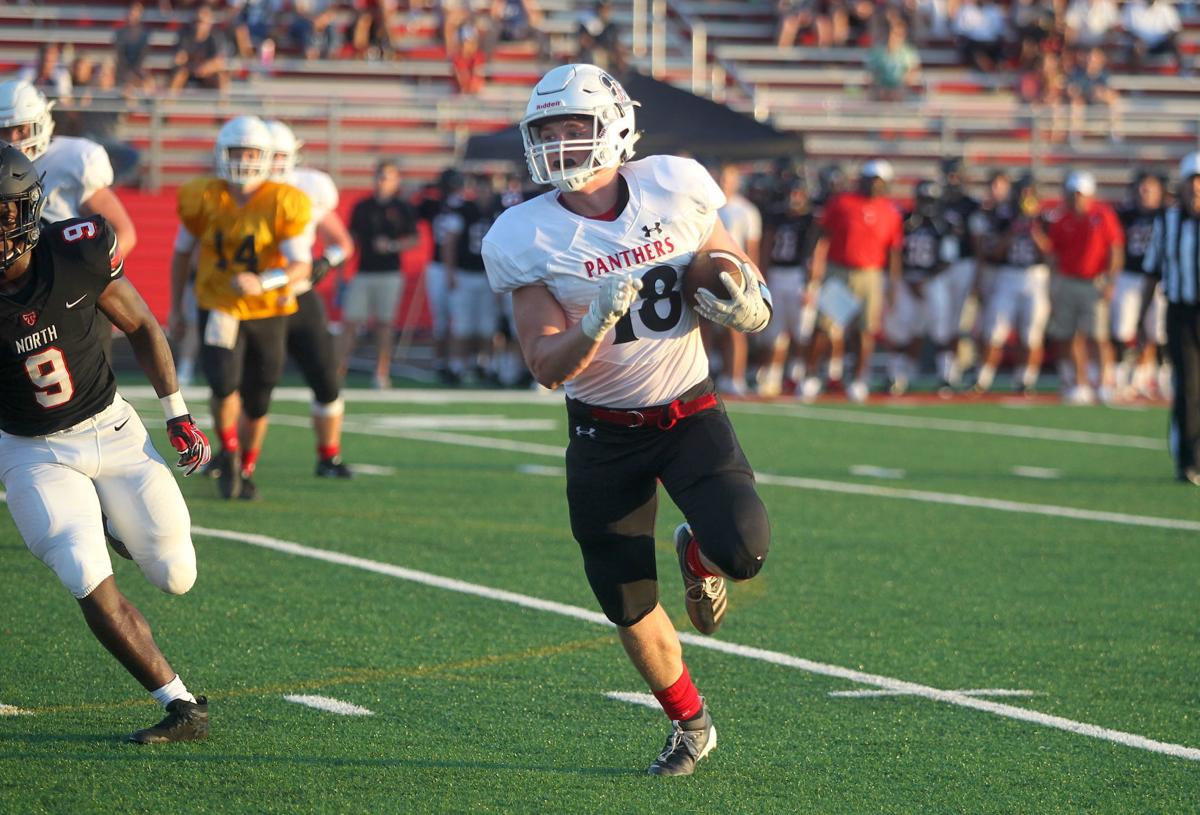 Jackson County's Tyler Wester was used in multiple roles on offense last year and was a defensive standout for the Panthers. He will play college football at Southern Virginia. 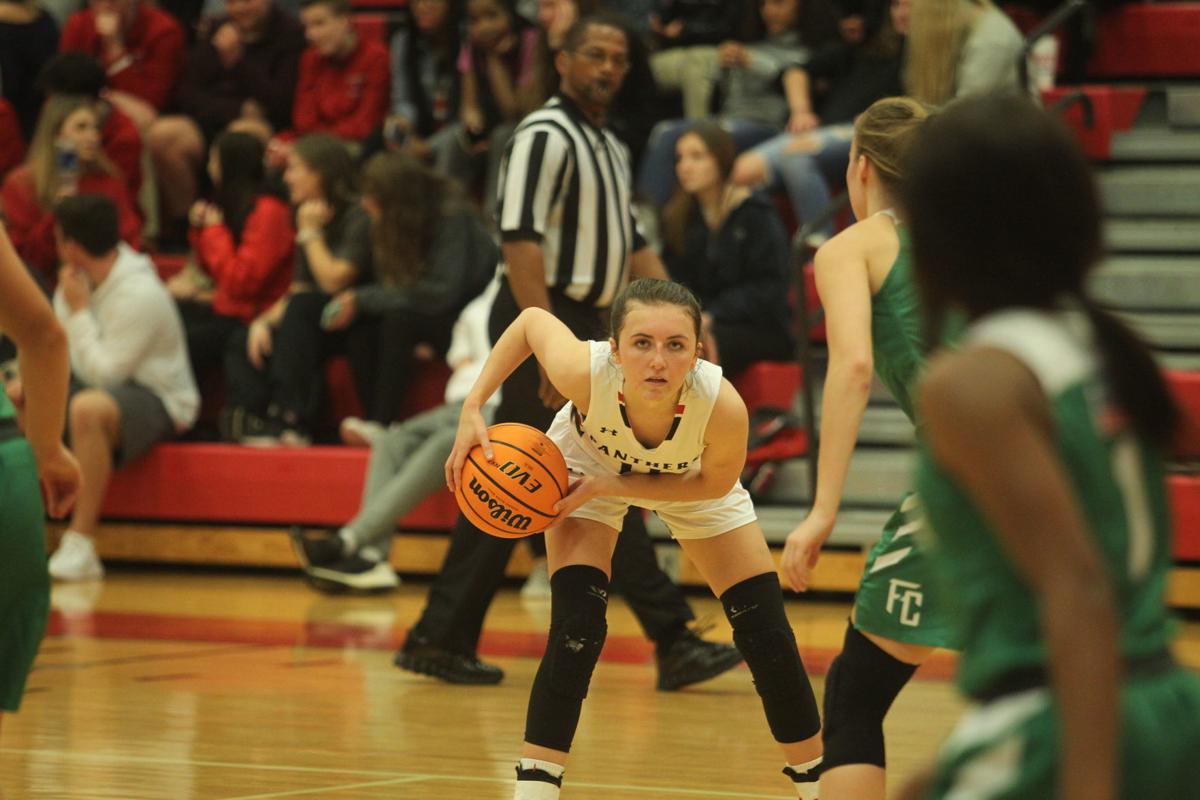 Jackson County's Bailee Bejin, who ranked second on the girls' basketball team in rebounding in 2019-20, is headed to Brenau to play college basketball. 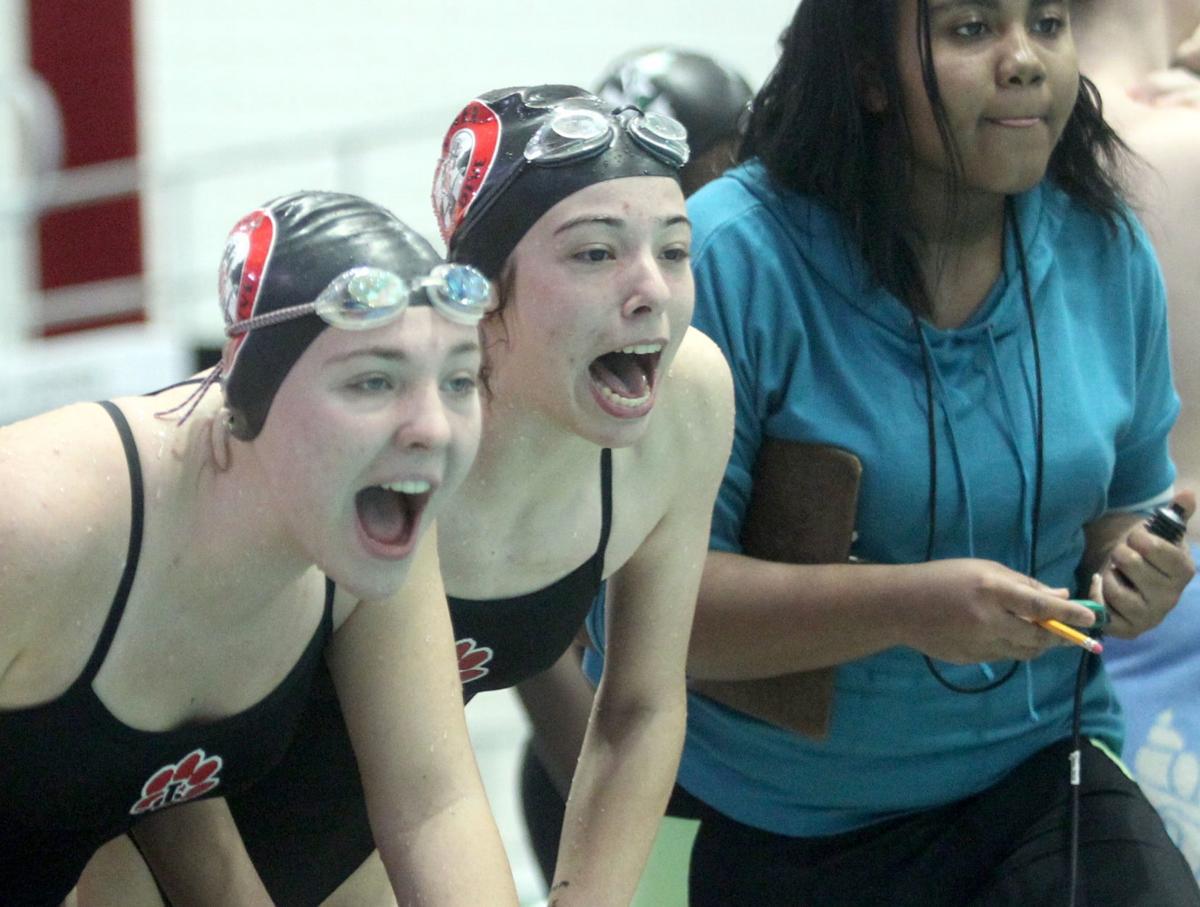 Emily Giles (center) will swim at Brenau after being part of the first-ever relay team in Jackson County school history to qualify for the state meet.

Jackson County's Gabe Lockridge will play at Maryville College after emerging as one of the Panthers' top receivers in the team's spread offense last year.

Jackson County's Tyler Wester was used in multiple roles on offense last year and was a defensive standout for the Panthers. He will play college football at Southern Virginia.

Jackson County's Bailee Bejin, who ranked second on the girls' basketball team in rebounding in 2019-20, is headed to Brenau to play college basketball.

Emily Giles (center) will swim at Brenau after being part of the first-ever relay team in Jackson County school history to qualify for the state meet.

Though signing ceremonies haven’t happened due to schools being closed in response to the coronavirus outbreak, five more Jackson County Comprehensive High School athletes recently made their collegiate decisions.

Here’s more on each of these five athletes:

Micah Swift will move on to Ferrum College after ranking as Jackson County’s leading tackler from his linebacker spot this past season and earning recognition as the team’s top defensive player.

“He had a great year for us,” Jackson County coach Rich McWhorter said. “He was our defensive MVP, led our team in tackles. That’s what you really hope for is that a guy has his best year his senior year.”

Swift was also a second-team all-region selection in 8-AAA at linebacker. McWhorter is excited that Swift has four years of football at the next level in front of him.

Ferrum is a NCAA Division III school located in Virginia. McWhorter expects Division III to be “a great level for him.”

“I think that he’ll continue to develop,” he said. “I think he came a long way just in his last year. I think he’ll keep developing. I think he’’ll do a great job for them.”

Lockridge, a wide receiver, emerged as one of the Panthers top pass-catchers in Jackson County’s newly-installed spread offense this past fall.

“He’s a really smart football player,” McWhorter said. “I think in our style of offense … he really only had one year opportunity to catch balls like we were willing to throw them. If he had had four years of this, who knows? But he really had a great year for us.”

McWhorter said he thinks Lockridge, an all-region honorable mention selection in 8-AAA in 2019, has put himself in a good position at Maryville (an NCAA Division III school), which the coach said he recently visited.

“What a great, great place, what a beautiful school and football facility and all that,” he said. “I think it’s going to be a great fit, and I think he’s going to really enjoy that.”

The coach said Lockridge’s disciplined route-running and good hands will give him the chance to succeed on the next level.

“I think once he gets adjusted to the college level, he’ll have a chance to do a great job there,” McWhorter said.

Wester did a little bit of everything for the Panthers as a ball carrier and pass catcher in Jackson County’s offense and as one of its best defensive players. He was a first-team all-region selection for 8-AAA on defense.

“I think he’s college-ready simply because of the way he works in the weight room and his strength and toughness and his intelligence and all that,” McWhorter said. “Those things put together, I think he’s ready to go. I think you’ll see him right away make an impact for that football team.”

McWhorter said Wester played so many different positions for the Panthers, “it’s almost like we wish we had three or four of him.”

The coach said Wester’s best fit in college could be on the defensive side of the ball as a strong safety, noting his ability to run with wide receivers and tight ends but also being able to play down in the box with his physicality.

“I believe once he gets on campus, I’m sure the coaches will be kind of fighting over to see who gets him in their group,” McWhorter said. “Because he’s a guy that could play wide receiver, tight end or running back on offense. On defense, he could play any of the linebacker spots and strong or free safety.”

McWhorter said Wester was a member of a small but quality group of seniors on the 2019 team.

“I tell you, this group of seniors has been as good of a group as I’ve had as far a high character and buy-in,” he said. “They’re going to missed.”

Bejin will move on to basketball at Brenau after averaging 2.4 points, 4.1 rebounds and 1.1 steals per game this past season. She was Jackson County’s second-leading rebounder.

Julie McCutcheon, who coached Bejin as a freshman and then again this past season when McCutcheon stepped in as interim coach, said Brenau “is getting an all-around outstanding student athlete.”

She described Bejin as hard working and coachable “with a great attitude.” She pointed specifically to her defensive prowess.

“She was our defensive specialist this season,” McCutcheon said. “Any opponent that we needed to stop, Bailee was always eager to take on that tough assignment. Our team fed off of Bailee's scrappy play and willingness to always step up and take a charge. The sacrifices that she made for the success of our team shows the type of selfless player that she is.”

McCutcheon added, “Our coaching staff could not be more proud of Bailee in achieving the honor of playing at the collegiate level. This success couldn't happen to a more deserving young lady.”

Giles will swim for Brenau after reaching the state meet this past February as a member of Jackson County’s 200-yard freestyle relay team.

Cameron O’Reilly, who served as an assistant for Jackson County in 2018-19 before taking over as head coach this past season, said “it has truly been on honor having the opportunity to coach Emily the last two years.”

“In terms of being a great student athlete, I couldn’t possibly ask more of Emily,” he said. “She has a phenomenal work ethic, and I look forward to seeing where that carries her as she moves on to the college level.”

Giles’ efforts helped the 200-yard freestyle relay team break the school record multiple times this year, including a program-best 1:50.63 at state meet. The relay team was also the first-ever in school history to advance to the state meet.

“Emily will leave behind a legacy of being a part of the first relay team to qualify for state at JCCHS and was a big part of motivating and leading the team throughout the year,” O’Reilly said. “She will be greatly missed next year as the team continues towards our goals again. The Panthers family and community couldn’t be prouder of her and looks forward to seeing what she will accomplish in the future, both in the pool and in life.”