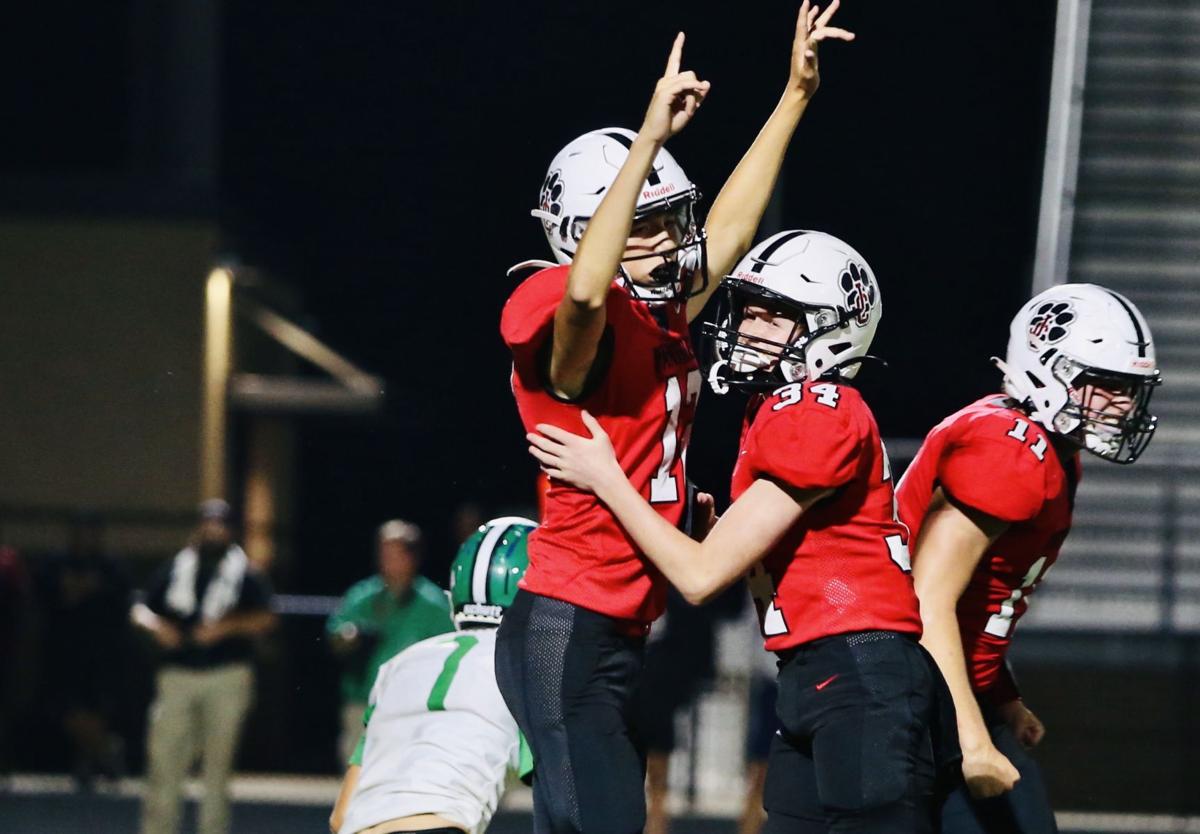 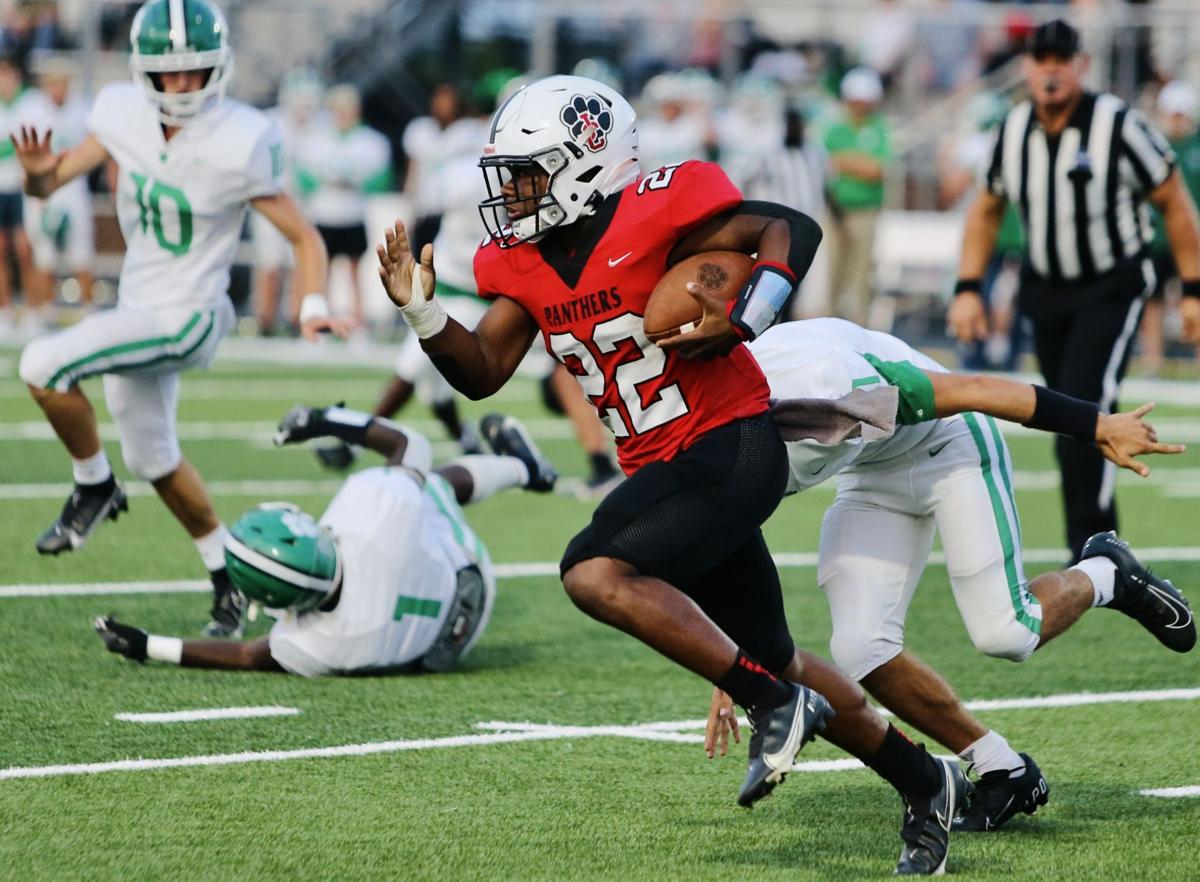 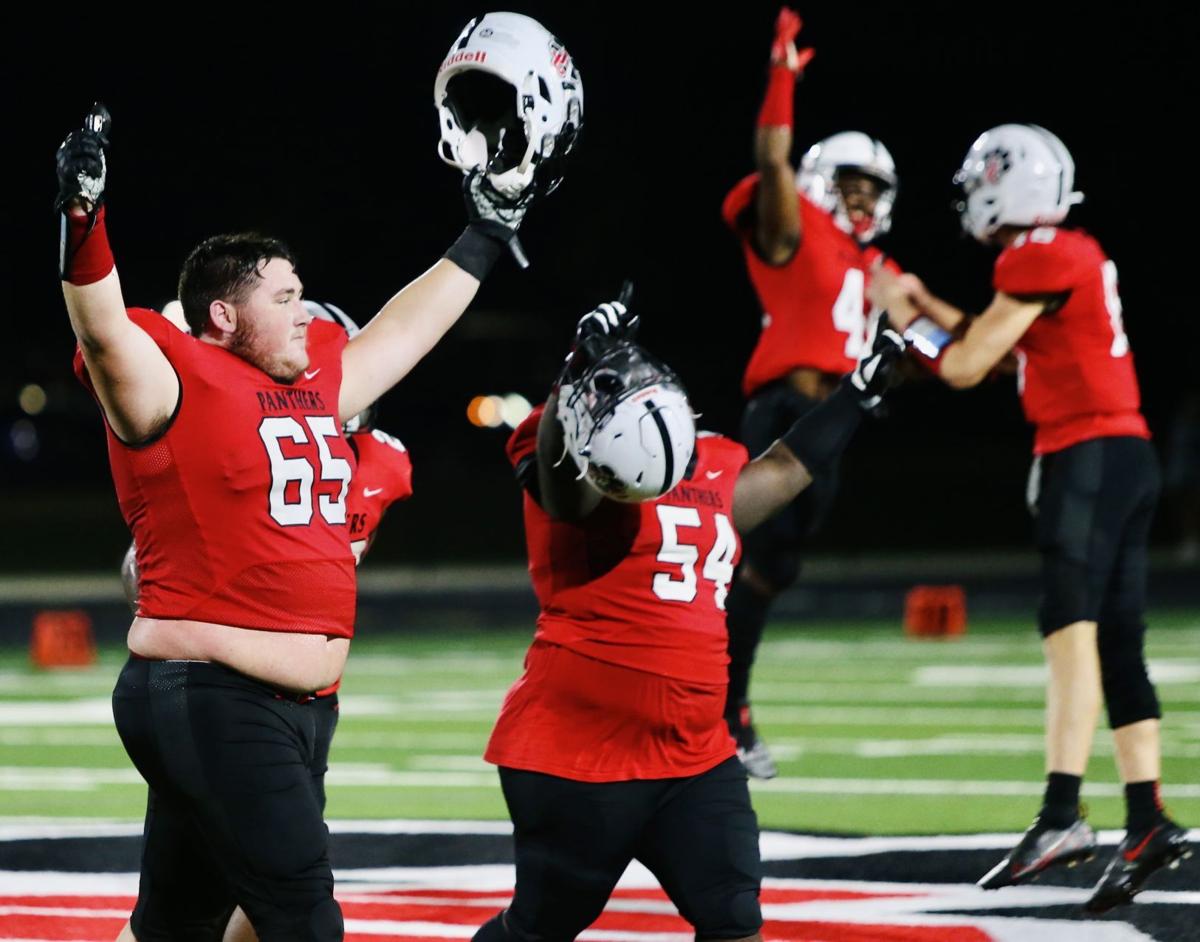 Jackson County's Evan Rosser (No. 65) celebrates with his teammates after Friday's (Sept. 10) 20-19 victory over Franklin County.

Jackson County's Evan Rosser (No. 65) celebrates with his teammates after Friday's (Sept. 10) 20-19 victory over Franklin County.

A disastrous start to the second half made the finish all the more memorable for Jackson County.

Brice Rogers booted a 27-yard field goal with 2:39 remaining and the Panther defense produced a stop late as Jackson County (2-1) rallied for a 20-19 home victory over Franklin County Friday (Sept. 10).

In winning, the Panthers overcame a brutal third-quarter that included Franklin County scores off a kickoff return and an interception return — both provided by Dee Oliver — and the ejection of coach Rich McWhorter.

“They show up and work every day,” Jackson County defensive coordinator Tyson Baxter said when asked about the team's resiliency. “Our work is not the problem. We’ve just got to learn how to win, and that’s going to help today.”

Jaden Cofer re-ignited the Panthers with a 47-yard touchdown run on an end-around with 1:22 remaining in the third quarter.

Jackson County then put together the decisive field-goal drive late in the fourth quarter when it marched eight plays and 47 yards to set up Rogers’ 27-yarder.

“I had to calm myself down, take a couple of deep breaths, just do what I’m supposed to do,” said Rogers, who also hit a 39-yard field goal in the win. “My teammates helped me get there, and I just put it through the uprights like I was supposed to.”

Rogers had never attempted a game-deciding field goal and admitted to being nervous before converting the kick.

"I was nervous, but I knew I could get it done," he said.

Baxter praised the entire special teams unit on the kick.

"I'm proud of all of them," he said. "We got a good hold down, the protection up front, it was everybody."

Jackson County’s defense only surrendered one offensive touchdown in the win — a first-quarter, 51-yard touchdown run from Micah Blackwell — while forcing six punts and recording an interception. The Panthers' Elijah Ling put the game away with 56 seconds left when he picked off a Chris Goode pass on fourth down.

"They had a great week of practice," Baxter said of the defense. "It's all about the kids. My coaching staff on our side of the ball schemes it up, and they put it in order. It's all about them playing. They hustle to the ball, and that's all we can ask."

Jackson County — which had lost its previous two games to Franklin County by a total of eight points — found itself having to fight back early on, down 6-0 with 4:28 left in the first quarter after Blackwell broke his long touchdown run.

But Anthony Finley answered with the Panthers’ first points of the contest, scoring on a 2-yard run off an end-around with three seconds left in the first quarter. Rogers’ extra point put the Panthers ahead 7-6.

A fumble recovery on the ensuing kickoff then set up Rogers’ 39-yard field goal with 9:02 left in the second quarter.

Things appeared to be unraveling in the third quarter, however, when Franklin County's Oliver took the opening kickoff of the second half all the way back and later snagged a deflected pass and raced 70 yards to the end zone to put the Lions up 19-10 with 5:48 left in the third quarter.

McWhorter was sent to the locker room in between those two scores. He was ejected after arguing a second-straight holding call during a flag-filled first offensive series of the second half for the Panthers.

Jackson County also fumbled the ball away on its third possession of the third quarter.

Yet, it still found a way to end the non-region portion of its schedule on a winning note.

"We had to calm the kids down just a little bit and get them back to our game plan ... We knew it was going to be four quarters," Baxter said. "We were going to get punched, and we had to punch back. That was pretty much it."

"We just try to take it one game at a time," Baxter said. "We're going into region play, so we've got to start off 1-0 in region play and see what happens from there."