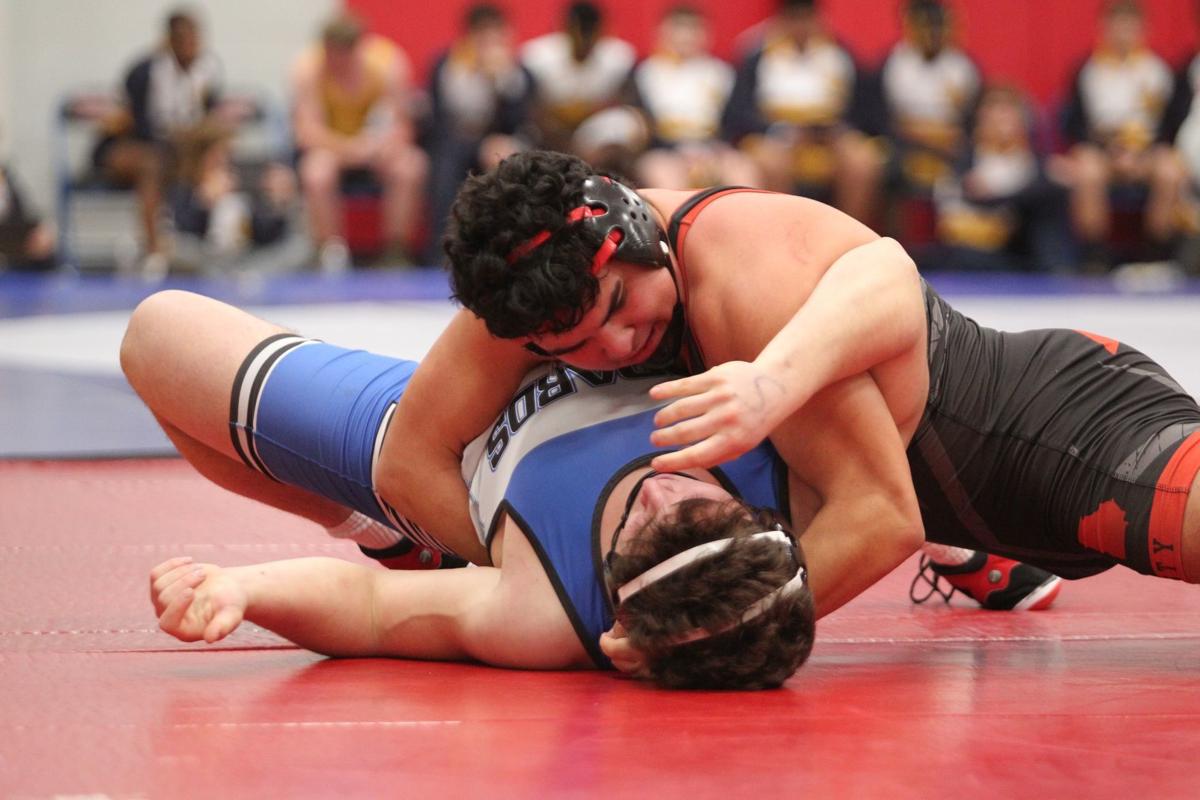 Jackson County's Devonte Stephens forces an opponent from Banks County to the mat during action in Saturday's (Jan. 4) dual tournament at Oglethorpe County. The Panthers host the Area 6-AAA duals this Friday (Jan. 10). 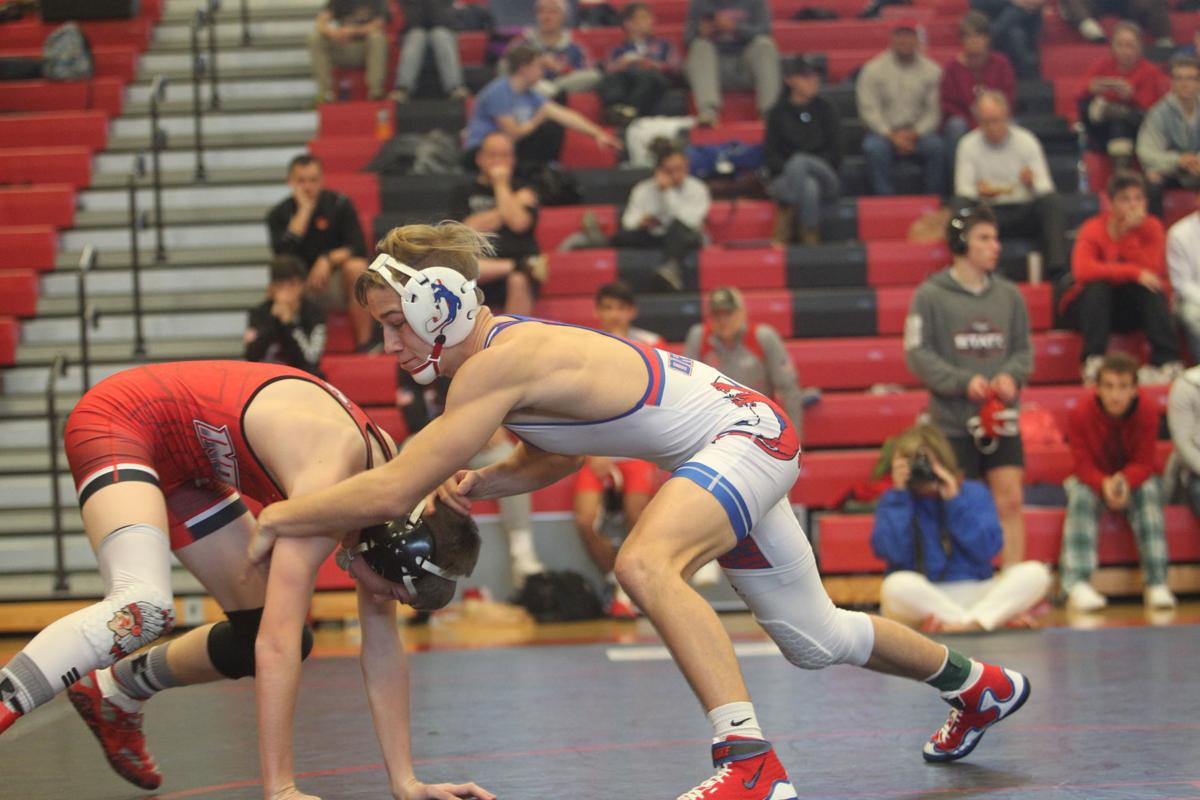 Jefferson's Tyson Thurmond competes in action earlier this season for the Dragons, who are off to an 11-0 duals start this year. Jefferson will compete in the Area 6-AAA duals Friday (Jan. 10) at Jackson County.

Jackson County's Devonte Stephens forces an opponent from Banks County to the mat during action in Saturday's (Jan. 4) dual tournament at Oglethorpe County. The Panthers host the Area 6-AAA duals this Friday (Jan. 10).

Jefferson's Tyson Thurmond competes in action earlier this season for the Dragons, who are off to an 11-0 duals start this year. Jefferson will compete in the Area 6-AAA duals Friday (Jan. 10) at Jackson County.

A pair of crosstown rivals could again find themselves on a collision course for the area duals title.

The Jackson County and Jefferson wrestling teams both enter the Area 6-AAA duals with sights on a championship when Jackson County hosts the nine-team tournament Friday (Jan. 10) at 4 p.m.

“We definitely can’t overlook anybody in our area, but going in, looking ahead, us and Jefferson seem to be the top two contenders,” Panther coach Jason Powers said.

Jefferson beat Jackson County 43-21 last year in a competitive area final. A year later, the Panthers are 19-1 on the season with their lone loss coming to defending Class AAAAA champion Woodland-Bartow, while Jefferson — riding a historic streak of 18-consecutive state dual titles — stands at 11-0 in duals matches (as of Tuesday, Jan. 7).

Now, the Panthers have the prospect of winning an area title before them.

“It’s going to be a tough dual,” Powers said. “I’m extremely excited about it. I’m excited about the opportunity our kids have. I’m hoping we can start at a good weight class — get a lot of momentum going.”

The coach pointed to the in-match factors that will come into play at Friday’s duals.

“With a dual this tight, it always comes down to who gets choice, where they get choice and where the dual meet starts at,” Powers said. “And that’s going to determine a lot of different things, but it can’t really determine how our kids wrestle.”

Powers added that he hopes, “The home crowd will play a little bit of a factor into it as well.”

Meanwhile, a young Jefferson team has one dual-tournament championship, the Dec. 21 Tommy Warren Duals in Oconee County, to its credit in addition to its perfect record. The Dragons enter the area duals having just gotten back to full strength. Sickness and injury have struck the storied program hard this year under first-year coach Kyle Baird.

Jefferson has had multiple wrestlers out of the lineup at certain points this year and is just now welcoming back 126-pounder Mason Mingus, a state champion at 106 last year. Mingus has spent the past month on the disabled list following an elbow fracture on Dec. 7.

“That’s a huge sigh of relief for me,” Baird said of Mingus’ return.

The outbreak of the flu also hit Jefferson significantly, so much that Baird canceled a Thursday trip to Traveler’s Rest, S.C. for a series of dual matches. The coach didn’t have enough healthy wrestlers to make the trip (Baird was even stricken with the flu, too). All wrestlers returned to practice on Friday.

The Dragon lineup returns to full strength just in time for a challenging area duals tournament. But Baird said he feels better now than he did at the beginning of the season with starters back in the lineup and the team demonstrating improvement overall.

With a tough tournament ahead Friday, the coach said he looks forward to the challenge of trying to defend another area title.

And the Panthers are looking forward to this challenge, too.

“I’m extremely excited,” Powers said. “I know the guys are excited about the opportunity to get out there and compete. Again, it’s another area tournament. It’s preparation for state for us, so obviously seeding does matter coming out of this thing … With all that on the line, it’s just another exciting chance for us to get out there and compete and see what happens.”

EAGLES SET FOR DUALS AS WELL

Count East Jackson as another squad eager to wrestle Friday. Coach Andrew Gaddy expressed confidence in his team in advance of the duals.

“I feel great going into area duals,” he said. “We are wrestling the best we have all year.”

But Gaddy also noted the challenge in front of his team.

“We know we are in a tough area,” he said. “I have been preaching that each wrestler needs to do their job in their match. Trust your teammates will do what they need to do.”