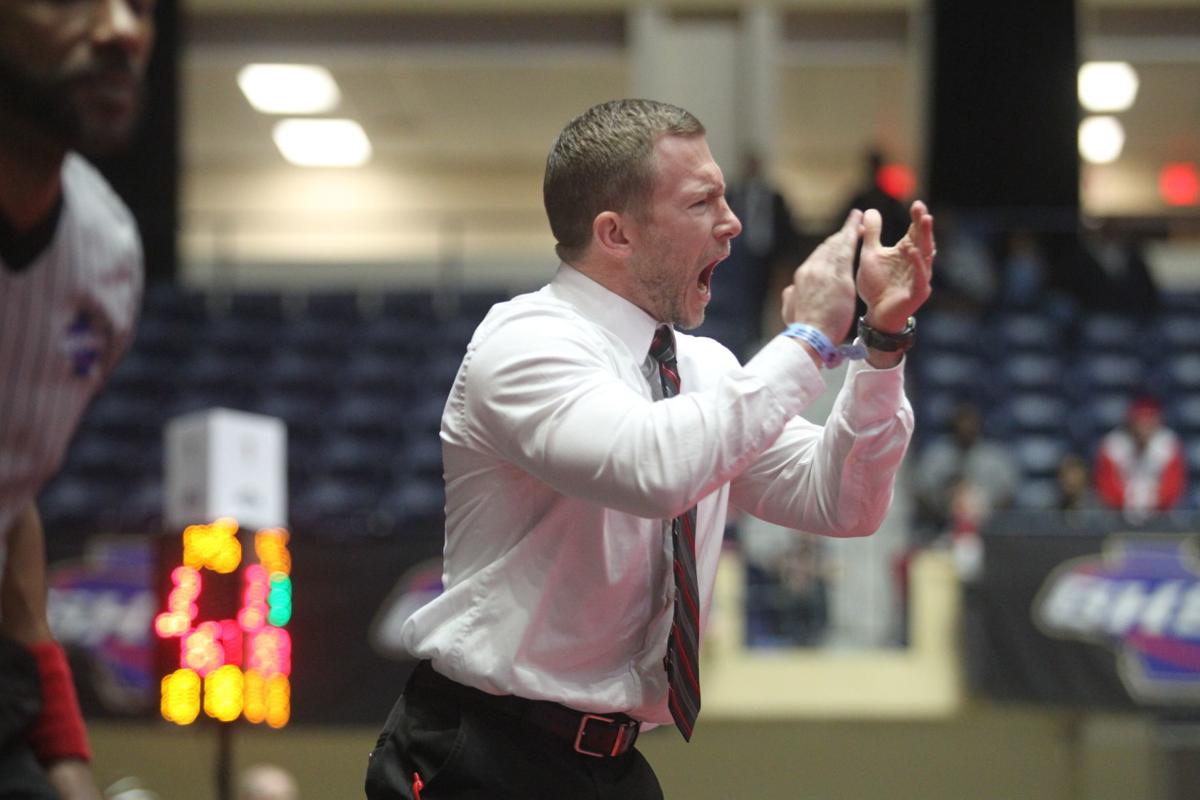 Jackson County wrestling coach Jason Powers celebrates after a win in a bout during the Panthers' state dual consolation finals match against Jefferson. Jackson County won 32-29 to finish third in Class AAA. The victory was also the Panthers' first dual win over the Dragons in 18 years. 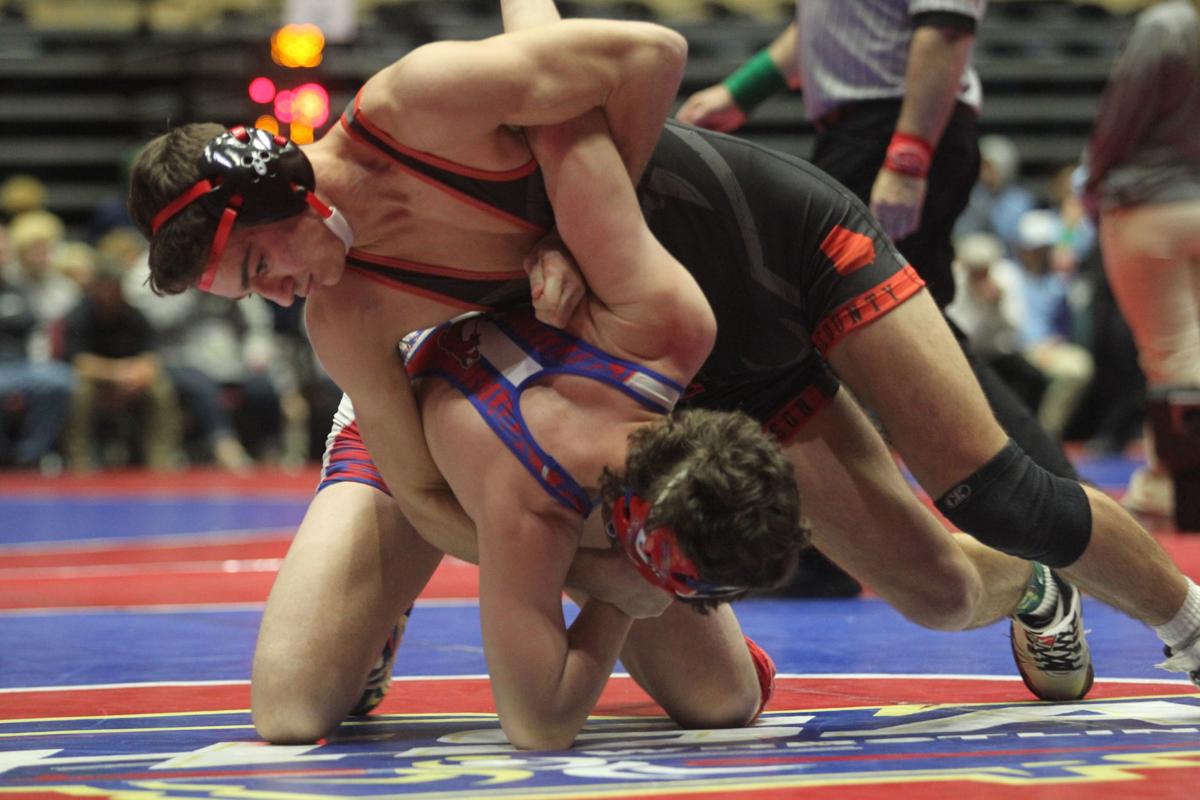 Jackson County's Nathan McArter picks up a win over Jefferson's Dawson Lee in the 145-pound match in the Panthers' consolation finals win over the Dragons in the Class AAA state duals. 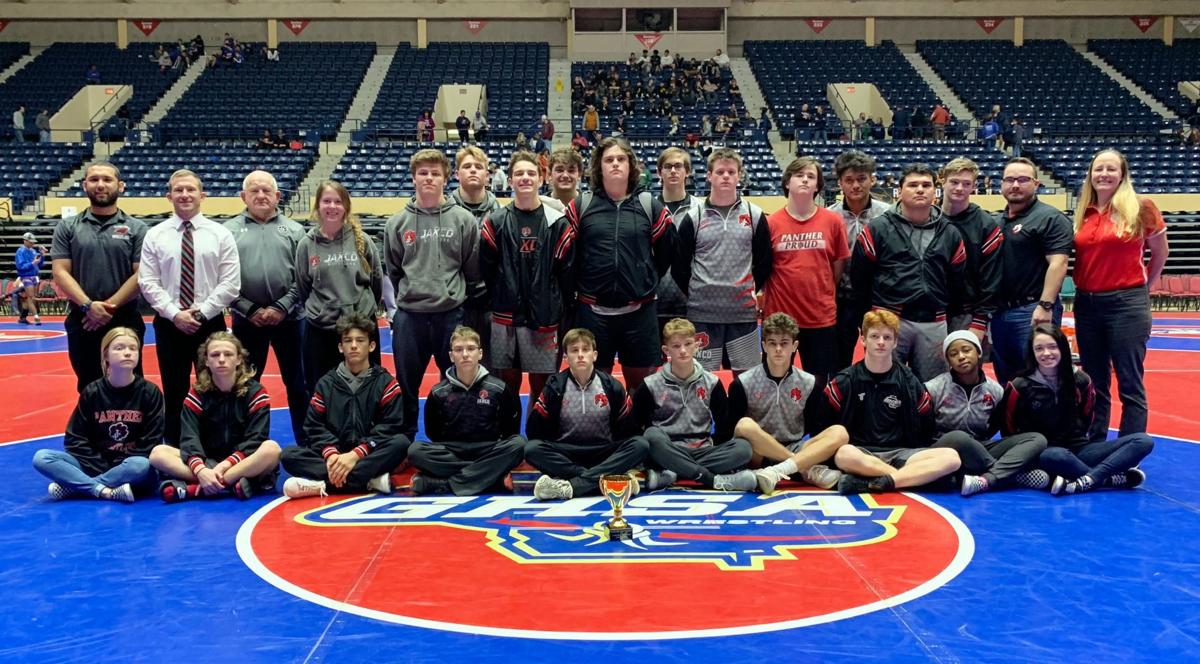 The Jackson County wrestling team took third in the Class AAA duals, beating Jefferson 32-29 in the consolation finals. It marked the Panthers' first dual win over the Dragons since 2002.

Jackson County wrestling coach Jason Powers celebrates after a win in a bout during the Panthers' state dual consolation finals match against Jefferson. Jackson County won 32-29 to finish third in Class AAA. The victory was also the Panthers' first dual win over the Dragons in 18 years.

Jackson County's Nathan McArter picks up a win over Jefferson's Dawson Lee in the 145-pound match in the Panthers' consolation finals win over the Dragons in the Class AAA state duals.

The Jackson County wrestling team took third in the Class AAA duals, beating Jefferson 32-29 in the consolation finals. It marked the Panthers' first dual win over the Dragons since 2002.

The Panthers defeated rival Jefferson, 32-29, Saturday (Jan. 18) in Macon in the Class AAA state duals third-place match, beating the Dragons in a dual match for the first time since 2002. The third-place finish snapped a string of three-straight fourth-place dual finishes for Jackson County.

“We’ve got fourth the past three years … to be able to beat Jefferson, crosstown rival, it’s just like winning state for me,” senior Panther wrestler Tyler Wester said. “Great feeling. They’ve got a great team. It was awesome.”

The Panthers’ victory avenged a 44-18 loss to the Dragons just eight days earlier in the Area 6-AAA championship match.

“It was a revenge tour,” senior wrestler Kaden Andreasen said of the Panthers’ mindset in the state duals. “… It was fun. I was happy. It’s exciting.”

Jackson County and Jefferson split Saturday’s matches at seven bouts each, but the Panthers picked up bonus points with three pin falls and a technical fall in pushing the match in their favor.

The Panthers trailed 21-0 after the lower-weight matches, which proved to be a manageable deficit given the strength of matchups for Jackson County in the middle and upper weights.

Mario Bolivar won 8-4 over Bryan Cox at 138 for the Panthers’ first points, and Nathan McArter followed with a pin of Dawson Lee at 145. Jacob Crumley provided more bonus points with a technical-fall win (18-2) over Grant Hamilton at 152, and Kaden Andreasen pulled out a 7-5 overtime win over Luke Cochran at 160. Aiden Giroux later picked up a 5-1 decision over Reilly Dugan at 182, and Tyler Wester and Devonte Stephens delivered back-to-back pins. Wester earned a pin fall at 195 over Cannon McKinney and Stephens pinned Cutter Love at 220.

In the win, the Panthers used different pairings in four weight classes from the two teams’ Jan. 10 meeting in the 6-AAA area finals, and won three of those four bouts. Bolivar and McArter switched at 138 and 145, and Andreasen and Garrett Bennett traded at 160 and 170. Another difference in the rematch: Crumley provided a bonus-point win at 152 after losing in overtime at the area finals.

“We made some tough, tough matchups for them and said, ‘Hey, you’ve got to go get your job done,’” Jackson County coach Jason Powers said of his team's performance. “And 14 weight classes strong, they stepped on the mat, and everybody did their job.”

He said beating a program of Jefferson’s stature is significant.

Powers also noted the time gap between wins over the Dragons. The most recent victory came during his junior year when he was a member of the Jackson County wrestling team.

He said there was “a lot of emotion” felt as the final moments ticked away in Saturday’s match and the third-place finish was secured.

“It’s just something, as a program, that we’ve been working towards,” Powers said. “Yeah, we work to win state titles, but we know who we have to beat to be able to get there, and this is one stepping stone in that direction.”

The coach pointed to a moment before the match.

“We started the coin toss and they (the officials) look at them and they go, ‘OK, this is Jefferson and please remind me of who you are,’” Powers said. “That’s huge. We’re not a ‘who are you?’ again.’ It’s we’re Jackson County.”

Jackson County opened the tournament with a 51-24 win over Adairsville Thursday, then lost to eventual-champion North Hall 48-24 Friday in the semifinals. The Panthers battled through a tough consolation semifinals match with Lovett Saturday, winning 39-30, to advance to the consolation quarterfinals.

The Panthers third-place finish at the state duals is one of the team's best-ever in an event that began in 2002. Powers called this a special moment for his program.

“It’s a frameable moment for the amount of work that we’ve put in,” Powers said. “Like I’ve preached to the kids, it’s about putting in the work, and all the outcomes will come, and this is kind of proof in the pudding that hey, we’ve been putting in the work and now we’ve got the outcome.”

Powers also praised the job of his assistant coaches for helping to build the program to where it is now, saying that all could land jobs as head coaches if they wanted.

“And they choose to sit here and continue to work with us,” he said.

“We’ve got a strong couple of weight classes, actually more than a couple,” he said. “So we'll have to wait and see. We’ll keep on working though.”

Powers said he hopes his team’s showing this weekend in Macon is a catalyst for things to come.

“By no means does this mean that we’ve done what we wanted to do this season,” Powers said. “We’ve got a lot of big goals ahead of us. I think this should be able to push us and give us the confidence.”