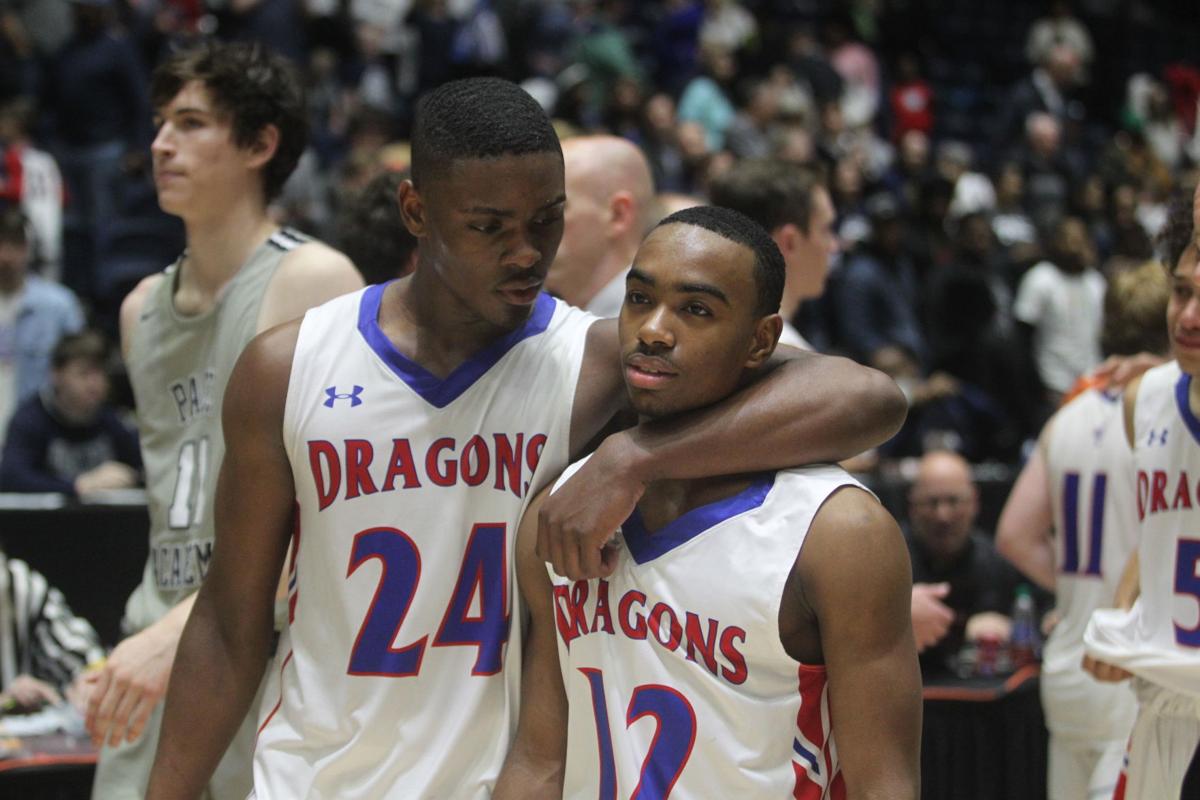 Jefferson’s Malaki Starks (left) and Kam Robinson walk off the court after a 48-35 state finals loss to Pace Academy. 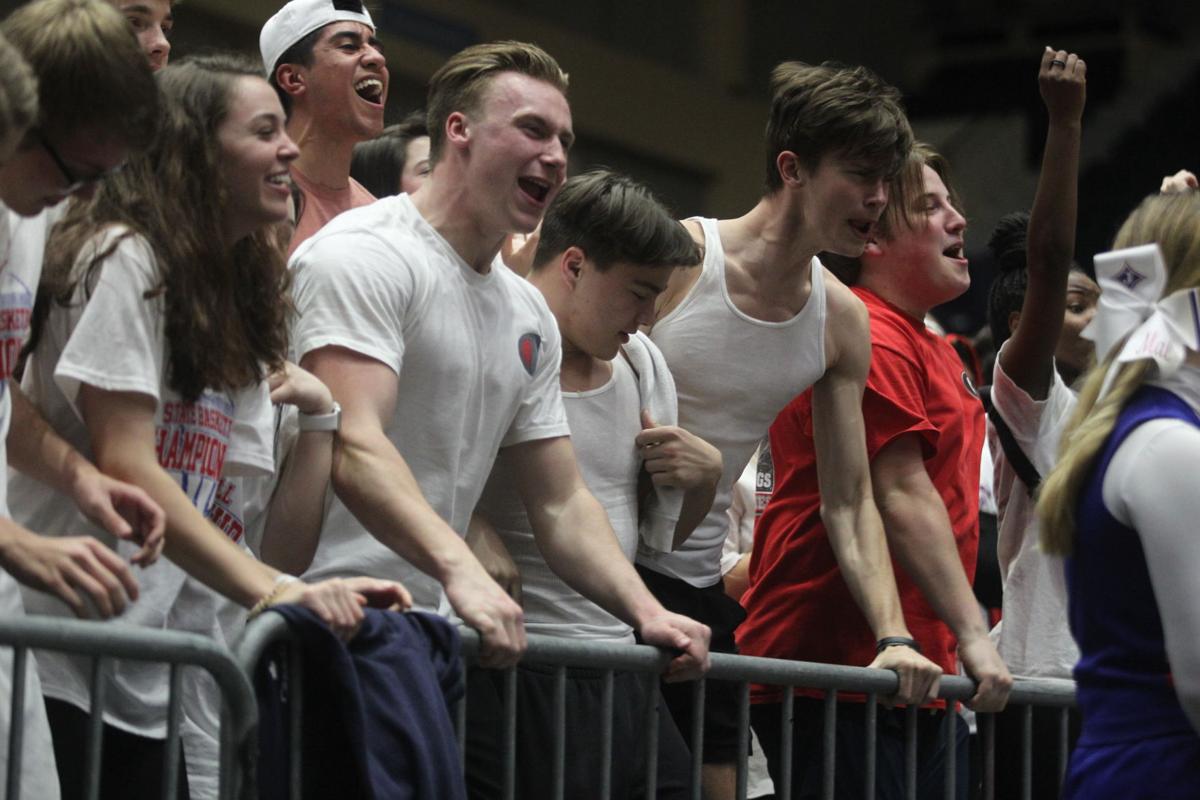 Jefferson students show their support during the fourth quarter of the Dragons’ 48-35 state title loss to Pace Academy. 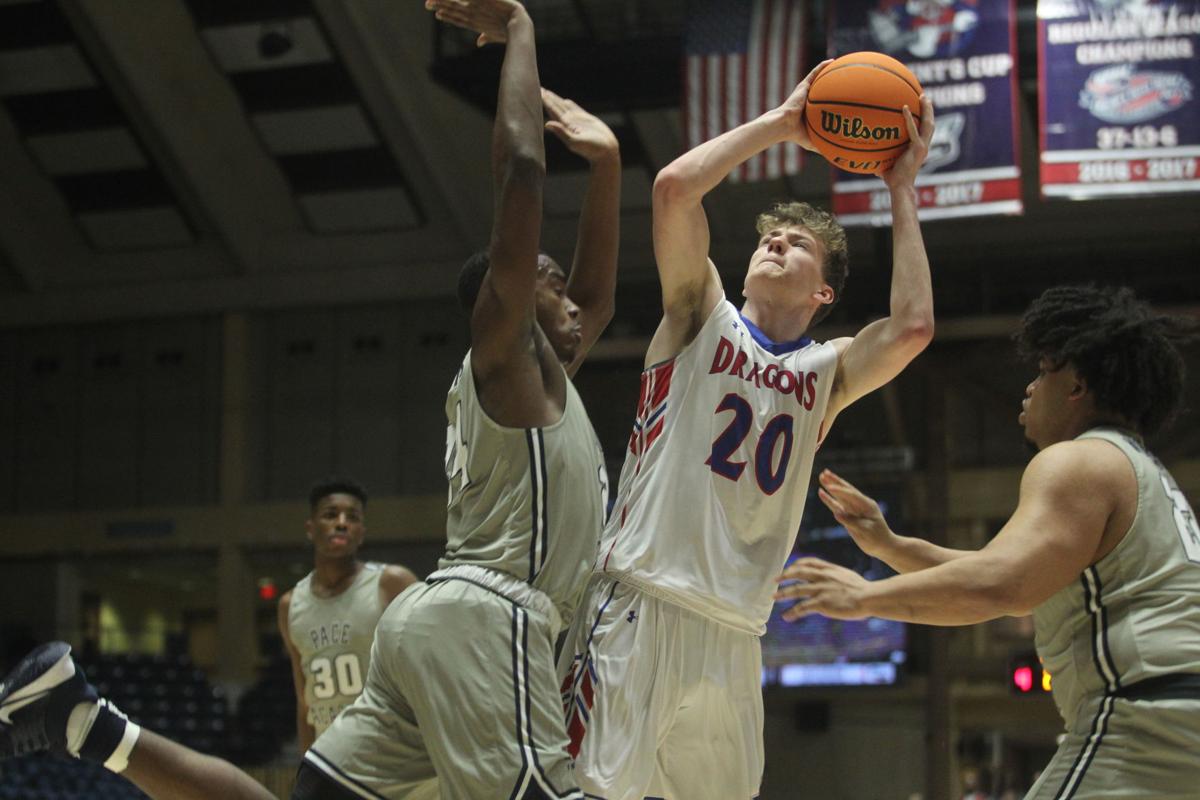 Jefferson's Jacob Radaker puts up a shot in the paint Thursday (March 5) during the Dragons' state finals loss to Pace Academy. 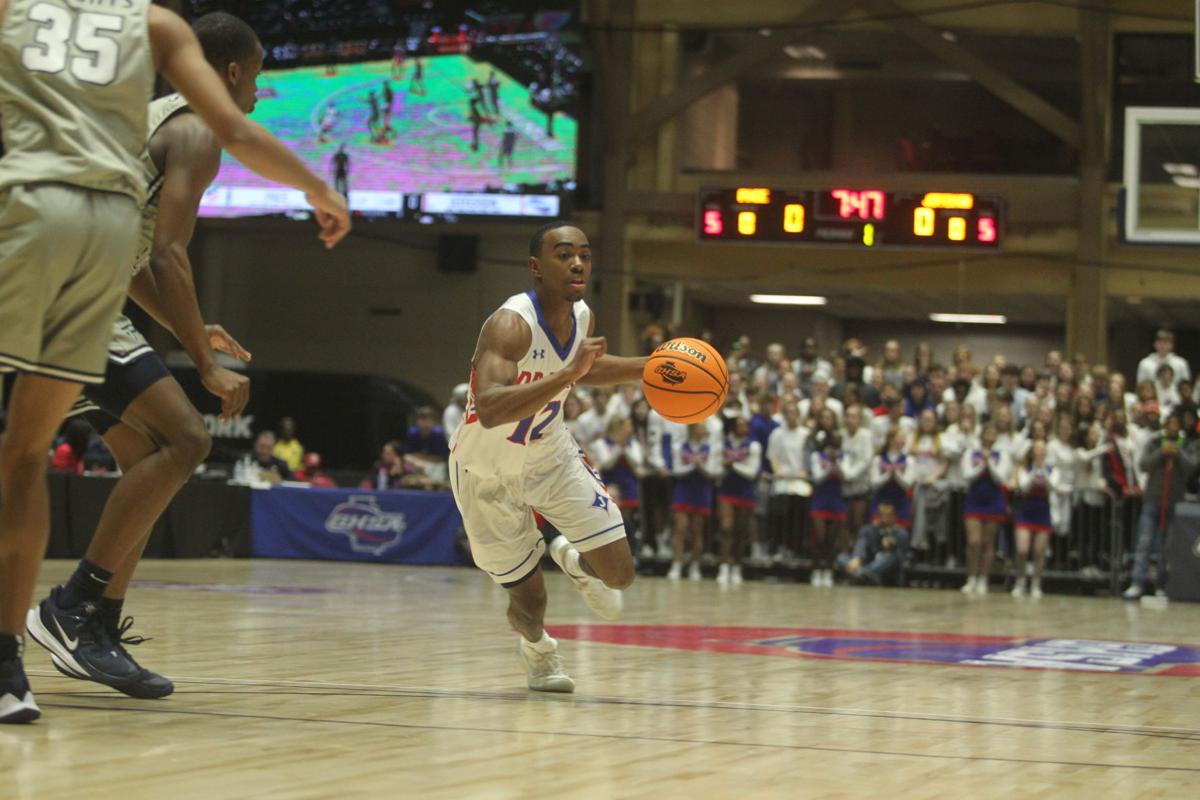 Jefferson's Kam Robinson brings the ball up the floor during the first quarter of the Dragons' state finals loss to Pace Academy. 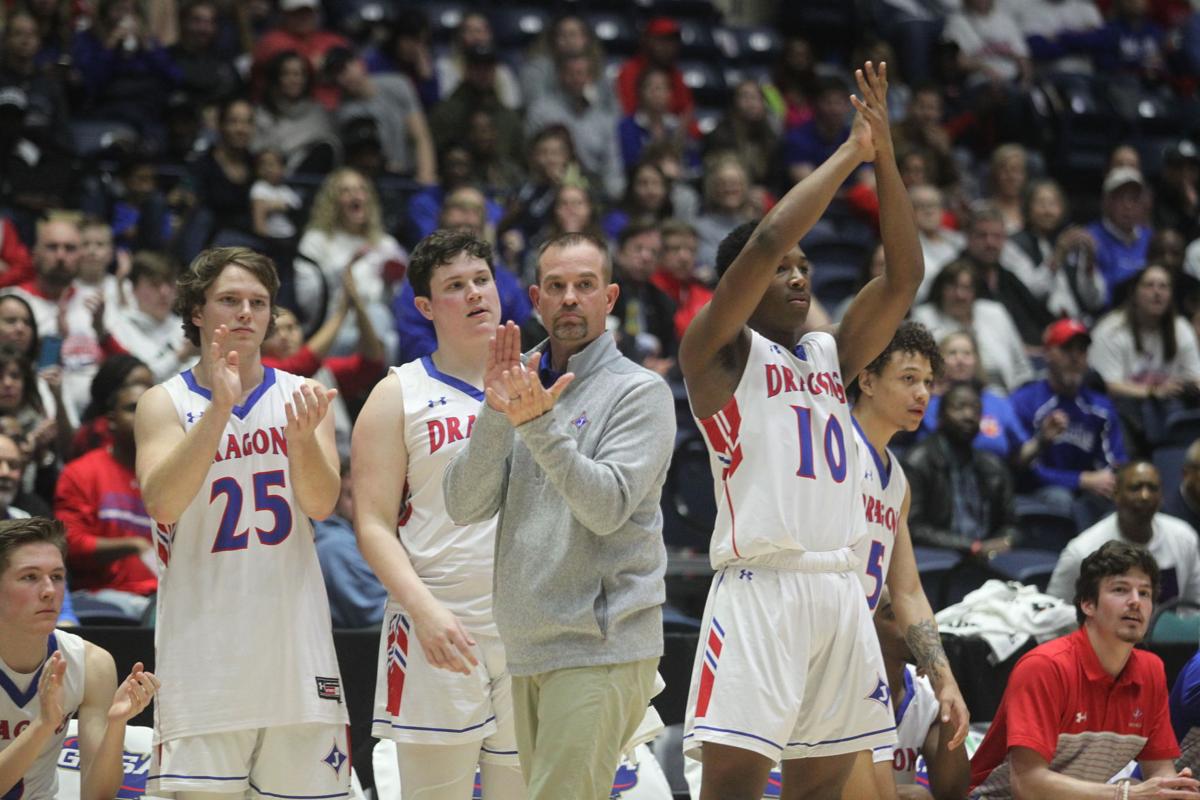 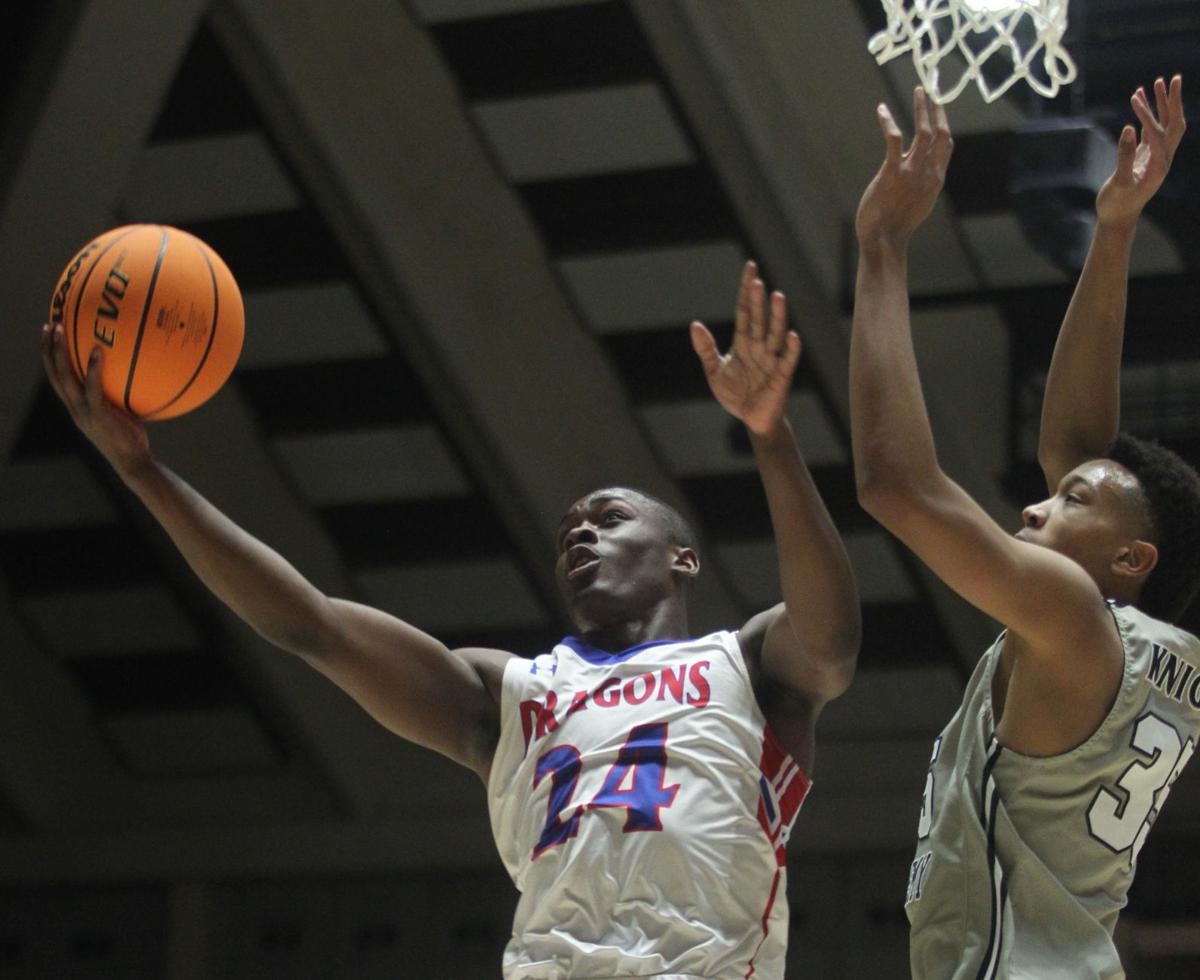 Jefferson's Malaki Starks goes up for a layup against Pace Academy's Matthew Cleveland.

Jefferson’s Malaki Starks (left) and Kam Robinson walk off the court after a 48-35 state finals loss to Pace Academy.

Jefferson students show their support during the fourth quarter of the Dragons’ 48-35 state title loss to Pace Academy.

Jefferson's Jacob Radaker puts up a shot in the paint Thursday (March 5) during the Dragons' state finals loss to Pace Academy.

Jefferson's Kam Robinson brings the ball up the floor during the first quarter of the Dragons' state finals loss to Pace Academy.

Jefferson's Malaki Starks goes up for a layup against Pace Academy's Matthew Cleveland.

MACON — The Jefferson boys’ basketball team walked back to its bus outside the Macon Coliseum to applause from Dragon fans who made the 2.5-hour trip and then hung around afterwards to show their appreciation.

The Dragons did not end the season with a state championship trophy. But they did “change the banner” as they vowed to do this year.

Jefferson finished as Class AAA runners up after losing to private school power Pace Academy 48-35 Thursday (March 5) in Macon in the finals, concluding the most successful season in program history.

Jefferson’s banner hanging in its gym —  the one it aimed to change — will reflect a region championship and its first-ever state finals appearance for its efforts in 2019-20.

“I said I was proud of them,” coach Kevin Morris said of his final message to the team. “They represented our school, our community, each other. They did such a good job. I’m just so proud of their dedication to each other and to our school. You look up there in the stands, that game might as well have been in Jefferson.”

In a low-scoring Class AAA championship game, Owen Parker finished with 11 points, the only Dragon to reach double figures. Jefferson limited Pace Academy star Matthew Cleveland to 10 points — nearly 13 points below his average — but the Knights’ Cole Middleton answered with 15 points. Pace Academy‘s George Adams finished with nine points in just 11 minutes of play, and provided perhaps the biggest shot of the night.

Jefferson had led the entire game until Adams drained a 3-pointer with 47 seconds left in the third quarter. Adams was knocked on his back during the shot and awarded a free throw, which he sank to complete a rare 4-point play and give Pace Academy a 29-28 lead going into the fourth quarter.

“Instead of going in up three, we go in down one,” Morris said. “But it happens. It isn’t anybody’s fault. It’s just kids playing hard, kids trying to do what you ask them to do. They just made a tough shot.”

Adams’ shot and free throw were part of an 11-0 run that extended into the fourth quarter and gave Pace Academy control of the game.

“That was big,” Radaker said of the 4-point play. “It was just a lapse in defense. That kind of play happens all the time in basketball. It just happened to be at that right time when their momentum was going. That really boosted it, and I don’t think we ever came back from that moment.”

The Knights allowed just seven fourth-quarter points and only one basket in the last 2:50 to salt away their third state title in five years.

“That little 3-2 zone, it gave us some fits in the fourth quarter,” Morris said, “and we just didn’t make shots to get them out of it.”

The game started much differently, however.

But Pace Academy opened the second half with six-straight points to pull within a point (20-19) with 6:45 left in the third quarter. Still, Jefferson stayed out in front of the Knights for nearly six more minutes until Adams produced his pivotal 4-point play.

The Dragons also shot just 2-of-14 from the 3-point line for the contest. That included coming up empty late when the game was still within striking distance.

“You look at it, we were really close there, (trailing by) six or seven points,” Morris said. “You make one of those 3’s, now you’re right back to a one-possession game. We just couldn’t knock down those shots.”

Despite the loss, the season will hold a special place for those on the Dragons’ roster, especially the seniors.

“There’s too many (memories) to count,” said Radaker, who will play at Navy next year. “It’s honestly awesome.”

“Coming two hours,” Radaker said, “you can’t thank them enough. That was amazing. I thought a few people would come out. Maybe 10 or 20, but what happened, that was amazing. I wanted to thank all of them personally.”

Jefferson will lose two senior starters (Radaker and Owen Parker) and its top player off the bench (Daniel Parker) off this finals team to graduation but will return three starters as it moves up to Class AAAA next season.

“We return three starters,” Morris said. “We’re losing one really tall one (Radaker), but replacing the twins (Owen Parker and Daniel Parker) and Jacob (Radaker), and those other guys, their leadership, their hard work, that’s going to be a lot to replace.

“But we had a really good JV team, had an undefeated ninth grade team, so we’ve got people that can step in. I definitely think we’re headed in the right direction and doing the things we want to do.”

Starks, one of the team’s returning starters, predicts a bright future for next year.

“I feel really good,” he said. “We’re going to have a bunch of people coming back … like Kadin Bailey, Jordan Perry, Kam Robinson. There are also some freshmen that are going to be sophomores next year that could step up really big for us. I think next year is going to be just as good. We’re not looking to rebuild. We’re looking to reload.”