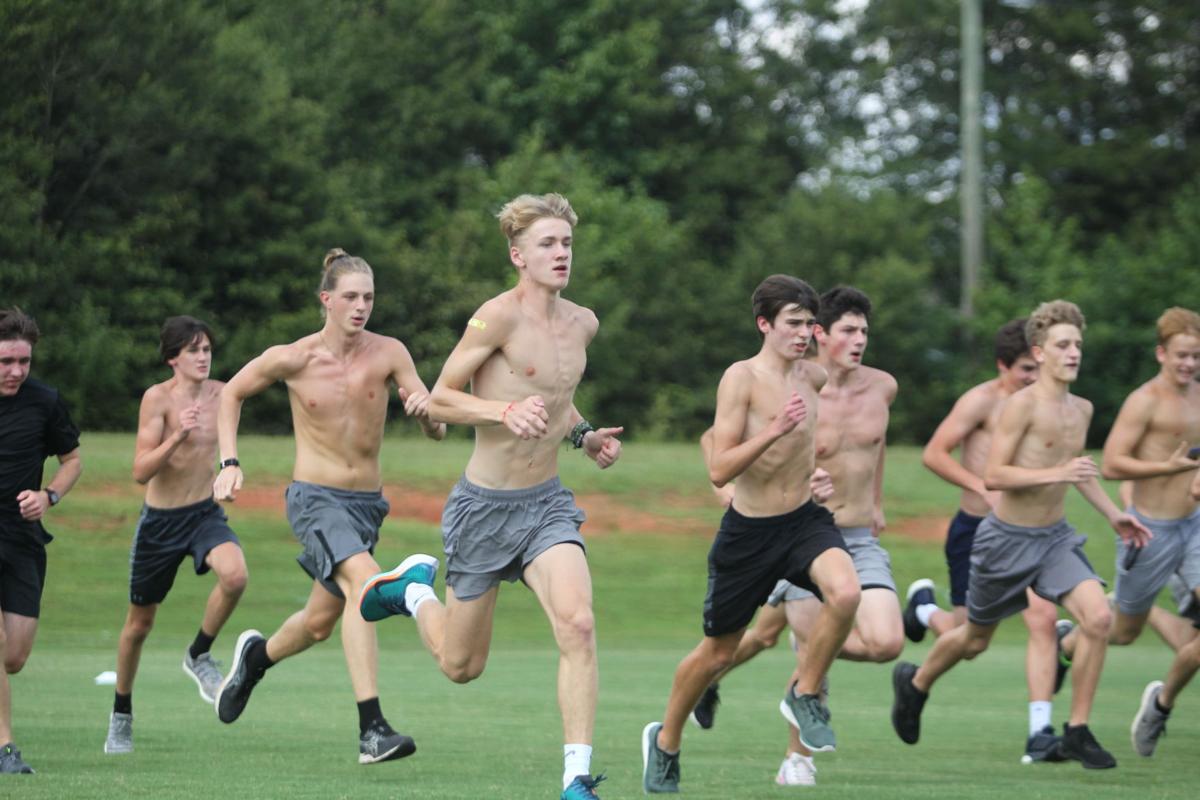 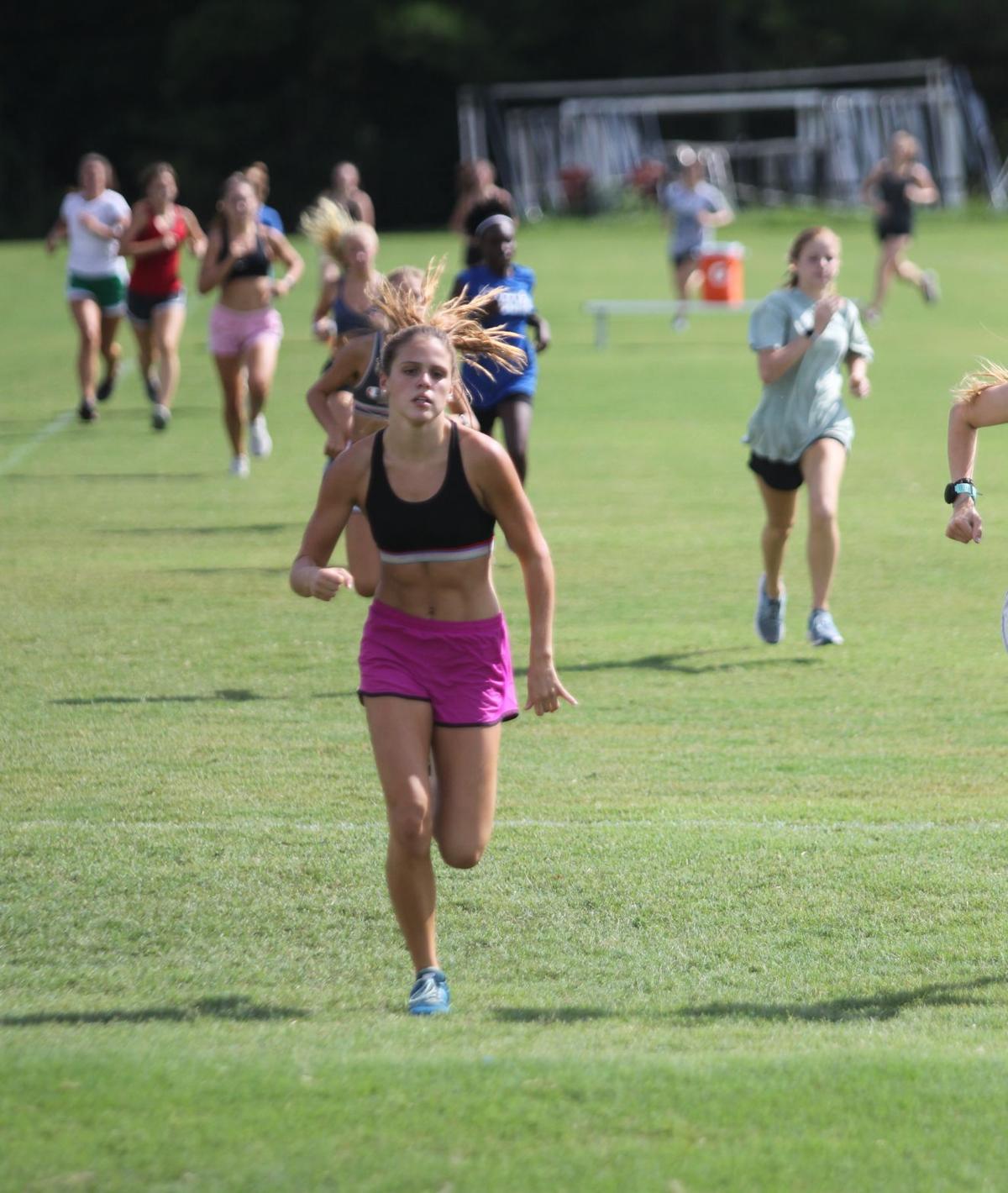 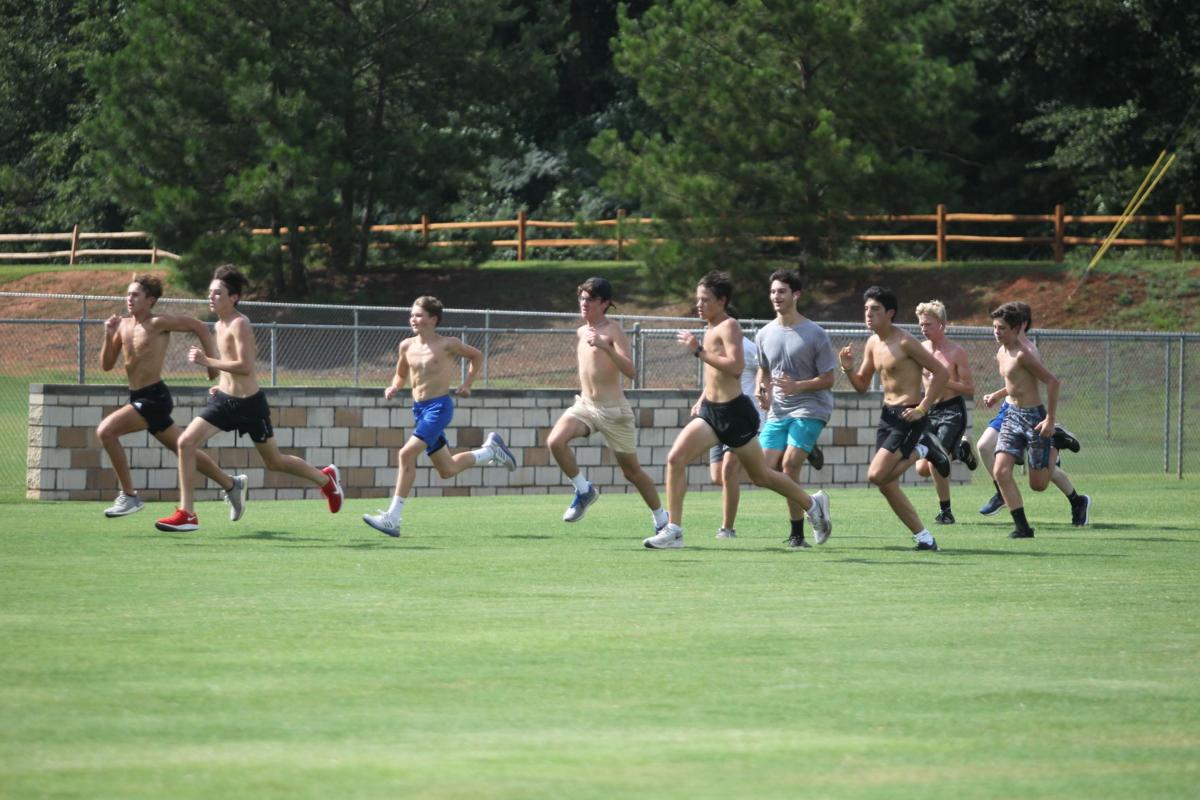 Members of the Jefferson cross country team do repeats during workouts on Aug. 14. 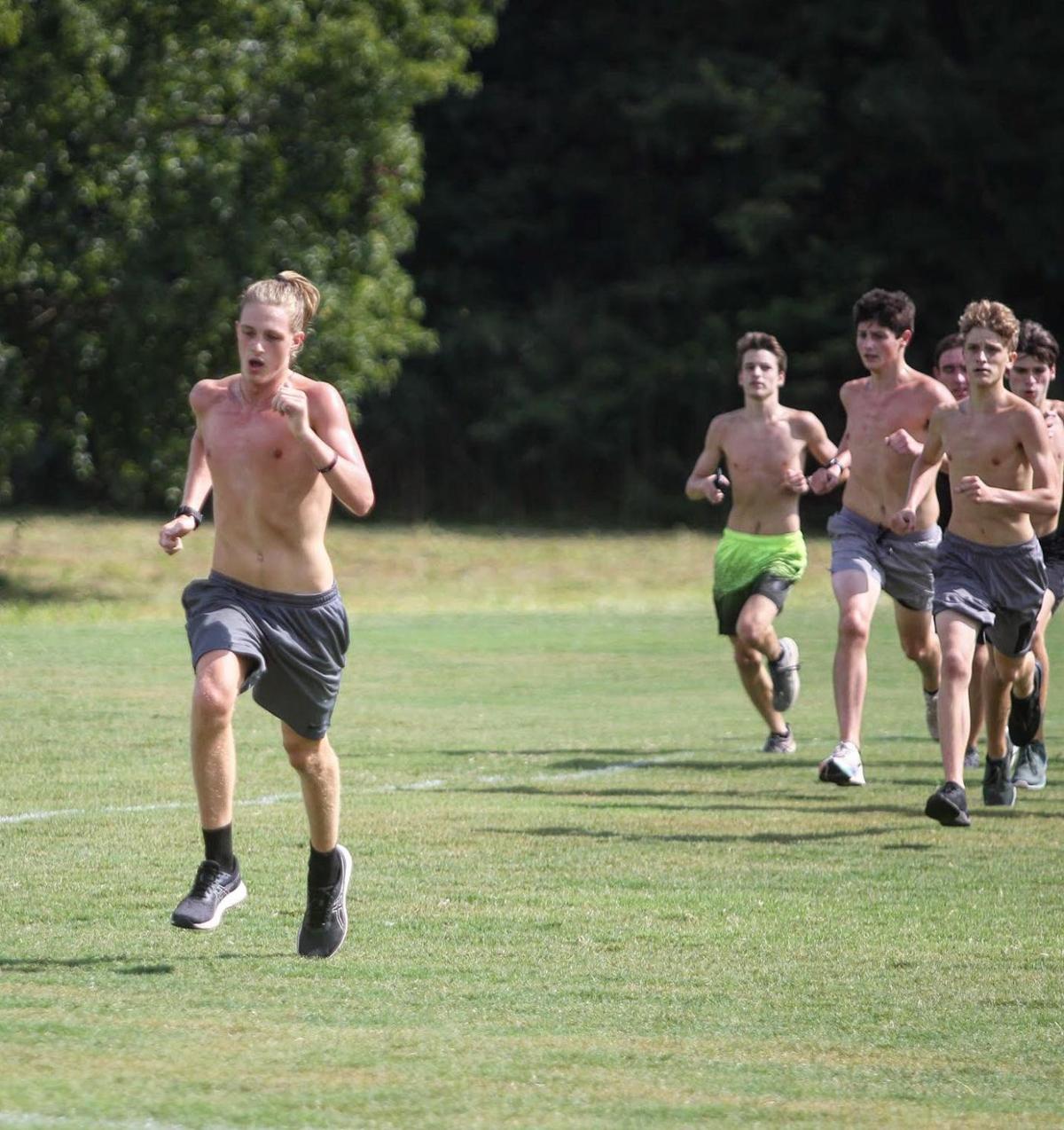 Jefferson's Cooper Gibson is one of the Dragons' top returning runners this year. 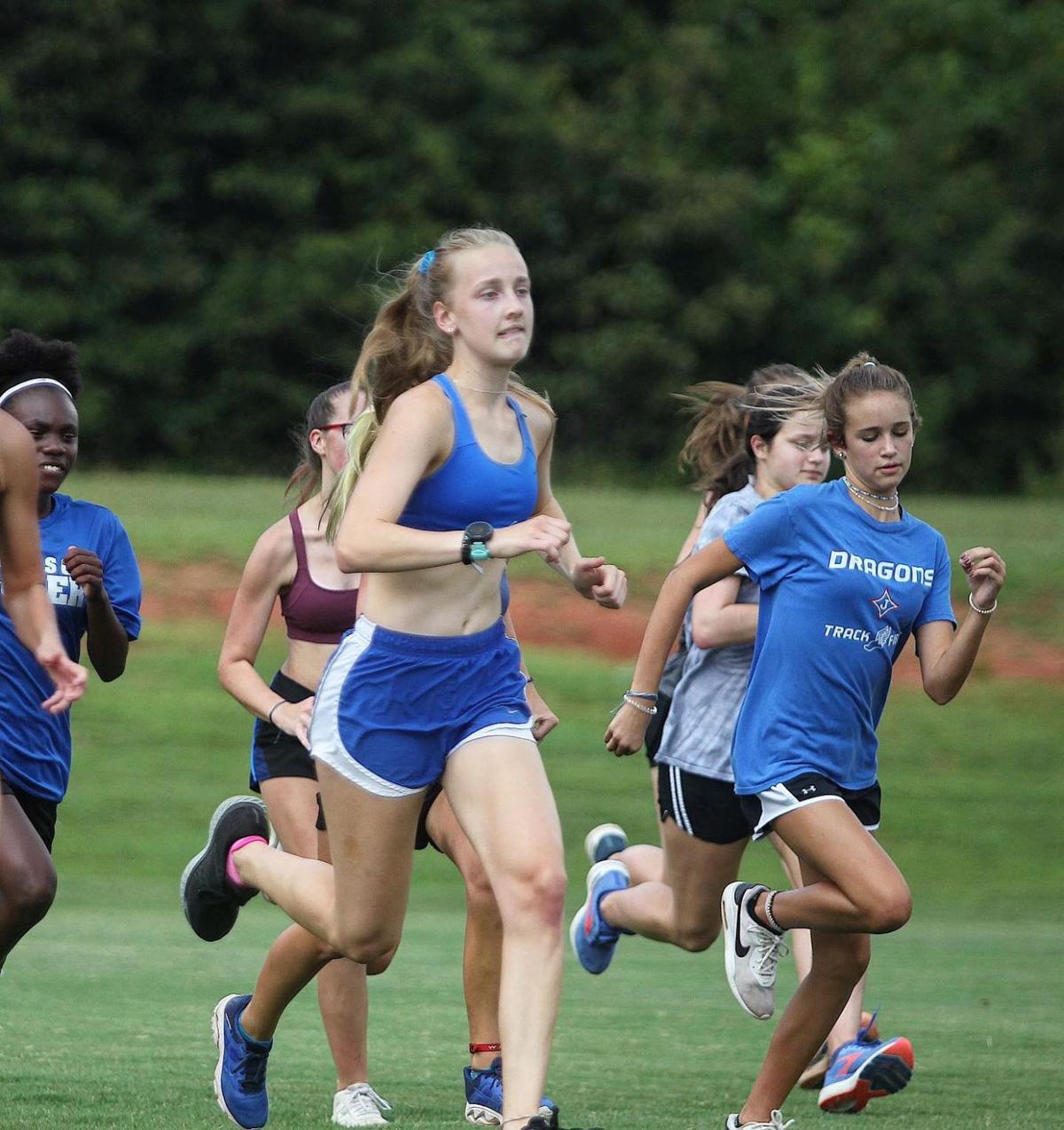 Members of the Jefferson cross country team do repeats during workouts on Aug. 14.

Jefferson's Cooper Gibson is one of the Dragons' top returning runners this year.

The same talented group of runners Jefferson took the state meet last year will return to the starting line this year for the Dragons.

Neither the boys’ and girls’ teams experienced any roster turnover following a pair of top 10 finishes in Class AAA last year as they’ll now look to make noise in Class AAAA.

With Matthew Schroeder leading the boys’ squad and Katherine Law and Catlin Schroeder pacing the girls, both teams hope podium finishes are in store for this year’s state meet under first-year coach Timothy Lees.

Jefferson opens the season Aug. 22 at the Bob Blastow Invitational in Whitesburg.

Here is a look at the Jefferson cross country teams:

•Top newcomers:  The returning cast for Jefferson will be bolstered by rising talent out of the middle school program, which won consecutive state titles in 2018 and 2019 under the direction of Lees. Lees said freshman Ben Davis is showing potential but notes the transition from the middle school two miles to the high school 3.1 miles can be challenging.

•Team strengths:  With so many returning starters, training and practices are very competitive. And with a roster of 38 boys, Jefferson has several contenders looking for a varsity spot.  “The ones looking to move up keep the top runners on their toes and push them to not lose their spot in the top five,” Lees said.

•Region outlook: Jefferson moves into a tough Region 8-AAAA alongside Chestatee and North Oconee. The loss of the spring track season makes it tougher to get a read on how strong those region teams might for the cross country season. But Jefferson certainly knows what it has back, and hopes to be even stronger and perhaps win a region title.

•Season outlook/team goals: Jefferson’s focus is on the state meet, and Lees plans for his team to arrive there healthy, making sure runners aren’t worn down by the training volume as the season progresses. With that mind, the top contenders at the Class AAAA state meet will likely be Marist and 8-AAAA’s North Oconee. “Besides that, you never know what team may come up with a strong group that we weren't expecting,” Lees said. “But with a sixth-place finish out of the boys last year, they are looking to move up and vie for a spot on the podium this year.”

•Top returning runners: Jefferson’s lineup boasts the top-three finishers at last year’s Region 8-AAA meet. The trio is led by Katherine Law, whose career personal-best is 18:36. She won the Region 8-AAA title last year and placed 11th at state. Not far behind Law is Caitlin Schroeder, who finished second in 8-AAA in 2019 and 15th at state. Her career-best time is 19:12. Olivia Kulniszewski placed third at region last year and 28th at state. She owns a personal-best time of 20:06.

•Top newcomers:  Freshman Kiley Powell should contend for one of Jefferson’s top spots, having produced an impressive finish on the region course last year as an eighth grader. Her time was within one second of the Dragons’ No. 3 runner last year, Kulniszewksi.

•Team strengths: Lees said the rest of his lineup is motivated to complement those standouts in the top three. “You need a strong top five to be able to compete at the highest level,” Lees said, “and every lady on our team is stepping up to do that. “

•Region outlook:  Similar to the boys, the top competition in the region looks to be Chestatee and North Oconee.  Despite graduating some runners from last year, North Oconee traditionally fields a strong program with quality coaching, according to Lees. “I suspect that they have been training as hard as we have,” he said. “But, with the set of ladies that we have returning this year, we are looking to take the region come October, and I think we are a top contender to do so.”

•Season outlook/team goals: Jefferson made the podium last year with a fourth-place finish, but seeks more this year. It also looks to prepare its freshmen class of runners for state competition. “The older girls have been doing a great job of mentoring our new runners to ensure the longevity of our program,” Lees said.