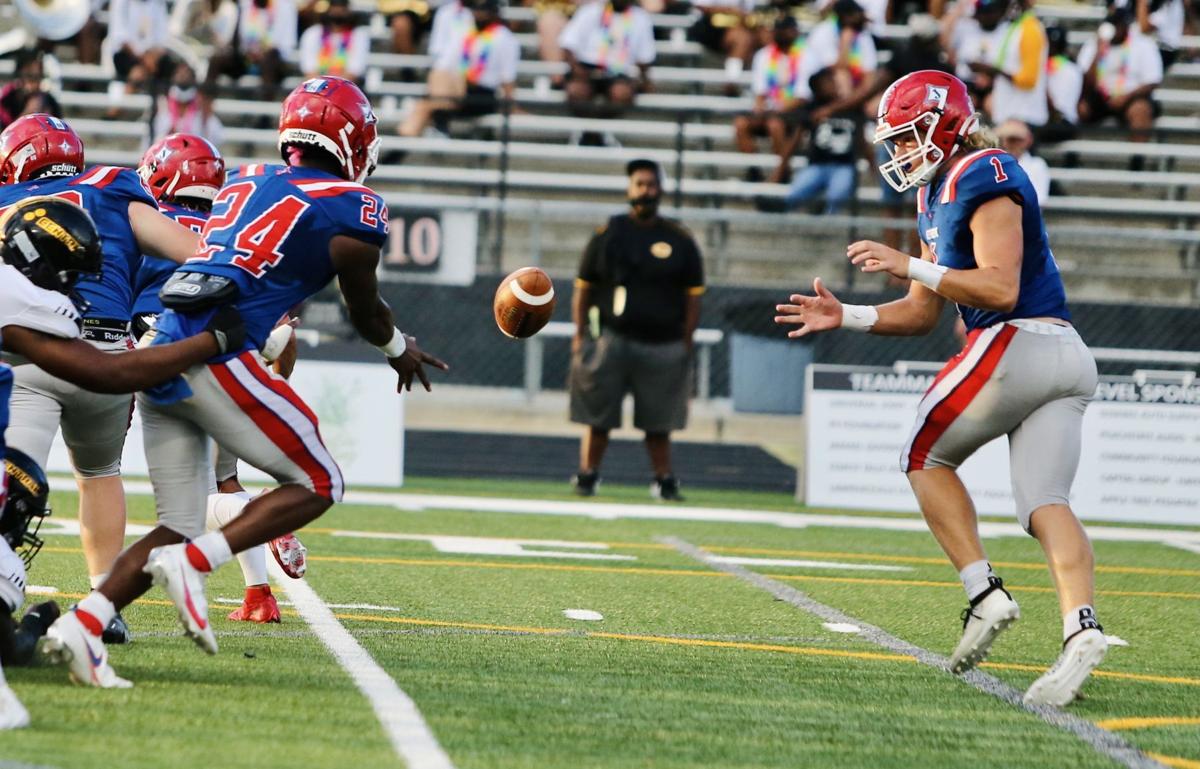 Jefferson's Sammy Brown took a toss sweep 85 yards on the Dragons' first play of the game in a 42-7 road win over Central Gwinnett Friday (Aug. 27) 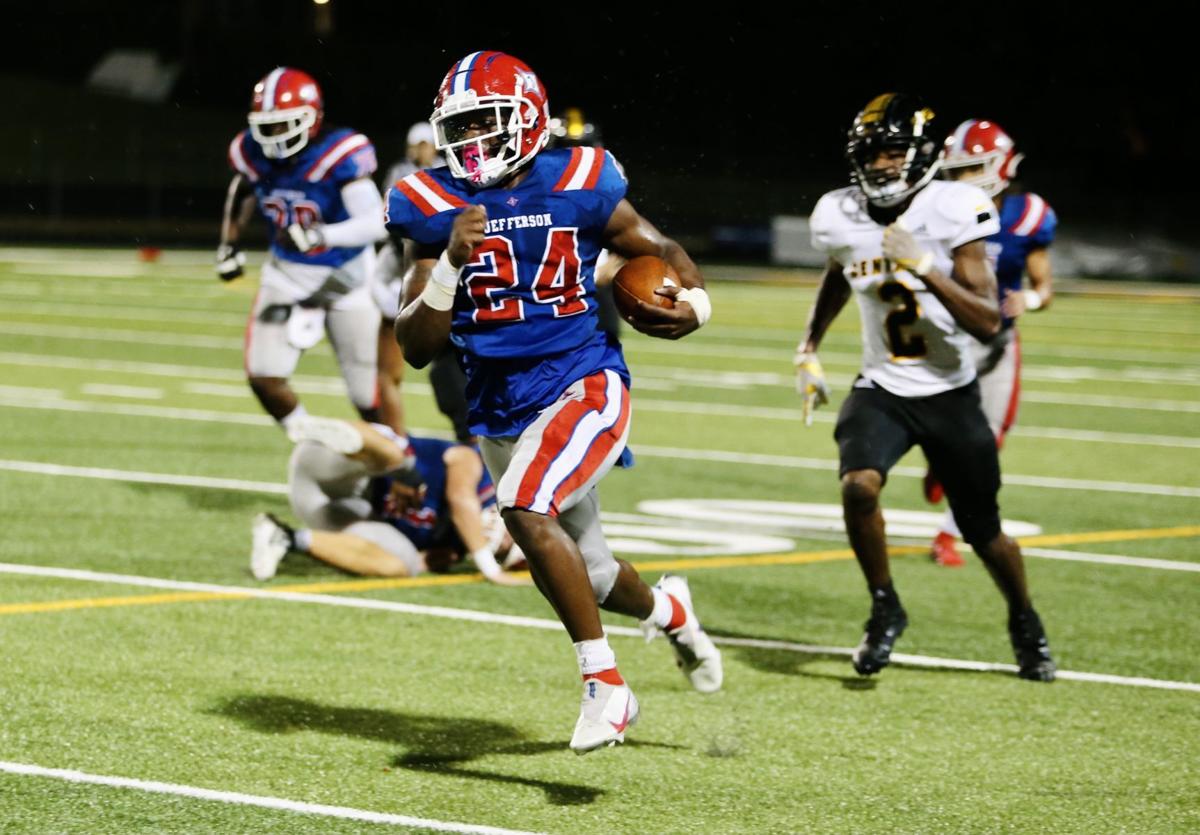 Jefferson's Malaki Starks leaves a Central Gwinnett defender in his wake as he scores on a 54-yard touchdown run Friday (Aug. 27). 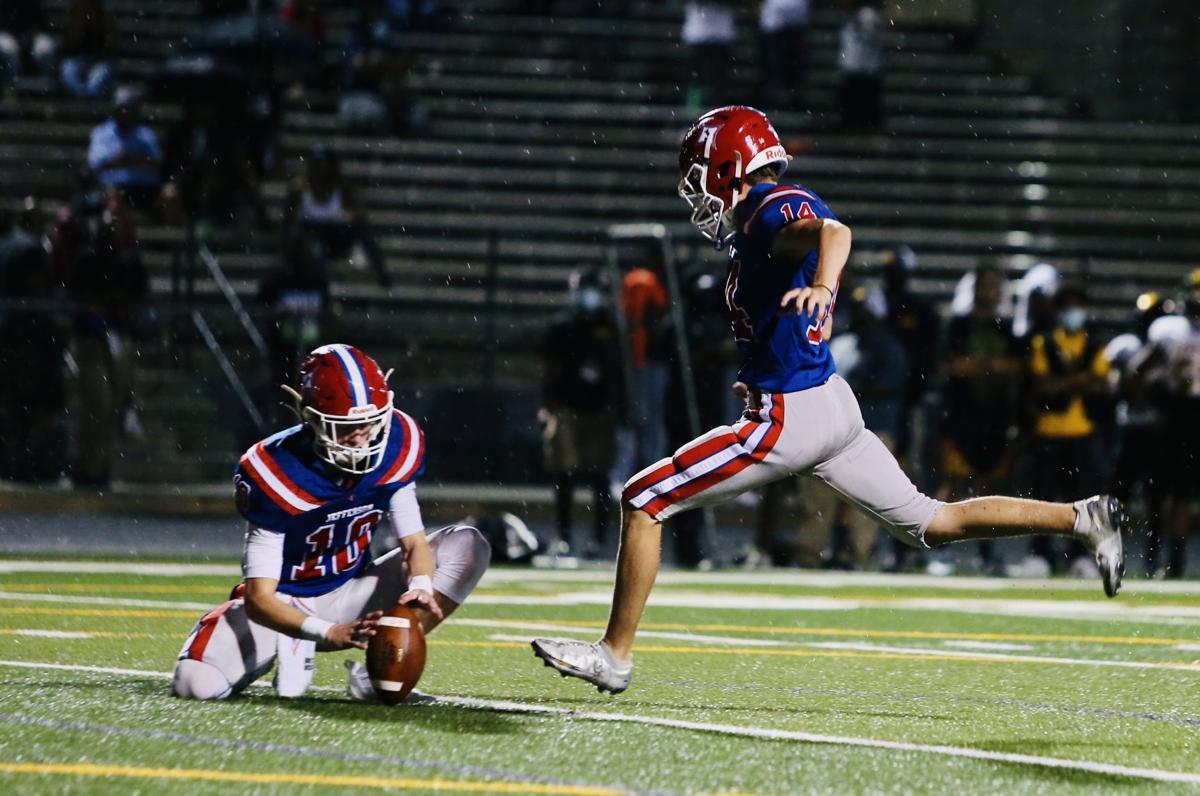 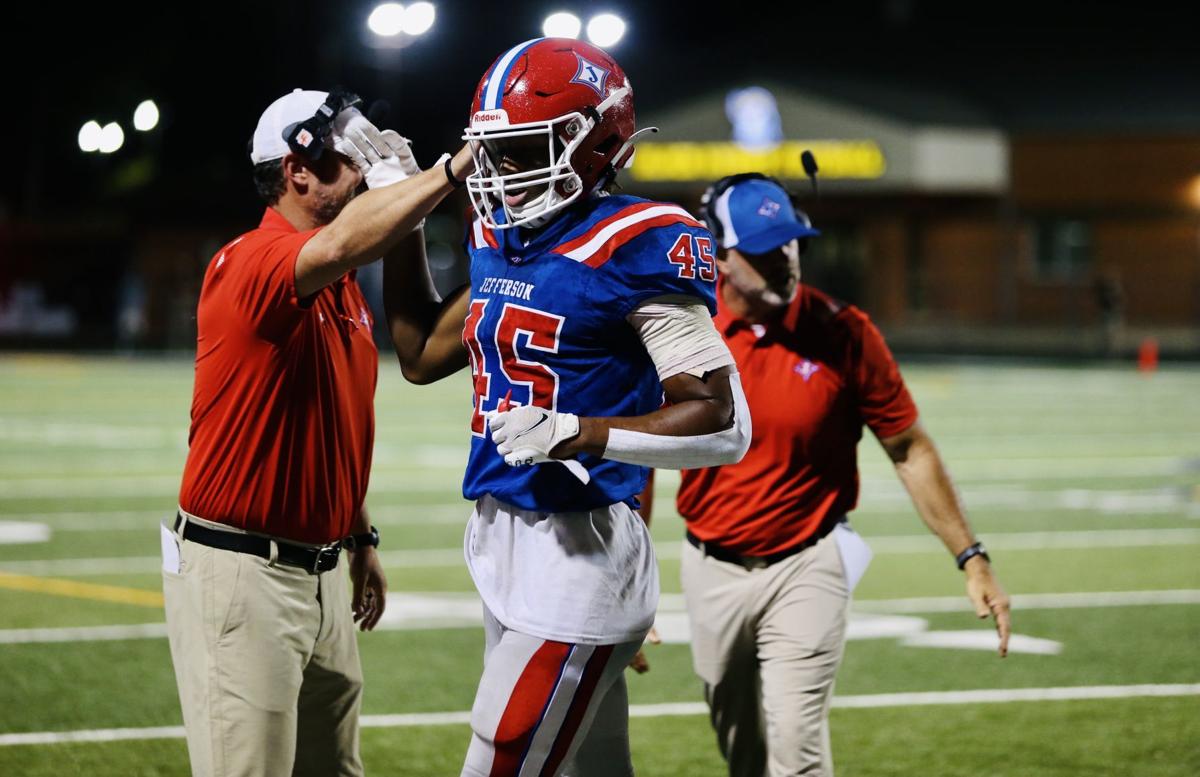 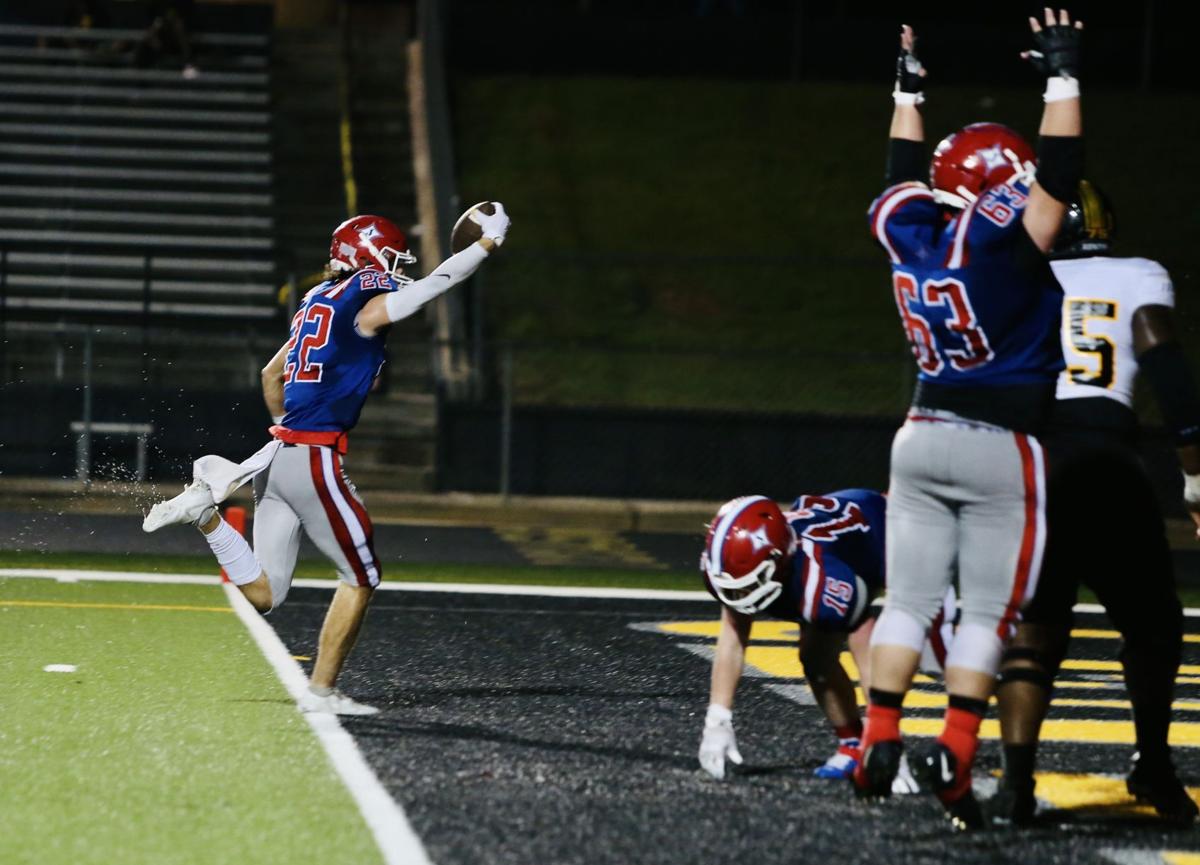 Jefferson's Spencer Neese crosses the goal line on a pick-six which put the Dragons up 35-0 early in the second quarter against Central Gwinnett Friday.

Jefferson's Sammy Brown took a toss sweep 85 yards on the Dragons' first play of the game in a 42-7 road win over Central Gwinnett Friday (Aug. 27)

Jefferson's Malaki Starks leaves a Central Gwinnett defender in his wake as he scores on a 54-yard touchdown run Friday (Aug. 27).

Jefferson's Spencer Neese crosses the goal line on a pick-six which put the Dragons up 35-0 early in the second quarter against Central Gwinnett Friday.

LAWRENCEVILLE — For a second-straight week, weather interrupted a Jefferson football game. That didn't stop the scoring, though.

The Dragons (2-0) went up 7-0 on their first play from scrimmage and struck for four more touchdowns following a lightning delay of over an hour to roll to a 35-0 halftime lead and eventual 42-7 road win over Central Gwinnett (1-1) Friday (Aug. 27).

Jefferson, which has beaten the Class AAAAAAA Black Knights 103-14 over the past two meetings, led by five touchdowns a mere 14 minutes into the game. Four of the Dragons’ first eight offensive plays resulted in scores.

“I was proud of them,” Dragon coach Gene Cathcart said. “They came down here, and that’s an improved football team. (Central Gwinnett coach) Jason (Thompson) is doing an outstanding job. They’re stronger. They’re bigger. They played really well last week … I was proud that we got to play a lot of kids, but not as many as we would like.”

This marked the second-straight game Jefferson has dealt with a lightning delay, and third-straight week that weather has caused a disruption as the Dragons’ Aug. 14 jamboree at Hart County was canceled due to lightning.

“Our kids have handled it well,” Cathcart said. “We were talking the other day; I don’t know if it’s the lightning detectors or global warming or whatever is, I just don’t remember that many (delays) until this late part of (my) career.”

After a lengthy first half due to the weather delay, the second half of Friday’s meeting was played under a running clock with Jefferson leading by 35 points. That limited the Dragons’ opportunities to get every player into the game, Cathcart noted.

“The running clock deal is a great thing to prevent people from running up the score, but it’s also an awful thing in that it takes reps from your backups,” said Cathcart, who estimated his team played only 11-13 snaps on defense in the second half.

But the duo delivered maximum results on those touches.

Brown ripped off an 85-yard touchdown run on the Dragons’ first offensive play, after which lightning sent both teams to the locker rooms. The lightning eventually stopped, but Brown stuck again, racing in from 35 yards out to extend the Jefferson lead to 14-0 at the 6:51 mark in the first quarter.

Brown finished with 120 yards on his two carries.

Starks later scored on a 54-yard option keeper — his only carry of the night — to push the lead to 21-0 and then gave way to backup quarterback Max Aldridge before the end of the first quarter.

Kadin Bailey added a 33-yard touchdown run at the start of the second quarter, and Spencer Neese intercepted a pass deep in Central Gwinnett territory and waltzed in for a 5-yard pick six at the 9:59 mark to push the lead to 35-0 in the second period.

Four fumbles in the Dragons’ final five possessions kept the game from being more lopsided than the eventual 35-point margin.

“I’m a little disappointed in the ball security in the second half,” Cathcart said. “I don’t think we did a great job taking care of the football, but we got some great film to kind of teach some of those younger guys.

“For the most part, we still moved the ball very well in the second half. We just didn’t do a great job taking care of it.”

Zay Minish provided Jefferson’s final score, carrying defenders into the end zone on a 15-yard touchdown run on the first play of the fourth quarter. Jefferson finished with 338 yards rushing on 32 attempts.

Central Gwinnett’s Jason Jackson was bottled up nearly all night after a 206-yard effort last week, but took a screen pass 44 yards for a touchdown in the final minutes of the game.

“Other than the long screen pass at the end, I was really pleased that we limited their big plays, as athletic as they are,” Cathcart said.

Jefferson moves on to a home game against out-of-state foe Southside (S.C.) next week. The Dragons hope the third time is the charm as the past two meetings with the Tigers have been canceled.

“We’ve tried to get this game in for three years now, so hopefully we’ll finally get this one pulled off,” Cathcart said. “It will be good to be back at home.”