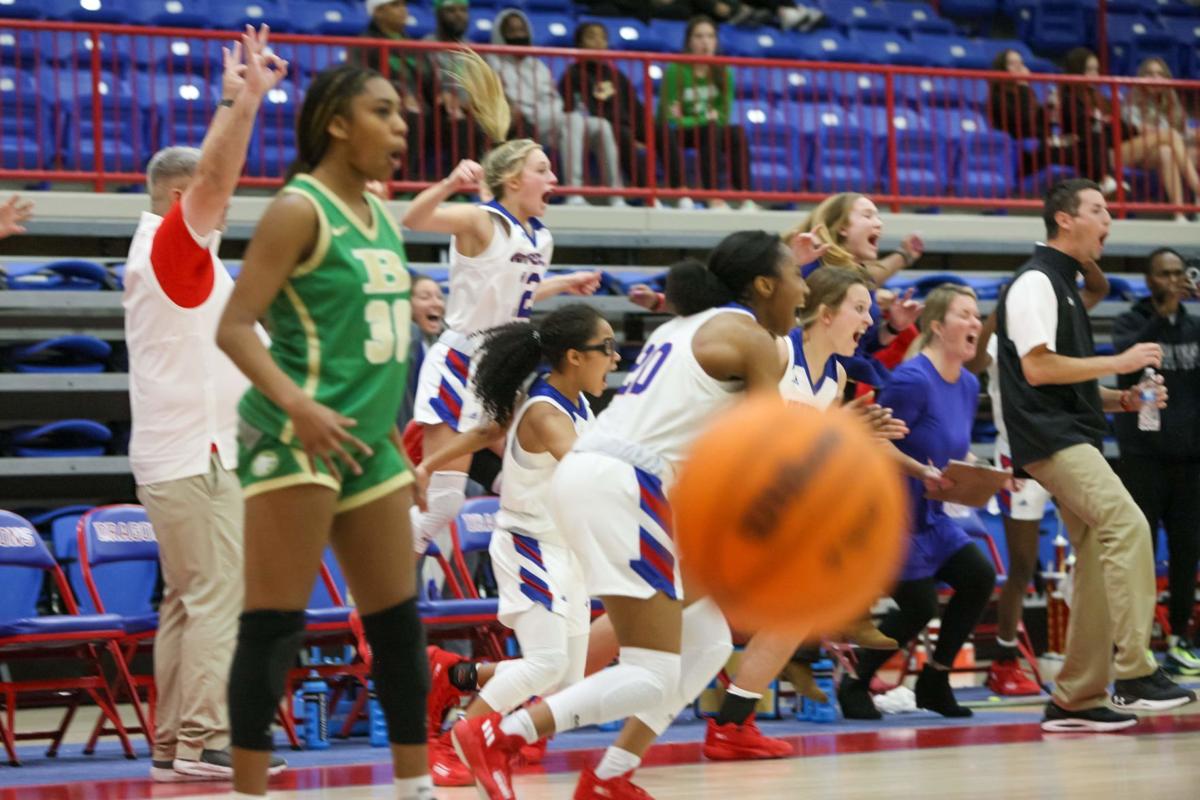 The Jefferson bench erupts after Natalia Bolden drained a three-point shot at the buzzer Tuesday (Nov. 23) to lift Jefferson over Buford in the Jackson EMC Tip-Off Classic championship game. 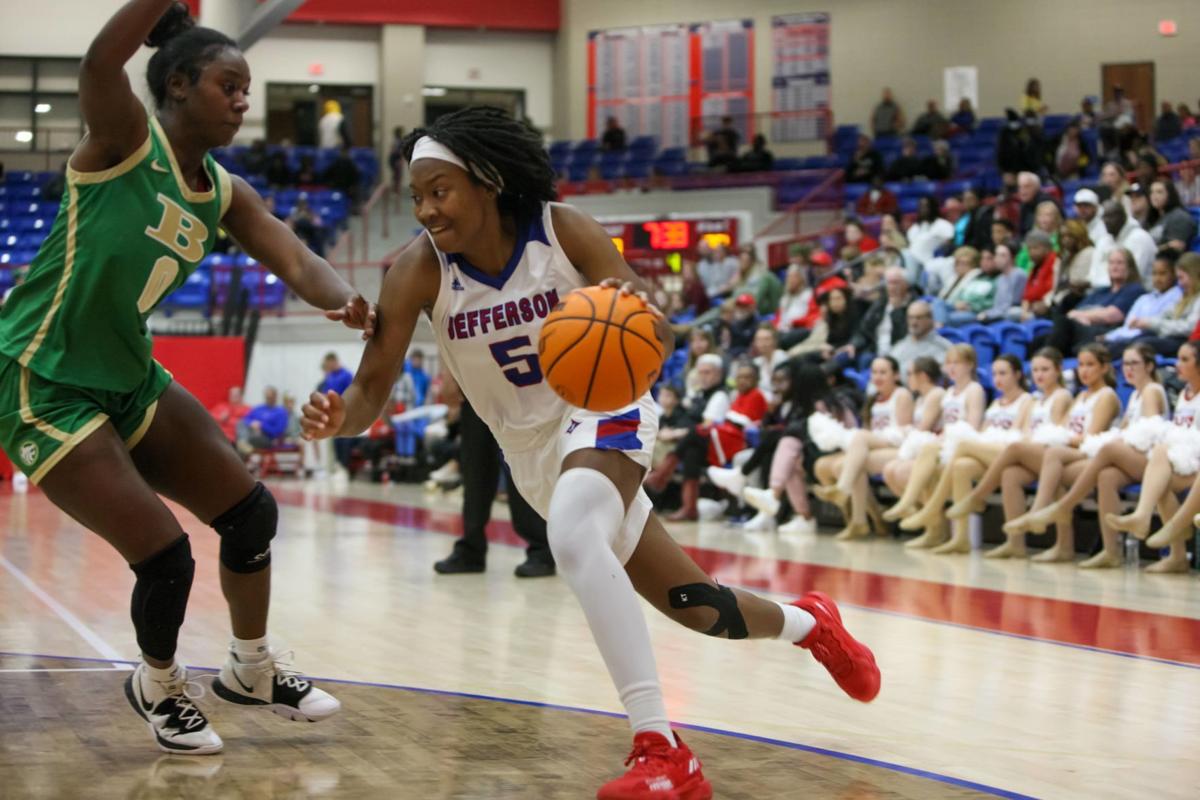 The Jefferson bench erupts after Natalia Bolden drained a three-point shot at the buzzer Tuesday (Nov. 23) to lift Jefferson over Buford in the Jackson EMC Tip-Off Classic championship game.

JEFFERSON – Eight seconds is all Jefferson needed Tuesday (Nov. 23) to upset AAAAAA powerhouse Buford in the finals of the Jackson EMC Tip-Off Classic.

Tied 51-51, head coach Greg Brown burned a timeout and devised a plan to get the ball in the hands of Natalia Bolden, a senior who watched the last two seasons on the sidelines as a victim of two season-ending injuries. What followed didn’t go according to plan, but Bolden did wind up with the ball as time ran out. She had space, took the shot, and drained it to lift the Dragons over Buford 54-51.

“The play didn’t go as we wanted it to go,” Brown said. “But, it got in the person’s hands that we wanted it to be in. I knew when we got it there, [Bolden] had a little bit of a mismatch. I thought she might go to the rim, but as soon as I saw her create that space, saw her take that step back, I thought ‘that’s got a chance.’ The rest took care of itself.

“We’re talking about a kid who hasn’t played in two years. Hasn’t played since her freshman year due to horrific injuries. I couldn’t be happier because she has not left our program, not one second. She’s been our biggest cheerleader on the bench for two years. She deserved that moment. She earned that moment. I was happy for her and her teammates to get to experience that together. That’s something they’ll never forget.”

Even minutes after the game, Bolden was still stunned by what she had done on the court. She finished the game with 17 points, but none were bigger than the last three.

“It feels so surreal,” Bolden said. “I was out for two years, no one knew if I could come back. I proved it to myself and to the fans. It feels good beating Buford especially.

“I feel like I’m still in a dream. This feels so unreal. When it left my hand, I saw it going through the net. I just knew it was going in and I saw my teammates coming over me. It’s more than amazing.”

Bolden had the buzzer-beater three-pointer, but it was Ellie Kinlaw’s sharpshooting that defined much of Jefferson’s (4-0, 0-0 Region 8-AAAA) performance. She scored 27 points, 25 coming from three-point range.

She started off hot, draining a three-pointer with Jefferson trailing 3-0 in the first minutes to tie the game 3-3. She drained another on Jefferson’s next possession to give the Dragons a 6-3 lead. Bolden followed with a layup to extend the lead to 8-3, Jefferson’s largest of the night.

“Ellie Kinlaw had a great game tonight and a great tournament,” Brown said. “She hit some big shots. We were trying to go to Ellie late. Her teammates did a great job of finding her and getting her open. Ellie had a great game, and [Buford was] over her the whole game.”

Buford regained the lead minutes later, but Bolden’s first three-pointer of the game gave Jefferson an 11-10 lead momentarily. Buford (2-1, 0-0 Region 8-AAAAAA) quickly regained the lead and wouldn’t relinquish it until the fourth quarter.

Actually, in the second quarter, the Wolves almost ran away with the lead, claiming a 30-20 advantage moments before halftime. However, a lone free throw by Tylia Brown and another three-pointer by Bolden helped Jefferson close the gap to 32-24 at the break.

The game changed dramatically in the second half. Bolden hit a layup coming out of the locker room and the Dragons went on to outscore the Wolves 14-6 in the third quarter. A three-pointer by Kinlaw and a pair of free throws by Jyesha Butts late in the quarter tied the game at 38-38 going into the fourth quarter.

Bolden knocked down a free throw early in the fourth and Kinlaw knocked down another three-pointer to put Jefferson ahead 42-38. The rest of the quarter was back-and-forth until Buford drained a pair of foul shots to tie the game 51-51 with around 15 seconds left in regulation.

Jefferson dribbled the ball down the court for Brown to call a timeout with 8.7 seconds left on the clock. That’s where he schemed a play for Bolden to shoot the game-winning shot. Her clutch three-pointer at the buzzer put the Dragons on top 54-51.

“We could have laid down,” Brown said. “It was 30-20 at one point, we just didn’t quit. We fought and fought. I don’t know, I’m a little speechless. You win one like that against arguably the most storied program in the history of Georgia high school girls basketball. It’s a big deal. It’s a big step for our program.

“I took this job in mind that I wanted to go to a program that had the ability to compete with the Buford’s in the state of Georgia,” he said. “We have not run from them. We’ve played them every year since I’ve been here. We hadn’t gotten them yet until tonight. [Buford] set the standard across the state. We don’t do things exactly the way they do, but we do it our way. Tonight, our way was good enough.”

Jefferson returns to action on Friday (Nov. 26) against White County. That game will be played at Cherokee Bluff High School.