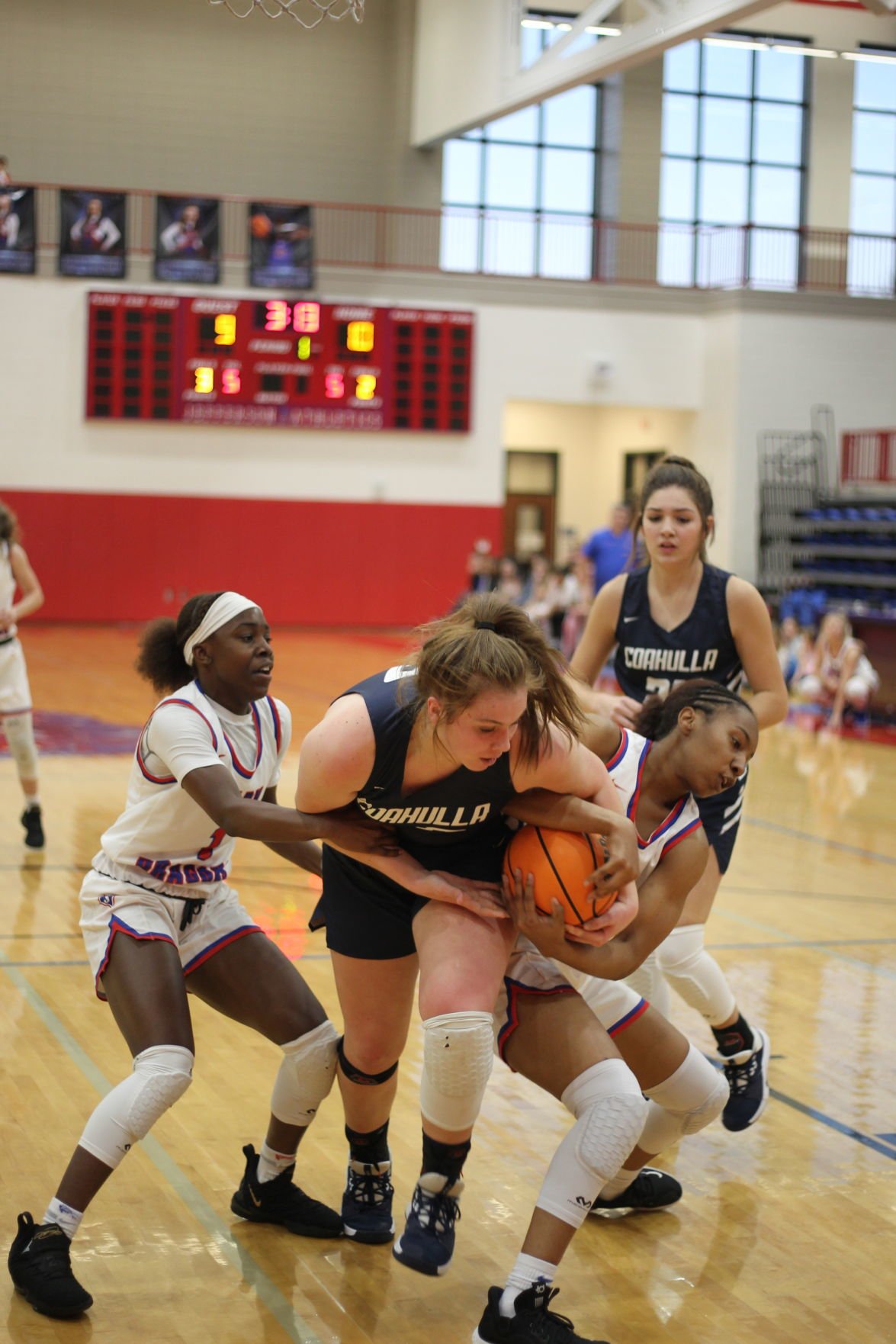 Jyesha Butts (right) battles for the ball as the Jefferson girls' basketball team beat Coahulla Creek 62-55 Friday (Feb. 14) at home in the first round of the state tournament. 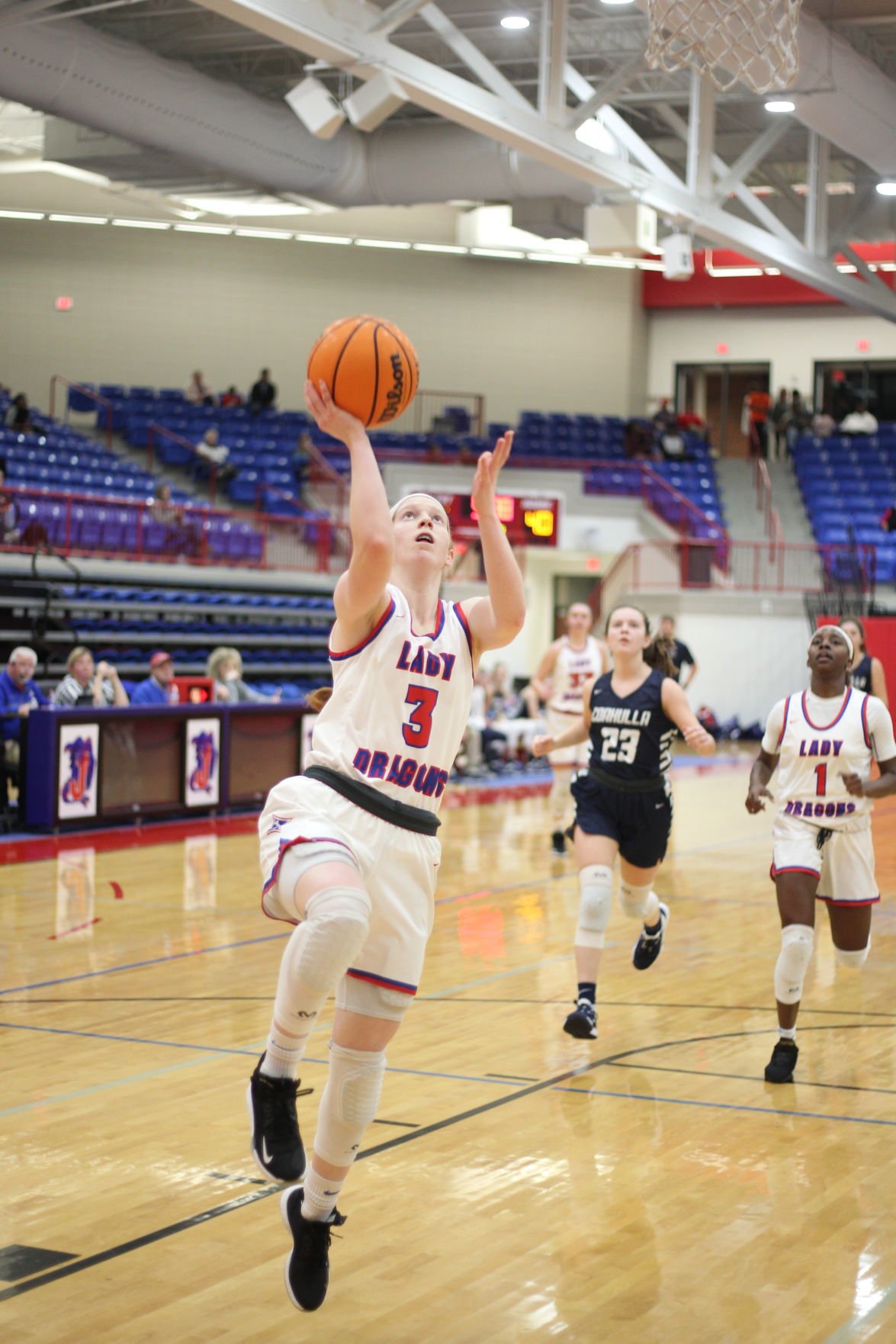 Jefferson's Livi Blackstock scores on a breakaway layup Friday (Feb. 14) against Coahulla Creek. The Dragons beat the Colts 62-55 in the first round of the state tournament to advance to the Sweet 16.

Jyesha Butts (right) battles for the ball as the Jefferson girls' basketball team beat Coahulla Creek 62-55 Friday (Feb. 14) at home in the first round of the state tournament.

Jefferson's Livi Blackstock scores on a breakaway layup Friday (Feb. 14) against Coahulla Creek. The Dragons beat the Colts 62-55 in the first round of the state tournament to advance to the Sweet 16.

The Jefferson girls’ basketball team picked up a seven-point win in the first round of the state tournament, and coach Greg Brown certainly wasn’t complaining.

Still, Jefferson led by double figures late in the game until Coahulla Creek (20-8) knocked down a pair of 3-pointers in the final minute to cut the lead to 60-55. The Dragons had won their last six games by 18 points or more.

“Give our kids credit,” Brown said. “I thought we never panicked, even when they cut it to five there at the end. I still felt really good. We were doing the right things. We had some turnovers. I think you could tell we hadn’t been in a game like that in while, to be honest with you. So, it was good for us.”

Livi Blackstock and Deshona Gaither each scored 17 points in the Dragons’ 11th win in 12 games. Courtney Kidd added 13 points. Blackstock sustained a leg injury late in what was a physical game, but Brown believes it wasn’t serious.

Jefferson shot 17-of-22 from the free-throw line in the win. Blackstock was a perfect 7-of-7.

“I thought that we just turned it up,” Brown said. “We kind of got going a little bit on offense. I thought we were more aggressive, got to the rim, got some stops on defense. That proves to be the difference in the game is that run there early in the third."

The Dragons led 49-36 after three quarters before the Colts whittled the lead down to 49-41 with 7:13 left in the game after a 3-pointer from Jillian Poe. Coahulla Creek finished with 10 3-pointers on the night.

“I don’t know that we’ve given up 10 3’s all year,” Brown said. “Give them credit, and I think that’s what kept them in the game, obviously with how well they shot it.”

A long 2-pointer from Blackstock and a 3-pointer from Ellie Kinlaw, however, pushed the lead out to 54-41, and the Dragons enjoyed a double-digit lead until the final minute of the game.

“Again, you have to give our kids credit,” Brown said. “We shot the ball really well from the free-throw line … and we got stops when we needed to. This is not supposed to be easy. We win by 30 and everybody thinks we’re supposed to win every game by 30. It doesn’t work that way. Sometimes you’ve got to grind one out.”

Jefferson will host Pierce County Wednesday (Feb. 19) at 5:30 p.m. in the Sweet 16 round of the state tournament as the Dragons will try to advance to the Elite Eight for a fourth-straight season.

“I’m just thankful it’s at home,” Brown said. “That’s what we did not have last year. That’s where the region championship pays off. You secure that game being at home … I think our kids will be ready. It’s a matter of getting our legs back under us and making sure we’re ready to play.”

Against Pierce County, Jefferson will run into a 23-win team that took the No. 2 seed in out of Region 2-AAA, though it finished the regular season in first-place. The Bears lost to Tatnall County in the 2-AAA tournament finals.

"They have strong guard play and a couple of very athletic post players," coach Greg Brown said. "We are going to have to do a really good job of trying to pressure them into some early mistakes and do a great job rebounding the basketball.

"Luckily, they have to make the long trip up here and we hope to have a great crowd to create a big home court advantage."

The winner of this game advances to the Elite Eight to face the winner of Monroe-Albany and Greater Atlanta Christian.