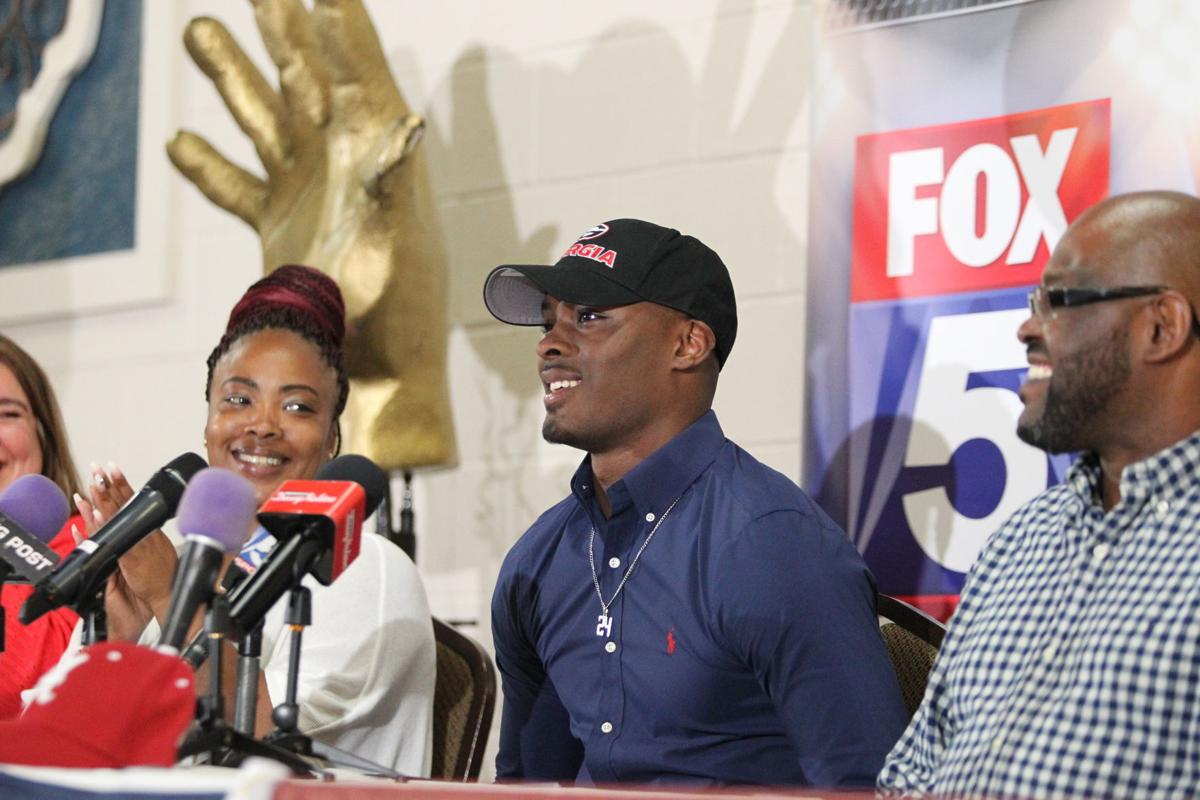 Jefferson's Malaki Starks, a five-star recruit, has chosen to play college football for the University of Georgia. 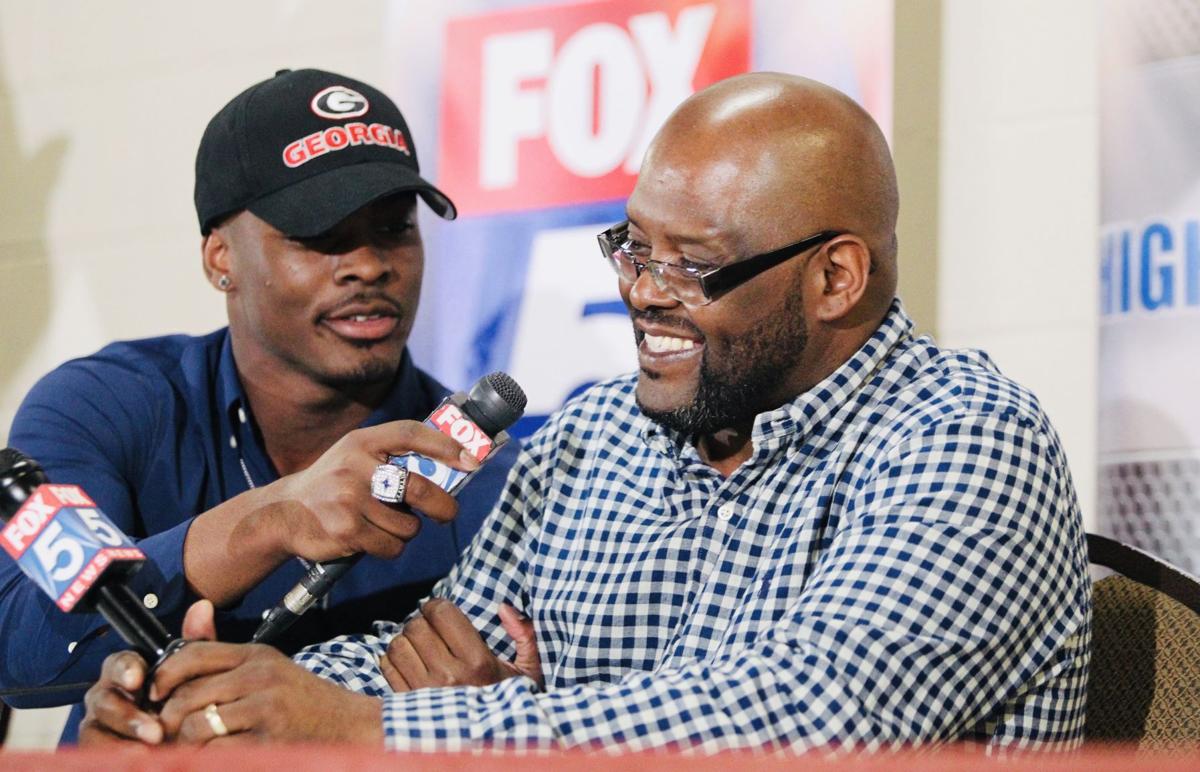 Malaki Starks' father, Larry, smiles while those on hand at Starks' commitment ceremony sing happy birthday to him. Starks picked this commitment day to coincide with his father's birthday.

Jefferson's Malaki Starks, a five-star recruit, has chosen to play college football for the University of Georgia.

Malaki Starks' father, Larry, smiles while those on hand at Starks' commitment ceremony sing happy birthday to him. Starks picked this commitment day to coincide with his father's birthday.

Malaki Starks reached to his right and picked up a red and black cap, ending months of speculation over where the talented, multi-purpose player would choose to play college football.

Starks, a five-star athlete from Jefferson coveted by virtually every power program in the nation, committed to the University of Georgia during a Thursday ceremony.

Making the decision now and focusing on his upcoming senior season at Jefferson — a program coming off of a state finals appearance — was important to Starks.

"It means a lot," said Starks, who ranks as the No. 29 player in the country and the nation's No. 4-rated athlete, according to 247sports.com. "Senior season is something that a lot of people take for granted sometimes, and you've got to take advantage of every second you get."

Jefferson coach Gene Cathcart was happy for his star player.

“What a neat night,” Cathcart said. “Ultimately, you just want him to make the decision that he’s going to be happy with, that (parents) Larry and Tish are going to be happy with. There wasn’t a bad choice on the table. Now, the beauty of this is we get to focus on 12th grade before we worry about 13th, 14th and 15th grades.”

Cathcart said he received a combined 247 calls and texts on Starks’ decision day, a total he said “may be an intergalactic record.” He joked that Starks “helped him out” during the day at school by wearing a neutral pink hoodie. Cathcart said he's regularly fielded questions about which college’s apparel Starks wears each day from those trying to gain insight about his decision.

“I kind of feel like a Hollywood reporter covering the red carpet: ‘What is he wearing today?’” Catchcart quipped. “But they’ve handled it so beautifully through this whole process, their family … Malaki is such a great person to talk to. He is a pleaser, and it was hard for him to call and tell folks that he wasn’t coming, especially folks that had spent time away from their family recruiting him and had invested in him.”

Starks announced his decision in front of a packed house of teammates, community members and well-wishers at a ceremony at the Jefferson Civic Center. A raucous cheer went up from what was a highly pro-Bulldog crowd when Starks — after a pause — plucked the Georgia hat off the table, choosing the Bulldogs over Clemson and Alabama.

Starks said the decision came down Georgia and Clemson, and it wasn't an easy one.

“It was tough,” Starks said in an interview. “Clemson would have been good to me. I felt like I could fit in and I could do great.”

Starks, who has been fairly quiet about his recruitment despite his elite status as a five-star prospect, said he made the decision about two weeks ago to stay close to home and play for Kirby Smart and Georgia.

Starks said he didn't feel affected by any pressure during the decision-making process, though he said many people throughout Jefferson hoped he'd select the nearby Bulldogs.

"I don't really feel pressure like that," he said. "But living in a community that's basically a Georgia community, I heard a lot of Georgia."

Starks picked his decision day to coincide with his father, Larry's, birthday. Playing close to home — Sanford Stadium is 19.7 miles from Jefferson Memorial Stadium — and to his family was a big draw for Starks.

Cathcart said he thought the opportunity for Starks to stay nearby would be a strong factor in his decision. He also said Georgia did an admirable job of handing Starks’ recruitment in the midst of a position coaching change at defensive back when Charlton Warren left for Indiana in January.

“Because that can be a difficult thing,” Cathcart said. “He knows he’s not going just for Sanford Stadium or the arch or any of those landmarks or buildings. He’s going to invest in the people and the people invest in him. So, coaches are so important in that regard. They did a beautiful job of being up front and communicating in the position coach change, and coach (Kirby) Smart did a really great job of handing that.”

The Bulldogs stand to get a player who is a standout safety and one who rushed for 1,537 yards and 24 touchdowns as a quarterback during a 14-1 run for the Dragons that ended in the state finals against Marist.

Starks said he expects to play safety for Georgia, but also mentioned seeing some time offensively at running back.

Starks still has his senior season ahead of him which begins Aug. 20 when Jefferson takes on Rabun County and fellow five-star prospect Gunner Stockton, who is a Georgia commit, in a game likely to draw national attention.

Now that he's committed, he told the crowd at the ceremony that he's looking forward to playing alongside his long-time teammates and pursuing a state title.

"Being able to play that last year with them and go chase another ring, that means the world to me," Starks said.