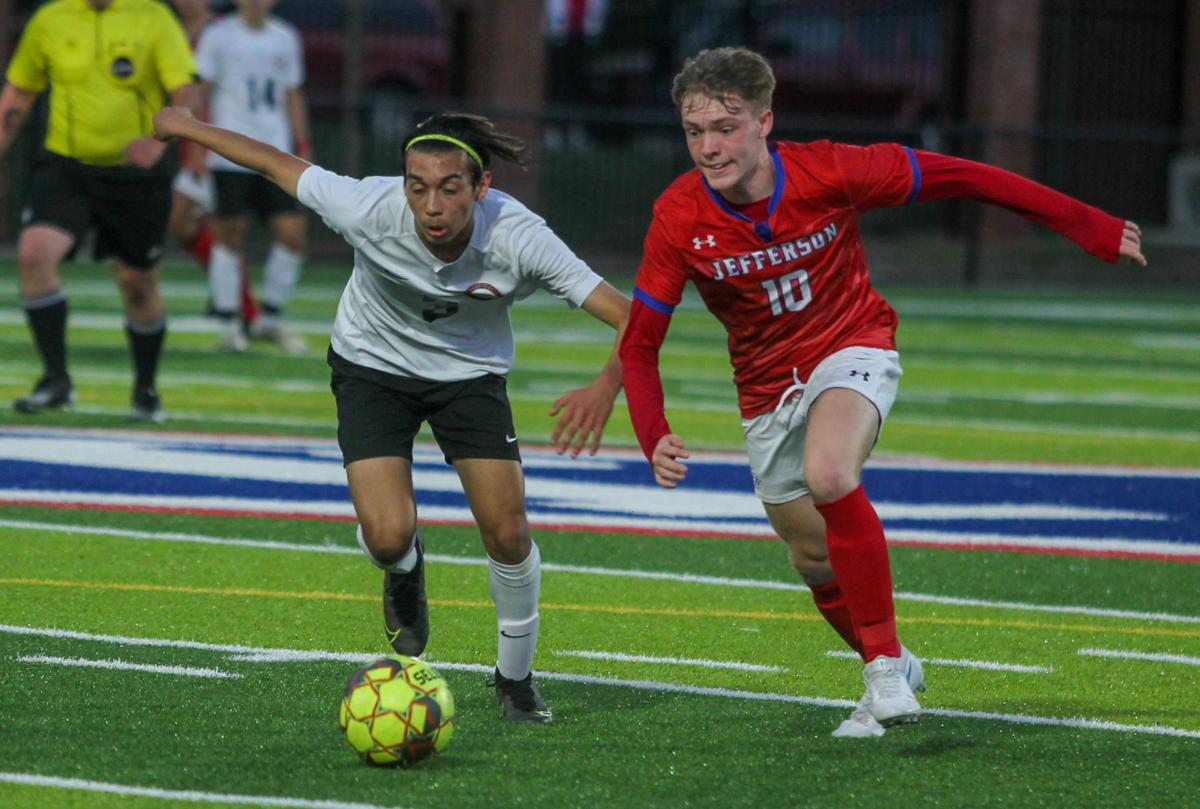 Jefferson's Mason Fifer tangles with a Flowery Branch player in the Dragons' 4-3 loss in a top-10 matchup Monday (March 29) in region play. 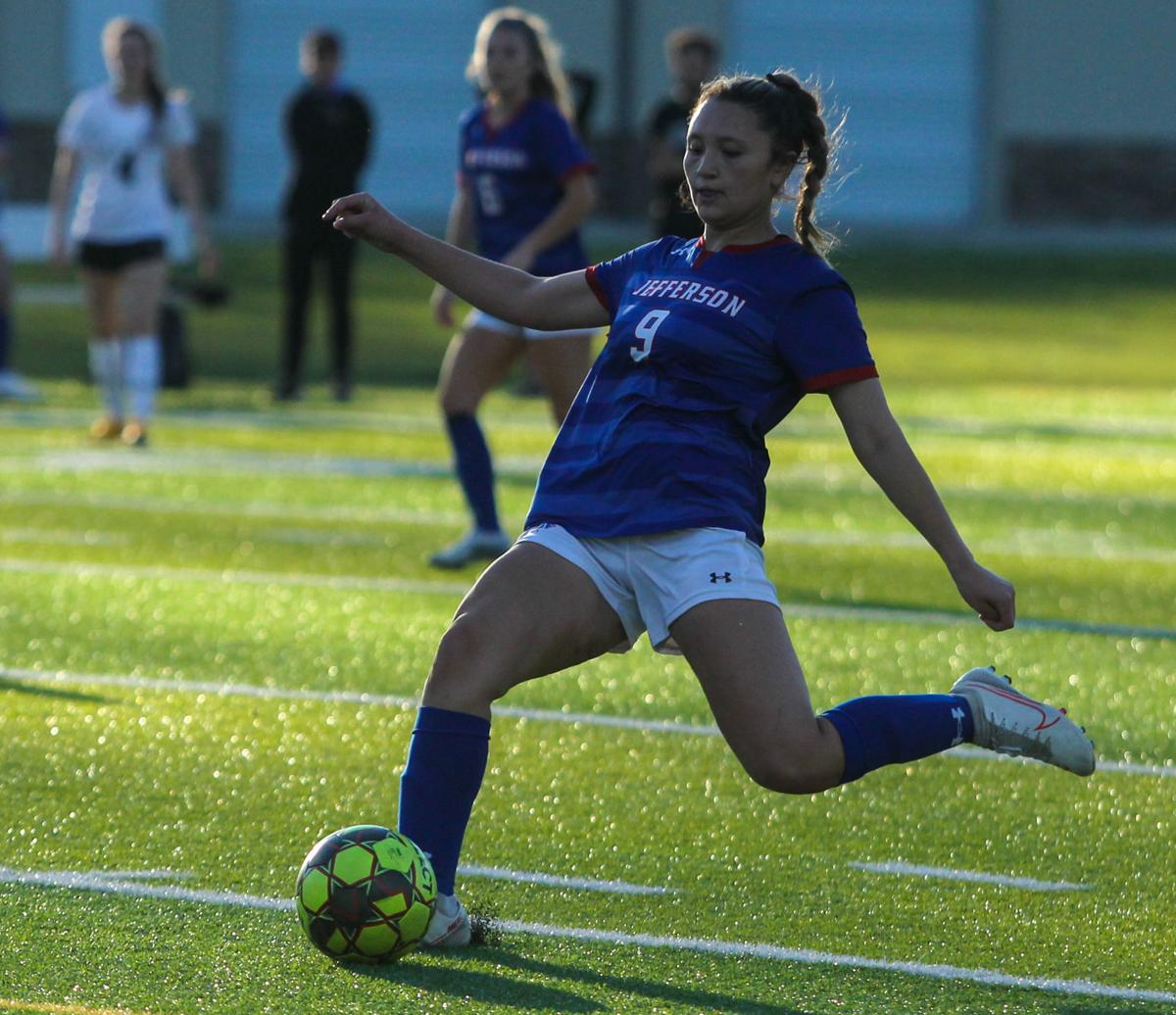 Jefferson's Mason Fifer tangles with a Flowery Branch player in the Dragons' 4-3 loss in a top-10 matchup Monday (March 29) in region play.

Both games lived up to the billing, but the Dragons couldn’t achieve a victory in either game. The girls lost 3-2 after overcoming a 2-0 deficit. The boys’ squad fell 4-3, squandering a 3-2 lead they gained at the 65th minute.

BOYS SQUAD LOSES TO FLOWERY BRANCH AFTER HIGH-SCORING SECOND HALF

Jefferson and Flowery Branch brought the intensity you would expect from a top 10 matchup. The action was physical and the sparse crowd was electric.

The game reached its fever pitch late in the second half when both squads combined to score four goals over the course of five minutes, including three goals in the 66th minute. Before that five-minute fury, Jefferson had a 2-1 advantage. Afterward, Flowery Branch led 4-3 and it held off the Dragons the rest of the way.

The Falcons scored the first goal of the game at the 16th minute via a hard roller just inches beyond goalkeeper Adam Hayes’s hands. Mason Fifer responded at the 37th minute when he was onsides by mere inches, leading to a chip shot past Flowery Branch’s goallkeeper.

Jefferson took its first lead of the game at the 57th minute when Kuta Katompa kicked a hard roller past the goalkeeper. The Dragon’s lead didn’t last long however, as a free-kick from the right of the box set up a goal by the Falcons at the 66th minute.

Seconds later, Cort McCormack found the back of the net with the goalkeeper right in his face. A second Flowery Branch defender behind the keeper was helpless to stop the ball. Jefferson didn’t get to enjoy the 3-2 lead long as Flowery Branch scored a few seconds later to tie the game 3-3. The Falcons scored again at the 71st minute and held on to win 4-3.

DRAGONS UNABLE TO CAPITALIZE ON OPPORTUNITIES IN CLOSE LOSS

The Jefferson girls’ soccer team dominated the time of possession, but Flowery Branch made the most of their few opportunities to defeat the Dragons 3-2.

Despite controlling the ball for most of the game, Jefferson didn’t attempt a clean shot until the 20th minute when Abbey Eison’s try went wide right of the frame. She was even closer to the frame five minutes later. The Dragons continued advancing the ball into the box during the first half, but Flowery Branch managed last-second tackles each time to end Jefferson’s scoring opportunities.

“We missed opportunities,” said head coach Molly McCarty. “We should have capitalized on the five chances that we had right in front of the goal… If we’re going to control possession, we also have to control how we possess the ball. Some of the times we were putting the ball back into the pressure.

“They [Flowery Branch] got tired a little bit, so we’re telling them to switch fields. We would and but we wouldn’t change the mindset to drive at them to stretch them.”

The Falcons finally made Jefferson pay for its missed opportunities at the 39th minute. Maggie Wadsworth stayed onside and beat the Jefferson defense for a one-on-one situation with goalkeeper Julia Brooks. Wadsworth punched in the short goal, her first of three on the night.

Wadsworth added her second goal at the 55th minute to extend Flowery Branch’s lead to 2-0. Jefferson finally responded at the 58th minute when Eison hit a hard shot that careened off the leg of Flowery Branch’s goalkeeper. The ball barely found the bottom of the crossbar and bounced down into the Falcons’ goal.

At the 64th minute, Wadsworth scored what ended up being the decisive goal. This time she outran several Jefferson defenders with the ball until she drew the keeper out of the box for a chip in goal.

Jefferson kept fighting during the final 16 minutes and finally scored at the 71st minute via a header by Savannah Jackson delivered by Eison’s corner kick. However, the Dragons were unable to score an equalizer and fell 3-2 to their Region 8-AAAA rivals.

“We know we’re the no. 3 seed, we know our direction,” McCarty said. “That’s what I told the girls, we know what we’re going to do now. We’ve got playoffs and that’s what we play for.