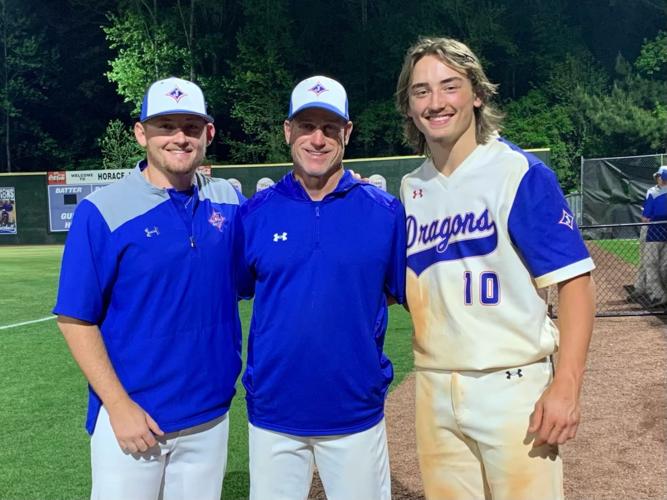 Pictured above is Hulsey with his brother Jared and Coach Knight. 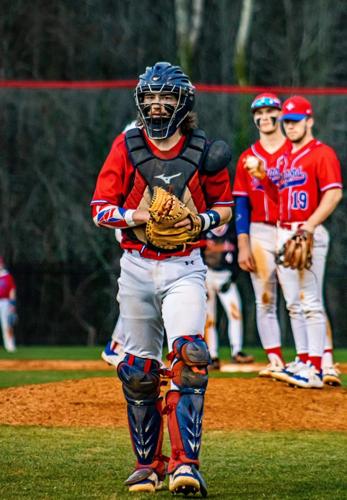 Seen above is Roger Hulsey walking back from the pitchers mound.

Pictured above is Hulsey with his brother Jared and Coach Knight.

Seen above is Roger Hulsey walking back from the pitchers mound.

Roger Hulsey began playing baseball at the young age of four. Hulsey played recreation ball, travel ball and middle school ball. Fast forward to now in his senior year where he is a prominent leader throughout the Jefferson baseball program.

Hulsey was inspired to pick up a bat and ball by his dad and his brother. “My Dad played during high school and got in a wreck his senior year and could not play anymore. My brother also played and since he was playing I thought that is what I needed to do also,” Hulsey said.

When Hulsey was first introduced to baseball he played as an infielder. At the age of 10 he began playing both infield and catcher, then the unthinkable occurred.

“I broke my arm not once, but twice. I was not able to play baseball between the breaks. I was also a pitcher before then, so after the injury I was unable to pitch after that. When I got in high school they made me a catcher and I have not moved positions since,” Hulsey explained.

Luckily Hulsey has been dealt a great hand of cards during his high school career and hasn’t endured any injuries.

Playing for Jefferson High School has been a full circle moment being that his brother Jared is also one of his coaches.

“He’s always been my number one role model. Everything that he's always done, I've always wanted to do and that's just how we are. I’m really close to him, so having him as a coach is really awesome. It’s really helpful too, because there's some things that another coach can't teach me that he can and that I'll listen to,” Hulsey said.

Head Coach Kyle Hardy referred to Hulsey as a “leader of the team."

“My brother was diagnosed with arthritis. He was never able to, like fully perform. He had the mind of an MLB player, but his body just wasn't really there. Seeing him still being a leader on the baseball team and not being able to function very well really made me understand what being a leader took. I realized quickly that I too wanted to be the same kind of leader like he was,” Hulsey expressed.

Coach Hardy explained Hulsey with one word in particular: Grit.

When asked, Hulsey smiled and said, “Well, I don't think there's been a baseball game that I've played in that I haven't come off the field looking dirtier than everybody else on the team.Usually I'm bleeding from somewhere and have gotten a bruise or two. That's just how I've always been.”

Hulsey gave high praise to Coach Knight, former Jefferson High School baseball coach. “Probably coach Knight and I'm only saying that because when I was like six or seven years old, my brother had just started playing high school baseball. None of the coaches that are there now, except for Coach Knight were there. I don't know, me and Coach Knight just always got along. You know every time he'd see me, he'd say hey Roger. From the outside looking in he's a great husband and a great man. I really admire him and he's a good role model,” Hulsey said.

Hulsey explained his proudest moment was when he was awarded Most Valuable Player last season for the Dragons’ baseball team.

Hulsey is slightly superstitious and has the same routine each game. “The way I put my clothes on, I put them all in a certain order. I put my cleats on in a certain order. But, a pregame ritual for me is I have to take two ibuprofen before every game no more no less and I usually chug a water or Gatorade or something,” Hulsey stated.

Hulsey credits the Jefferson Dragon baseball program for not only making him a better baseball player, but also a better man.

“At the end of every coach’s speech, Coach Hardy and Coach Knight both say our goal is not only to make you better baseball players, but to make you good men, fathers and husbands. They are both role models for us in all of these categories, they’re both just really great at what they do,” Hulsey expressed.