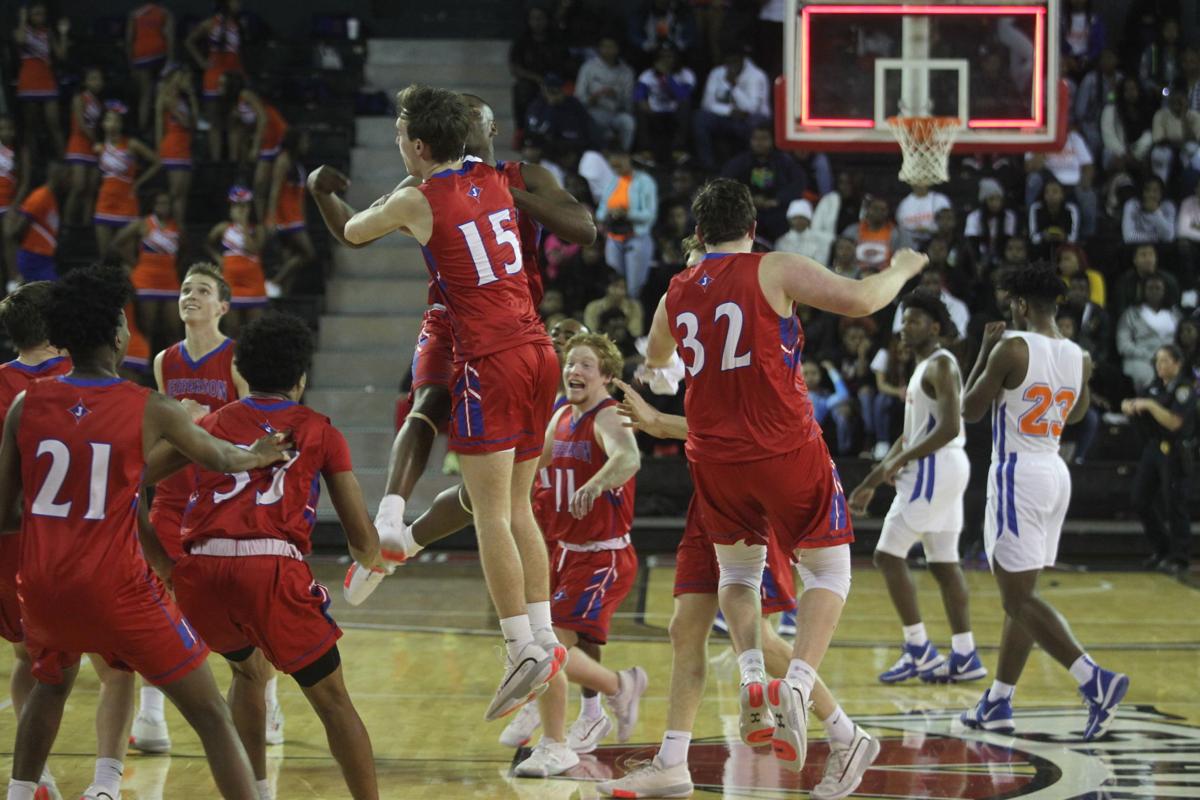 The Jefferson boys' basketball team will play for a state title after beating Central-Macon 66-58 Saturday (Feb. 29) at Valdosta State. The Dragons will face Pace Academy Thursday (March 5) in Macon for the Class AAA championship. 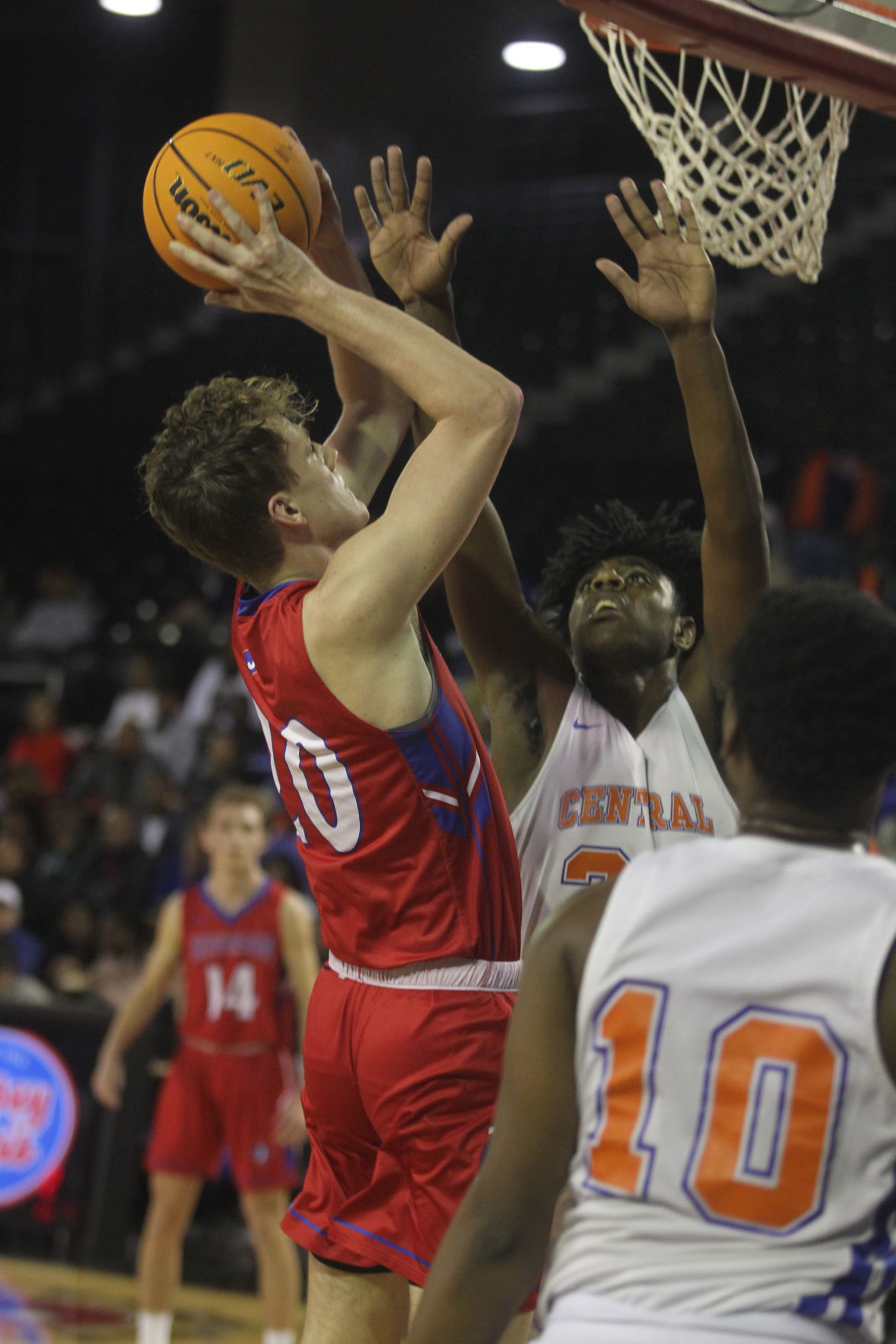 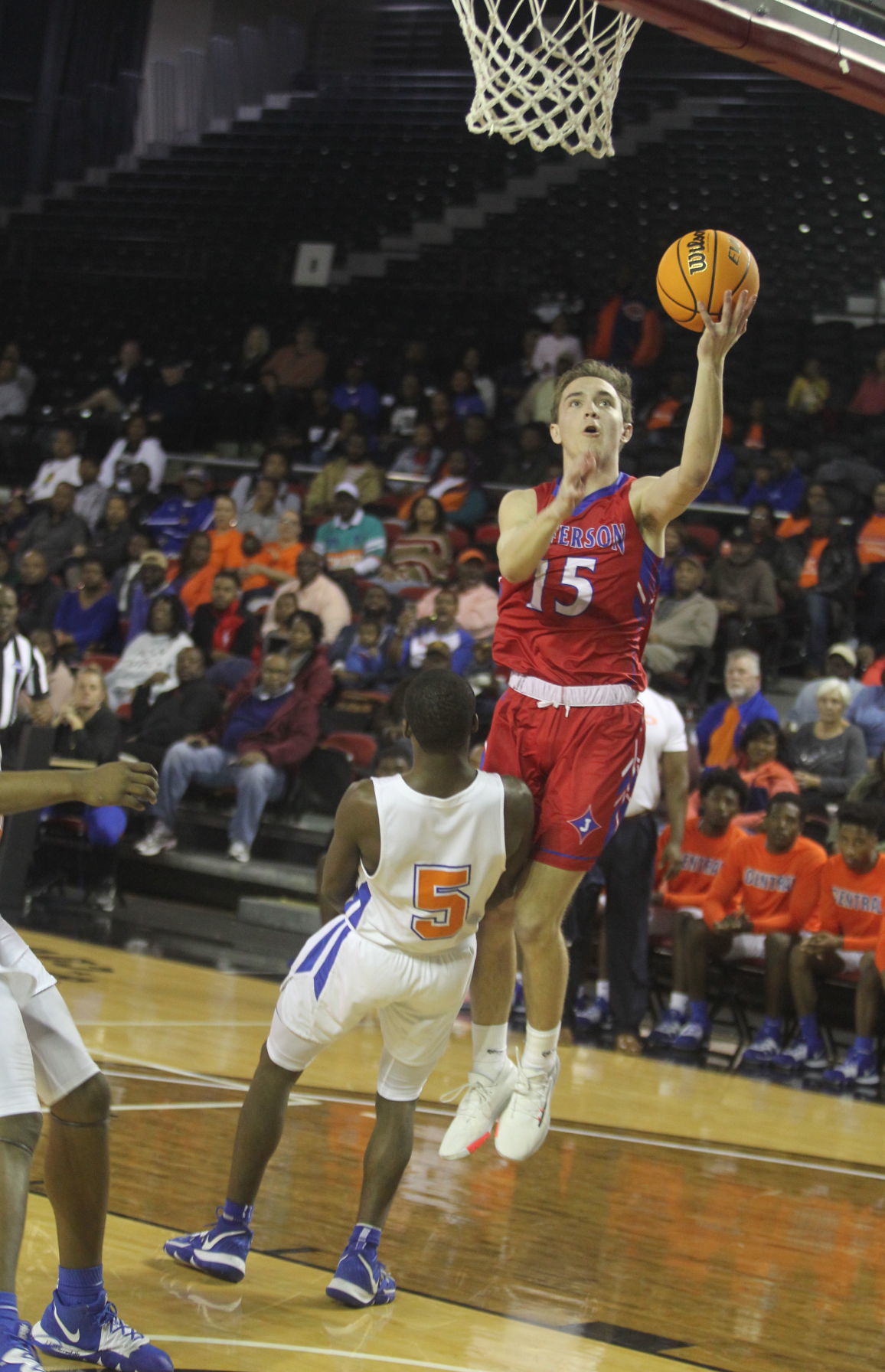 Jefferson's Daniel Parker goes in for a layup Saturday (Feb. 29) against Central-Macon in the Class AAA boys' semifinals. 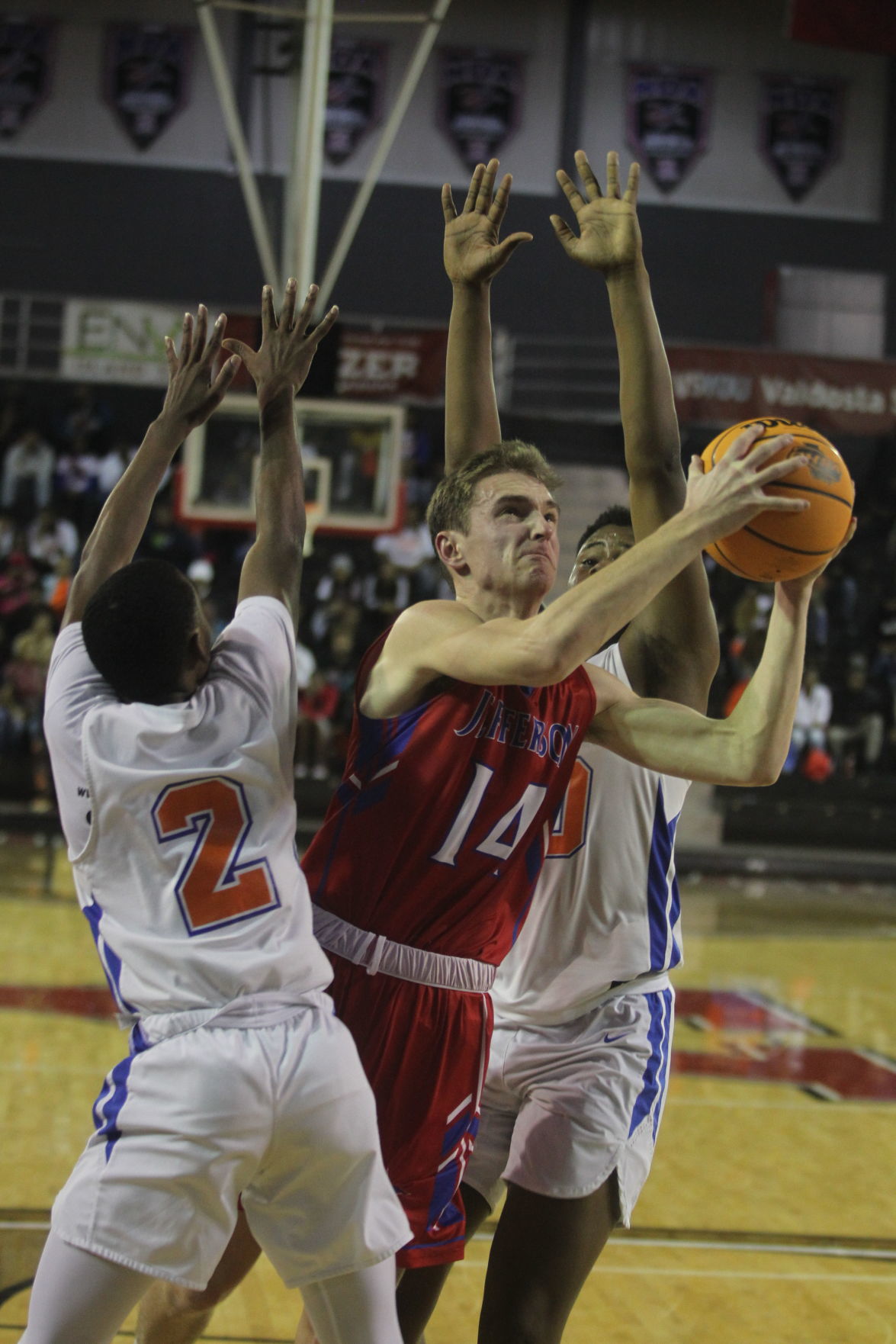 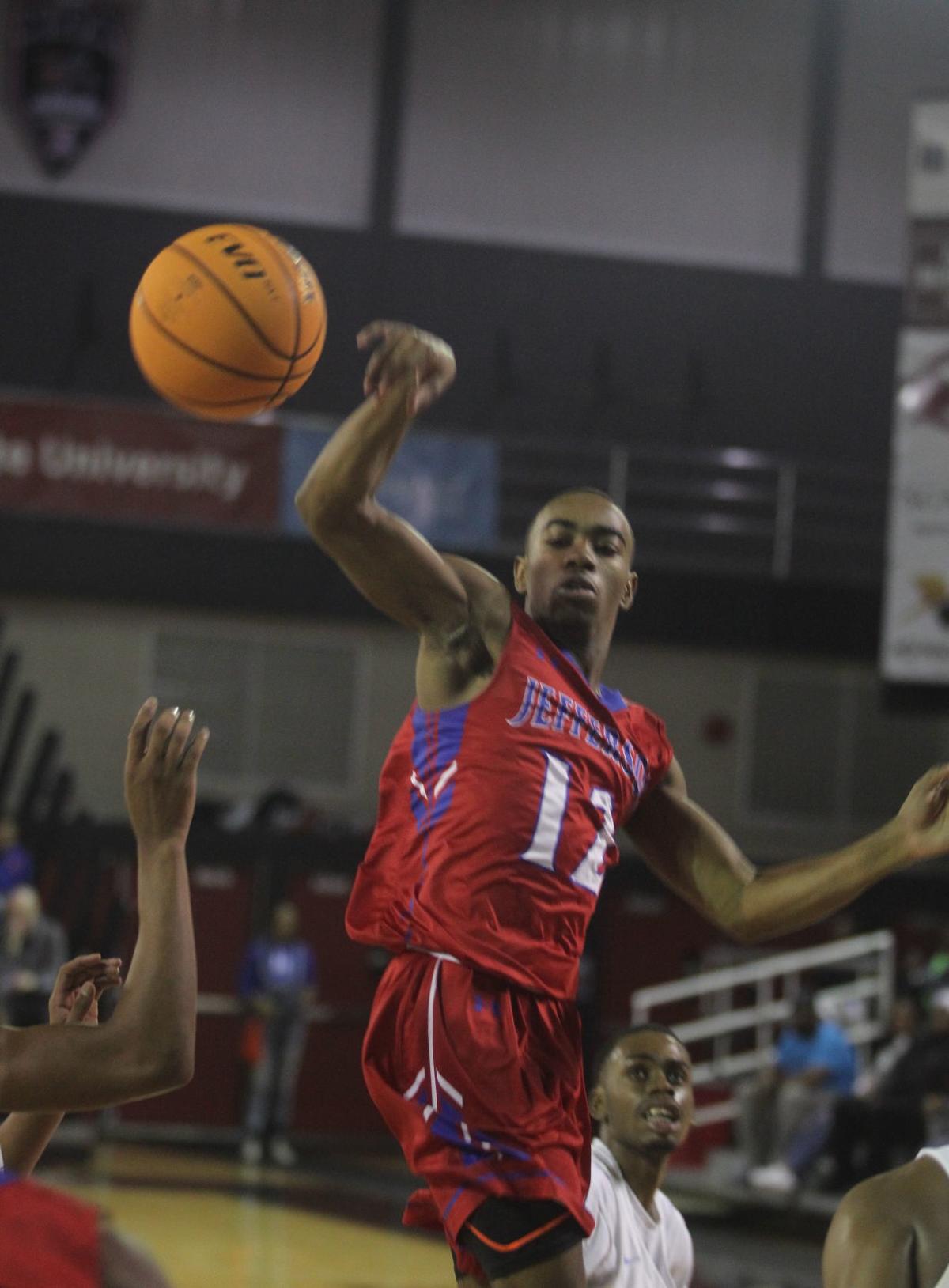 Kam Robinson dishes the ball off against Central-Macon in Jefferson's semifinals win over the Chargers Saturday (Feb. 29). 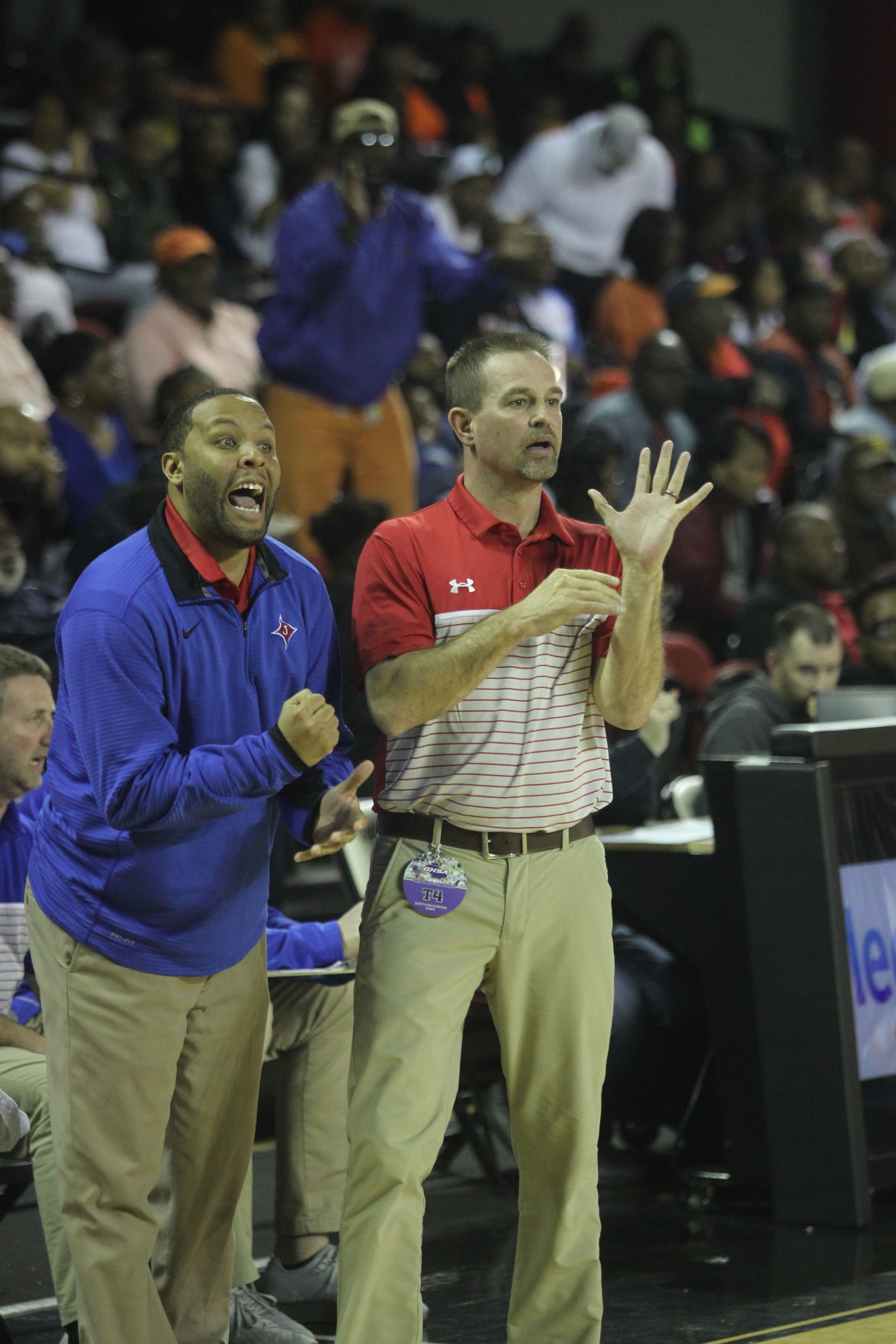 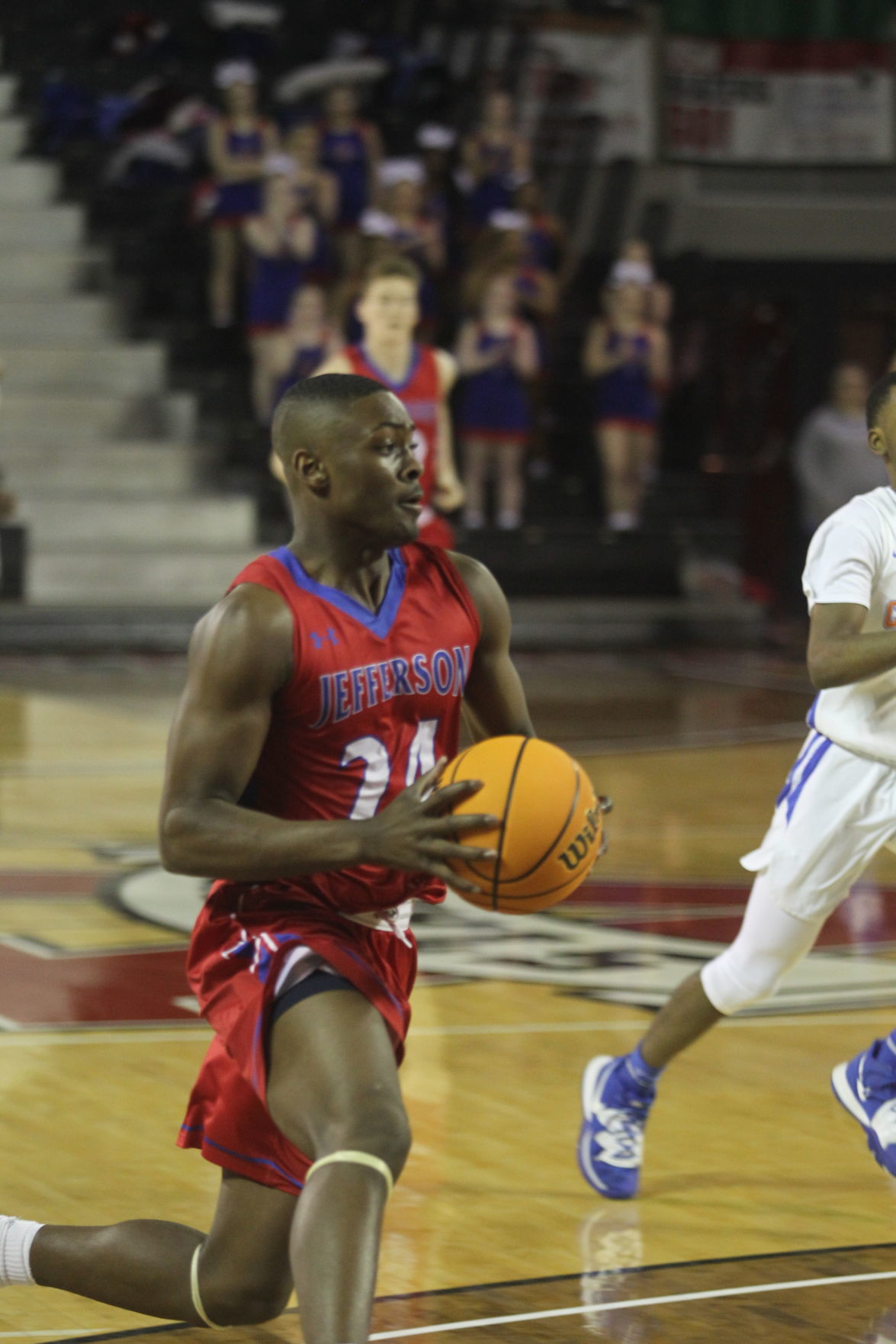 Jefferson's Malaki Starks drives toward the hoop in the Dragons' 66-58 semifinal win over Central-Macon Saturday (Feb. 29). 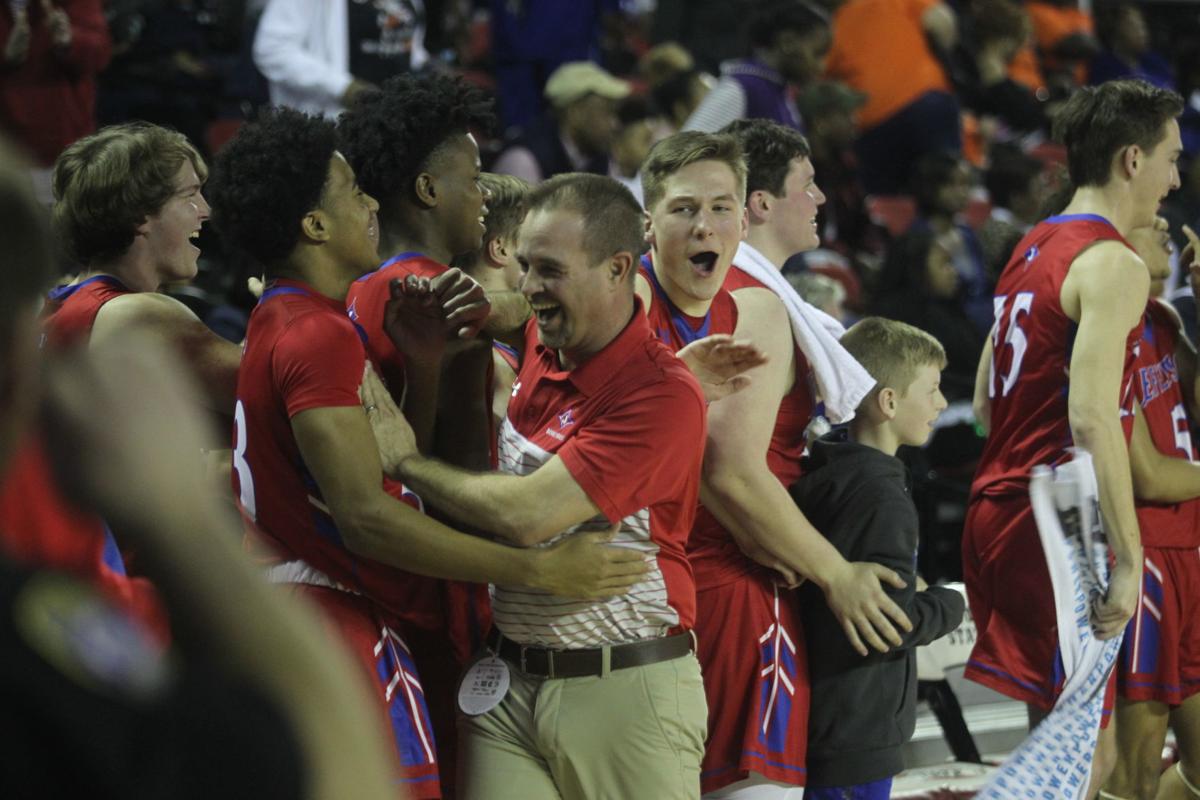 The Jefferson boys' basketball team will play for a state title after beating Central-Macon 66-58 Saturday (Feb. 29) at Valdosta State. The Dragons will face Pace Academy Thursday (March 5) in Macon for the Class AAA championship.

Jefferson's Daniel Parker goes in for a layup Saturday (Feb. 29) against Central-Macon in the Class AAA boys' semifinals.

Kam Robinson dishes the ball off against Central-Macon in Jefferson's semifinals win over the Chargers Saturday (Feb. 29).

Jefferson's Malaki Starks drives toward the hoop in the Dragons' 66-58 semifinal win over Central-Macon Saturday (Feb. 29).

VALDOSTA — For the most part, the Jefferson boys’ basketball team has tempered its celebrations during the state tournament.

But not Saturday night. The Dragons couldn’t wait to rush the floor knowing they would be playing for a state championship.

The Jefferson boys’ basketball team defeated Central-Macon 66-58 Saturday (Feb. 29) in the Class AAA semifinals at Valdosta State to advance to the state finals for the first time in program history.

“It’s a great feeling advancing every time (in the state tournament), but that’s probably the first time that we’ve — not lost our composure — but showed a lot of emotion,” Jefferson senior post player Jacob Radaker said. “And playing a close game like that, we put a lot of emotion into it, and getting that win means a lot to us, and getting to go to the championship, especially.”

The Dragons will face Pace Academy Thursday (March 5) at 8 p.m. in Macon for the Class AAA state title.

Senior guard Owen Parker said the closeness of the game had a lot to do with the jubilation.

“That was such a tough game … we kind of expected to win the last three (state tournament games), but this one was tied going into the fourth,” Parker said. “It was just a relief to win, so we were just so happy to get it done.”

Kam Robinson and Parker each scored 16 points to lead the Dragons. Radaker, who battled foul trouble, scored 15 points, nine of which came in the fourth quarter — all on 3-pointers. Robinson scored 11 of his 16 points in the second half.

Central-Macon’s Quay Primas, a 6-7 post player, was force underneath for the Chargers, countering with 30 points.

Jefferson and Central-Macon were tied 42-42 after three quarters, but Radaker — normally an inside presence — stepped outside and knocked down three 3-pointers in a row to give the Dragons a 53-44 lead with over five minutes left in the game.

But the Chargers cut the lead to two points — 58-56 — with 1:18 left before Jefferson shut the door on them with an 8-2 run to end the game and punch its ticket to the finals.

Parker, who closed out the game with a pair of baskets in the final 30 seconds, said he and his teammates remained confident down the stretch.

Jefferson led 14-9 after the first quarter and stretched the lead to 28-21 at the half, getting a basket from Radaker on a put-back just before the buzzer sounded.

But Jefferson, which had Radaker and Malaki Starks on the bench for significant stretches due to foul trouble, found itself in a 42-42 tie entering the fourth quarter.

But Radaker got open for a trio of 3’s early in the period and buried them as part of an 11-2 run to open the final quarter.

“That’s a senior that ain’t ready to stop playing high school basketball just yet. Man, he came through clutch,” Morris said of Radaker.

The Dragons opted to go with a five-out look, which ended up freeing up Radakder — who was left open — for those shots.

Morris said assistant coach Jamiel Hester suggested the tactic while on the bus ride down to Valdosta. Jefferson hadn’t shown that look since playing Monroe Area early in the year.

“It wasn’t necessarily a plan to, ‘let’s get Jacob these shots,’ but it worked out pretty good like that," Morris said.

“It wasn’t just me shooting,” Radaker said. “It was my teammates finding me, and I just happened to be in the open spot, but it was an awesome feeling.”

After Spencer Darby sank three free throws with 3:05 left in the game, putting Jefferson up 56-50, Central Macon scored six of the next eight points to pull within two points. Antonio Card’s lay-in at the 1:18 mark made the score 58-56. But Robinson converted four-straight free throws over the next 40 seconds to give Jefferson a two-possession lead over the Chargers (62-56).

Robinson was 6-of-6 from the free throw line in the fourth quarter.

“That’s the thing about Kam,” Morris said. “The lights don’t get too bright, the arena doesn’t get too big. He’s just cool and calm. He doesn’t let the big things overwhelm him, and he just keeps his composure.”

Parker essentially sealed the win with a layup with 30 seconds left that gave Jefferson a 64-56 lead. Following a pair of made free throws from Central-Macon's Primas, Parker scored on a run-out layup in the closing seconds to give the Dragons their final margin of victory.

The Dragons faced a 4.5-hour ride home after the win, but Parker said it wouldn't seem that long given what the team accomplished.

“It’s going to be fun,” he said. “It would have been miserable if we’d lost, but now that we’ve won it, it might feel like a 30-minute ride.”

From Day 1, Jefferson’s basketball players have said a state championship was the goal. Now, they’ll play for one.

“It’s surreal, finally getting to the state championship, getting the chance to play against Pace, especially Matthew Cleveland,” Radaker said. “It’s an amazing feeling. It’s great. I can’t wait.”

Parker also referenced Cleveland, who has scholarship offers from 28 colleges and ranks as the No. 14 player nationally according to 247 Sports.

“They’re tough,” Parker said. “We all know they’ve got Matthew Cleveland. We’ve got the players to compete with them. We’ll just go as hard as we can.”

The historic finals appearance for Jefferson adds another layer to this senior class’s legacy. Parker pointed out that this group only won four games as freshmen in 2016-17.

Radaker even pointed to players in the class that didn’t finish out their careers at Jefferson in talking about the moment.

“All the players that couldn’t be here, that left, we’re doing it for them, too,” Radaker said. “Because they helped shape us. It’s just awesome to leave a legacy like this … It’s amazing, especially for coach Morris in his third year here, to be able to do this with him.”

Now, the Dragons face the final hurdle in their title quest.

“Nobody else is going to win it except us or Pace — it might as well be us,” Morris said. “Why not us?”