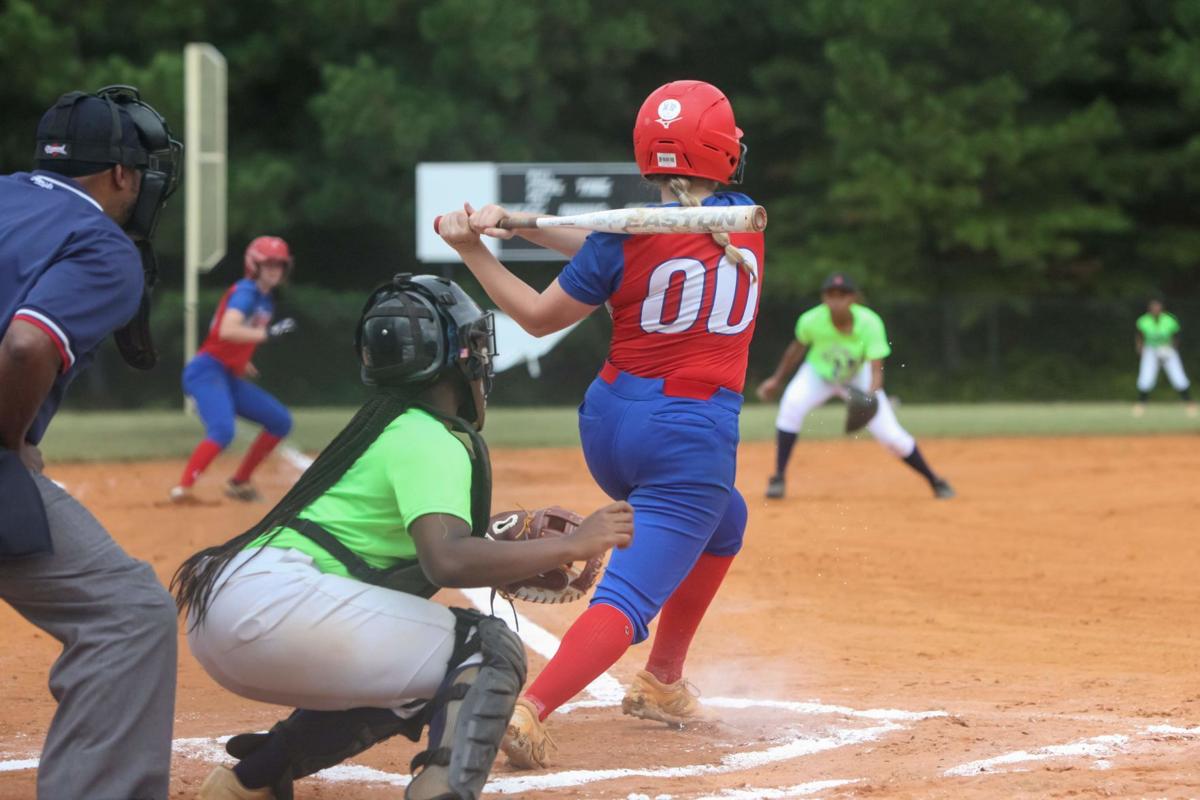 Taylor Spivey makes contact with a runner at third base on Tuesday (Oct. 12) during Jefferson's playoff series win at Arabia Mountain. 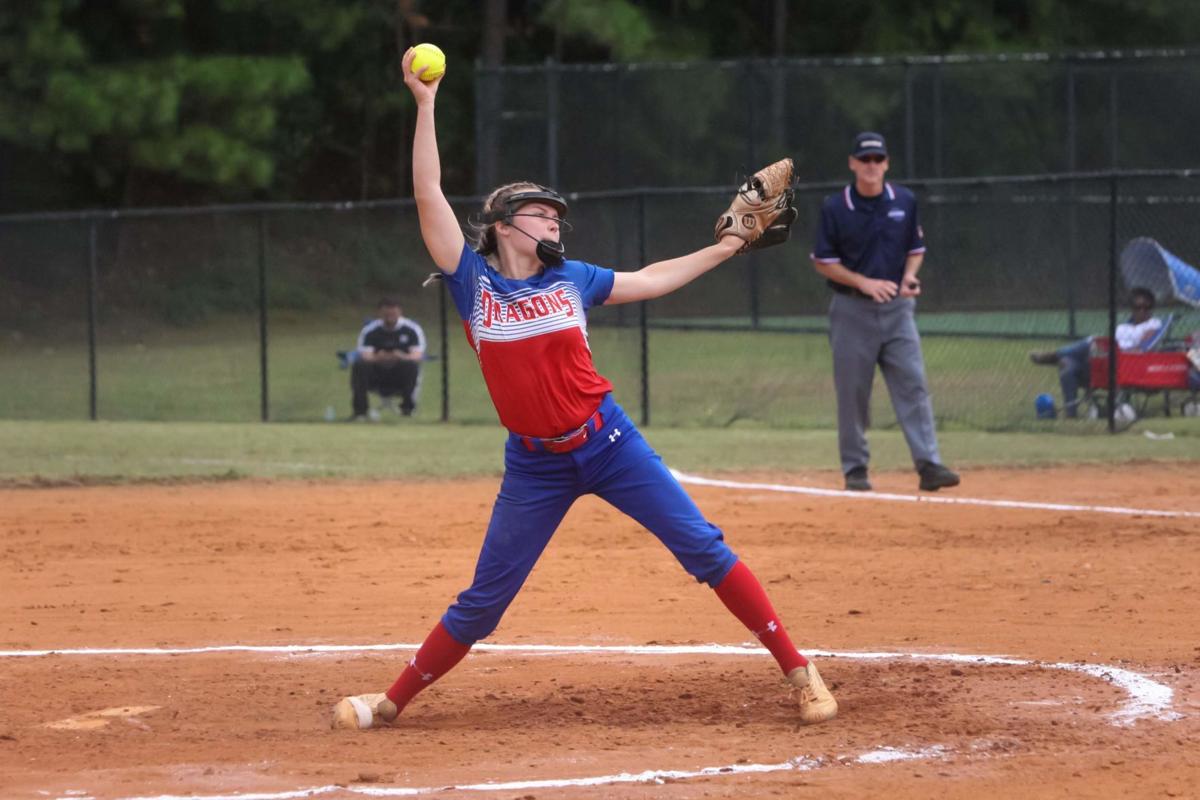 Ravyn Saxon unloads a pitch Tuesday (Oct. 12) at Arabia Mountain in the first round of the AAAA State Playoffs.

Taylor Spivey makes contact with a runner at third base on Tuesday (Oct. 12) during Jefferson's playoff series win at Arabia Mountain.

Ravyn Saxon unloads a pitch Tuesday (Oct. 12) at Arabia Mountain in the first round of the AAAA State Playoffs.

LITHONIA – At one point this season, Jefferson’s playoff hopes were in doubt. Now the Dragons are heading to the second round of the AAAA State Playoffs after sweeping Arabia Mountain on the road on Tuesday (Oct. 12).

Jefferson entered as the No. 3 seed and defeated the No. 2 seed Rams 16-4 in game one and 12-4 in game two. The Dragons will travel to West Laurens next Tuesday (Oct. 19) for the second round of the playoffs. The winner will play in the AAAA State Softball Tournament in Columbus on Oct. 28-30.

“I think we are playing the right kind of softball at the right time,” said head coach Kacie Bostwick of the improvements Jefferson has made through the season. “We weren’t settled in our lineup, we were still trying to make some changes to things. I think people are more comfortable with what they’re doing and what their role is on the team.

“We are a good hitting team… I don’t think we’ve proved it up until recently. Hopefully, we stay hot going further into the playoffs.”

Jefferson (15-9, 9-6 Region 8-AAAA) left little doubt as to who the better team was by scoring four runs in the first inning and eight runs in the second inning of game one. Ellie Kinlaw and Anslee Pittman opened the game with bunt singles. Kinlaw scored on Taylor Spivey’s sacrifice fly and Pittman scored on Emma Kate Sorrells’s triple to right field. Jefferson led 2-0 with just one out.

An error on a throw to second base from the catcher allowed Audrey Burton and courtesy runner Maddyx Thornton to score and extend Jefferson’s lead to 4-0 in the top of the first inning.

Kinlaw opened the second inning with another infield single. This time she reached home on an error off Pittman’s bat. Pittman was caught trying to advance to second base, but that wouldn’t slow down Jefferson’s offense. Spivey followed the out with a double to enter field, she scored when the next three batters walked. Three more walks in succession, with bases loaded, allowed Jefferson to take a 9-0 lead in the top of the second inning.

With two outs and bases still loaded, Pittman hit a deep fly ball, but the left fielder failed to make the catch, allowing three runs to score. Jefferson led 12-0. The Dragons added three more runs in the top of the third inning via a single by Skylar Bradley and a fielder’s choice by Kensie Pugh.

Brady got Jefferson its run back with a line drive which drove Burton home. Jefferson led 16-4 and shut down Arabia Mountain in the fourth inning to bring the first game of the doubleheader to a close. Ravyn Saxon started and finished the game, throwing just 45 pitches, but striking out five batters in 3.2 innings.

“She’s just a competitor,” Bostwick said of Saxon. “I don’t know another way to put it. You wouldn’t know it, but she’s hurting, she’s in pain, but you wouldn’t know it by the way she pitches. She has got a lot of heart and she just wants to win. She’ll do whatever it takes to do that.”

The Dragons didn’t jump on the Rams the same way they did in the first game, but Jefferson still had a lopsided lead after three innings.

Ellie Kinlaw reached base once again as the leadoff batter, this time she walked in five pitches. A sacrifice bunt and a wild pitch allowed her to reach third base. She then scored on Madison Hanchey’s line drive to center field. Hanchey stole second and third base and kept running on an error at second base to score Jefferson’s second run of the game. The error came from Audrey Burton’s bat and she used her speed to steal two bases and home plate. Jefferson led 3-0 after one inning.

Skylar Brady scored on a wild pitch in the second inning. A double by Natalie Beck and a grounder by Kinlaw increased Jefferson’s lead to 8-1 after three innings.

The Rams wouldn’t stop pestering Jefferson however. They scored four runs in the top of the fourth inning, which helped prolong the game. Ultimately, Jefferson won in the sixth inning.

Burton used a wild pitch to extend the Dragons’ lead to 9-4 in the fourth inning. Taylor Spivey hit a sacrifice fly and Hanchey hit an RBI single to add two more runs in the fifth inning. Maddyx Thornton and Pittman crossed home plate to extend the lead to 11-4. Greysin Busch closed the game with a sacrifice fly in the bottom of the sixth inning that brought Hays home. Jefferson won 12-4.

All four teams from Region 8-AAAA advanced to the second round of the AAAA State Playoffs. The biggest surprise was No. 4 Flowery Branch sweeping Region 6-AAAA Champions Marist on the road.

No. 2 Madison County swept No. 3 Druid Hills, while No. 1 North Oconee swept Mays.

“The teams that we play in our region are as good as any team that we’ll face until we get to Columbus,” Bostwick said. “I think the four teams from our region are Columbus-caliber teams. I’m glad we were able to play those types of games all year long.”