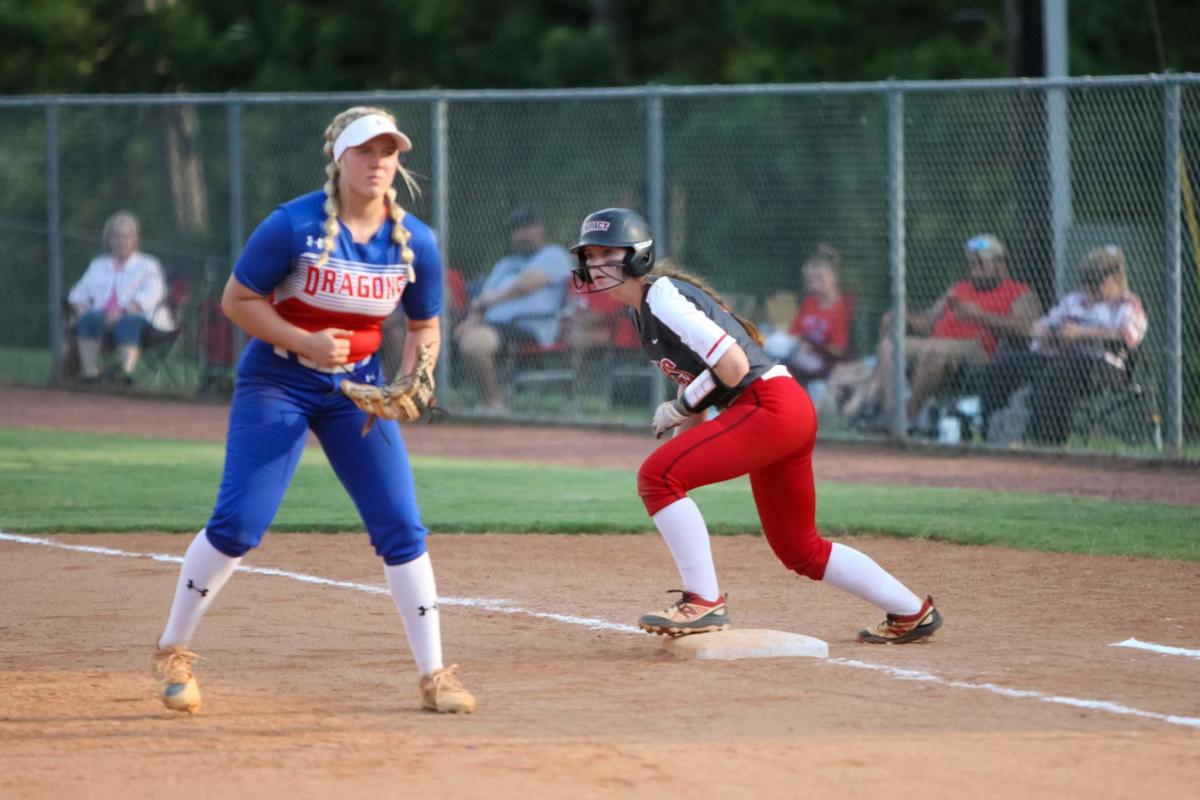 A Winder-Barrow base-runner prepares to launch from first base against Jefferson. First baseman Taylor Spivey gets in position before the pitch. 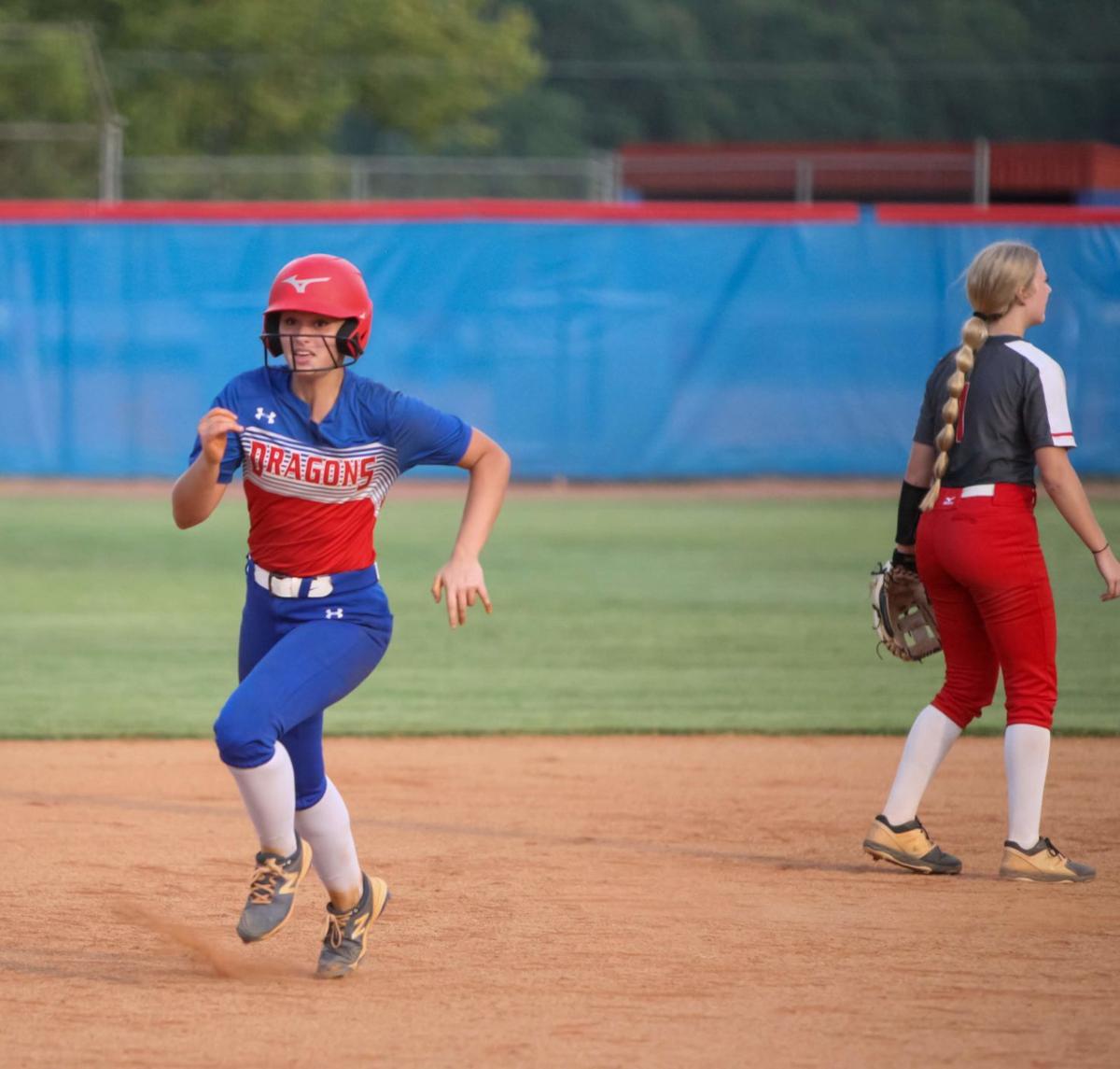 Maleia Truelove rounds second base and runs into third base to secure a triple in the second inning. She scored on the next pitch to give Jefferson a 1-0 lead.

A Winder-Barrow base-runner prepares to launch from first base against Jefferson. First baseman Taylor Spivey gets in position before the pitch.

Maleia Truelove rounds second base and runs into third base to secure a triple in the second inning. She scored on the next pitch to give Jefferson a 1-0 lead.

JEFFERSON – Winder-Barrow scored three unanswered runs over the seventh and eighth innings to open its 2021 season with a victory over Jefferson Tuesday, Aug. 10.

The Bulldoggs defeated the Dragons 5-3 behind Marissa Metz’s perfect 3-for-3 night at the plate. Her highlights included an RBI double and a run in the fourth inning and a leadoff double plus the eventual game-winning run in the eighth inning.

Emily Hall handled pitching duties for most of the night, tossing in six innings and allowing seven hits while holding the hard-hitting Dragons to just three runs. Rylie Beddingfield took over to pitch the last two innings. She struck out three batters and only allowed two hits.

Jefferson used its entire pitching staff against Winder-Barrow. Camoreea Hart started and pitched four innings, allowing only four hits, but her night ended after giving up a pair of runs in the fourth inning. Ravyn Saxon took the circle in the fifth inning and tossed Jefferson’s only two strikeouts of the night, but she allowed Winder-Barrow’s three decisive runs in the final innings. Taylor Spivey relieved her in the eighth inning and secured the three outs to give Jefferson’s offense a chance.

Winder-Barrow trailed Jefferson 3-2 with two outs in the top of the seventh inning when Dayton Power singled on a hard grounder into center field. A walk to Abby Polk moved Power into scoring position and she crossed home plate when Alyssa Bond doubled on a line-drive to centerfield.

Jefferson had the ingredients for a rally when the fleet-footed Ellie Kinlaw hit a one-out infield single before stealing second base. After a pop fly by Spivey, Kinlaw attempted to steal third, but she was caught at the base for the third out.

Metz sparked Winder’s game-winning rally with a double to start the eighth inning. Ashlyn Christy laid down a great bunt to move Metz to third, but Saxon’s throwing error on the play allowed Metz to cruise into home plate. A line drive by Hailey Frasier brought Christy home to give Winder-Barrow a 5-3 lead.

Jefferson showed some fight in the bottom of the eighth inning when Maleia Truelove singled on a grounder into left field with one out. However, a pair of strikeouts by Beddingfield prevented her from advancing.

The Dragons had a chance to take a much greater lead in the second inning. Truelove hit a leadoff triple and scored when the very next pitch went wild to give Jefferson an early 1-0 lead. Savannah Smith then reached first on an error before Greysin Busch and Kensie Pugh singled to load the bases with one out. Jefferson’s attack ended when Audrey Burton hit a pop-fly which lead to a double-play when right fielder Alexis Edmondson caught Pugh before she could return to first base.

Winder-Barrow took its first lead of the game in the fourth inning thanks to a pair of doubles by Metz and Beddingfield. The Bulldoggs led 2-1 until Jefferson regained the lead in the fifth inning. Burton scored the game-tying run on an error at third base. Kinlaw gave the Dragons a 3-2 lead when she scored on Spivey’s sacrifice fly.

Winder-Barrow was scheduled to host Jackson County on Wednesday, Aug. 11. The Bulldoggs don’t start Region 8-AAAAAA play until they travel to Shiloh on Tuesday, Aug. 17.