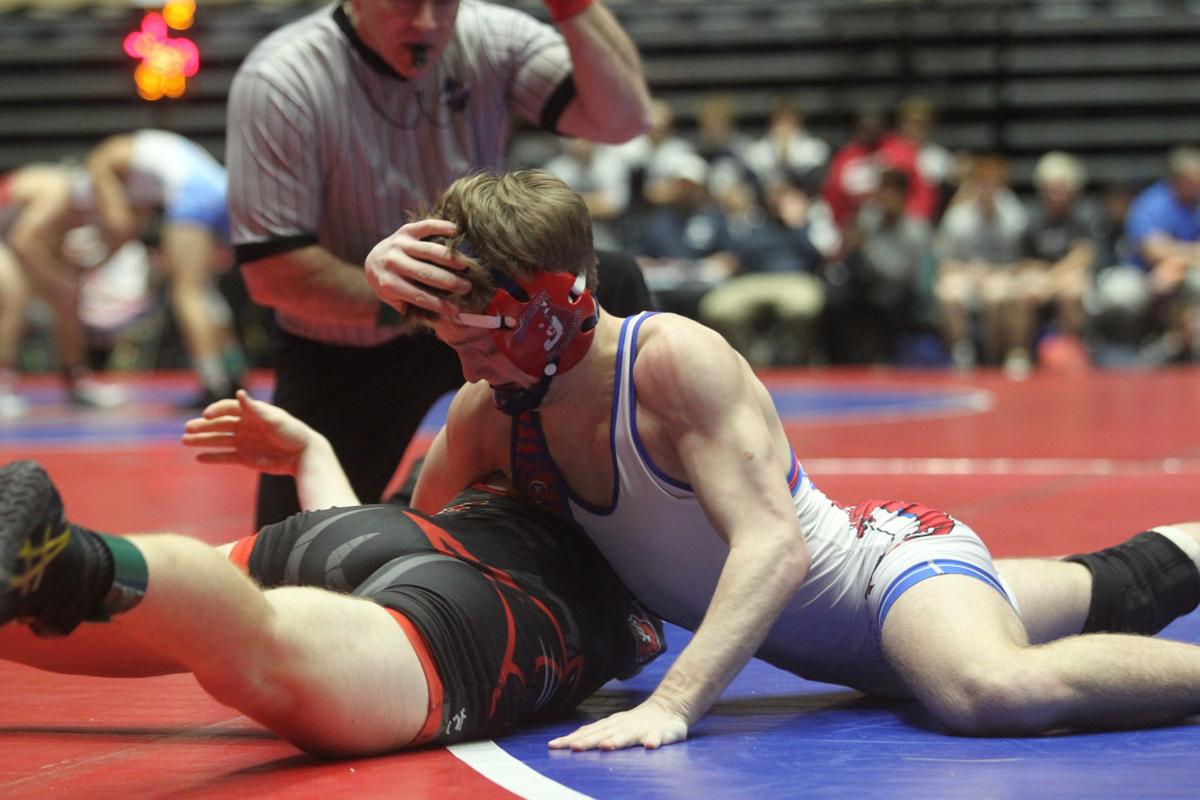 Jefferson's Christian Parten wrestles in the 132-pound match Saturday against Jackson County in the Class AAA state duals consolation finals. The Dragons lost 32-29 finishing fourth. This is the first time since 2002 that Jefferson hasn't won a state duals title, ending a record streak of 18-straight championships. 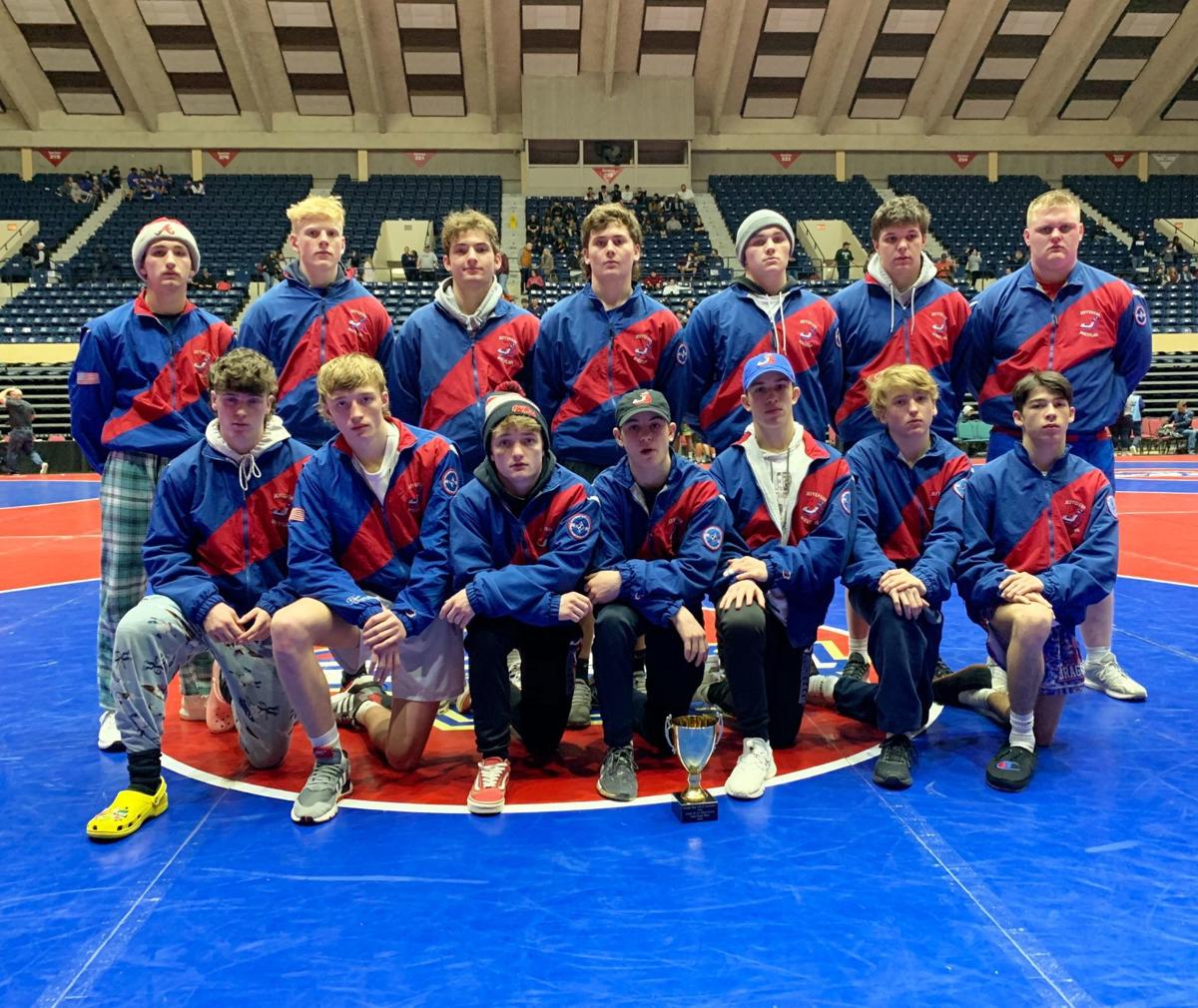 The Jefferson wrestling team poses with the Class AAA duals fourth-place trophy Saturday after a streak of 18-straight state duals titles was broken.

Jefferson's Christian Parten wrestles in the 132-pound match Saturday against Jackson County in the Class AAA state duals consolation finals. The Dragons lost 32-29 finishing fourth. This is the first time since 2002 that Jefferson hasn't won a state duals title, ending a record streak of 18-straight championships.

The Jefferson wrestling team poses with the Class AAA duals fourth-place trophy Saturday after a streak of 18-straight state duals titles was broken.

When the state dual finals were being wrestled Saturday, Jefferson found itself in an unusual position.

For the first time in nearly 20 years, the Dragons weren’t on the mats, but on the bus instead, traveling back up the interstate from Macon.

First-year Dragon coach Kyle Baird, who took over for hall of fame coach Doug Thurmond this year, said it was tough watching a historic run conclude.

“It is tough to see it end, but there’s a lot of pressure there on me just to try to keep that thing rolling,” Baird said. “In two senses, it’s almost kind of a relief, but I’m disappointed it happened. Because nobody goes in there wanting to lose. I thought my guys fought hard and did their best, and that’s all I can ask for.”

The Dragons knew the streak was done a day before the tournament ended.

Jefferson beat Stone Mountain 49-20 Thursday to open the Class AAA duals tournament, but lost to Sonoraville 48-22 in the semifinals Friday, sending the Dragons to the consolation rounds and ending their bid to defend their title.

Jefferson beat Adairsville 39-24 on Saturday in the consolation semifinals but lost to rival Jackson County 32-29 in the third-place match later in the day. It was Jefferson’s first loss to its crosstown foes in 18 years.

In that consolation finals loss, Jefferson got wins from its strongholds at the bottom of the lineup with major-decision victories from Chaz McDonald (106), Davis Dollar (113) and Mason Mingus (126) and a pin from Tyson Thurmond (120). It also got a win via decision (9-5) from Christian Parten (132). But Jefferson managed just two more wins throughout the rest of the lineup — Avery Nelms (technical fall, 170) and Colton Steele (1-0 decision, 285).

Jefferson had beaten the Panthers 44-18 for the area dual championship on Jan. 10, but Jackson County, on Saturday, used different pairings in four weight classes compared to the 6-AAA area finals, and won three of those four bouts.

“I would say that (Jackson County coach) Jason Powers did a great job with how he got to flip his guys,” Baird said. “He had that luxury to where he could weigh-in some guys at a different weight and bump his better wrestler.”

Baird added, “If I were in his shoes, I would have done the same thing. He did a great job. All the credit is to him.”

Baird said his group was disappointed with how this duals tournament went.

And this was unfamiliar territory for the Dragon program overall.

“Half of the kids on that team weren’t even alive when we started winning state championships,” he said. “So, they don’t know what it’s like to not win. They had a very humbling experience I would say.”

Jefferson will try to use the experience as motivation for next season, when it will move up to Class AAAA.

“We talked about that last night (Friday) after the Sonoraville match,” Baird said. “That this is something that you’ve got to remember how this feels and make sure that come next year this time, that this doesn’t happen anymore.”

The duals disappointment may also serve to spur the Dragons on in the traditional portion of their schedule this season. Jefferson will work towards getting ready for the area tournament on Feb. 1, the sectionals Feb. 7-8 and the state tournament Feb. 13-15.