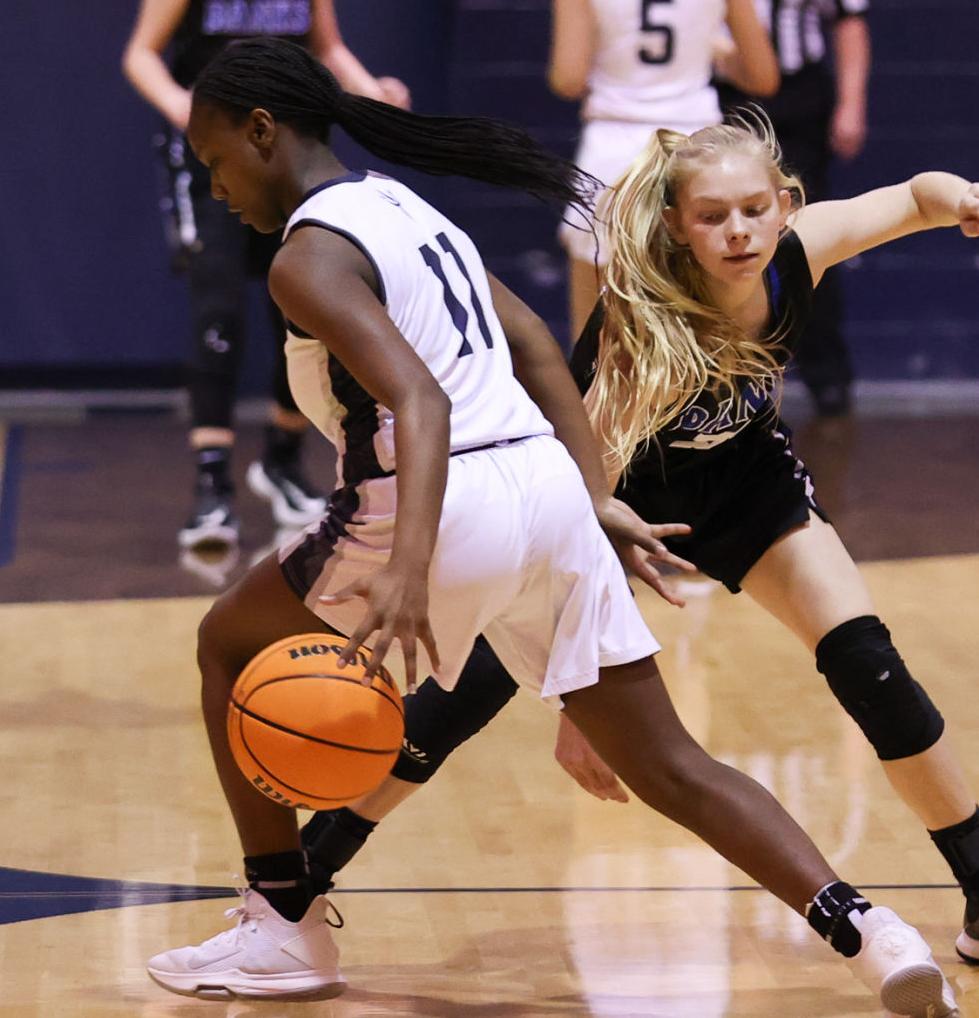 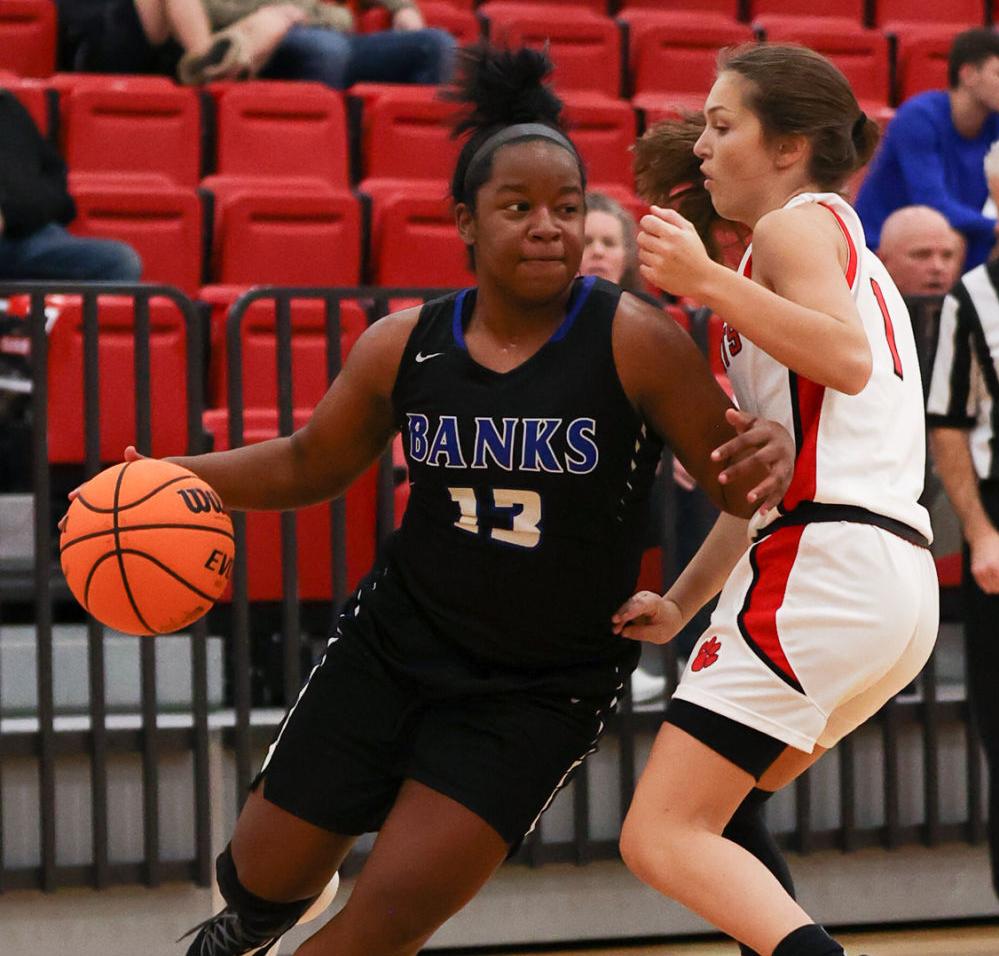 Kalyn Beasley dribbles through a defender during the Rabun County game. 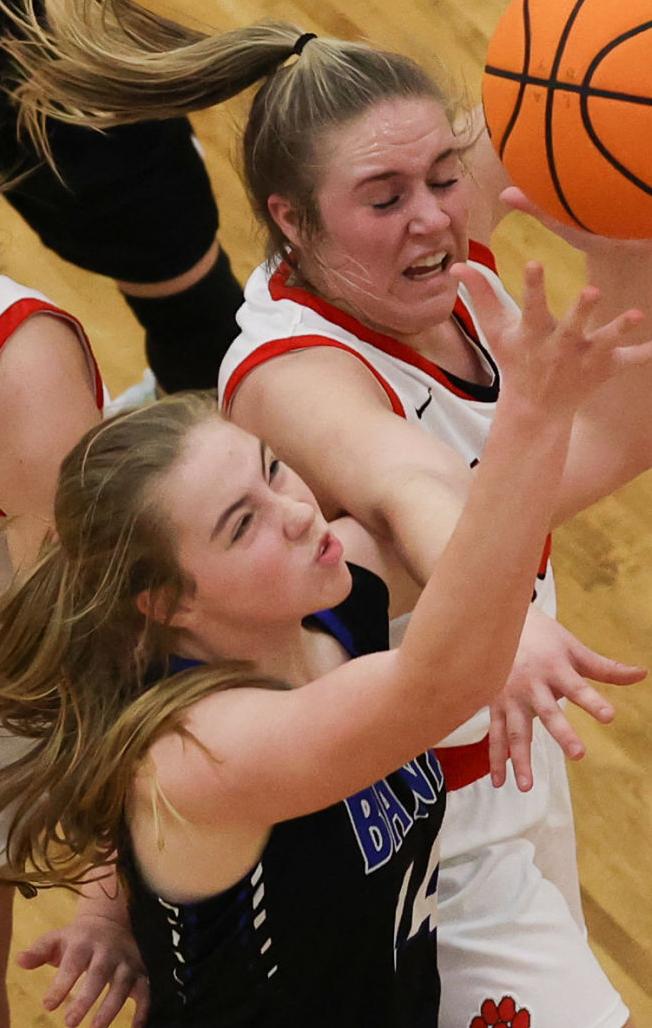 Carley Segars fights for rebound during the Rabun County game.

Kalyn Beasley dribbles through a defender during the Rabun County game.

Carley Segars fights for rebound during the Rabun County game.

The Banks County High School girls' basketball team is now tied for third in the region after two losses this week against Rabun and Elbert.

The team has been plagued with injuries this season starting with their top guard Jacy Ayers, Jenna Reeves (sidelined after Rabun game) and Kylee Hopper. Ayers and Reeves both averaged about 15 points per game. Reeves and Ayers brought outside threats to the team and were critical losses for the Leopards.

"We are having to pull a lot of players off the bench that has seen very little varsity time and are inexperienced," Coach She'd stated. "They are doing the best they can, but it's been tough."

Kamryn Grier has been the consistent top scorer. She is averaging over 20 points per game, especially after her dominating performance against Lakeview with 36 points. Coach Shedd commented that Grier is playing solid offense and defense for the team and has had to step up considerably because of injuries.

The Leopards' game plan against Elbert County was to set minimize turnovers and take advantage of possessions on offense, but that game plan was quickly shattered with guard Kalyn Beasley went down with an injury early in the game. The team was already missing Reeves and many other players, and without Beasley, the Leopards only had one player in double digits, which was Grier. She had 20 points during the game. The Leopards held the Elbert Blue Devils during the first but were quickly outscored by the fast-paced team during the rest of the game.

"Elbert has a great group of girls," Coach Shedd said. "They are fast, quick, and work well as a team. They are tough to beat. It is a hard atmosphere to play in, and with the injuries we have, it is even tougher."

The Leopards fought a close game against the Rabun County Wildcats, and it was a rough second quarter that caused the gap between the two teams. The Leopards played zone during the first half, and unfortunately, was no match for Rabun County, as they were able to score nine 3 pointers during the half.

Grier, Reeves, and Hoard put some points on the board, and the score was 36-24, with Rabun leading.

After the half, the Lady Leopards changed their defense to man and put more pressure on the Wildcats, which proved more effective. The Leopards held the Wildcats with only a difference of 6 points in the half. However, the Leopards fell short, and Rabun County secured the win with a final score of 69-51.

Shedd said of the game that the team is improving, and it is a continuous process of preparation for the region tournament when wins and losses really matter.

The Lakeview Lions were no match for the Lady Leopards at the Martin Luther King Showcase. The Leopards dominated the entire game, except for the second quarter, with both teams scoring 20. Grier scored 36 points, Reeves had 20 points, and Hoard had 14 points.

The Leopards are now 13-9 in the season and 0-3 in the region. The Leopards will take on Union this week and still have the chance to finish strong with three games left in the regular season.