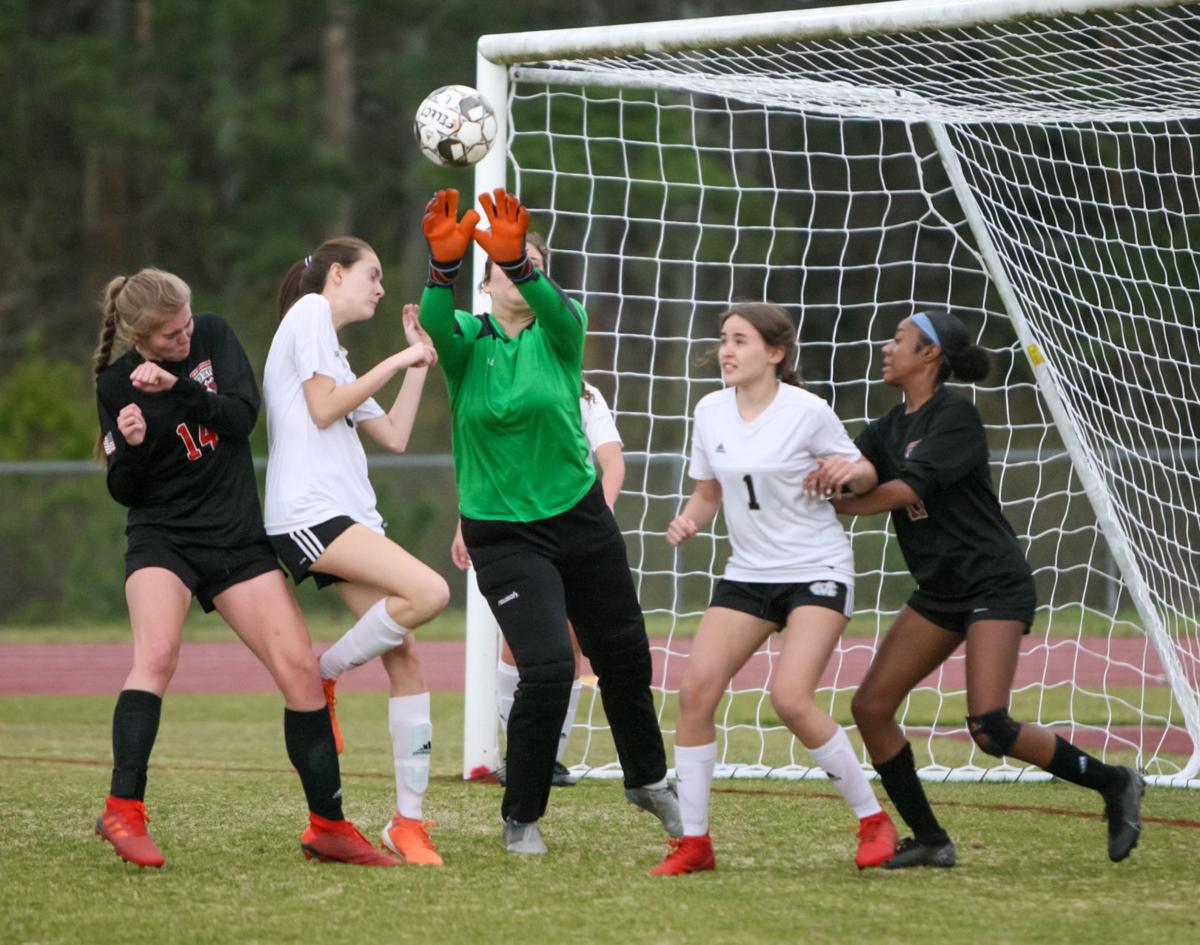 Josie Johnson breaks up a scoring opportunity on a corner kick during Madison County's 4-0 loss to Loganville. 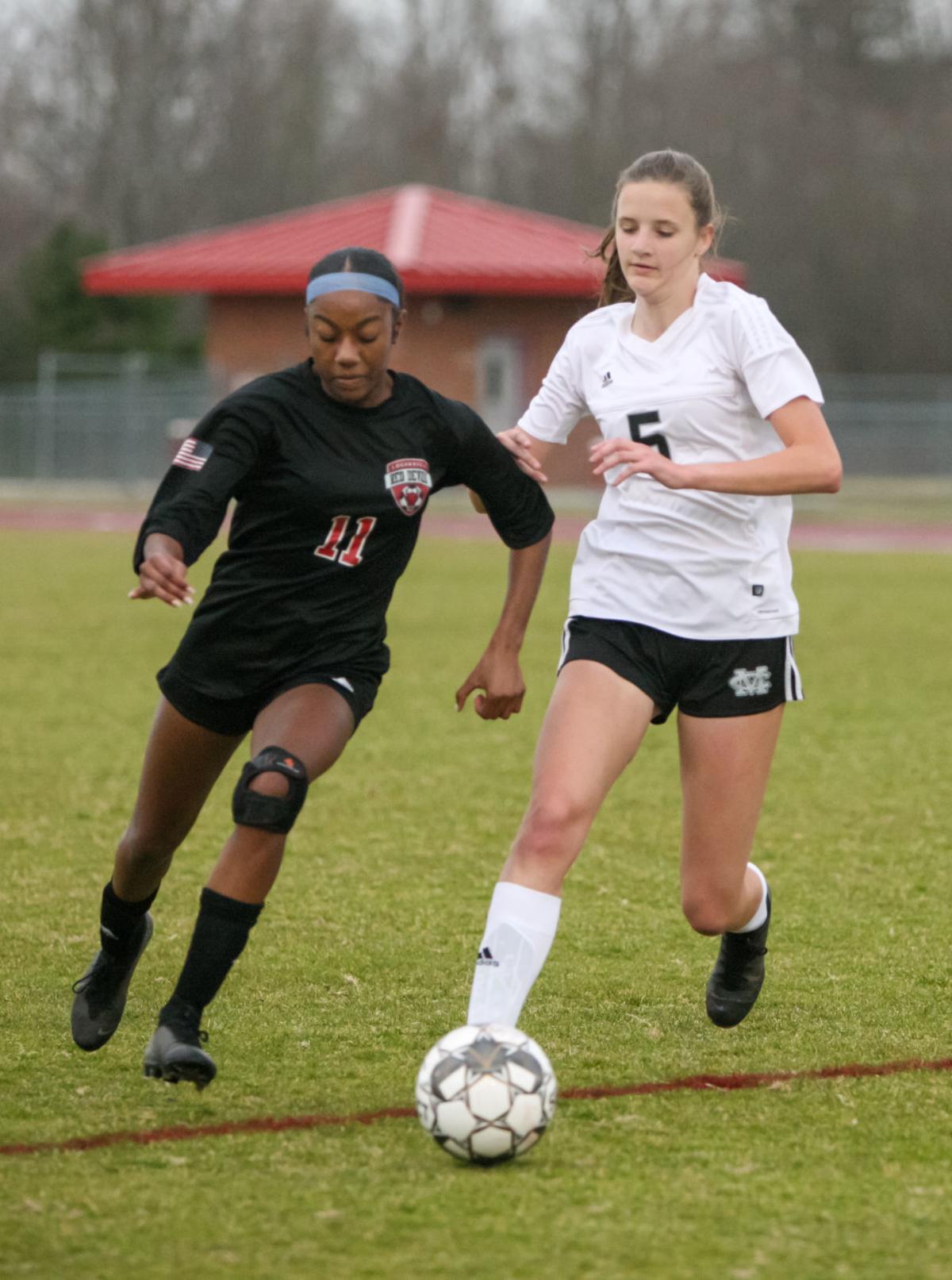 Victoria Waters chases down a Loganville ball handler during Madison County 4-0 loss to the Red Devils.

Josie Johnson breaks up a scoring opportunity on a corner kick during Madison County's 4-0 loss to Loganville.

Victoria Waters chases down a Loganville ball handler during Madison County 4-0 loss to the Red Devils.

The Red Raiders lost to the Red Devils 4-0, allowing three goals in the second half. They lost both games at Jekyll Island, 9-0 to Dunwoody and 1-2 to Brunswick.

“I think we played well in the first half and then some fatigue set in,” Reno said. “We just returned from our Jekyll Island Tournament and I think a lot of the girls are still tired just from all the riding, the games played in consecutive days and then getting in and trying to do homework, because they were out for two days.”

Despite allowing four goals, keeper Josie Johnson played well, making numerous saves and making the goal seem smaller for Loganville’s strikers. In each of Loganville’s goals, the Red Devils had to overwhelm Johnson to get the ball past her.

At the 37th minute, a Madison County (4-6-0, 0-0-0 Region 8-AAAA) defender lost track of a striker in the middle and Loganville (5-2-1, 1-0-0 Region 8-AAAAA) delivered a good cross from the left side of the box. In the 50th minute, Loganville had a corner kick and needed three shots without a clearance to get the ball into the net. Five minutes later, Johnson lost track of the ball through heavy traffic and at the 69th minute, Loganville shot from nearly 40 yards away and the ball was too high for Johnson to save.

“Josie has been pretty good at coming out for corners, but tonight, they put a lot of people around her in the box,” Reno said. “She was fighting through and she was doing really well to be able to still get contact, so I thought she did phenomenal.

“I think we got caught ball watching once, I don’t think we were in the correct positioning. But that’s one goal out of four and she saved a whole lot of other goals that could have went in.”

Madison County lost both of its games at Jekyll Island in different fashion. The Red Raiders couldn’t hang with Dunwoody and lost 9-0. They led for much of the game against Brunswick but allowed a comeback in the second half and lost 2-1.

“It was pretty rough, weather was really great when we got down there,” Reno said. “We played Dunwoody on Friday, I actually talked to the varsity coach and every single girl on varsity plays club. You could tell. Speed of play was different, intensity was different. But I think it was a good learning game for the girls.

“We came out (against Brunswick) and had a 1-0 lead at the beginning of the game. We were playing kind of flat and gave up the lead in the second half. We had possession maybe 90-percent of the game, and they had one boom ball that ended up going over the defense.”

Madison County starts Region 8-AAAA play this Friday at North Oconee (8-1-0, 0-0-0). The Titans have the best record out of all Region 8-AAAA teams.

“They’re a great team and he (head coach Ben Brassmyer) is a great coach,” Reno said. “I know how well he’s prepared them. They’re ready to compete for a region title. We’re the first region game they play and they’re going to come out intense. We’re just hoping to be able to match it.”