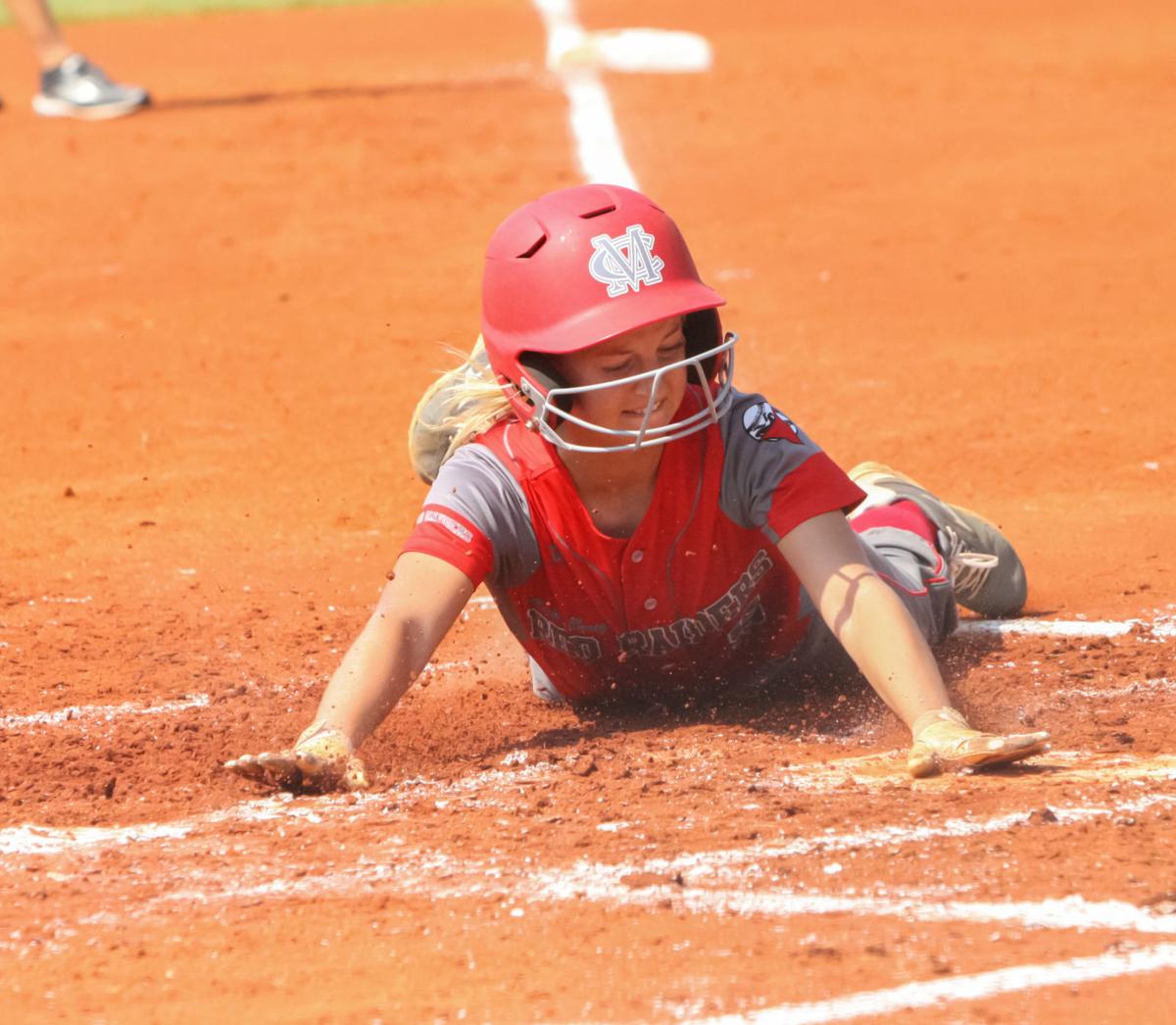 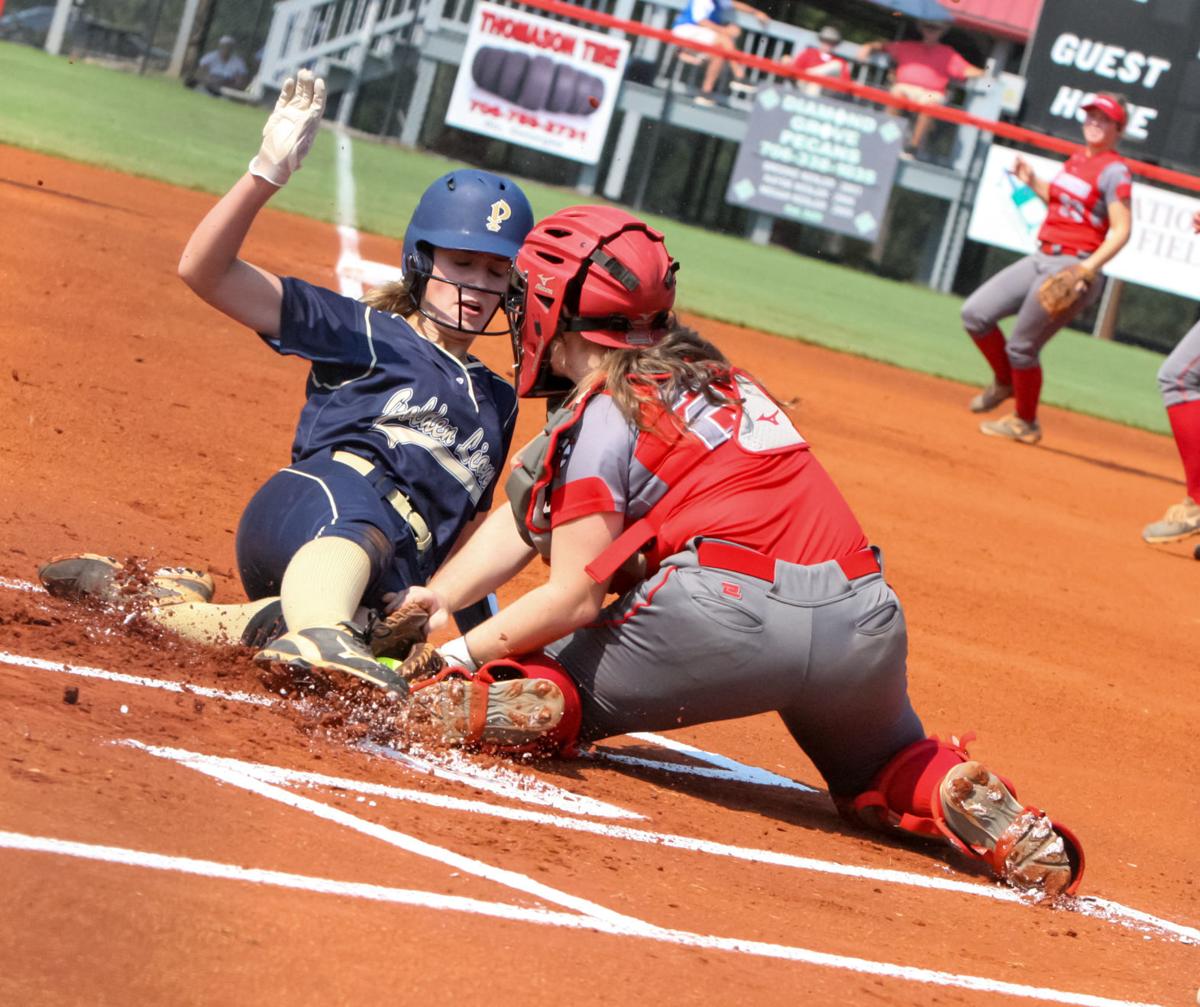 Gracie Nix tagged a St. Pius runner out before she reached home plate, keeping a run off the board in Madison County's win over the Golden Lions.

Gracie Nix tagged a St. Pius runner out before she reached home plate, keeping a run off the board in Madison County's win over the Golden Lions.

DANIELSVILLE – The Madison County softball team sealed their spot in Thursday evening's Region 8-4A Championship Game. Now they wait to find out their opponent.

DEALING WITH THE HEAT

The temperature Tuesday stayed above 90 degrees for most of the evening and remained hot even after the sunset. Head coach Ken Morgan recognized the challenge the team faced, but also didn't want the team to use the heat as an excuse.

"You have to get acclimated to it," Morgan said said. "We tried to keep them inside as much as possible, and keep them hydrated. They just had to rest.

"Our biggest thing is we don't want to make an excuse. It is what is, we all have to play in it. As long as they understand that and make no excuses about it, we'll be fine. It was tough on the arms, tough on pitchers who had to throw more than seven innings today."

If any player could've use heat as an excuse, it would have been catcher Gracie Nix. However, the junior loaded with extra padding overcame the heat and completed both games.

"If anyone is going to pass out from a heat stroke, she'd be the one," he said. "She works her tail off back there to block pitches and dig them out, and bouncing around, reading the defense, talking up the pitchers. All the little things Gracie does.

"Pitchers feel comfortable throwing to her, that's a big thing. They feel like they can throw any pitch any time and she's going to get them some strikes or block the ball."

Some players just can't be beat. Tuesday, those players were Emma Strickland and Laken Minish against Stephens County.

The two combined for seven hits on seven plate appearances with four RBIs and four runs scored. Minish also showed her range and speed in the outfield, while Strickland struck out five batters and only allowed one run in the Red Raiders' 10-1 victory.

"That was really good pitching, really good defense and we had some great, timely hits," Morgan said. "It was a fun night. It's the kind of night where you realize you've got a pretty good team.

Strickland retired 10 of the first 13 batters she faced and only one runner advanced past second base in that span. In the top of the fourth inning, Stephens County used a pair of two-out singles to load the bases. Strickland responded with a pop fly.

An error in the top of the fifth inning produced in the Indians' only run. The run scored on a two-out double. Stephens County put another runner in scoring position, but Strickland blew three strikes by the last batter to retire the side.

"Emma had her changeup tonight, kept them off balance," he said. "Balls put in play, we're making plays on them. They got runners on and we limited damage. Credit Emma there and our defense.

"She didn't have her screwball early. In the third inning, we sent her back to the pen to try to fix her screwball. She got that fixed so she was able to move the ball in and out. She spins the ball well, so she misses a lot of bats. You're not going to get many good chances to swing the bat against her. She's a really good high school pitcher."

Minish lived up to her reputation of being a tough out by being the toughest out of the entire game. She hit an infield single on her first at bat, sprinted to second base on a bad throw, stole third base and then scored on Ella Chancey's sacrifice fly ball to give the Raiders a 1-0 lead.

Still up 1-0, Minish returned to the plate in the bottom of the third inning and drove the ball out of the infield for a quick single. Rylee Ernst and Kennedy Dixon followed Minish with walks to load the bases. Minish and Ernst scored on Strickland's hard grounder into center field, extending the lead to 3-0.

She went to bat with two outs in the bottom of the fourth inning and doubled on a low pop up into shallow left field. Ernst walked again behind her and Chancey drove both speedsters home with a ground ball into left field. Madison County led 5-0.

"We've left a lot of runners on in a lot of other big games, but tonight we didn't," he said. "Tonight, we just kept scoring runs. That's the difference, we scored runs when they didn't. I know we had several big hits. We got the lead early and kept putting runs on the board."

Strickland led off the bottom of the fifth inning and she singled up the middle. Claire Strickland hit a line drive to left field. Emma Strickland's courtesy runner Riley Smith slid home on Skylar Minish's liner to left field.

Lexi Jordan walked to load the bases, putting Laken Minish in a unique situation for a slapper. Morgan gave her the green light to swing, and she swung away with a double to deep left field, driving home two runs, stretching the lead to 8-1. Gracie Nix checked in the game with Jordan and Minish in scoring position, she needed one pitch to drive both home. The 10-1 score ended the game early.

At the plate, the Red Raiders had 10 hits, with multi-hit outings for Laken Minish, Rylee Ernst Kennedy Dixon. Dixon’s three RBIs led the team while Minish and Ernst each had two runs each. Emma Strickland failed to get a hit, but she did drive in one run. Crane helped herself out with one hit for an RBI.

Minish and Ernst started the game with a walk and an infield single. Minish advanced to third on Ernst’s hit and scored on Ella Chancey’s sacrifice fly. Dixon doubled into left field, driving Ernst home and giving the Red Raiders a 2-0 lead in the first inning.

Up 3-0 in the third inning, Chancey led off with a single and sprinted to third on a throwing error. Crane’s two-out line drive brought Chancey home. Sklyar Minish drove courtesy runner Macey Echols home with a hard liner into centerfield, extending the lead to 5-0.

Minish and Ernst again got on base together to start the fourth inning. This time both had singles. Minish still wound up at third on Ernst’s hit. Dixon’s line-drive to left field brought both slappers in and Dixon jogged home on Emma Strickland’s pop fly at the warning track. Madison County led 8-0 after four innings.

St. Pius needed two runs to extend the game, and they put their first two batters on base. Then a line out, fielder’s choice and a ground out ended the game.

"Lily (Crane) did her job against St. Pius, shut them down," Morgan said. "Was able to get through their lineup and that really helped because of the heat. We needed to pitch one in each game and we had Claire (Strickland) in reserve to, so we were good with pitching.