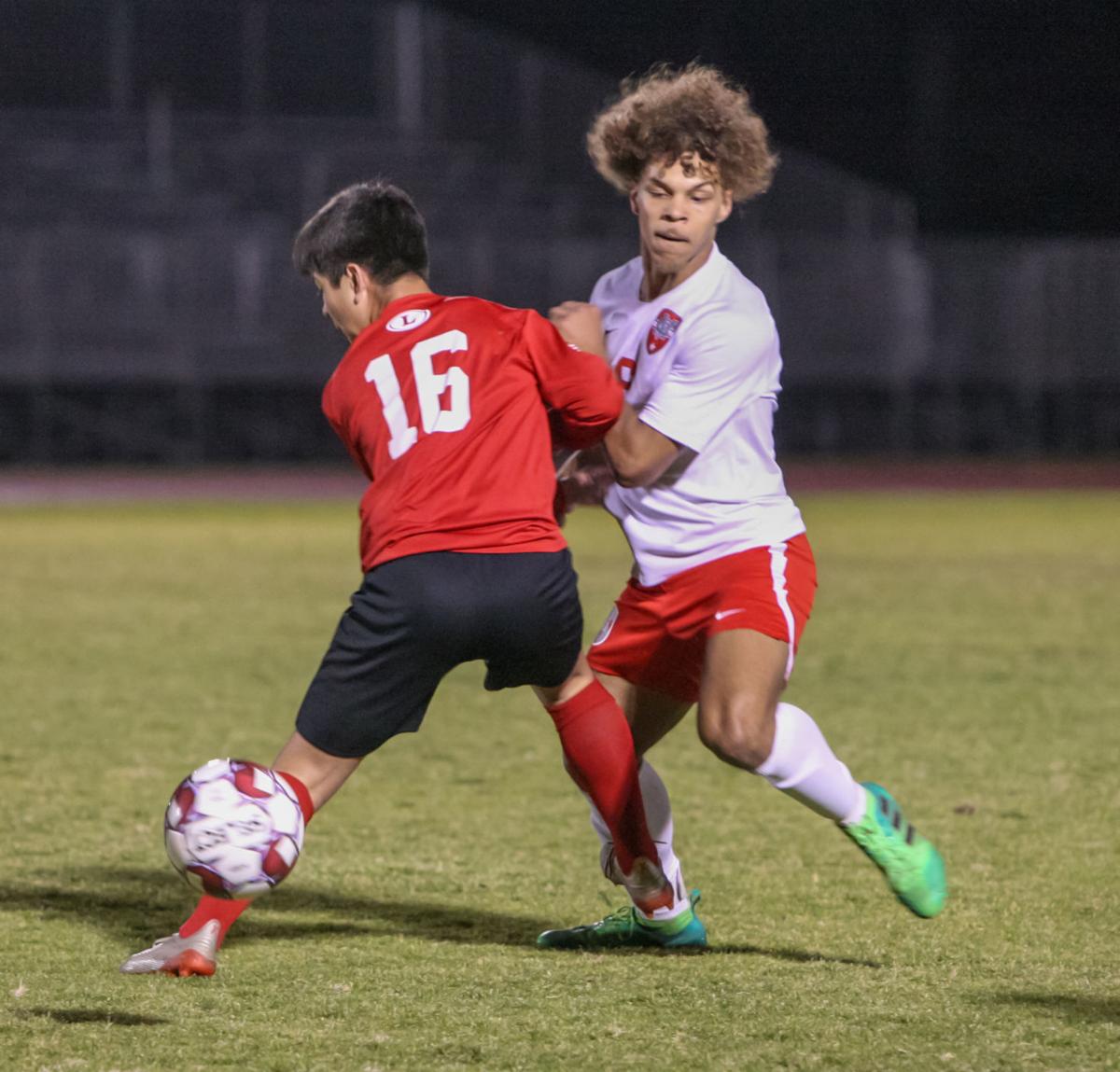 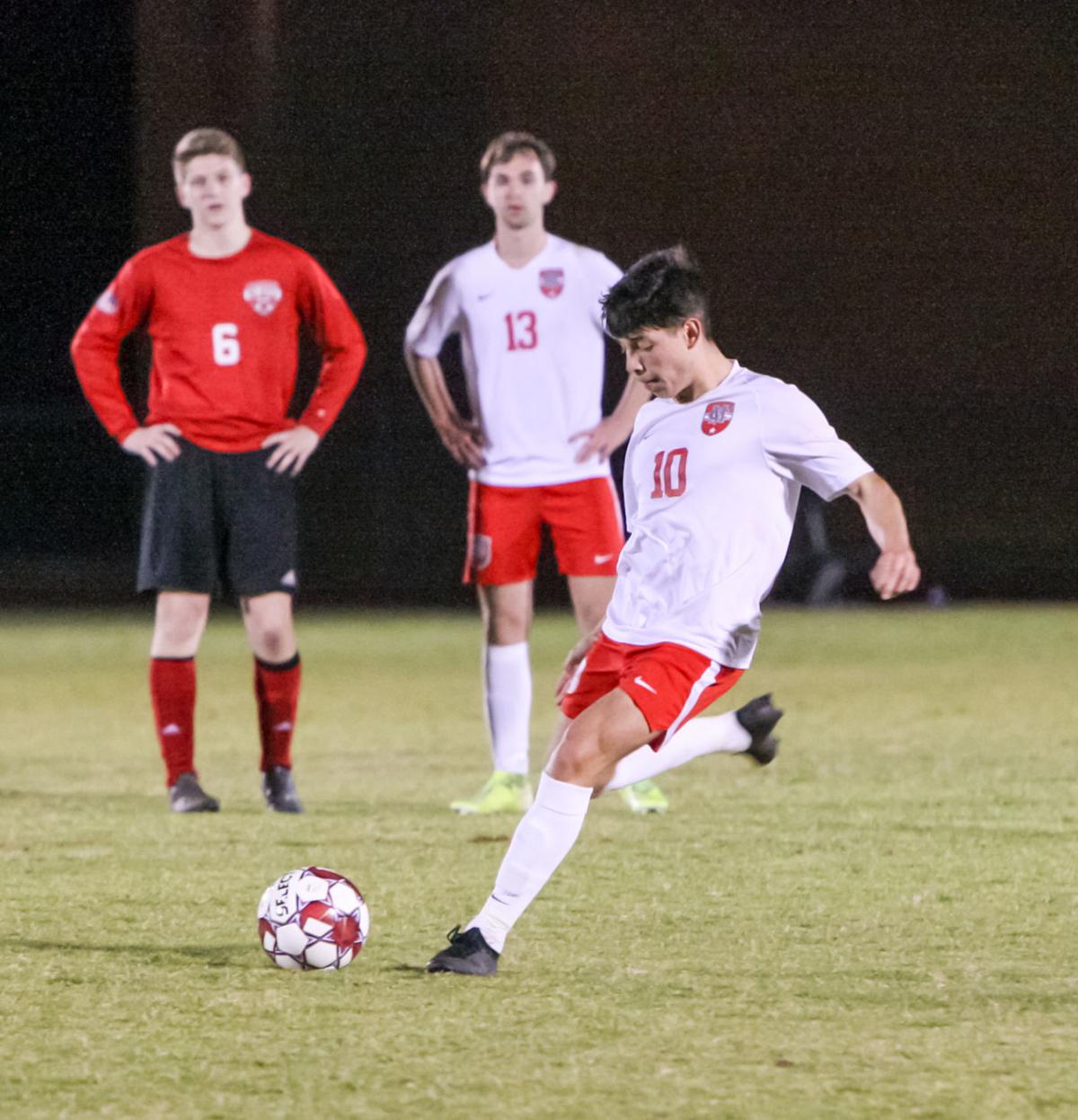 Eric Bravo attempts a free kick from near midfield Tuesday at Loganville. The kick reached the back of the net for Madison County's second goal in a 2-2 tie. 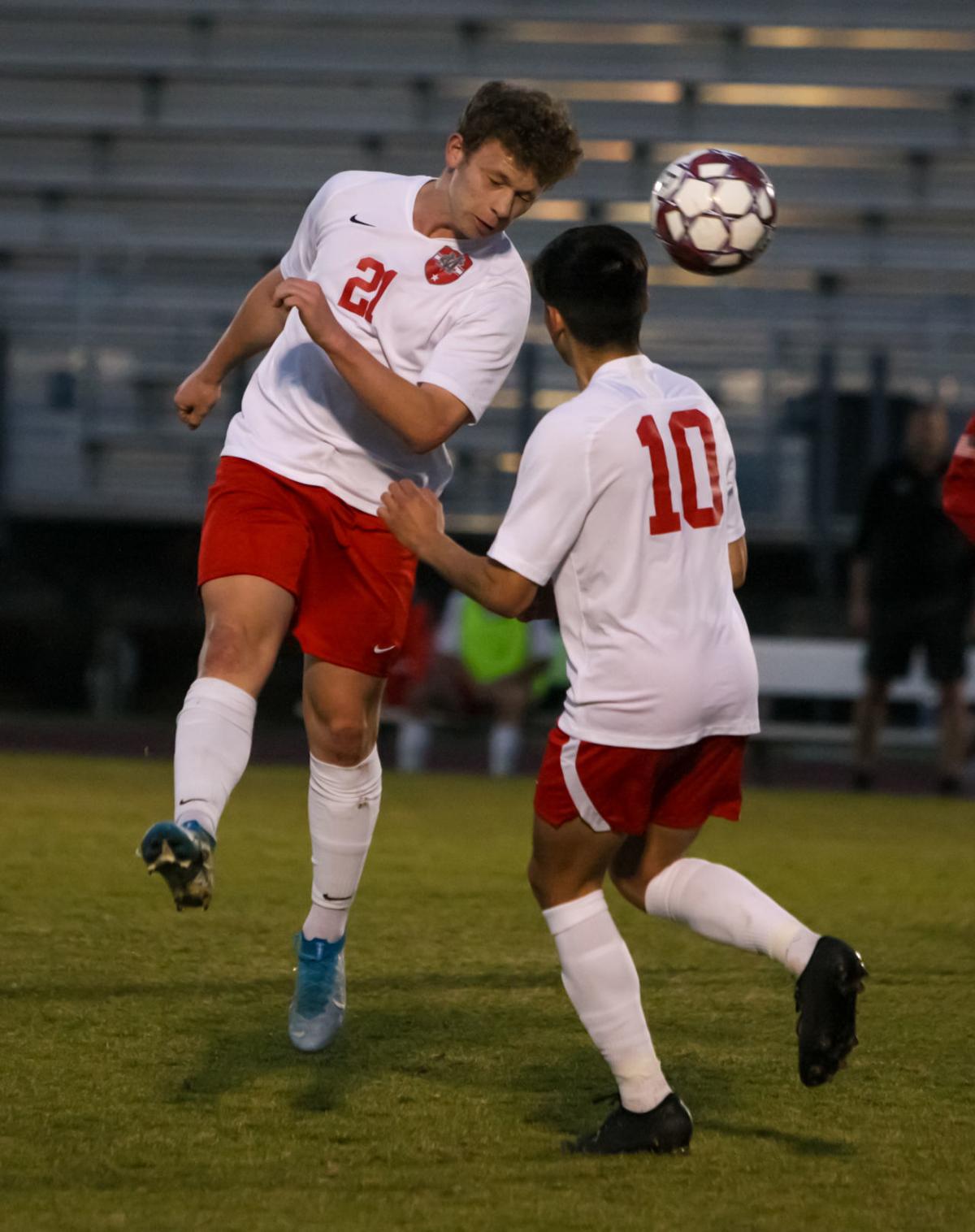 Eric Bravo attempts a free kick from near midfield Tuesday at Loganville. The kick reached the back of the net for Madison County's second goal in a 2-2 tie.

However, Madison County wasn’t able to leave Loganville with a victory this time. The Red Raiders conceded an equalizer at the 65th minute and neither team scored a go-ahead goal in the last 15 minutes. The draw comes on the heels of a long road trip to Jekyll Island where the Red Raiders competed in the Tournament of Champions.

“That Loganville team is good,” said head coach Jose Rodriguez. “They did what they do well for the first half and we adjusted. We did a lot this last weekend. We travelled a lot, and were off schedule. We made some simple adjustments in the second half and they paid off. We tied a game that I think we should have won.”

Both squads had ample opportunities to score in the first half and Madison County (3-3-3, 0-0-0 Region 8-AAAA) had the best attempt early on with a ball that bounced off the cross bar at the sixth minute. Thirty five minutes into the game, Loganville launched a nifty spinner from the corner of the box. The ball looked to be sailing wide until it took a dive and bounced off the bottom of the cross bar and into the net. The Red Devils took a 1-0 lead into the locker-room.

The Red Raiders came out of the break with much more energy thanks to the furious play of Jaemon Adkins. His play nearly paid off with a goal in the opening moments of the second half. Eventually, his play elevated the rest of the squad leading to Madison County’s equalizer in the 48th minute. Dylan Sudberry found Chris Finnegan in the middle of the field and Finnegan outran the defense towards the goal.

“Between the energy and the physicality, (Jaemon Adkins) brings a lot to the field,” Rodriguez said. “He did a heck of a job. He really helped us there. He didn’t necessarily involve himself in the play, but what he did was enough to propel us to that goal.

“It was a good goal. We’re rotating our strikers as much as we can. We just want to make sure they understand their roles and I think they do. Chris did a good job finding the gap. Dylan found him and Chris turned, he took them on with his speed and physicality and just tucked it away.”

Madison County took a 2-1 lead 10 minutes later when Eric Bravo launched a long free kick towards the frame. The ball careened off the cross bar and behind the keeper for a goal. The Red Raiders had chances to increase their lead in the following moments with several free kicks on Loganville’s half of the field. Despite getting good runs from Landon Dougherty behind the defense, the Red Raiders couldn’t find any more goals.

Loganville (2-5-1, 0-1-0 Region 8-AAAAA) made Madison County pay for its missed chances at the 65th minute when a shot from the right of the goal, found the good side of the left goal post. The goal knotted the score at 2-2. The Red Devils earned a free kick just outside the box with eight seconds on the clock, but keeper Kaleb Lee caught the shot to preserve the tie.

“It’s going to be tough,” Rodriguez said. “I love Alex Ventura (North Oconee head coach), he’s a great coach. One thing I respect about him is that I have to prepare tactically. They’ve won the games they should have won and lost to some very tough opponents.

“The winner of that game is the one who truly comes out with energy. It’s going to be a tough match, I don’t think it will be a blowout in any sense. The last team that scores I think will win the game.”

Madison County played a pair of games in the Tournament of Champions at Jekyll Island Thursday (March 6) and Friday (March 7). The Red Raiders started the tournament with a blowout loss to East Paulding and recovered to defeat Heritage 4-3.

“It was a lot of fun,” Rodriguez said. “The reason I love doing these trips is when I took over this program, one of my goals was to make sure we had in-season tournaments. You do in-season tournaments because you adjust them to the playoffs. Long travel, completely off schedule, playing a team that you’re never going to play in the regular season.

“I know the first game is going to always be tough because you’re completely off schedule. The boys are staying up later, having fun and joking around. Which is totally fine, this is a mental break for them as well, but it’s always difficult to step on the field and win.”