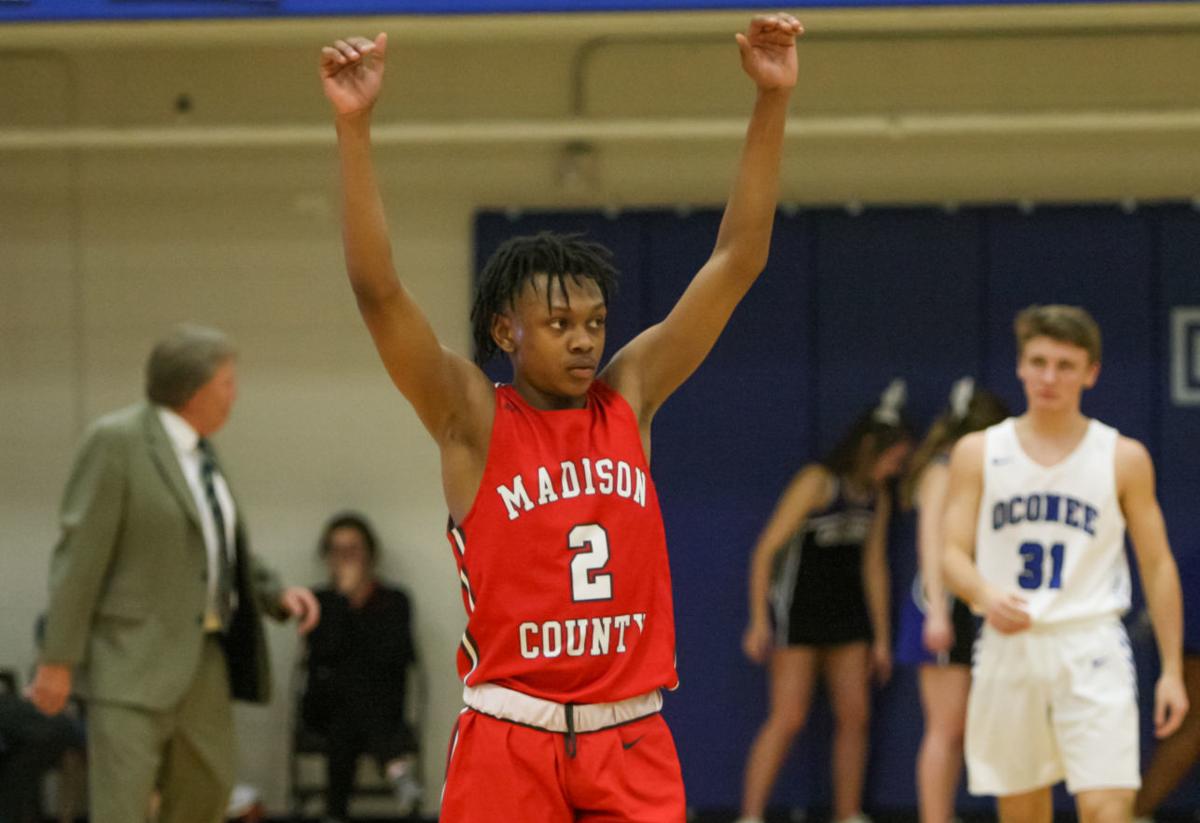 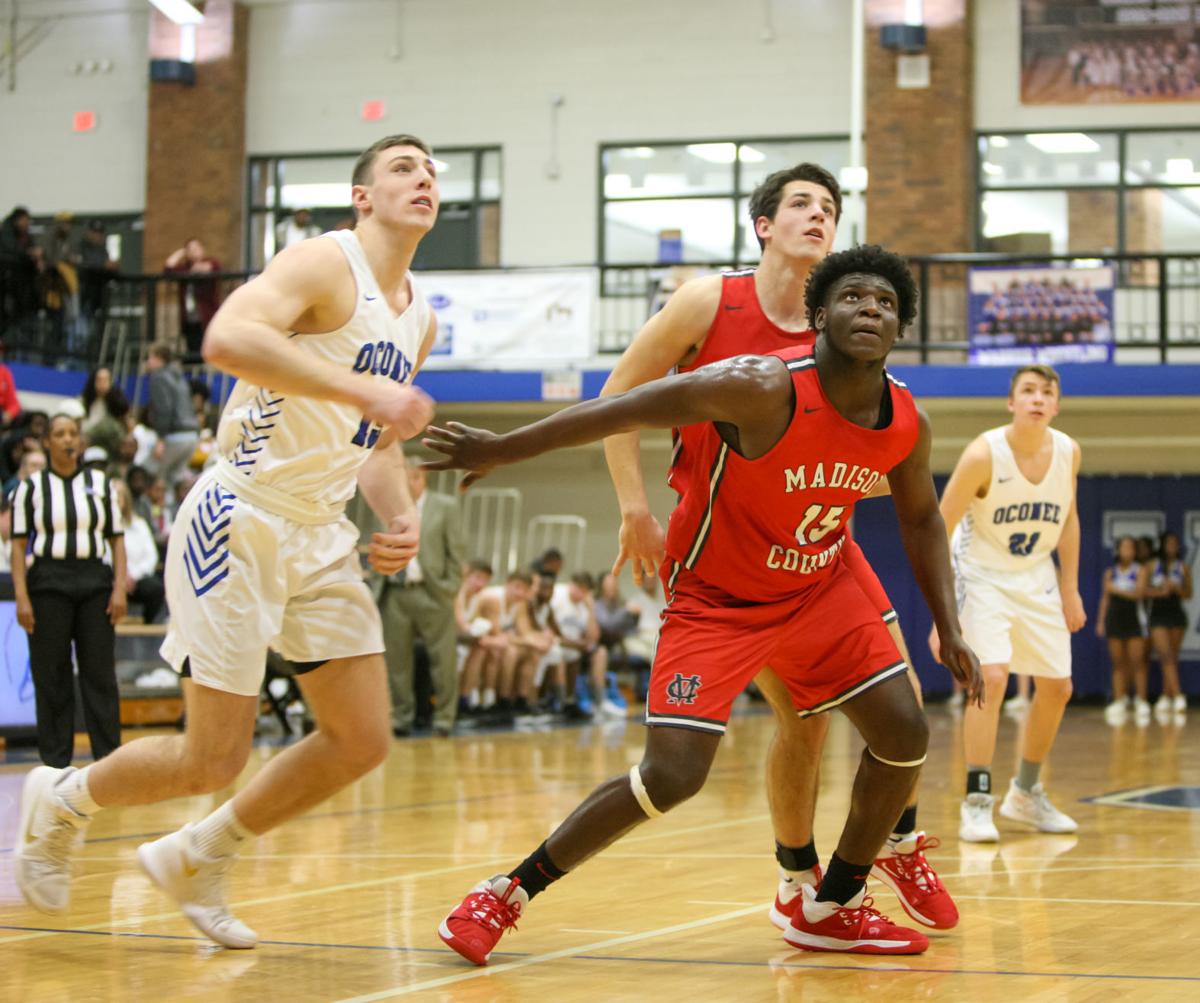 Zahmerius Shiflet goes for a rebound off a free throw against Oconee County. 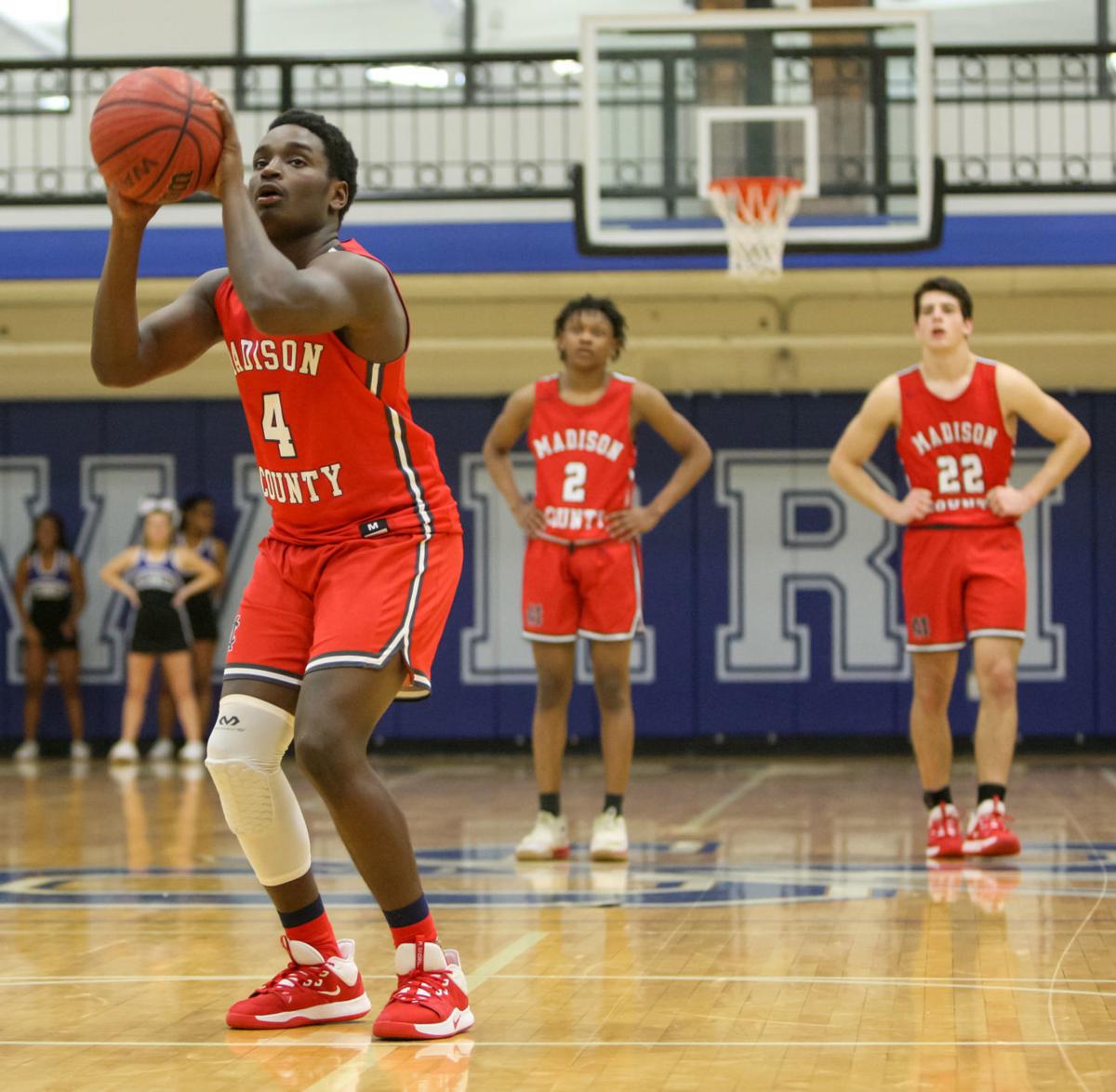 Zahmerius Shiflet goes for a rebound off a free throw against Oconee County.

WATKNISVILLE – Madison County can wind down the regular season comfortably with a win this Friday night.

One more win over North Oconee locks the Red Raiders into the No. 2 seed in the Region 8-AAAA Tournament and grants them a spot in the AAAA State Tournament. Madison County moved within striking distance of the goal with an 81-75 win Jan. 21 over Oconee County.

“There’s still a lot of basketball to play, there’s still a lot to get better at, but I’m so proud of them,” said head coach Bryan Bird. “We’ve been telling them since day one, our number-one goal is to be playing our best in February, and we’re getting there.”

Madison County’s current success in region play is made more impressive by its lack of experience heading into the season. Only Metts had played meaningful minutes before this season, yet, the team has grown up fast. One of the traits Bird likes most about the team is how well they play together.

“We’ve asked them to believe and keep grinding even though there’s been some tough times and right now, they’re doing some good things,” Bird said. “We’ve been telling them we want to be great teammates and that takes time. Not to say anybody’s selfish … It just takes time to jell together and learn how to play together.

“We preach and preach and preach to set your next man up on offense and be there for your teammate on defense. We’re starting to do a good job trusting our teammates. We had four people in double figures, almost five. That’s huge. I really love the way we’re playing together. I’ve told them, we’re only going to be playing our best if we do it together and they’re buying in. We’re proving it on the court so far.”

The Red Raiders jumped out to a 21-10 lead over Oconee County (14-8, 2-4 Region 8-AAAA). Four different players scored during the opening run with Metts leading the charge with seven points. The Warriors snapped the run late in the first quarter and carried their own run into the second quarter where they cut the score to 22-20 before Metts drained a three-pointer. Jones dropped in a layup and Griffeth launched his own three-pointer to burst the lead back to 30-22 midway through the quarter.

Madison County would take a 38-33 lead into halftime, but it came out swinging in the third quarter with a three-pointer by Griffeth, a free throw by Shiflet and another three by Metts to give Madison County a 45-33 lead. Oconee County cut the lead to 45-39, but Metts and Jones responded with consecutive three pointers to stretch the lead back to 51-39.

Oconee County answered with its own three-pointer before a lay in by Harrison Kirkland and a pair of free throws put the score back up to 54-42. The Warriors battled to cut the score to single digits again and this time Hill responded with five quick points to go back ahead 60-47.

The Red Raiders managed to hold on to the victory thanks to free throw shooting. They sunk 11 of their 16 foul shots, including five-straight by Hill and Jones to extend the lead to 77-70. Hill and Metts drained another pair each to put the game away in the last minute. Madison County won 81-75.

“Last year, we ended on a sour note with free throws in the state tournament,” Bird said. “We’ve tried to make that a point of emphasis to make sure we get more up this year. We don’t want to look back and say we lost games because of free throws. It’s not been perfect, but for a young team, we’ve done pretty well at the foul line. Especially in late games in the region, we’ve been clutch.

“We didn’t play perfect, but we played great together and finished it out tonight. I’m so proud of the way they finished. We haven’t had a lot of experience playing with the lead closely so far, this year. They did a good job taking those punches from Oconee, because they didn’t quit. They came back, and we responded every time.”